It has been miserably hot of late, with the daily temperature routinely getting up into the thirties, not conducive to long walks, unfortunately. As a consequence this post will be a bit of a mixed bag of sightings around the backyard, in the house, and a few items from farther afield.

Eastern Cottontail (Sylvilagus floridanus), the arch invader of the garden, is both a delight and a menace, and is extremely common. These creatures, whose life span seldom exceeds six to eight months, rarely one year, are susceptible to all manner of diseases, and harbour a full suite of endo and ecto parasites, and in addition face a formidable array of predators, both terrestrial and aerial.
Cottontails contract a range of occular surface diseases, and this individual, a regular visitor, appears to have a cataract in one eye. 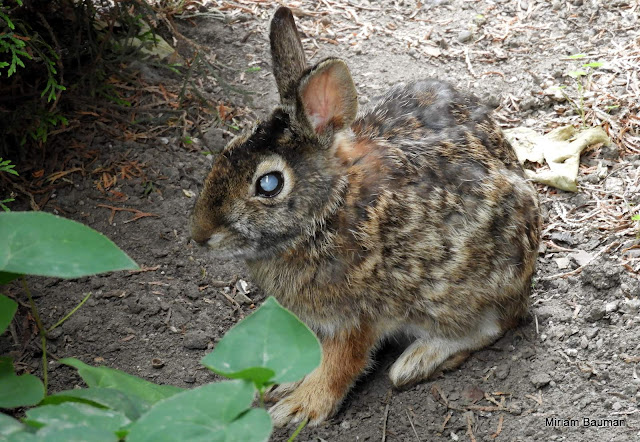 It does not seem to have affected its ability to forage and even with one operative eye it unerringly finds the plants Miriam would least like it to chew upon. 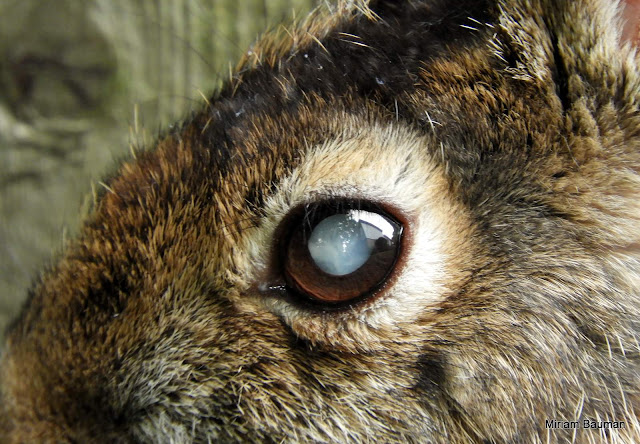 Woe betide it, however, when a cunning fox comes up on its blind side!
For several years now we have raised butterflies inside the house, with an undiminished fascination for observing the transformation from egg to caterpillar, to chrysalis, and finally a beautiful butterfly.
Here are two companions, both feeding on Rue (Ruta graveolens), safe from the elements, and more significantly from winged predators of many types. Black Swallowtail (Papilio polyxenes) is at the left, nose-to-nose, so to speak, with Giant Swallowtail (Papilio cresphontes) at the right. 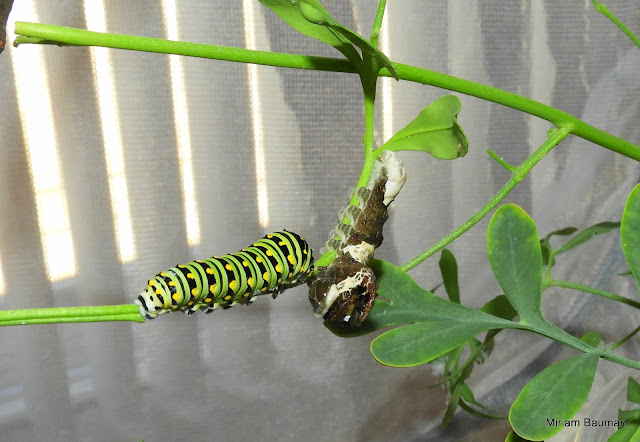 Miriam and I were outside looking at another half dozen caterpillars or so on the Rue, debating whether we should bring them into the safety of the house, all the while recognizing that these larvae are an important food source for birds and other insects. Our minds were made up for us, in short order, as several European Paper Wasps (Polistes dominula) swarmed the plant, and immobilized the caterpillars with their sting, and feasted on them. 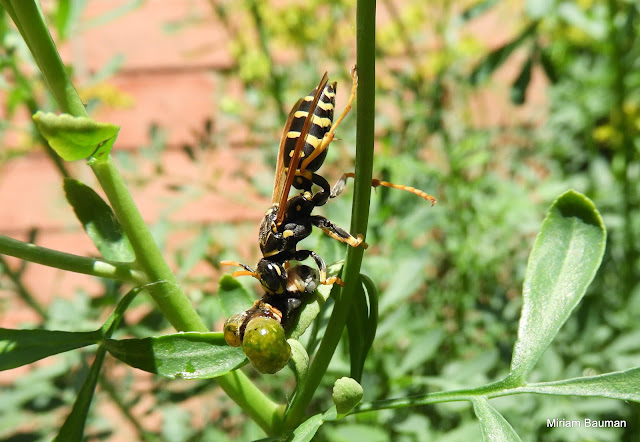 Most caterpillars do not survive, of course, and songbirds would be unable to raise their young without this spring flush of protein. 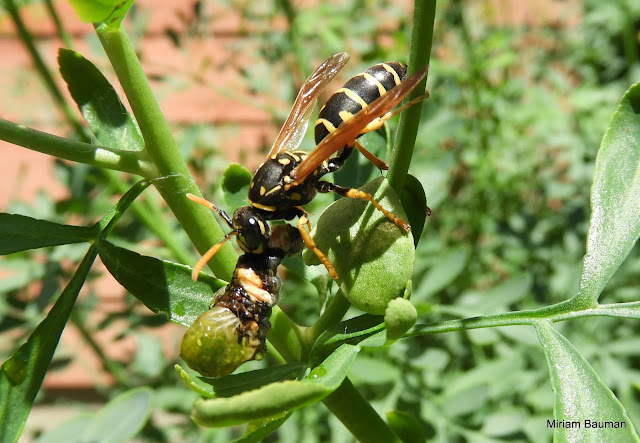 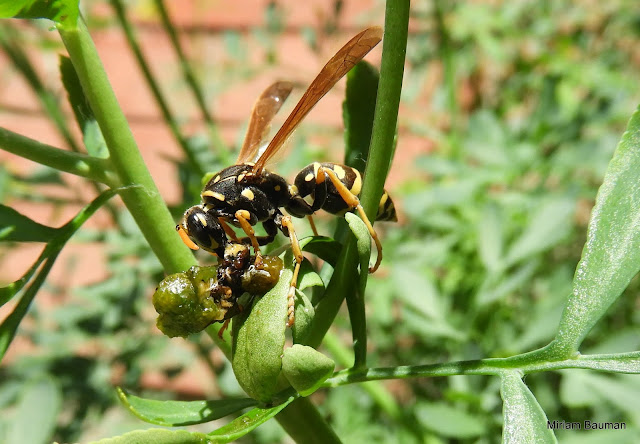 Less desirable are Gypsy Moth (Lymantria dispar) caterpillars, which have appeared in profusion this year, and are capable of inflicting serious damage to a range of native deciduous trees. 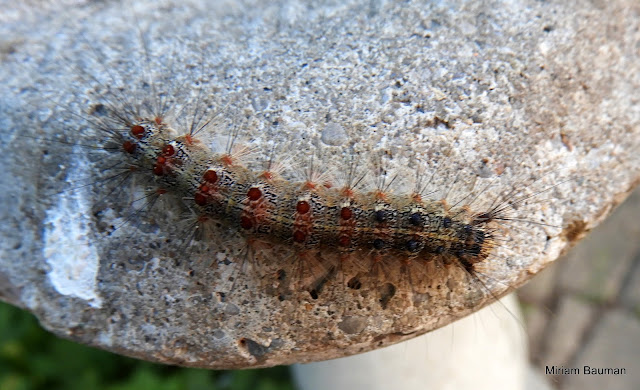 Foolishly, this species was deliberately introduced into North America in 1868-69 and threatens our forests. Many have found their way into our yard, where we destroy them. 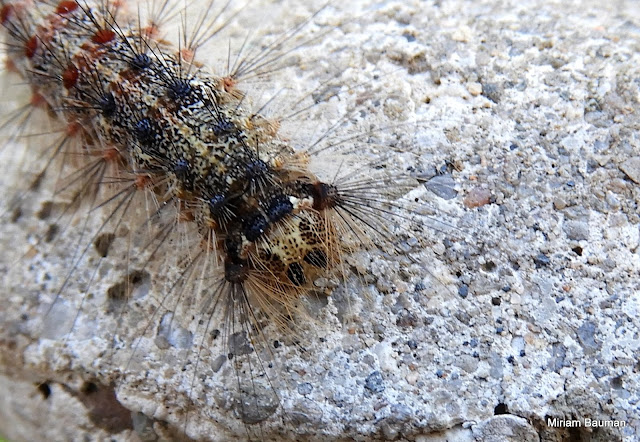 Their spiny body makes them unappealing to most birds and other potential enemies.
A male Cabbage White (Pieris rapae) nectaring on Salvia is not threatening at all. 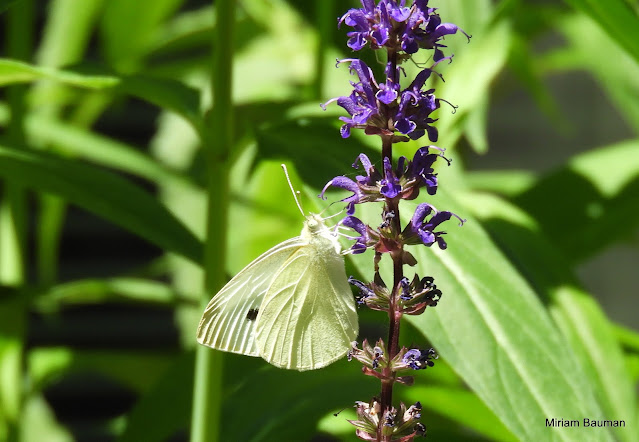 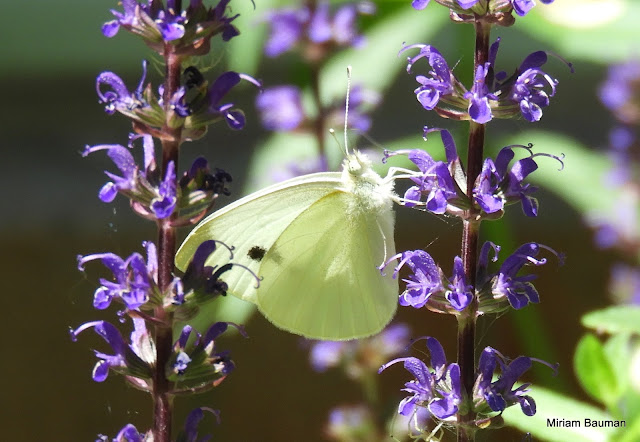 There was a bumper crop of Paeonies (Paeoniceae) this year and Miriam brought the final few into the house. 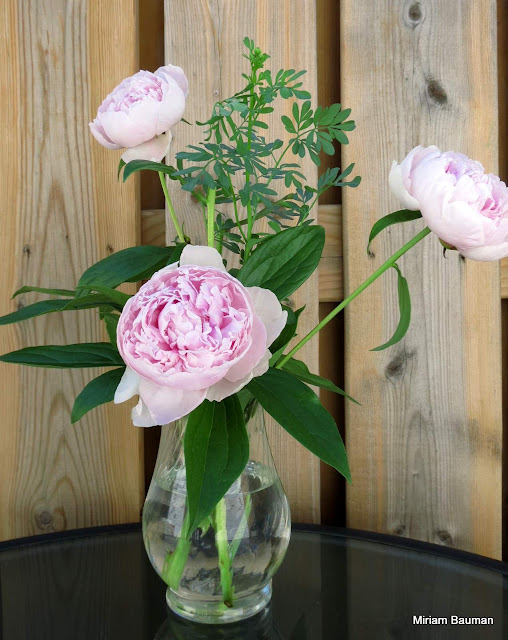 Several juvenile American Robins (Turdus migratorius) have appeared in the backyard as they leave the nest, sometimes accompanied by an adult but more frequently alone as they embark on an independent life.
It was apparent that one young bird was in trouble. It panted frequently, its wings drooped and it had a noticeable tremor. I do not know whether some form of pathogen affected this bird or whether it was carrying a lethal load of parasites, but it succumbed overnight and was found dead the next morning. 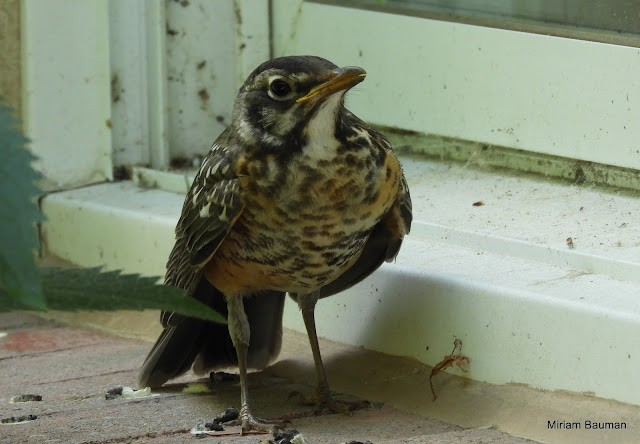 It is always sad to see a young bird not live to fulfill its potential, but life in the wild is neither easy nor predictable. 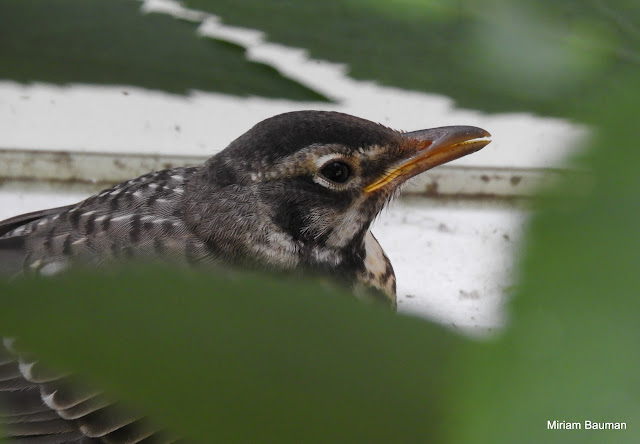 The Mourning Dove (Zenaida macroura) below seemed to be engaged in some kind of feather maintenance activity, either anting or soaking up UV rays. 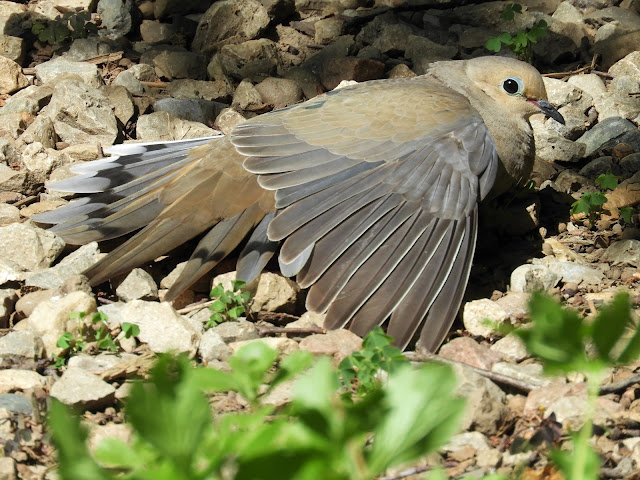 Our Butterfly Milkweed (Asclepias tuberosa) has done exceptionally well this year, and provides a burst of colour at the front of the house. 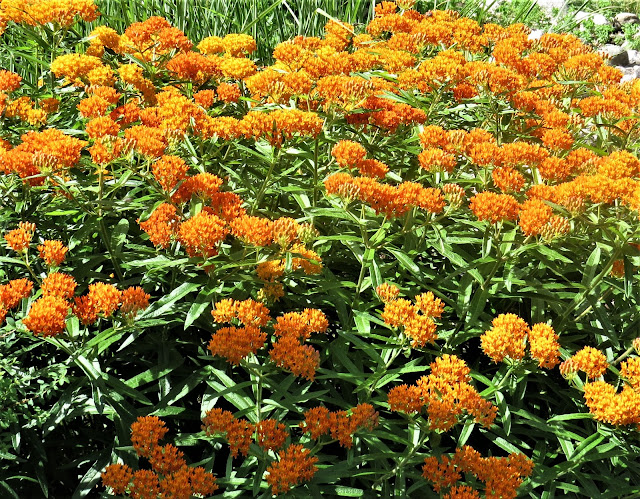 Despite its name, we have never seen a butterfly on it, although it does not lack for other pollinators. 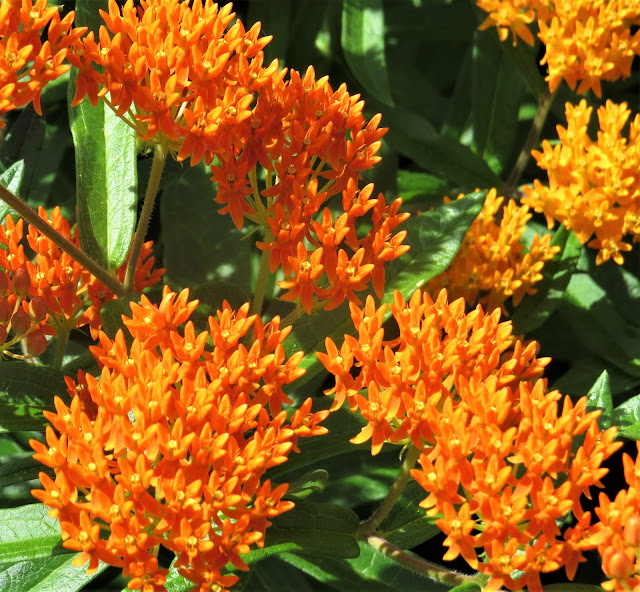 It is by any measure a beautiful plant and has fortunately escaped the attention of the rabbits.
At SpruceHaven this year we have not been able to do any serious monitoring of the Barn Swallows (Hirundo rustica) as the Coronavirus put an end to team work and cooperative effort, but the colony appears to be prospering. 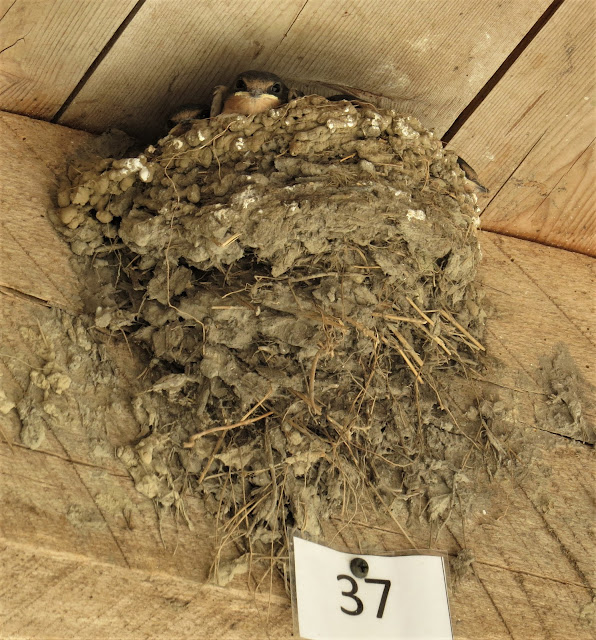 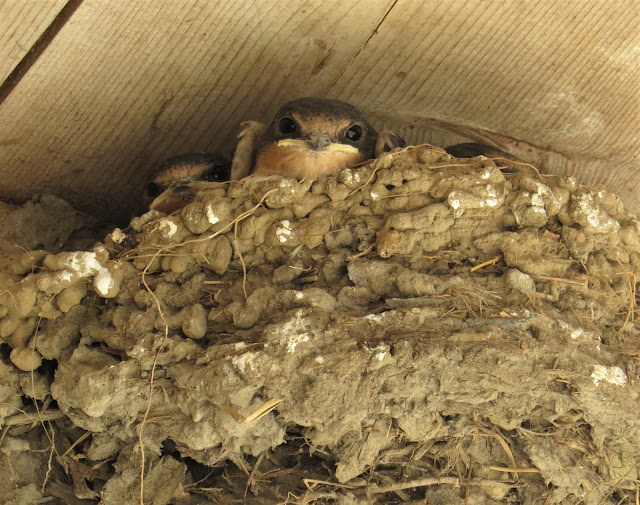 Fairly early in their development the nestlings learn to orient their rear ends to excrete over the lip of the nest, so an easy way to know which nests have active young is to follow the piles of poop building up beneath them. 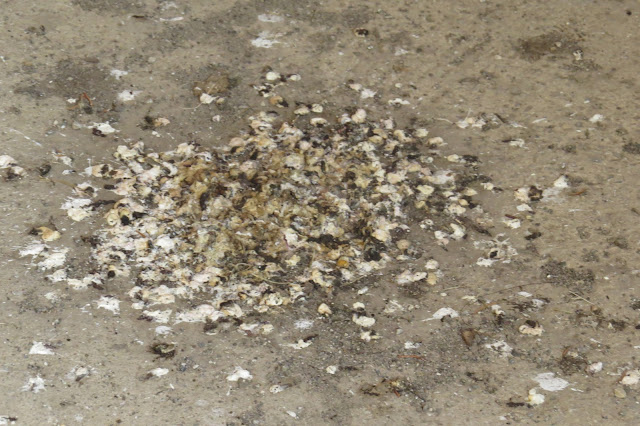 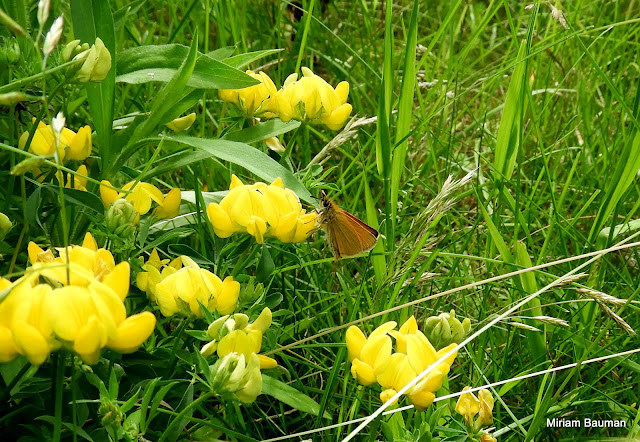 Several Pearl Crescents (Phyciodes tharos) were flitting around; finally one came to rest and we were able to get a picture. 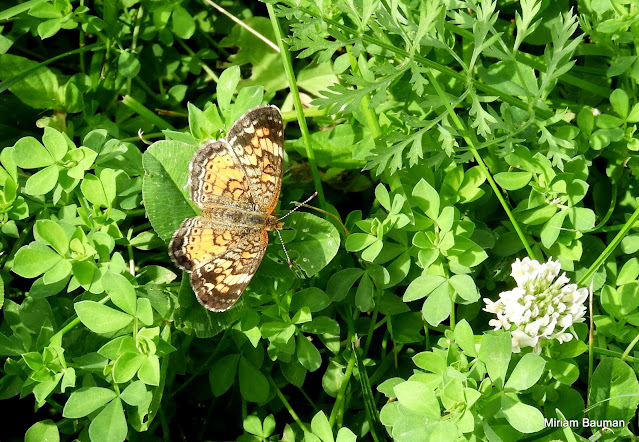 This period has also been marked by upgrading from Windows 7 to Windows 10 on a brand new computer. Nothing has the capacity to make me nervous more than computer issues and we owe a great debt of gratitude to Jeremy Faulkner of Nerds on Site for making the transition seamless and worry-free.
We had always used Picasa for our photo editing and were very familiar with its ease of operation. It was at the apex of user-friendliness. However, it was discontinued some years ago and is no longer available for download, so on Jeremy's advice we switched to digiKam. After some initial consternation, and a great deal of perseverance from Miriam, we (insert "she") navigated our way through it, and are becoming more comfortable with repeated use.
Adding a watermark to a photograph seems inordinately complicated, however, and we will eschew this feature for now. I am not quite sure why amateurs like us need a watermark anyway.
Posted by David M. Gascoigne, at 13:48