On a visit to SpruceHaven two days ago, where both Barn Swallows (Hirundo rustica) and Tree Swallows (Tachycineta bicolor) have had a very successful breeding season, I was astonished to find an American Cliff Swallow (Petrochelidon pyrrhonota) busily engaged building a nest inside the barn. 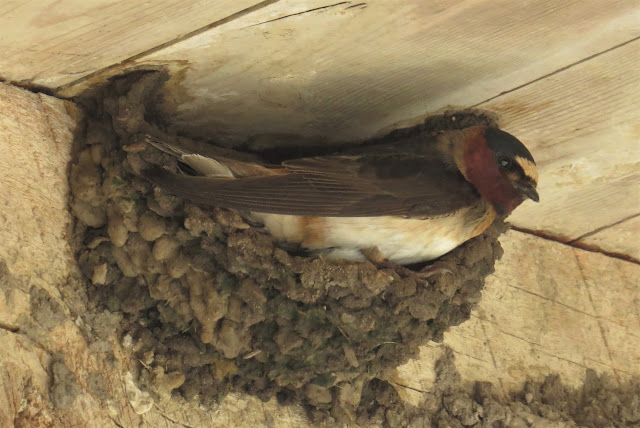 My astonishment was triggered by two aspects of this behaviour, firstly that new nest construction is underway in mid July, and secondly that the nest is being built in a very active Barn Swallow colony. This is the first ever nest of Cliff Swallow at SpruceHaven, and the first record of this species there.  If it has previously passed through on migration, it has been unrecorded.
American Cliff Swallows usually nest on the outside of buildings, but frequently the surfaces are deliberately rendered unusable, such as by spraying silicone for example, to prevent the nest from adhering. Large colonies are found under bridges, but as old bridges are renovated or replaced, ancient colonies are destroyed. This happened at the Fountain Street bridge in Cambridge which was closed for a couple of years for major repairs. A colony that I watched for years disappeared. 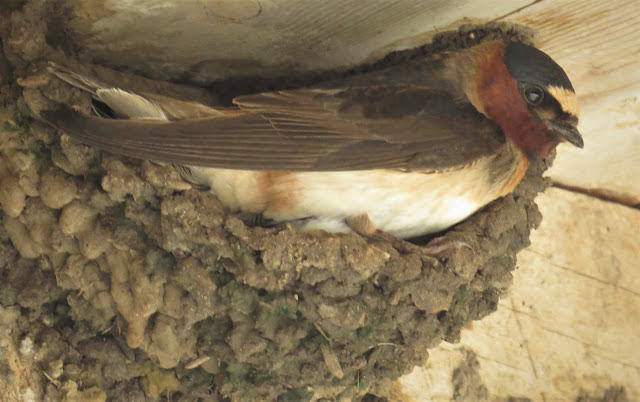 The species is not doing well, so it was especially encouraging to witness a new nest under construction. Cliff Swallow is a colonial species, but there obviously has to be a first nest to start a colony, so perhaps by next year others may join. The prospect of a mixed colony of Barn and Cliff Swallows is heady stuff indeed. 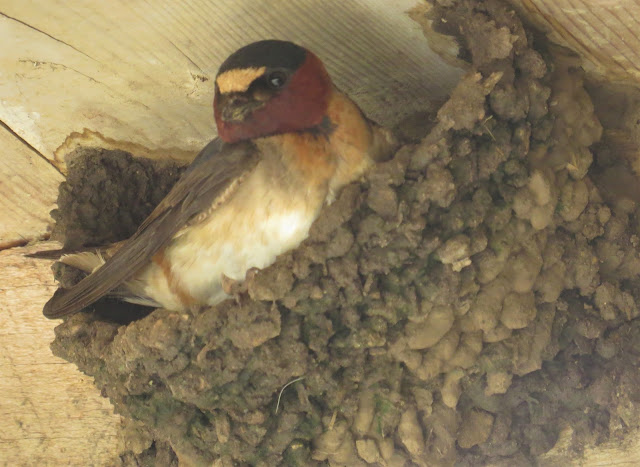 I am left, as I so often am, with a profound sense of privilege to monitor the wildlife at SpruceHaven. It is as exciting an opportunity as a naturalist could wish for.
The grassland restoration is coming along wonderfully and in my next post you will be able to see the wonders that are happening there. If only pictures would download and edit themselves!
Posted by David M. Gascoigne, at 11:00