My daughter, Caroline, was visiting from Ottawa and we decided that RIM Park would be a perfect spot for our Tuesday ramble. When Caroline's two boys, Sam and Will, were little they would come and stay with us for a week in the summer and RIM Park was one of their favourite places to walk. Caroline had never been there so the opportunity seemed perfect. 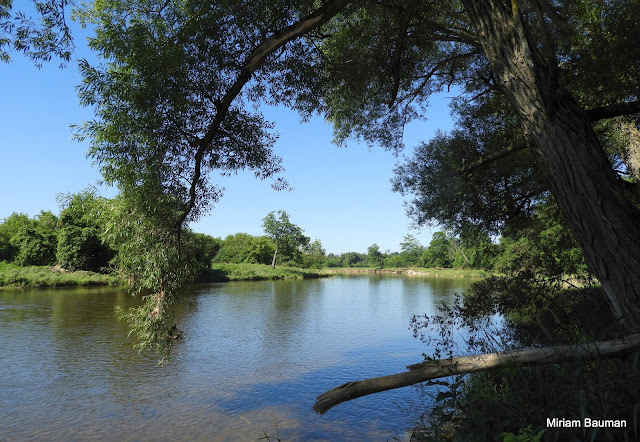 All the members of our regular group were there, except for Mary who is away camping. Miriam took a picture of the group, minus herself, of course. 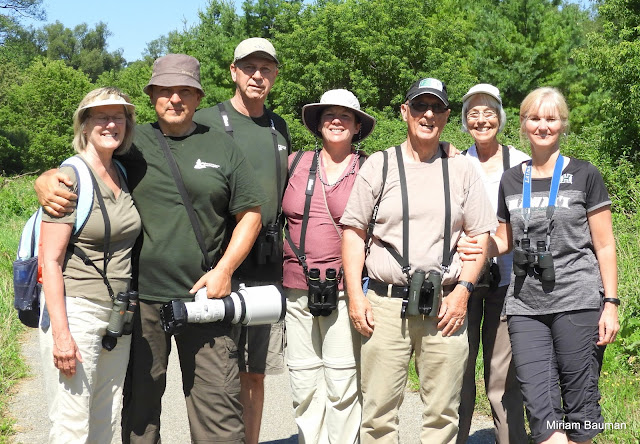 Then she took one of Caroline with her dad. 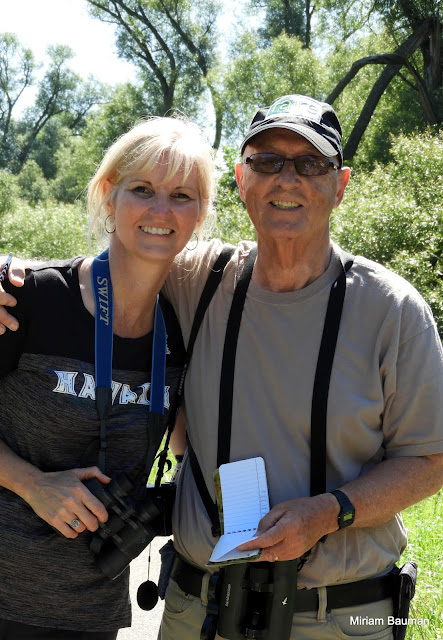 I am sure that you can all see where she gets her good looks!
Quite often Francine has a bird that she especially wants to see, and it is amazing how often, right after she mentions it, we are able to find one for her. This week her wish was for Great Crested Flycatcher (Myiarchus crinitus) and Franc was photographing it within minutes. 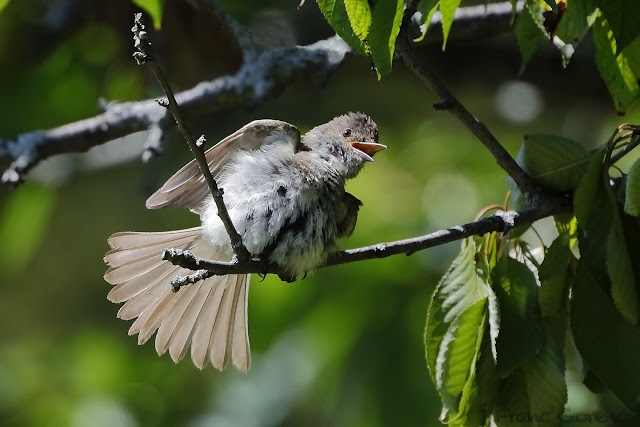 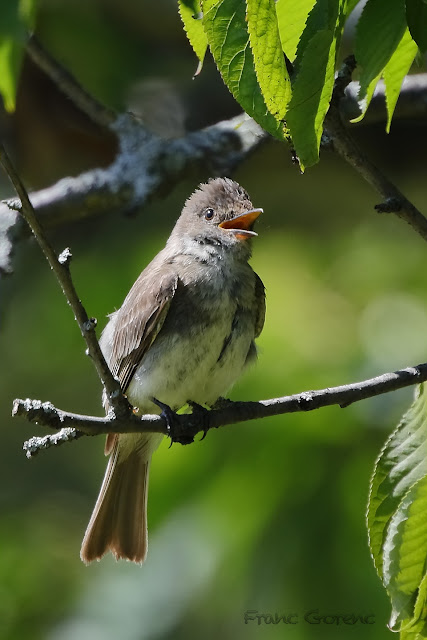 Shortly afterwards we saw what I initially identified as a female Rose-breasted Grosbeak (Pheucticus ludovicianus). 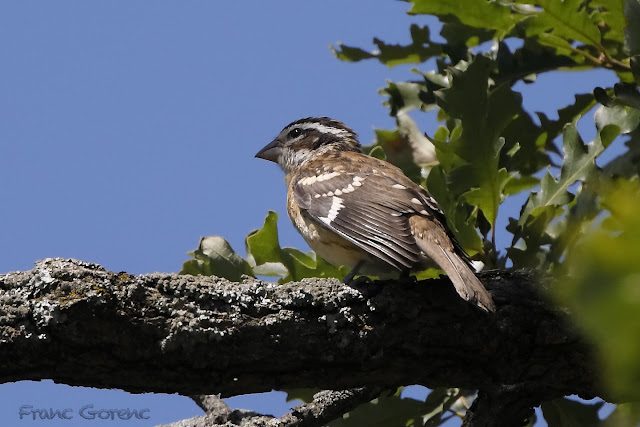 Upon close examination of Franc's pictures, however, the bird is clearly a juvenile male, as evidenced by the distinctive red underwing coverts seen below. 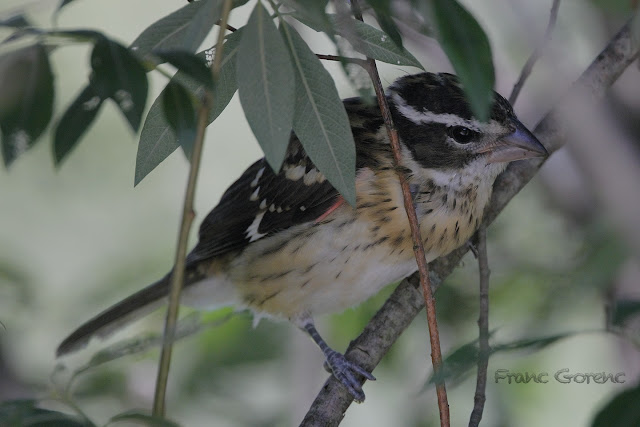 As might be expected along the river, we saw several Great Blue Herons (Ardea herodias), this one balancing itself in a tree. 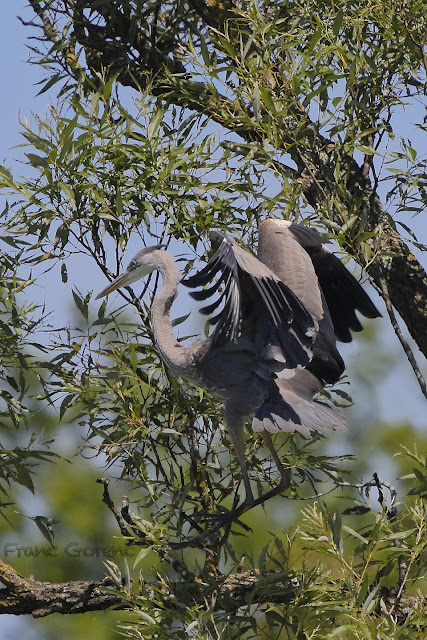 Green Heron (Butorides virescens) is usually not as prominent as Great Blue Heron and requires a little more persistence and patience to get a good picture - the hallmarks of a good photographer, of course. 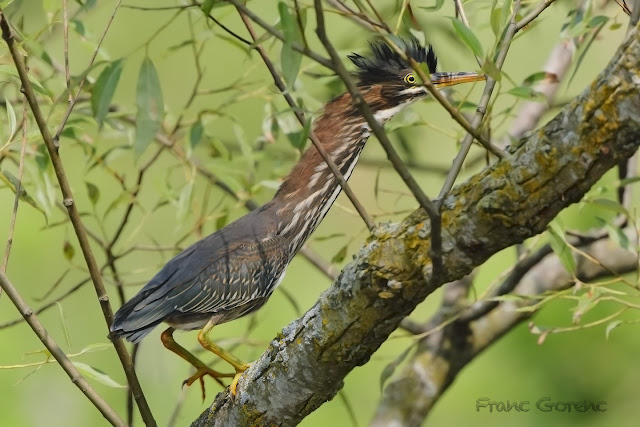 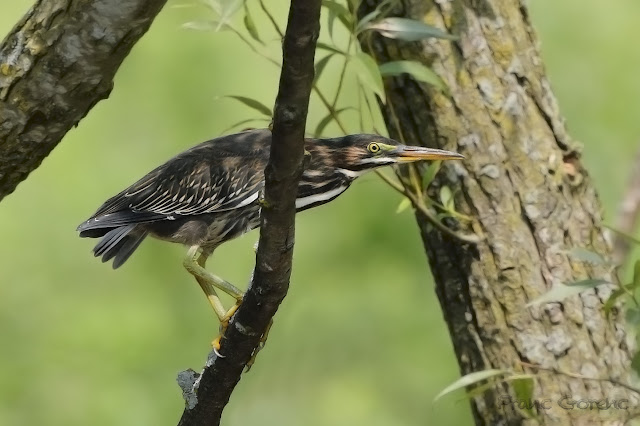 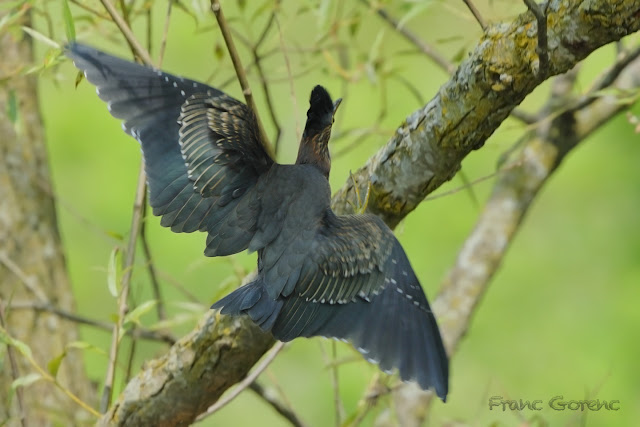 Cedar Waxwings (Bombycilla cedrorum) were seldom out of sight as they were flycatching over the river, finding rich pickings in the abundant swarms of insects darting over the water. 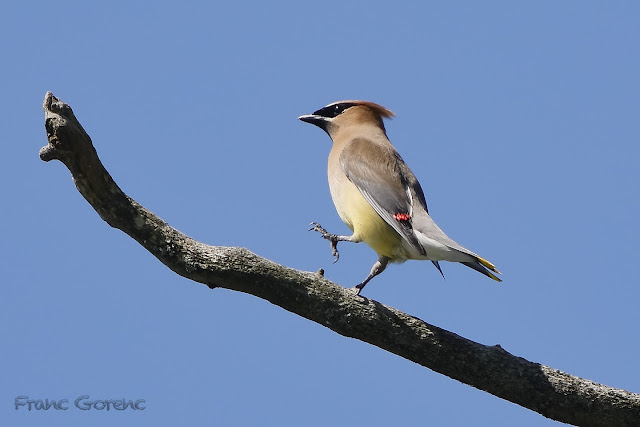 There were relatively few gulls, but a Ring-billed Gull (Larus delawarensis) and an American Herring Gull (Larus smithsonianus) were taking turns perching on the same rock. 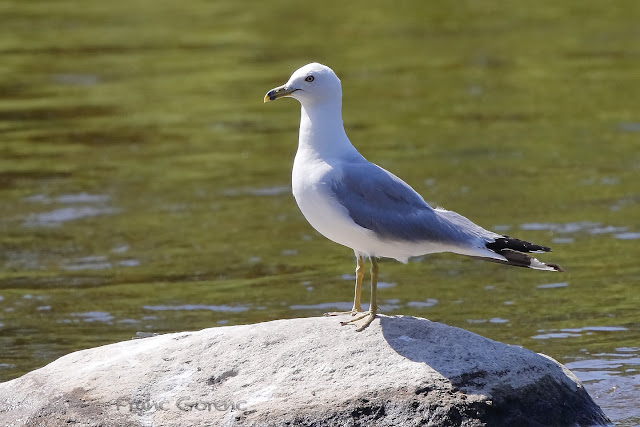 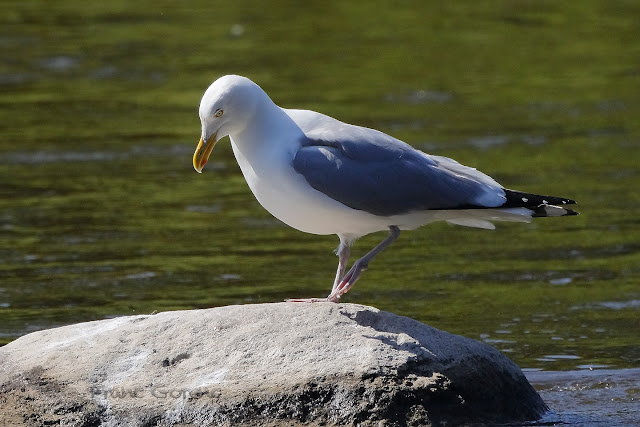 There is a substantial population of White-tailed Deer (Odocoileus virginianus) in the Grand River watershed, but they are primarily nocturnal or crepuscular in their habits. Recently we have been seeing them during daylight hours, but always across the river. Perhaps having the water as a barrier gives them more confidence to come out during the day. 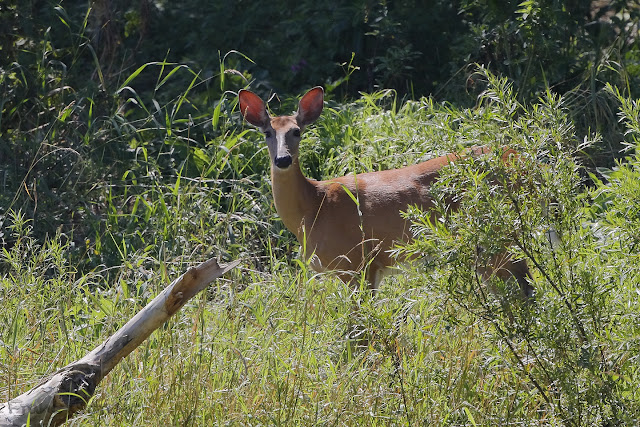 Miriam was not behind the camera for this shot of the female component of the group. Looks to me like they are just having too much fun! 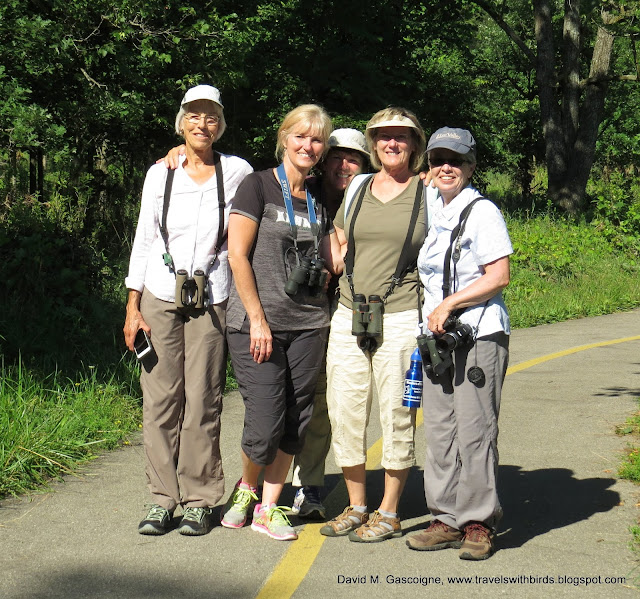 A Grey Squirrel (Sciurus carolinensis) seemed totally uninterested in everything going on around it and concentrated on a tasty snack. 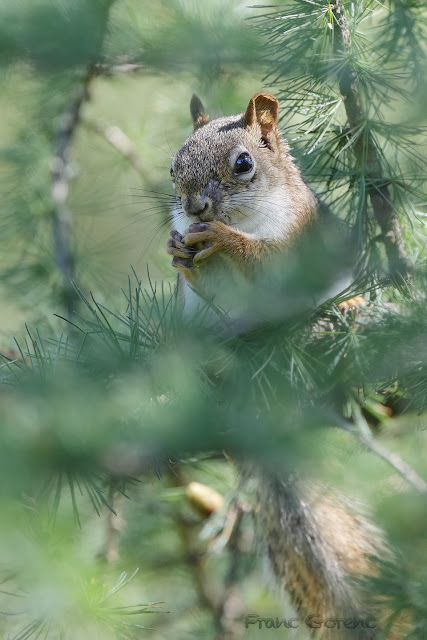 We saw three Belted Kingfishers (Megaceryle alcyon) in all, usually perched on a branch in deep shade, or too far off for a decent picture, but this female was finally a little more obliging. 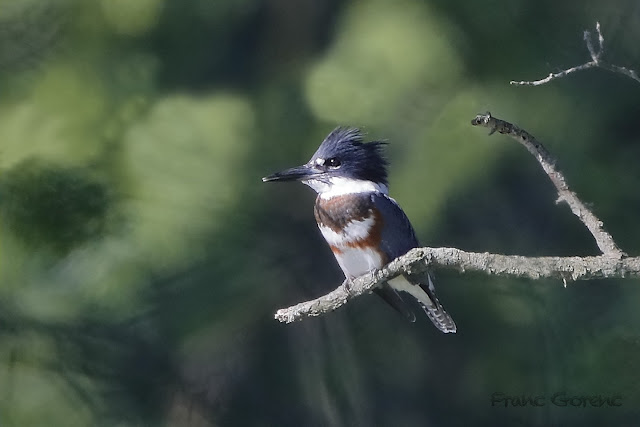 And the icing on the cake for Francine was yet another Great Crested Flycatcher. 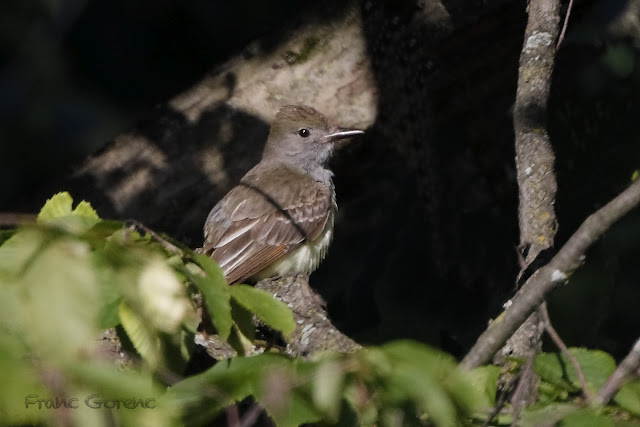 The familiar witchety song of the Common Yellowthroat (Geothlypis trichas) was frequently heard, although the bird was seldom seen. This male was the exception. 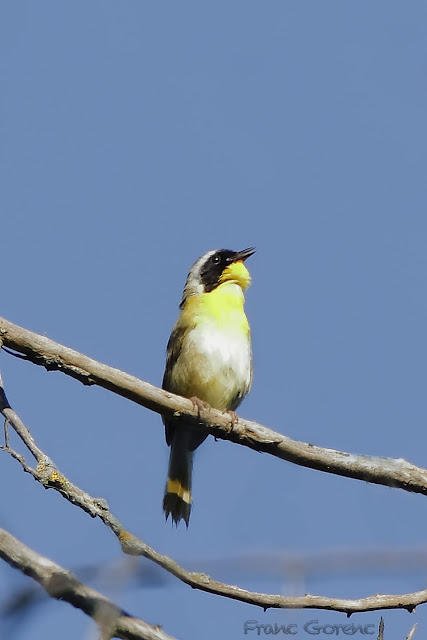 Based on our observations Downy Woodpeckers (Dryobates pubescens) seem to have had a prolific year and this juvenile male is one of many young woodpeckers we have recently seen. 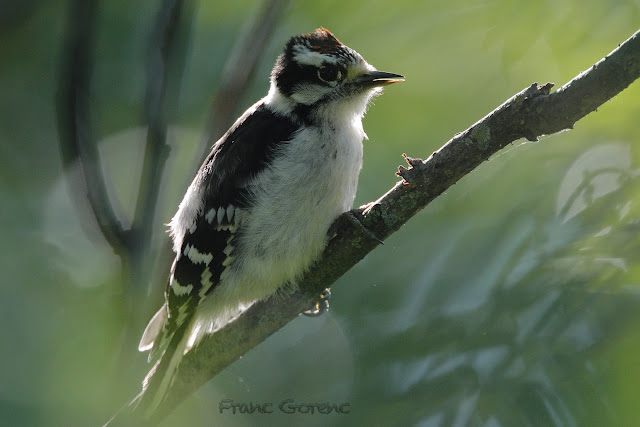 A juvenile male Northern Flicker (Colaptes auratus) is evidence of the breeding success of another species of woodpecker. 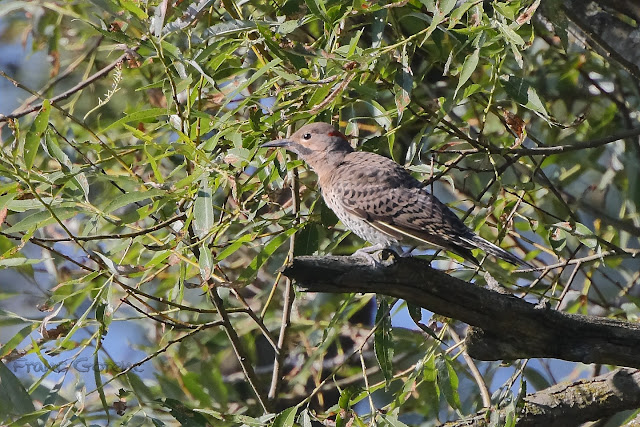 There is a good deal of suitable habitat for Eastern Kingbird (Tyrannus tyrannus) and I had seen a couple of families feeding young on a visit to RIM Park just two days earlier with an undergraduate student from the University of Waterloo I am mentoring. Today we saw only adults as far as I recall. 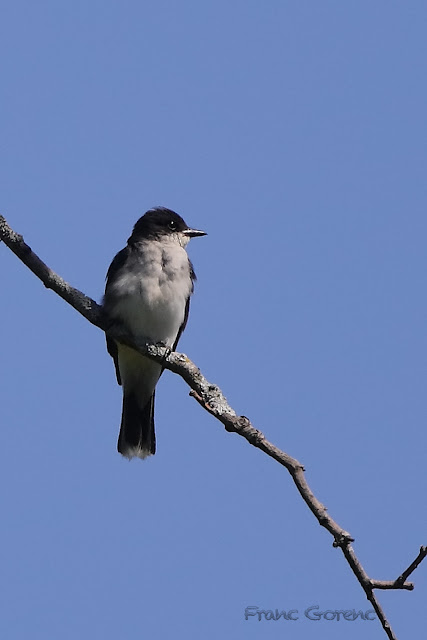 We did, however, encounter a juvenile Eastern Phoebe (Sayornis phoebe), another common summer breeder in the family of tyrant flycatchers. 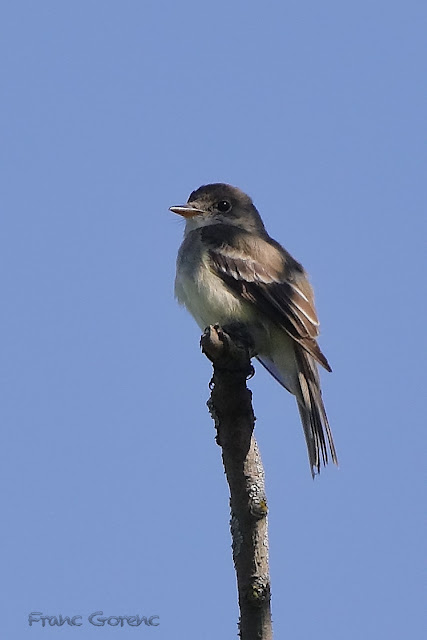 A Swamp Sparrow (Melospiza georgiana) represented my first sighting of this species at RIM Park. 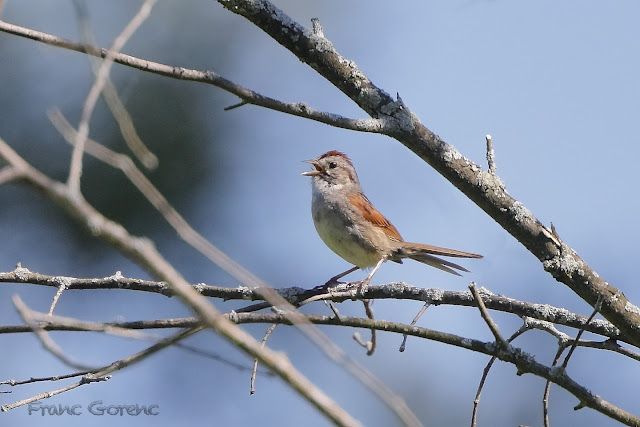 The weather was perfect, the birds numerous, and the company of the very best kind. Caroline could not have wished for a more enjoyable walk and she enthused about it for the rest of her stay.

Jim and Francine invited us to drop by for one of their legendary breakfasts. Franc was able to join us too, although Carol was babysitting her grandson and had to pass.
When we arrived at 09:30 the table was set beneath a large tree in their beautiful garden. 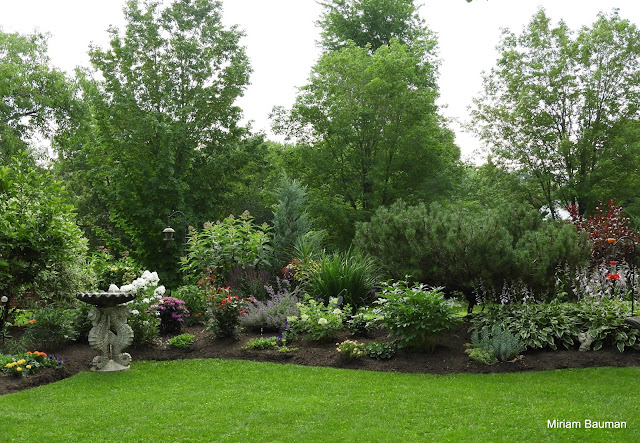 When Jim and Francine say breakfast, what they really mean is a feast of mythical proportions. To celebrate Caroline's presence we started with mimosas (Champagne and orange juice) - then there were croissants, muffins, toast, coffee, fresh fruit, cheese, jams, eggs cooked to order, sausages, bacon, home fried potatoes, baked beans - and more than anyone could eat! 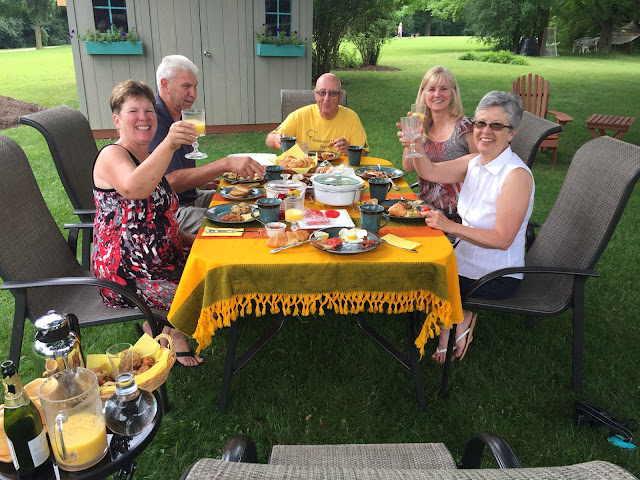 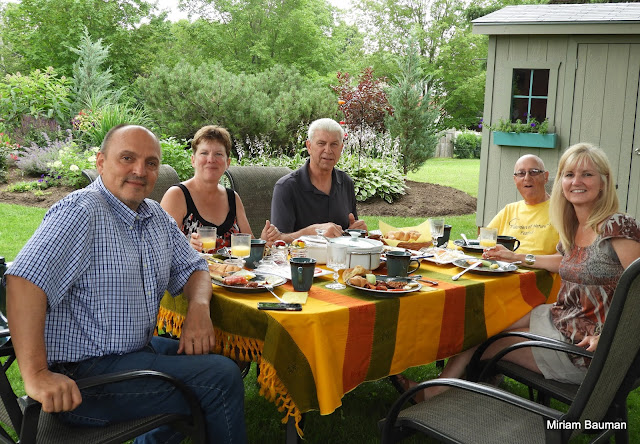 How fortunate we are to have such great friends!
Thank you Francine and Jim - it was fantastic!
Posted by David M. Gascoigne, at 10:00