There seems to be no end to the degree of backtracking, mind-changing, and the sewing of confusion by our abjectly inadequate provincial government, but one over-arching fact is clear, we are restrained from freedom of movement in one way or another. So I will continue to post about events that are occurring locally.

19 April 2021
Waterloo Corporate Campus, Waterloo, ON
This location is a busy retail/commercial venue, with a large grocery store, drug store, restaurants, other retail establishments and offices, a dental practice, and all the vehicular and pedestrian traffic that goes with it.
We found it nothing short of astonishing that a Canada Goose (Branta canadensis) has selected it as the best site for its nest! 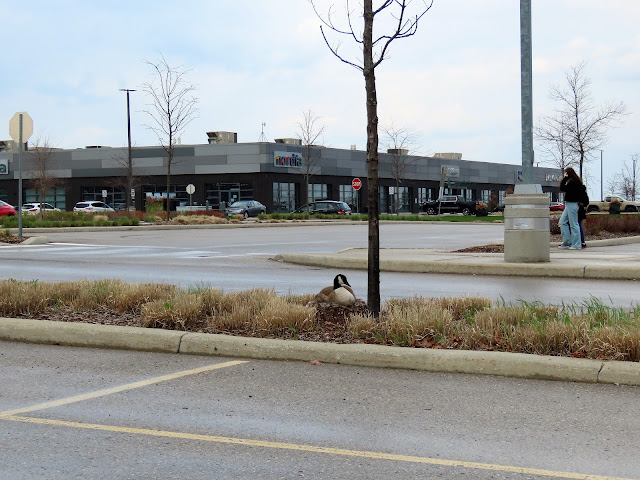 The area is quieter than usual due to COVID lockdown measures, but that will change in about four weeks, probably close to the time when the eggs will hatch, so I am not sure whether the nest is viable in the long term. 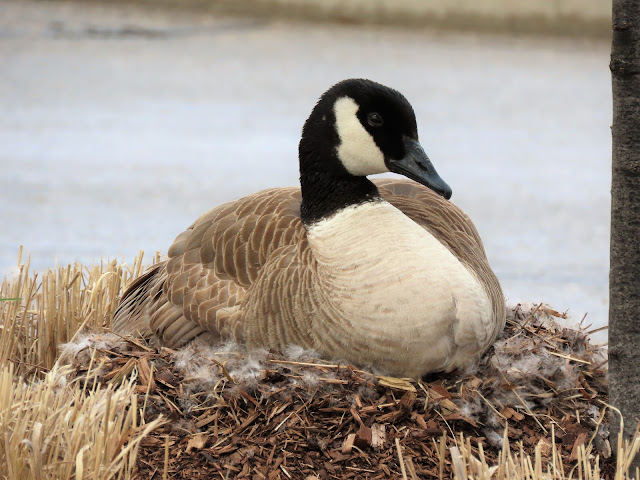 Potential nest robbers such as Ring-billed Gull (Larus delawarensis) and American Crow (Corvus brachyrynchos) are frequently seen here, leaving eggs left unprotected even briefly, exposed to risk. Foxes, coyotes, raccoons and skunks also scavenge in the area.
Someone has had a sign made to caution people about the presence of the goose at its nest, and we applaud this attempt to afford whatever protection is possible. 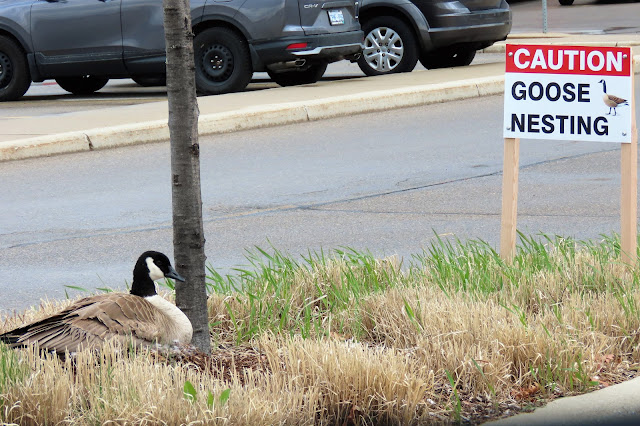 If the eggs do hatch, as we hope they will, there is no body of water anywhere close, and given that newly hatched goslings are led to the relative safety of a pond or lake soon after hatching, one wonders what will happen in this case.
It will be very interesting to keep an eye on the progress of the nest, all the while hoping for a successful outcome.
RIM Park, Waterloo, ON
We are permitted out for exercise purposes so a visit to RIM Park, a large area alongside the Grand River, seemed like a great choice. 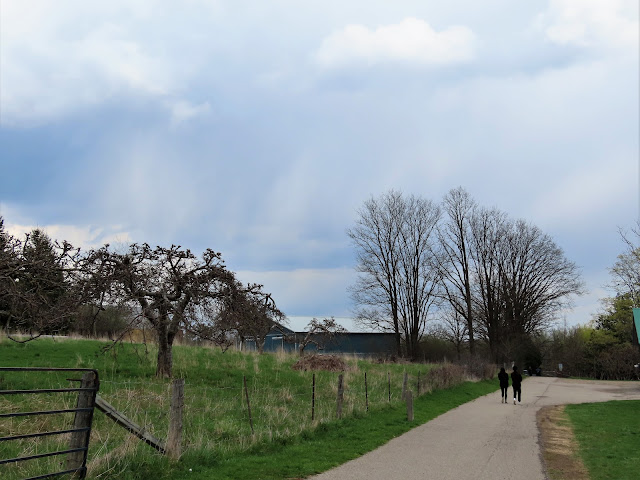 A few other people were visiting the park, but mostly we were not in close proximity to anyone else.
Several Turkey Vultures (Cathartes aura) were circling on the thermals, at times descending to barely treetop height. 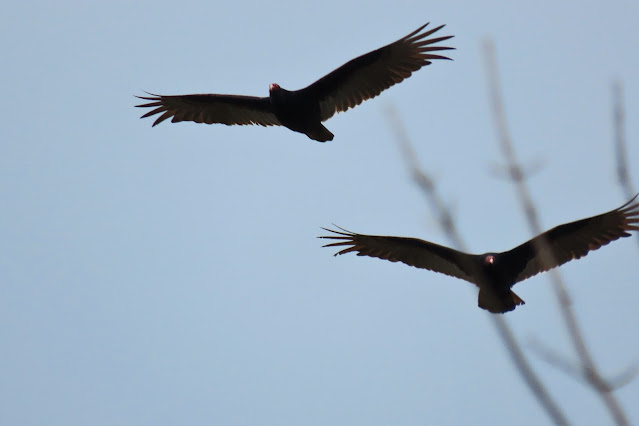 The object of our quest was Western Osprey (Pandion haliaetus), absent so far this year from familiar spots closer to home, and it was not long before we spotted our first bird carrying nesting material. 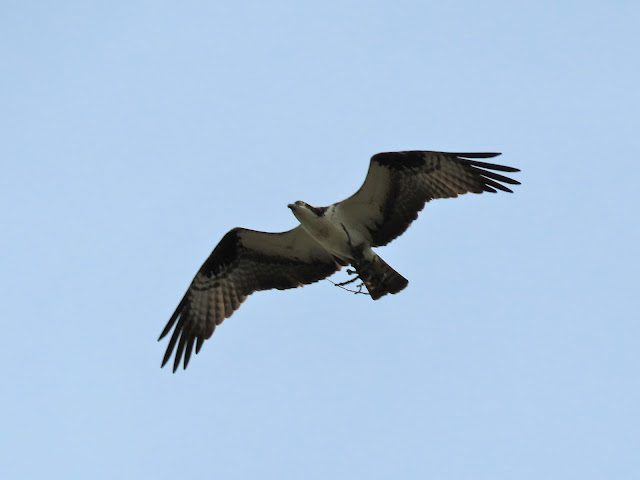 It is generally the smaller male that delivers the building materials to the female who arranges them according to her preference.
All around us, the world is greening up, a little more each day. 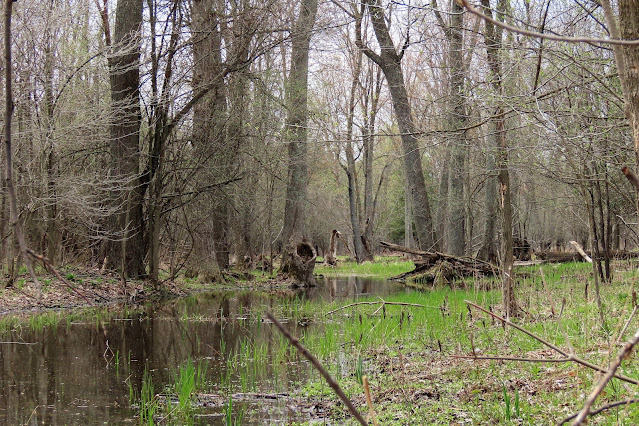 American Beavers (Castor canadensis) have emerged from their winter sojourn beneath the ice, and set to work immediately. 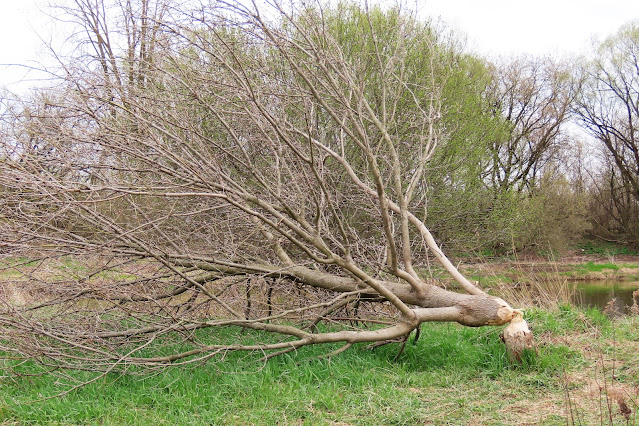 We spotted a Raccoon (Procyon lotor) emerging from a hole in a tree, where it had perhaps been enjoying an afternoon nap. 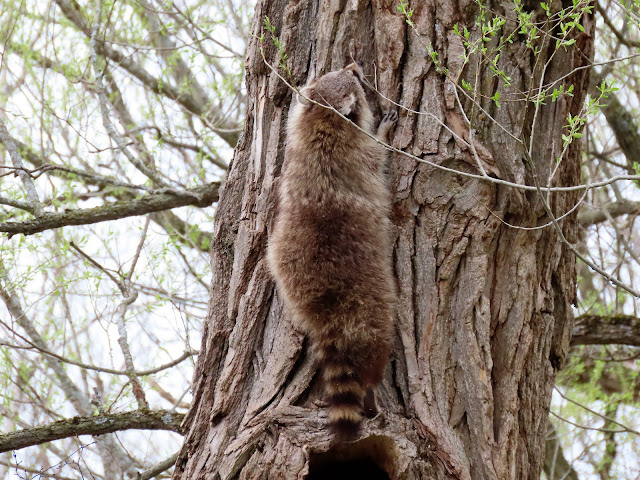 It climbed up the tree, showing considerable versatility and skill as it shimmied up vertically. 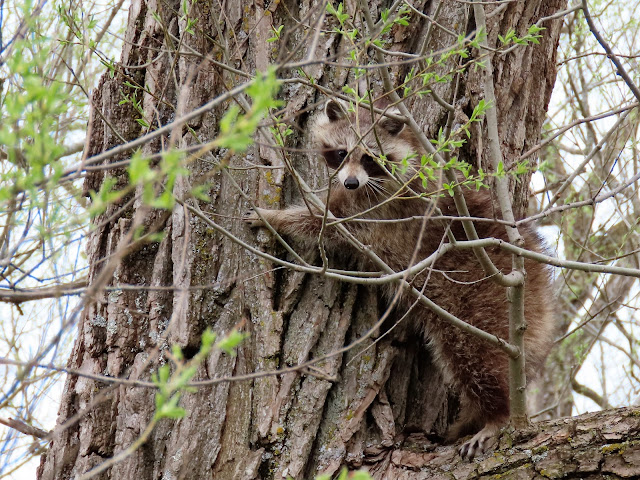 It kept a watchful eye on us, but seemed unconcerned, knowing no doubt that it had the upper hand, secure on the tree, and able to escape its human observers if it needed to. 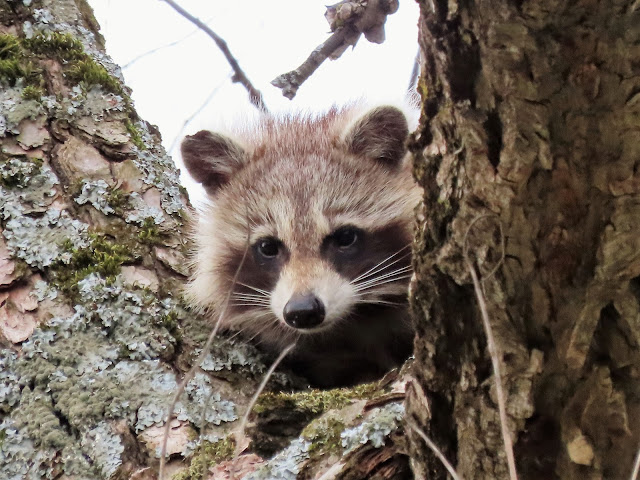 We were quite entranced and enjoyed about ten minutes of observation before the Raccoon came back down to the hole, inserted itself in, rear end first, and glanced back at us before disappearing from view. 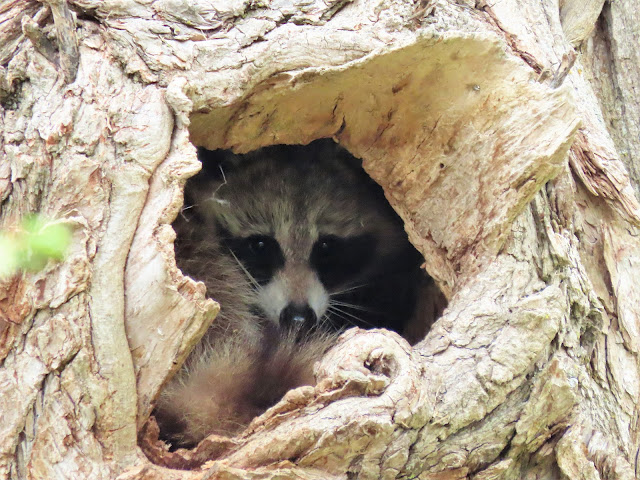 Miriam is always behind the camera, but today I grabbed it, and she posed for a picture. 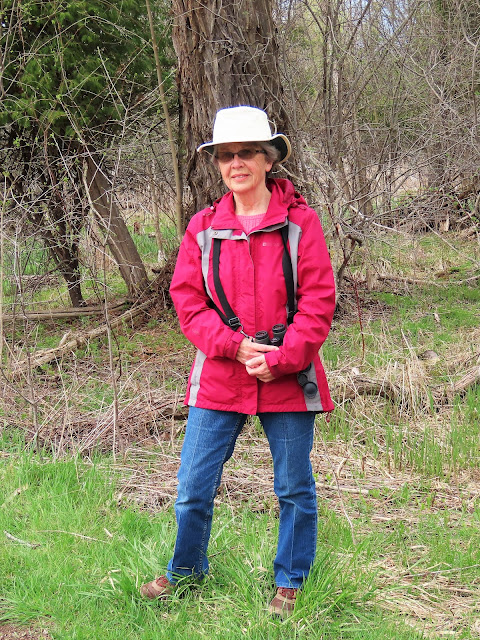 At the entrance/exit to the park there is a working farm and recently the fence has been replaced around the orchard. 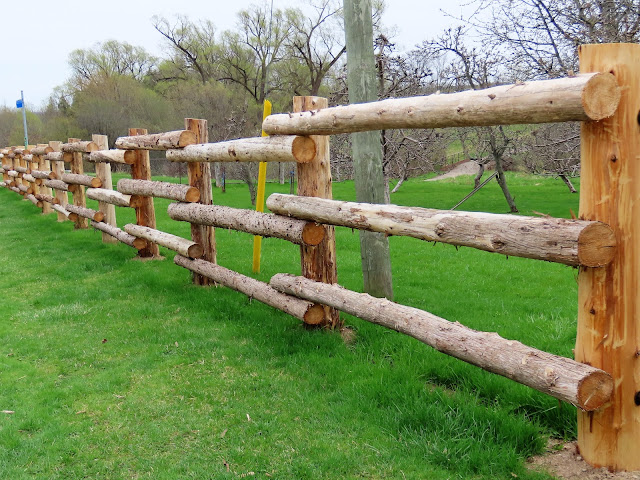 That is a serious fence! Seems to me it would keep out a herd of bison!
RIM Park is a large complex and in addition to the natural areas is home to skating rinks, other sports facilities and multi-purpose rooms of various kinds. The parking area for the buildings has for several years hosted a couple of pairs of breeding ospreys. 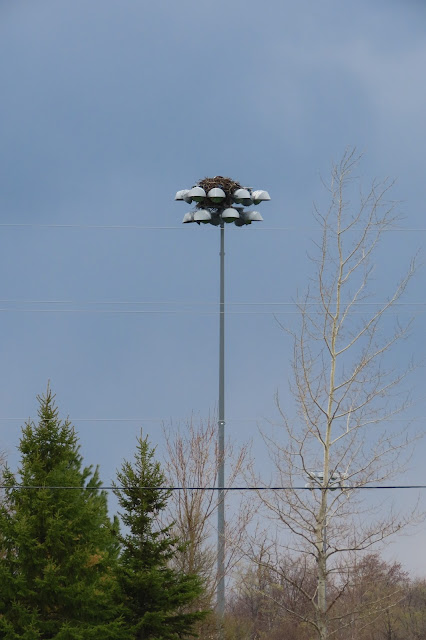 And when two birds get together at this time of the year, anything goes! 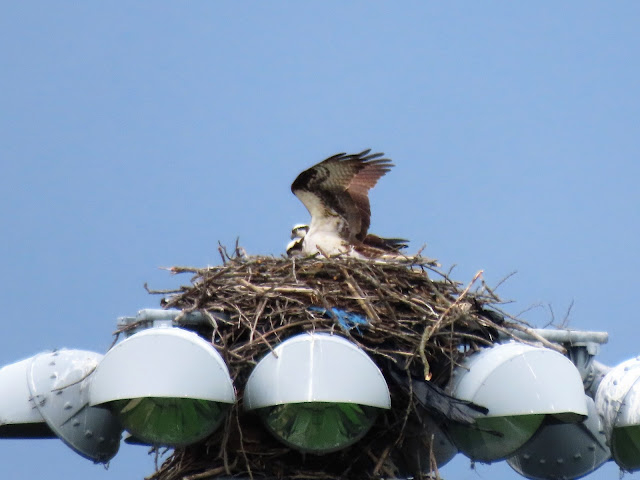 After all there has to be a reward for delivering those sticks! 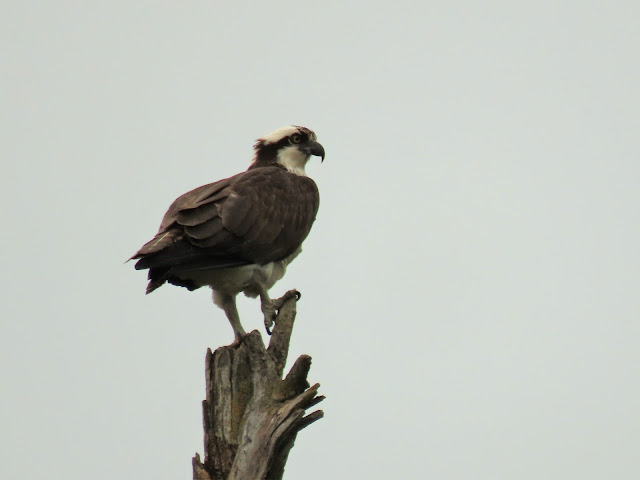 Better scan the area for more branches and earn a repeat performance.
We concluded that we saw at least three birds, possibly four, but we were unable to determine the makeup of the pairs. This male came in with a fish and perched a short distance from the nest. 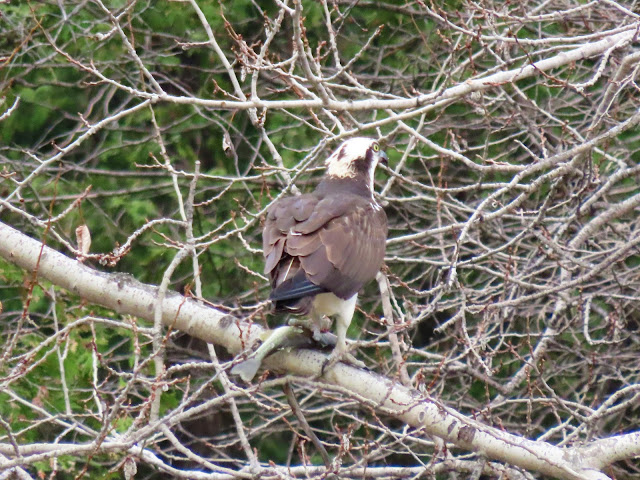 As often happens, it began to devour the head. 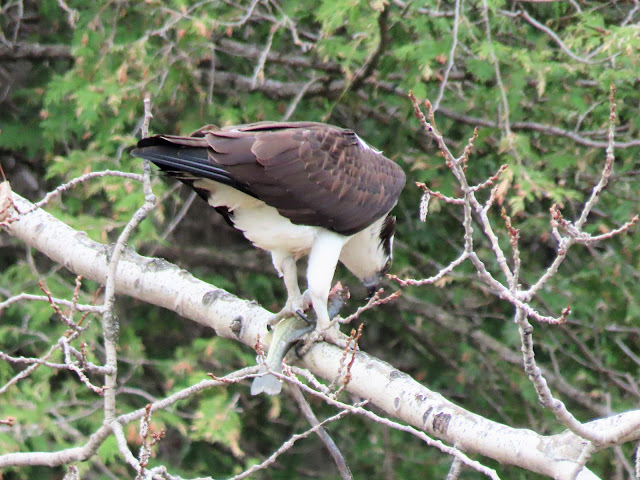 Miriam managed a shot showing the zygodactyl feet of this species, equipped with a reversible outer toe permitting the fish to be held with two toes forward and two toes back, and spicules on the soles to lock into slippery, thrashing prey. 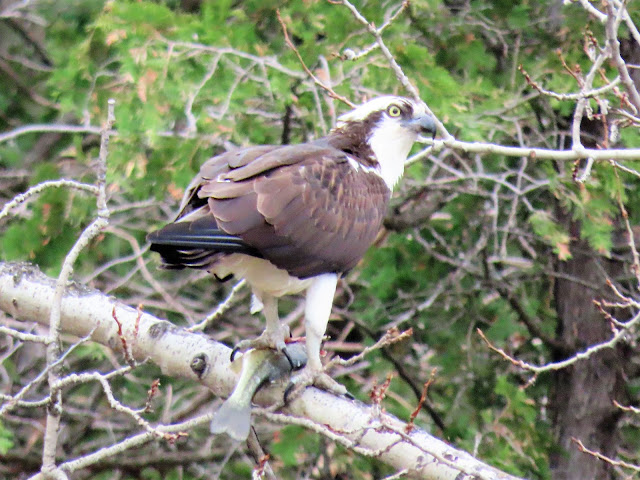 When the male was sated the fish was delivered to the female on the nest, the male descending into the wind. 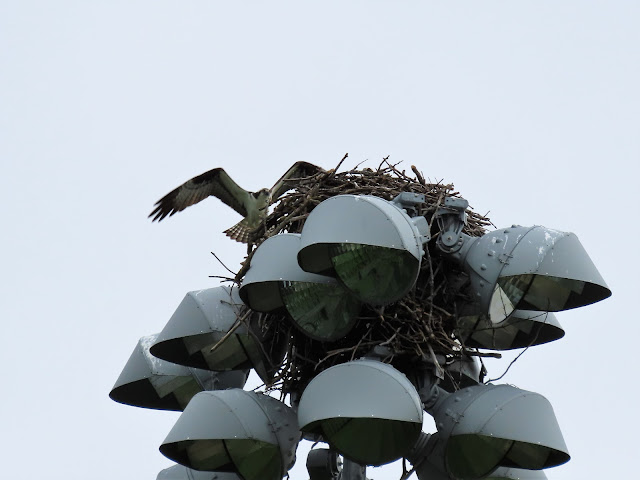 We had just witnessed one male leave the female at the nest following copulation, and one wonders about a second male delivering food, and what clandestine rewards awaited him. Fish with benefits perhaps is the maxim at this nest! We did not tarry to find out!
Conestogo, ON
In nearby Conestogo a pair of Bald Eagles (Haliaeetus leucocephalus) has successfully nested for several years, and it appears that they are raising young again this year. 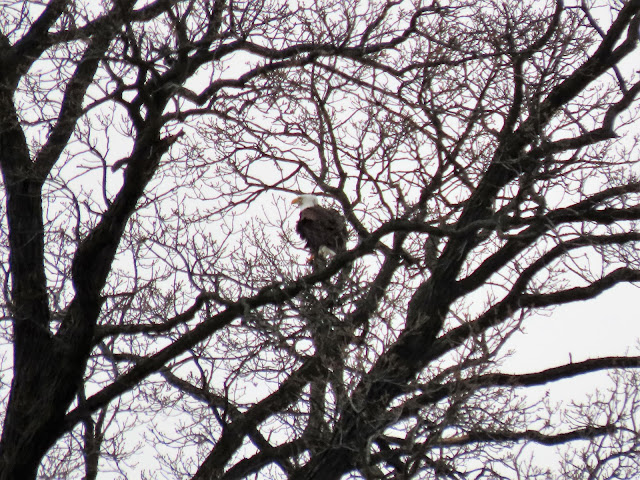 The nest is a considerable distance from the road, and the pictures reflect this. 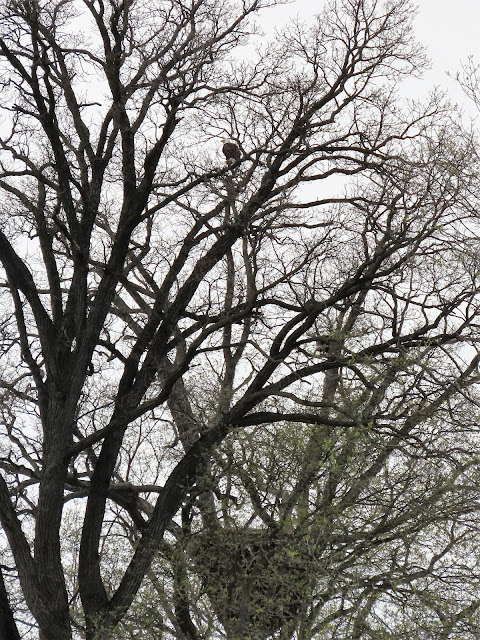 We assume that by now the young are in the nest and are being fed by both parents. 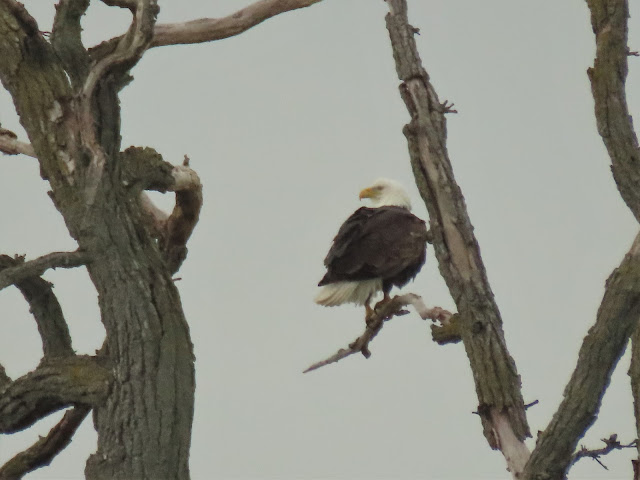 It is always a thrill to see this magnificent raptor.
Any Day in our Front Yard
The moment we leave the house, the joyful sound of a male House Finch (Haemorhous mexicanus) rings in our ears, from high atop the American Linden (Tilia americana) that dominates our front yard. 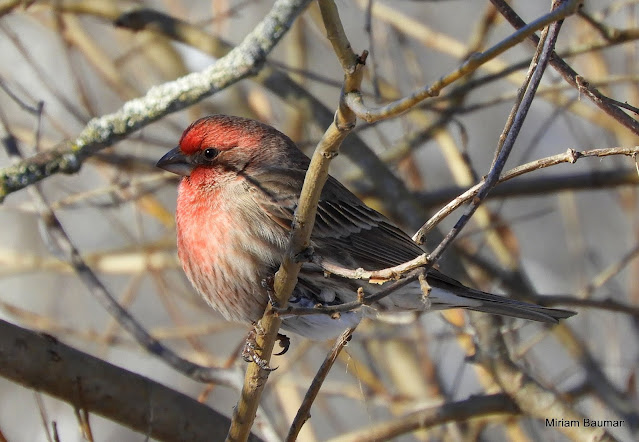 The song has been described as a "slow or disjointed jumble of musical notes". I am not persuaded that it is a "disjointed jumble" but it is without question musical, and very appealing to my ears, evoking intense pleasure on hearing it,
When I hear birds sing, I am reminded of the words of Charles Hartshorne, American philosopher and bird lover who wrote:
"..... birdsong is recognizably musical by all basic human standards. It has nice bits of melody, charming rhythms, even bits of harmony (for birds, unlike us, can sing contrasting notes simultaneously); it has obvious examples of theme with variations, near examples of accelerando and rallentando, crescendo and diminuendo, internal inversion, even change of key and tempo contrasts, as, for instance, when the same pattern, e.g., a trill is given at half or double speed."
Pay close attention next time you hear a bird sing and perhaps you will note some of this. A concert awaits you at the dawn of every day. And it won't cost you a cent. Encores are guaranteed!
Posted by David M. Gascoigne, at 09:46

Privacy: Travels with Birds is a personal blog written by David Gascoigne, with an occasional post by Miriam Bauman.
This blog accepts no form of paid advertising.
It reflects honest relationships and no personal information about any of its readers is shared with anyone. Google uses Cookies and by reading this blog you acknowledge this fact and consent to their use.
Upcoming Events
A very brief outline is given below. Please contact me for more details at davidmgascoigne@gmail.com
Obviously people not living in this area need read no further.
Friday 21 May 2021
Presentation to Women's Probus Club of Cambridge, Cambridge, ON Topic: Sex and the Single Bird.
Wednesday 21 July 2021
Presentation at Idea Exchange, Cambridge, ON
Topic: Urban Birds