Nestlings that had hatched nine days earlier were ready for banding and so it was that a group of interested people gathered at 09:30 to watch Kevin Grundy demonstrate his skills.
Chief among the observers were Sandy and two of her grandchildren.

Kevin in his normal careful fashion removed the young from the nest into the security of a cardboard box with a lid and took them to the table to be banded and recorded. 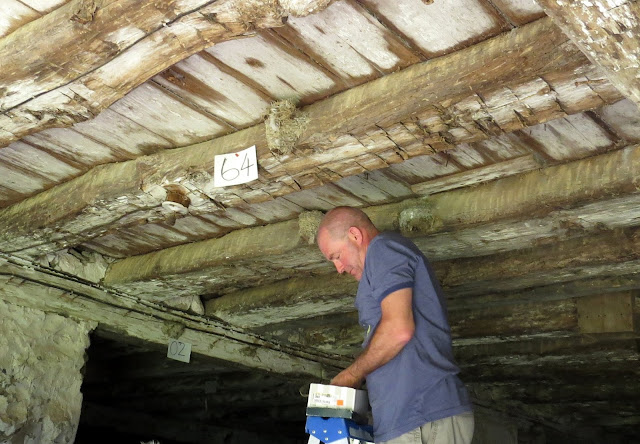 As can be seen the young birds are rapidly developing feather tracts and they were feisty and not at all happy about being removed from the snug confines of the only home they have ever known. 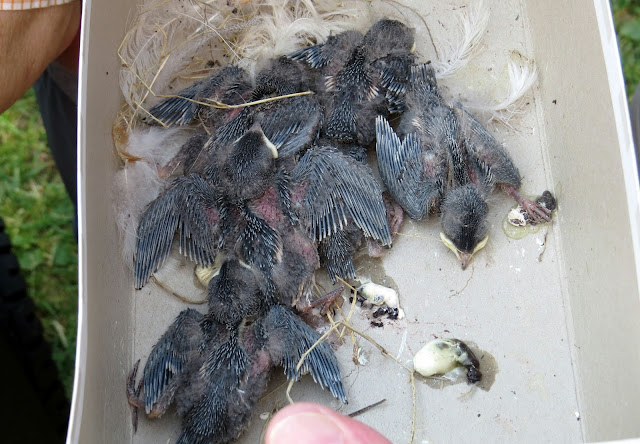 The children crowded in close so as not to miss a thing. 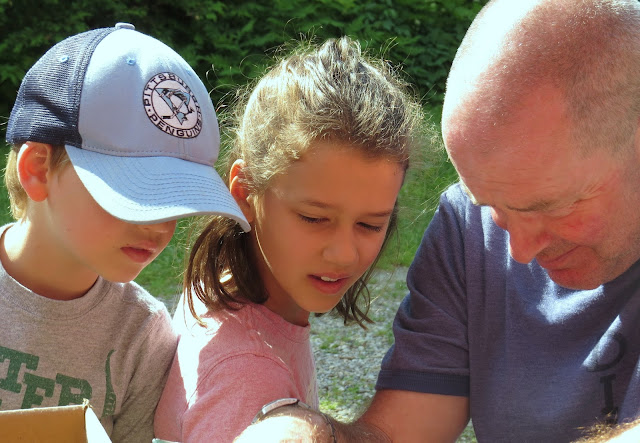 Kevin was wonderfully patient and explained everything he did to an attentive audience while simultaneously banding the young birds with alacrity and precision. 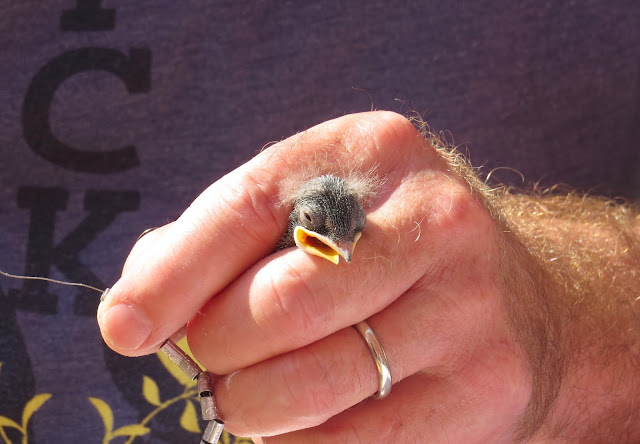 At times we thought that Annabelle was glued to Kevin's hip! She certainly watched the whole process very intently. 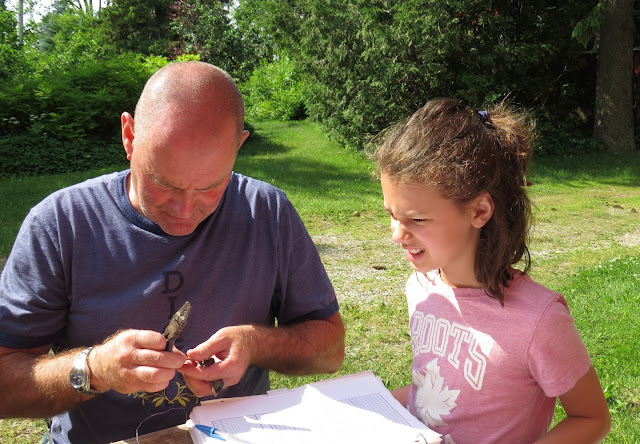 As you might imagine the children were anxious to hold a young bird and after cautionary instructions from Kevin he very carefully placed them in their cupped hands. 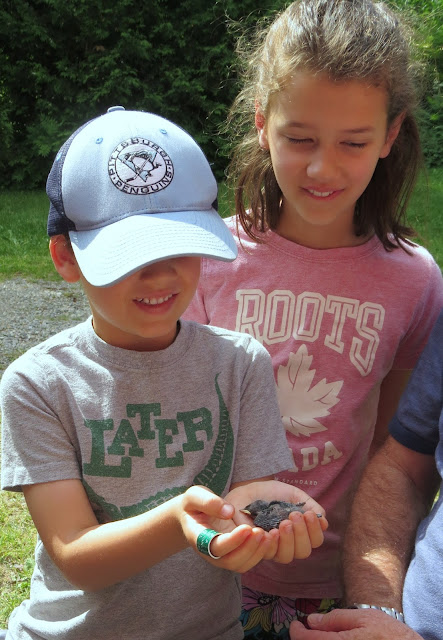 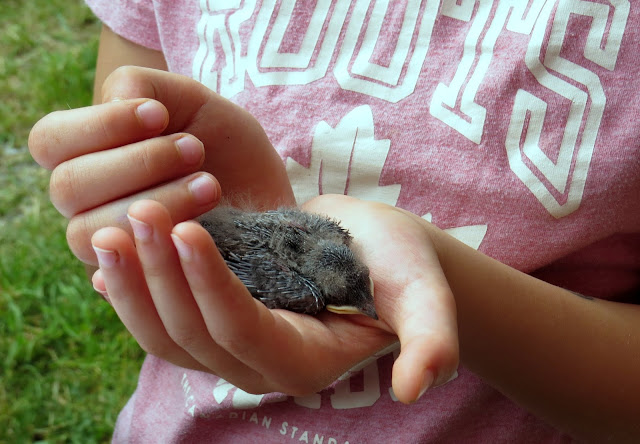 They were entranced with this intimate contact with young birds and no doubt would have much to talk about with their classmates at school the next day.
I am sure you noticed a green ring on Oliver's finger. No, we weren't banding the children too! The year 2016 marks the centennial of the Canada-US Migratory Birds Convention and special commemorative bands were issued. Kevin had brought one for each of the children. I thought it was a unique souvenir and I was very happy that Kevin had an additional one which now sits on my shelf.
Kevin holds the birds in the prescribed fashion and even though it doesn't look very comfortable the birds suffer no harm and are soon banded. 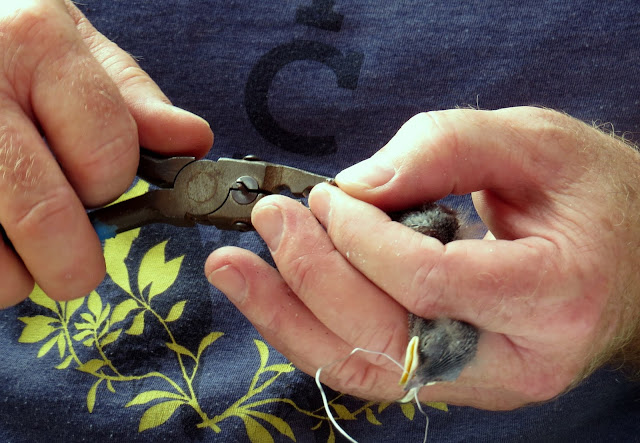 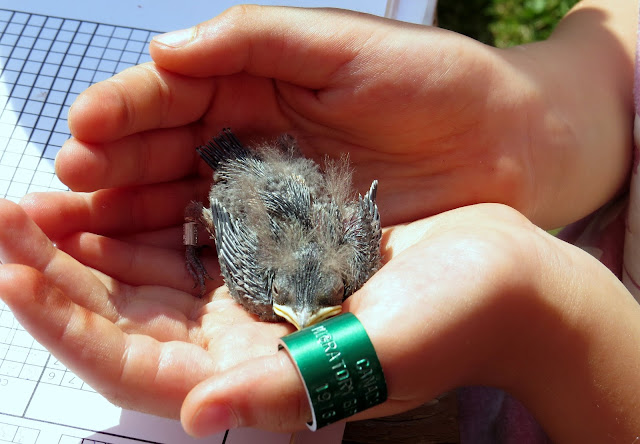 Once the banding of the entire clutch is complete the birds are placed back in their nest. 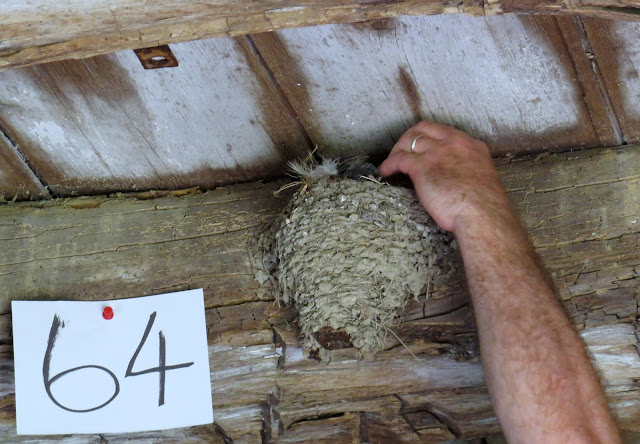 The adults at another nest continued to stuff insects into the hungry mouths of their offspring all the while the banding was going on. Given their long association with humans Barn Swallows are not especially disturbed by our presence, although they certainly let us know they would prefer that we were not there. In days past Barn Swallows were an integral part of any working barn or cow shed and the comings and goings of cattle, horses and humans were simply part of the daily routine. 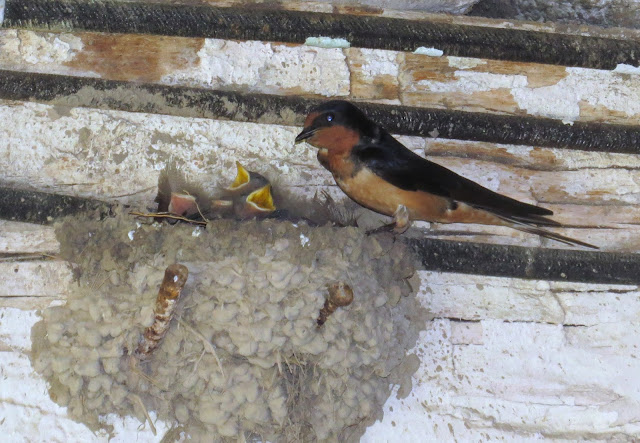 When we checked the nests as they progressed from eggs to young we used a mirror to count the young and monitor their progress wherever there was sufficient clearance to do so. 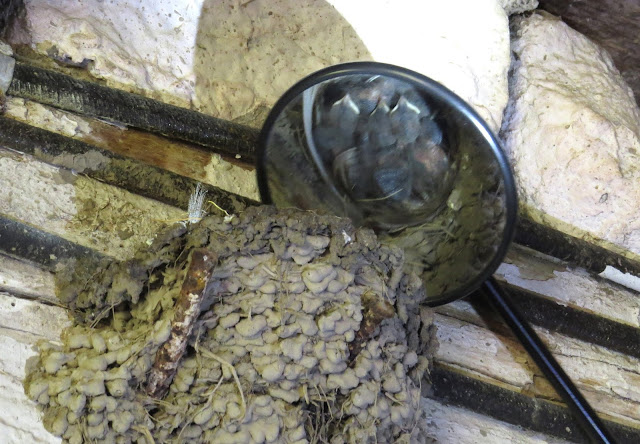 Since Annabelle is such a dedicated little naturalist Miriam decided that she should have a special bag in which to collect the treasures she finds on her nature walks. Of course, it has a nature theme, as befits a young scientist in waiting, and here is Annabelle proudly holding her bag. 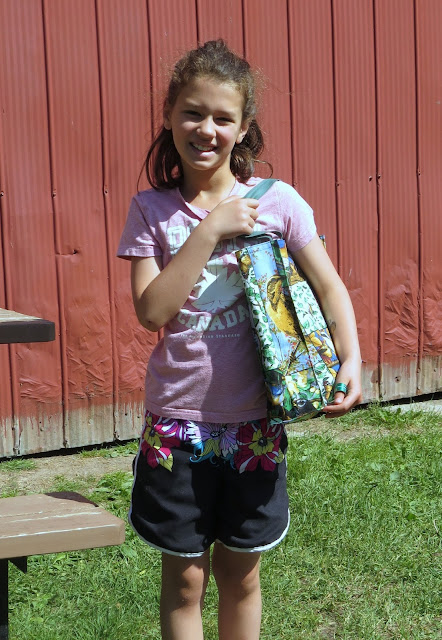 This whole Barn Swallow project has been a textbook operation so far and we have every expectation that it will continue to be so. If we can educate the children in the process it is certainly a bonus for everyone involved.
Many thanks to Miriam for taking these pictures while I was occupied doing other stuff.
Posted by David M. Gascoigne, at 12:01