Cooper's Hawk in Waterloo, ON 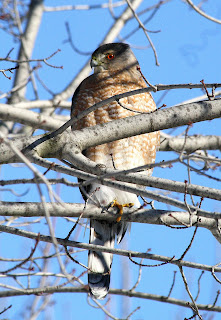 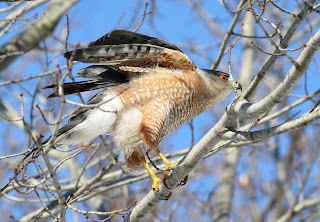 This bird has been spending the winter in our suburban neighbourhood, no doubt encouraged by the abundance of readily available prey at bird feeders. It has become quite approachable, apparently habituated to humans. These photographs were taken at close range.
Posted by David M. Gascoigne, at 18:41 No comments: 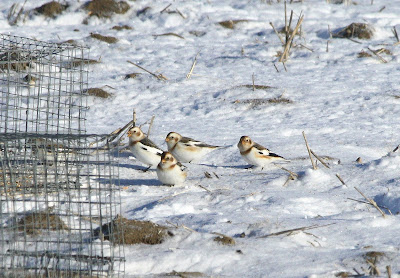 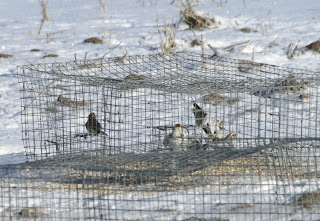 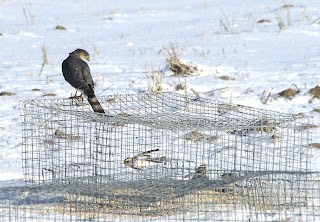 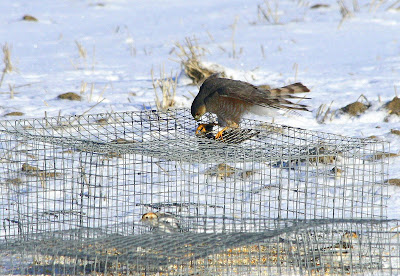 While travelling the rural roads near Metz, Ontario we encountered a large flock of Snow Buntings, with a single Lapland Longspur keeping company in the flock.
There was a licenced bird bander present for the principal purpose of banding Snow Buntings, a practice we have witnessed in previous years. In order to capture the birds he uses a cage on the ground, baited with corn, with one-way access into the enclosure.
As the pictures above show, it was verging on serendipitous to watch the longspur enter the cage with four Snow Buntings. Within minutes and certainly before the bander got out of his truck to empty the cages, a Sharp-shinned Hawk flew in and landed on top of the cage, no doubt attracted by the distress of the birds inside who were now flapping and doing everything possible to escape from their confines.
The hawk lost no time in inserting its talons into the pen and quickly caught the Lapland Longspur and made several attempts to get its beak into position to dispatch its prey, but without success given the relatively small mesh of the cage. By now the bird bander was on his way and when he got to within two or three metres the hawk dropped the longspur and flew off. The bird was examined by the bander and released immediately. Much to our surprise it could still fly and sped across the field with the Sharp-shinned Hawk in quick pursuit. As far as we could tell the longspur was not recaptured and the hawk dropped down into the field and then moved to the side of the road where it had nothing in its talons.
Whether the Lapland Longspur can possibly survive this ordeal is open to question, but it was a gripping, albeit somewhat distressing, drama to watch.
Our brother-in-law, John Lichty, was with us and the longspur was a lifer for him; a lifer I am sure he will not soon forget!

A Varied Thrush in Ontario 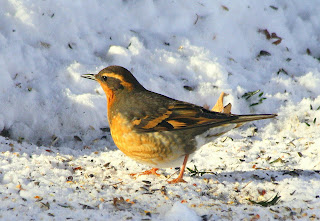 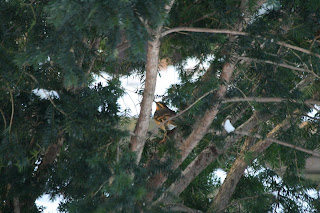 A Varied Thrush, Ixoreus naevius in Ontario
in the Winter 2010

From 14 December until somewhere near the end of the month a Varied Thrush was seen at 3218 Weimar Line, just outside Waterloo, ON. This very cooperative bird was at the feeders of Elmer and Bev Ewert and visiting birders were warmly welcomed to view this rarity, well outside its normal range of southern Alaska south along the coastal coniferous forests to northern California. It was a first Ontario sighting for many experienced birders and a delight for everyone.

Privacy: Travels with Birds is a personal blog written by David Gascoigne, with an occasional post by Miriam Bauman.
This blog accepts no form of paid advertising.
It reflects honest relationships and no personal information about any of its readers is shared with anyone. Google uses Cookies and by reading this blog you acknowledge this fact and consent to their use.
Upcoming Events
A very brief outline is given below. Please contact me for more details at davidmgascoigne@gmail.com
Obviously people not living in this area need read no further.
Thursday 22 July 2021
Presentation at Idea Exchange, Cambridge, ON
Topic: Urban Birds