As the seemingly interminable restrictions on free movement continue, we find ways to enjoy nature, and content ourselves with what we can do rather than bemoaning what we can't.
13 May 2021
Our backyard, Waterloo, ON
There is habitat, food, water and shelter in our yard and the variety of birds that visit us is adequate testament to this fact.
White-throated Sparrows (Zonotrichia albicollis) generally put in an appearance spring and fall and this year has been no exception. 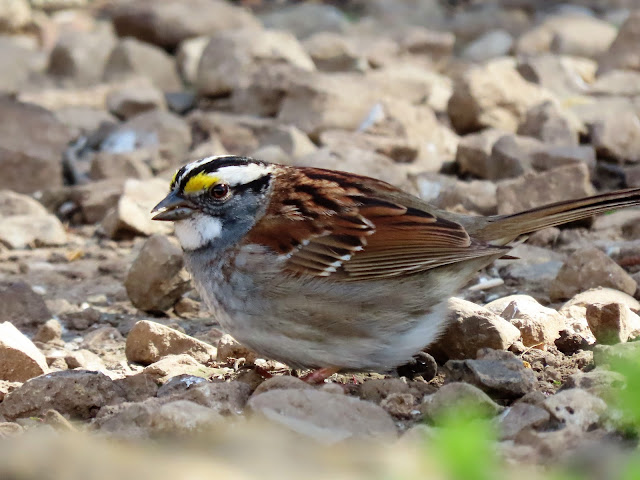 Its kissing cousin, White-crowned Sparrow (Zonotrichia leucophrys) can also be counted on to entertain us, and recently there have been as many as five individuals at a time feeding on the ground. 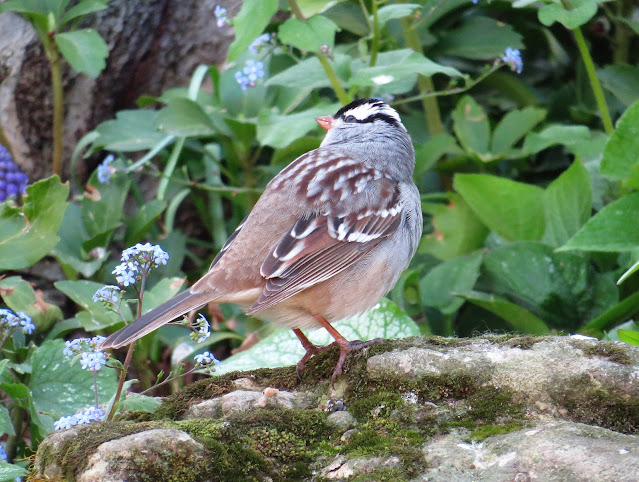 13 May 2021
Lakeside Park, Kitchener, ON
This location has become a bit of a favourite for us. It is close by and on a good day when there is an extensive parade of migrants it is a great place to see birds.
And the variety of plants should not be ignored either.
American Black Currant (Ribes americanum) is quite beautiful and is in the full flush of its inflorescence. 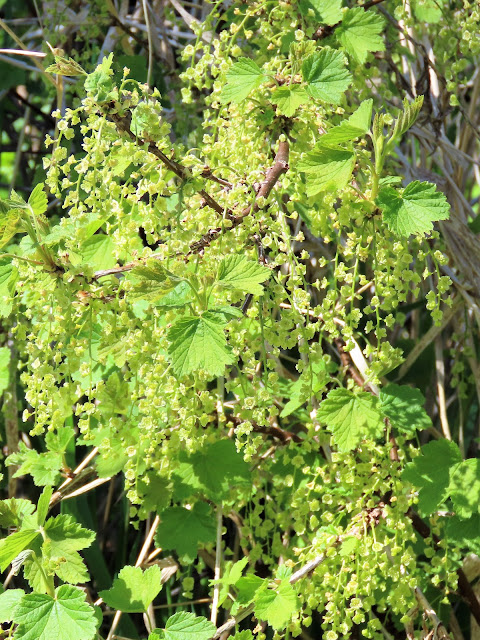 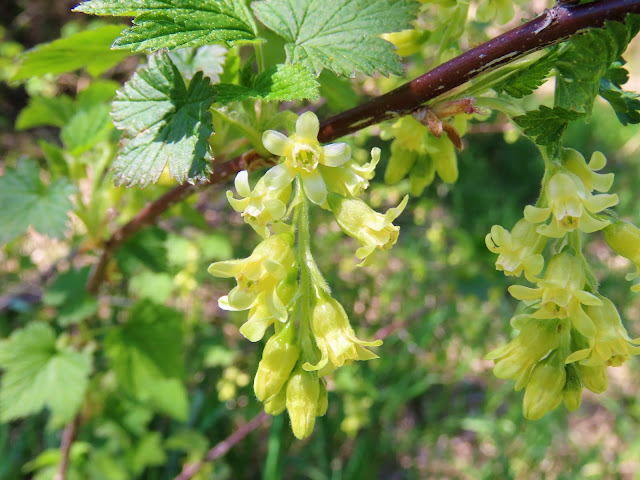 Bitter Wintercress (Barbarea vulgaris) is in the same family (Brassicaceae) as the watercress one buys at the greengrocer, but as far as I know is not widely consumed in the same way, its leaves having a bitter taste. 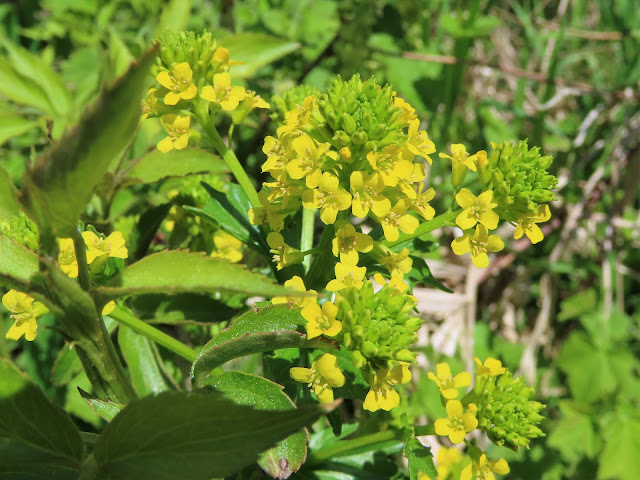 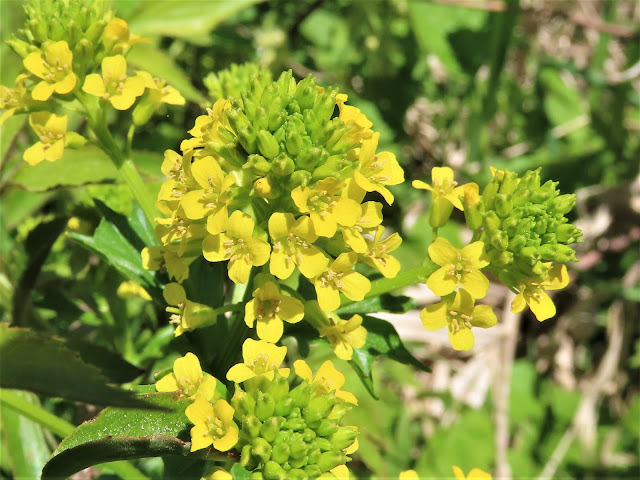 Garlic Mustard (Alliaria petiolata) is a plant that can cause the mildest of people to curse, swear, hiss and spit! It was introduced by early European settlers and is highly invasive. It often dominates the understory of native forests, seriously reducing biodiversity. 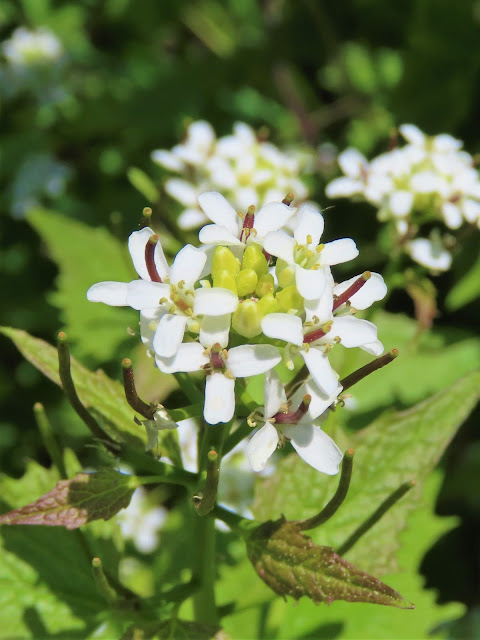 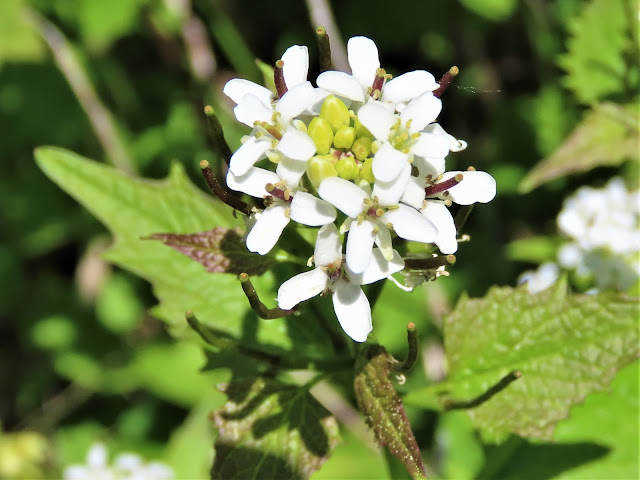 Attempts to eradicate it have all failed; the best one can hope for is to keep it at bay.
Birds are not the only animals with breeding on their agenda and we found this family of Grey Squirrels (Sciurus carolinensis) beyond delightful. 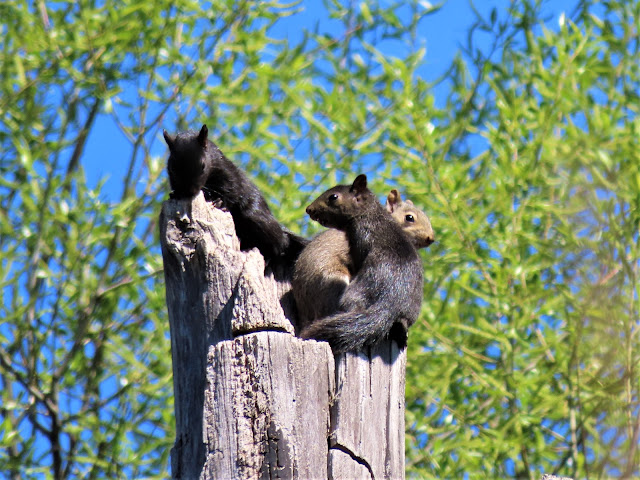 Soon these youngsters will acquire independence from their parents and will be causing mayhem and mischief in the forest as only squirrels can.
Eastern Kingbirds (Tyrannus tyrannus) find exposed perches from which to scan for passing insects..... 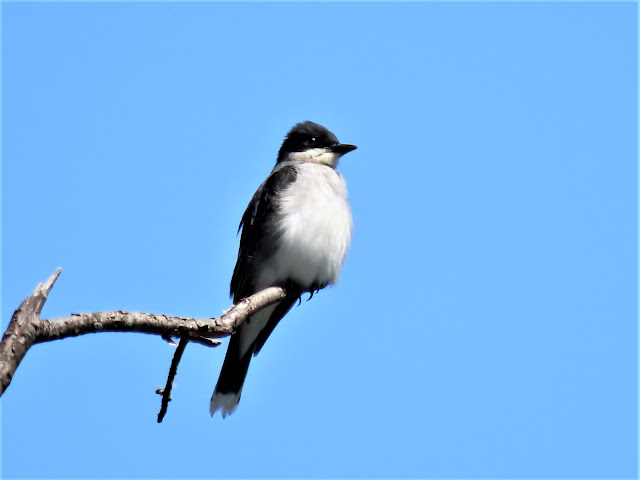 ..... and sally forth to snag each morsel that comes in range. 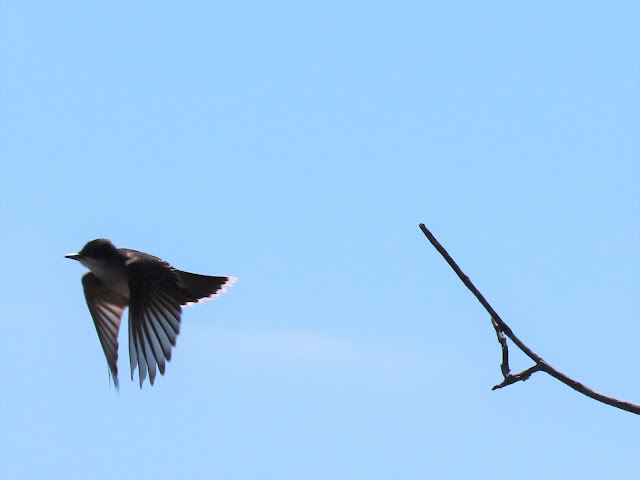 A small party of Cedar Waxwings (Bombycilla cedrorum) moved through and many cameras were aimed in their direction as this photogenic favourite posed obligingly. 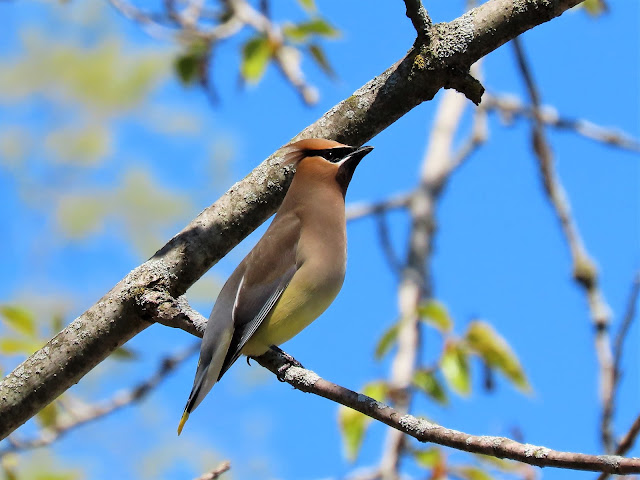 The black bib on a male House Sparrow (Passer domesticus) is prima facie evidence of fitness, so it would be a reasonable conclusion that this bachelor should have no difficulty attracting female companions. 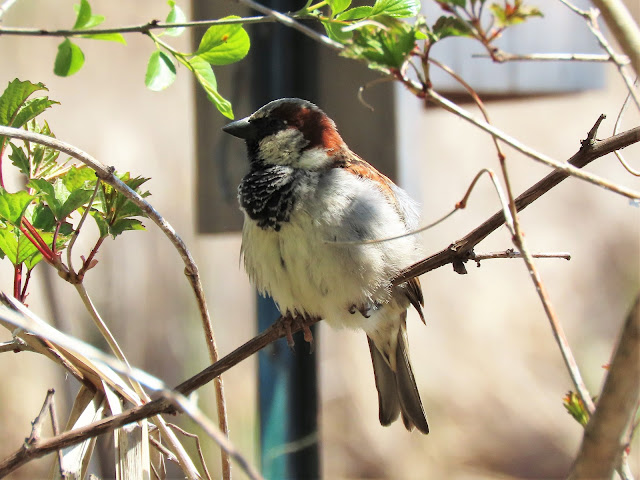 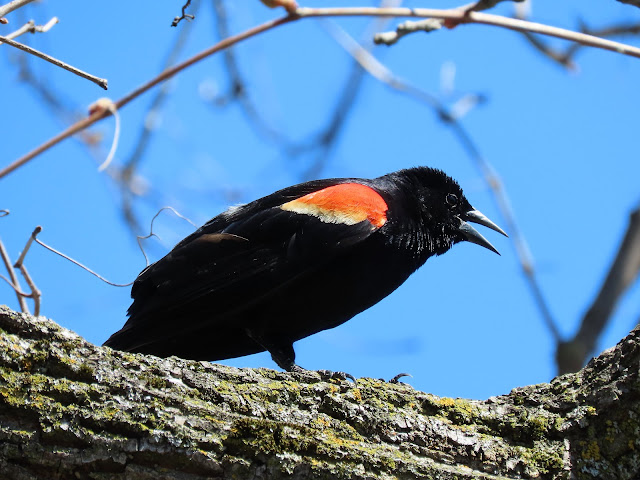 ..... is quite different from the female of the species. 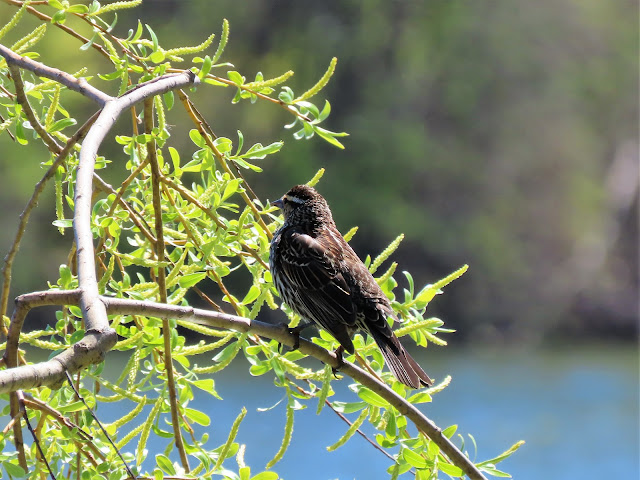 We always derive great pleasure from seeing a Grey Catbird (Dumetella carolinensis) and this was Miriam's fist sighting this spring. 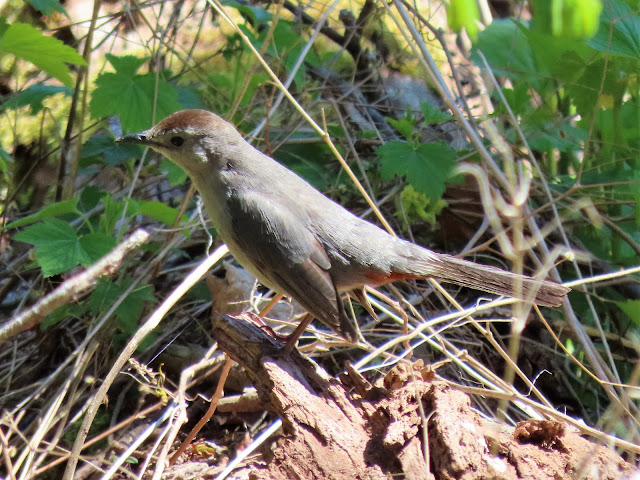 14 May 2021
Mill Race Trail, St. Jacobs, ON
A male Downy Woodpecker (Dryobates pubescens) seemed to be finding juicy grubs of one kind or another on this stump. 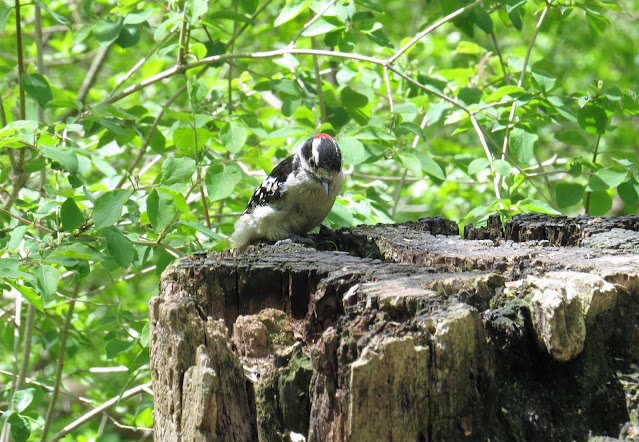 American Red Squirrel (Tamiasciurus hudsonicus) is a diminutive rodent that punches far above its weight, not hesitating to rout the considerably larger American Grey Squirrel if they are disputing over food resources. 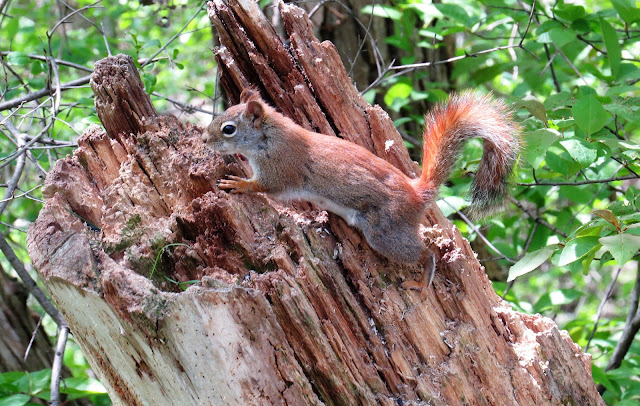 In fact, one could be forgiven for concluding that they just don't like each other, for rarely do their paths cross for even a minute or two before a chase breaks out.
It is difficult to tell from this picture, but the Midland Painted Turtle (Chrysemys picta marginata) in the picture below was quite tiny, barely attaining 10 cm I would estimate. 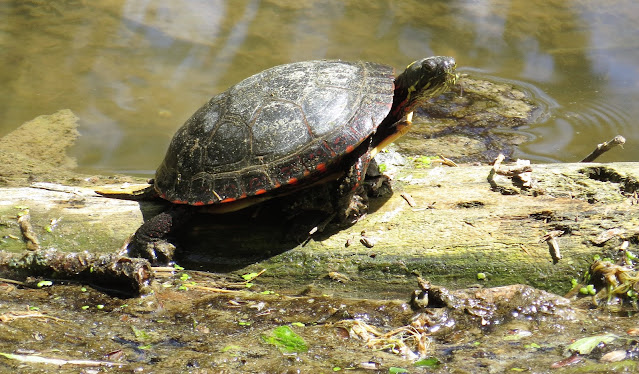 Does one ever tire of a male Northern Cardinal (Cardinalis cardinalis)? 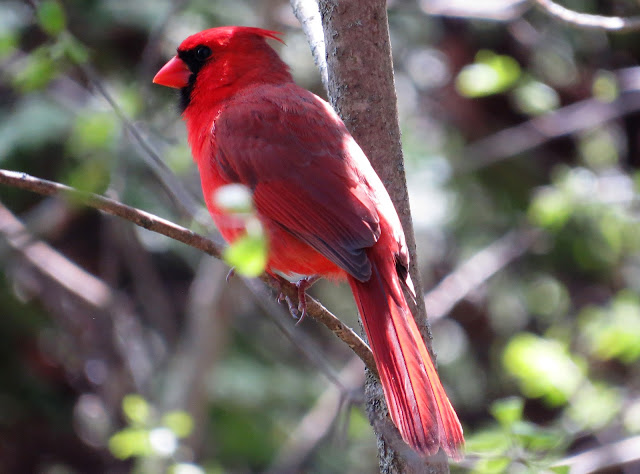 I think not!
Wet swamps and marshes are glowing with Marsh Marigolds (Caltha palustris). 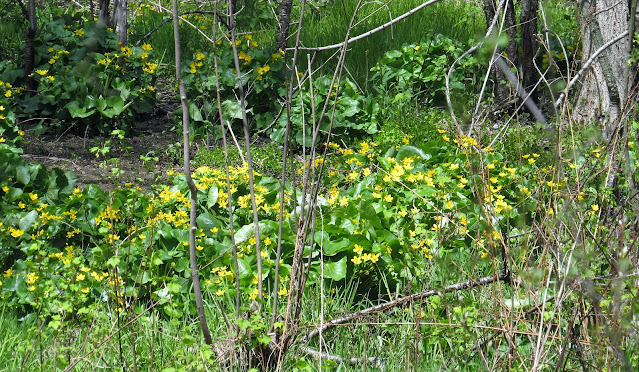 It evokes memories from childhood when I would pick them and put them in a jam jar of water on the window sill. And in those same wetlands I would catch newts (Family: Salamandridae) which I used to keep in an old ceramic baby bath, into which I had added mud and swamp water, with a few plants from the pond too. That was a long time ago!
White Trillium (Trillium grandiflorum) is Ontario's floral emblem and I confess to being a huge fan of this flower, which blooms for such a short period each spring. 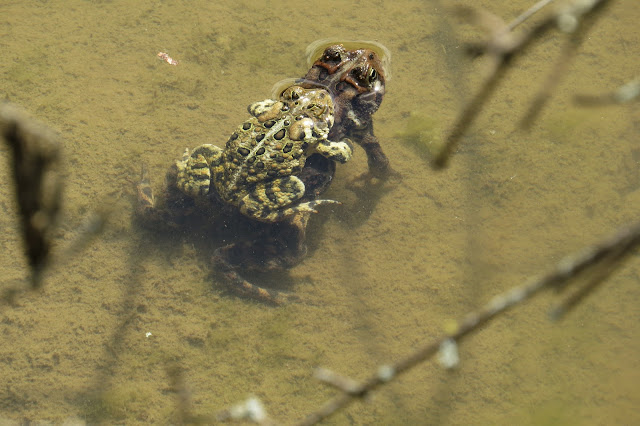 Males fought vigorously for the chance to mount a female and hang on at all costs. The rites of spring were the driving biological force;  nothing else mattered, the urge to mate and perpetuate the species trumped all else.
American Toads come in a variety of colours and every variation seemed to be on display. 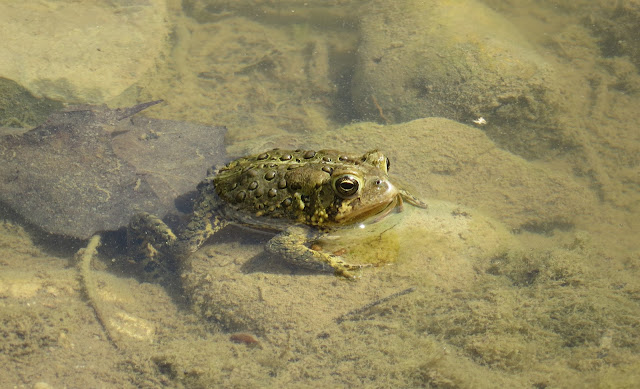 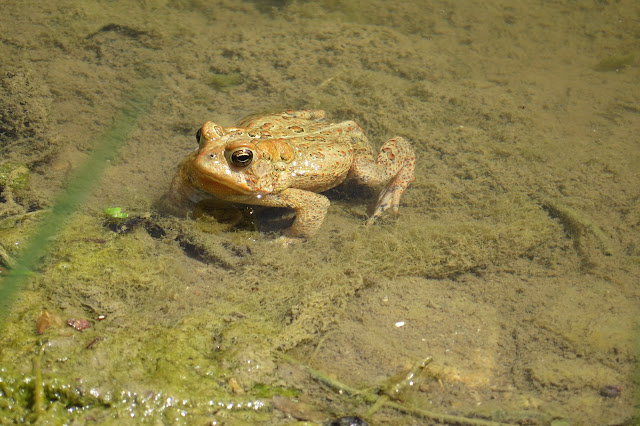 Soon it will be quiet again and the toads will have returned to dry land. The brief interlude of unrestrained lust will be over for another year.
15 May 2021
Two Storm-water Management Ponds, Waterloo, ON
I could hear the liquid notes of a Rose-breasted Grosbeak (Pheucticus ludovicianus) piercing the morning air, as this ardent male sang from a lofty perch. 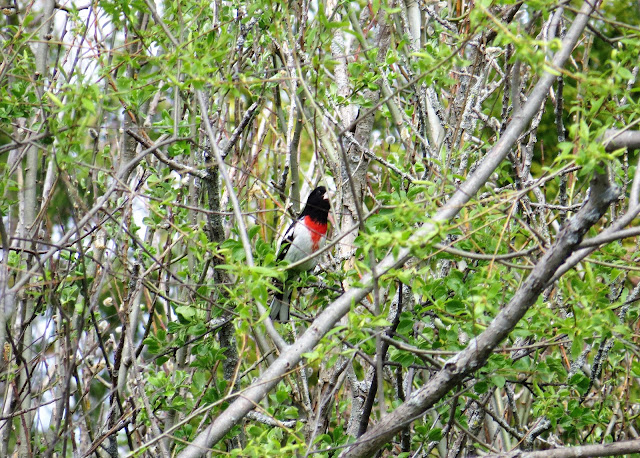 To claim that a Common Grackle (Quiscalus quiscula) possesses a song would be to stretch the limits of how one defines song. This male quietly probed the banks of the pond. 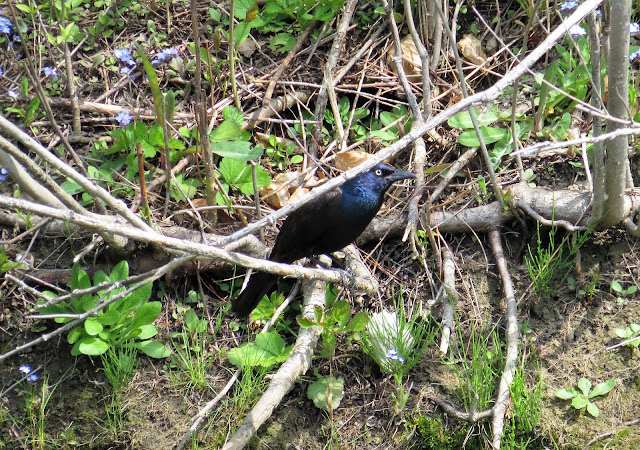 There will be more local news in the next post. A couple of observations yesterday were quite exciting and I will look forward to bringing those to you. Lockdown continues for humans, but for nature the world proceeds as it should. I hope to share it with you.
Posted by David M. Gascoigne, at 14:05

Privacy: Travels with Birds is a personal blog written by David Gascoigne, with an occasional post by Miriam Bauman.
This blog accepts no form of paid advertising.
It reflects honest relationships and no personal information about any of its readers is shared with anyone. Google uses Cookies and by reading this blog you acknowledge this fact and consent to their use.
Upcoming Events
A very brief outline is given below. Please contact me for more details at davidmgascoigne@gmail.com
Obviously people not living in this area need read no further.
Wednesday 21 July 2021
Presentation at Idea Exchange, Cambridge, ON
Topic: Urban Birds