As the lockdown continues, with its ever-confusing array of regulations, some of which seem totally contradictory, all of our walks and observations are very local. It perhaps reinforces the point that there is much of interest without going far afield. It seems also to make crystal clear that we have elected a cadre of idiots, destructive idiots at that, to run the province. I read an interesting op ed recently that discussed the fact that to practice medicine you have to be well trained, to be an engineer you have to be qualified and certified, to earn your living as an architect you must understand how to construct a building that will stand, but to be a politician you need no prior training at all. You only require the ability to convince the electorate that you are less of an odious choice than your opponent, and then devote all your attention to staying in office, whatever it takes. Our premier dropped out of a community college after only two months and has no higher qualifications of ANY kind, yet we reward him with our vote, feeling he is ready to run the affairs of a province larger in area than many countries, and with natural riches to be exploited, environments to be  destroyed, greenbelts to chop up, regulations to be diluted or abolished. Ah, what a wise electorate we are! And this is who we expect to successfully manage a pandemic. Hah!
09 April - Our backyard, Waterloo, ON
Towards the end of winter we were visited by a few Pine Siskins (Spinus pinus), but recently as many as twenty have been feeding in the backyard. 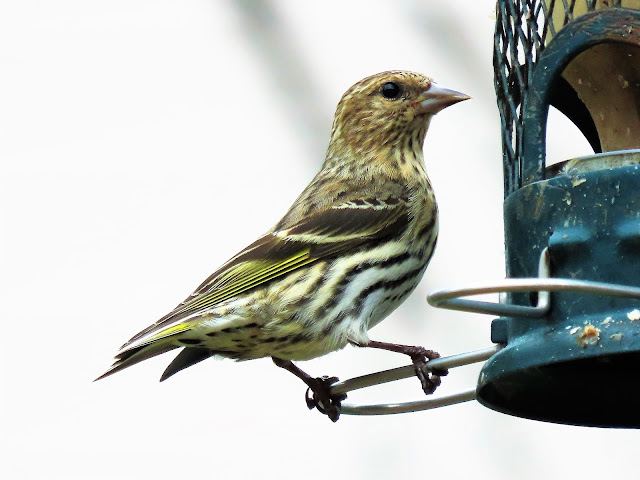 I assume that these are birds from farther south stopping off on their way north to breed in the boreal forest.
09 April 2012 - The Mill Race Trail, St. Jacobs, ON
This trail, mere minutes away from our home, has long been a favourite.
We have walked it so often that perhaps this Eastern Chipmunk (Tamias striatus) recognizes us! 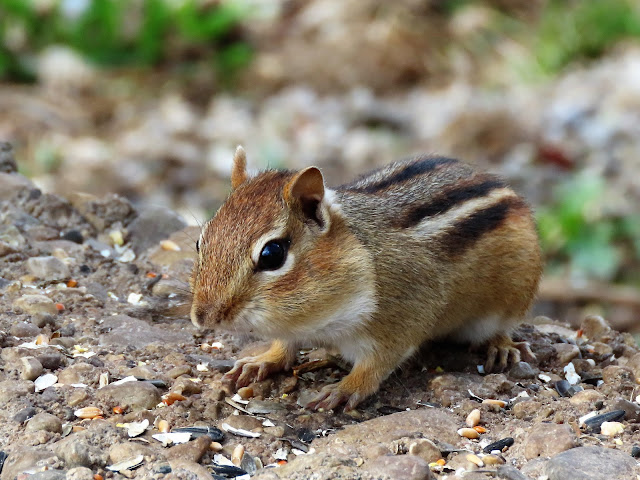 This beautiful yellow flower is found in the genus Sternbergia and I believe that it is Sternbergia vernalis. It is quite similar to croci. 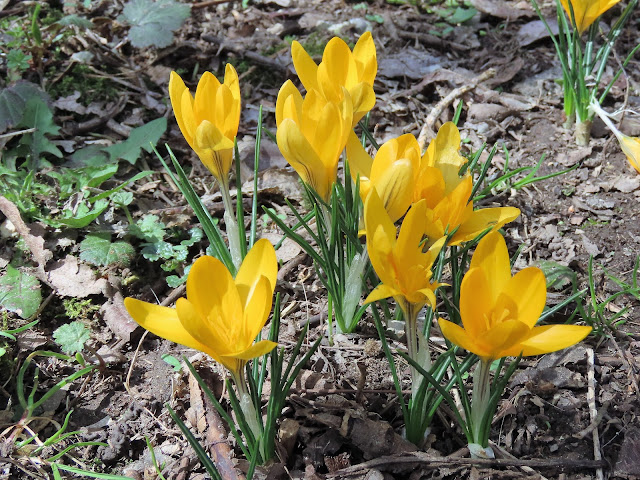 I don't recall having seen this plant on the Mill Race Trail before, so I suspect that it has origins in a domestic variety. The range of invasive, introduced and native species seems to blur more each year, and it is clear that we will never be able to return to the pristine landscape viewed by the first European settlers in the area.
Turtles turn their thoughts to procreation at this time of year, and we saw three Snapping Turtles (Chelydra serpentina), probably females, ready to exit the water and find a suitable substrate in which to lay their eggs. 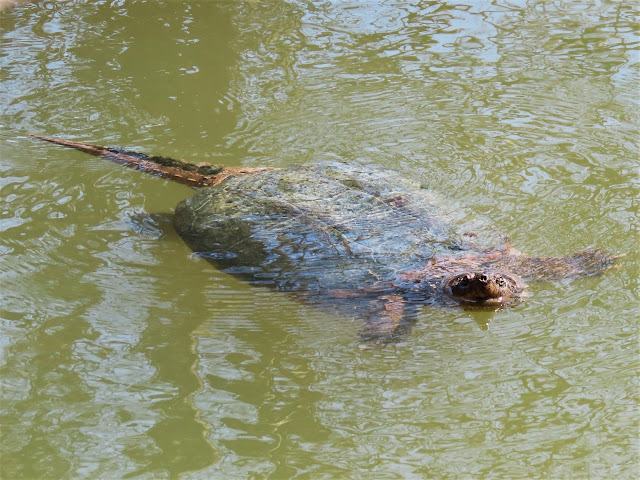 Snapping Turtles are quite ill-tempered and if you wish to help one across a busy road, be very careful how you handle it. 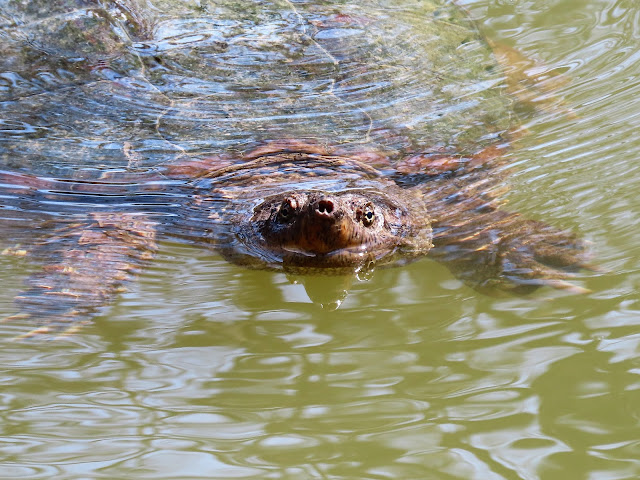 In the water, however, where they are at home, they pose little threat to bathers, preferring to feed on the decomposing flesh of organisms that have died and sunk to the bottom.

People who buy summer cottages on a northern lake, without knowing anything about the ecosystem, sometimes mount frenzied hunts to rid the water of Snapping Turtles, in the process overturning the ecological balance and degrading the quality of the lake which they have selected for their weekend pleasure. It is a foolish pursuit founded in ignorance.
If one bird can be counted on to cheerily accompany us on our walk it is Black-capped Chickadee (Poecile atricapillus). 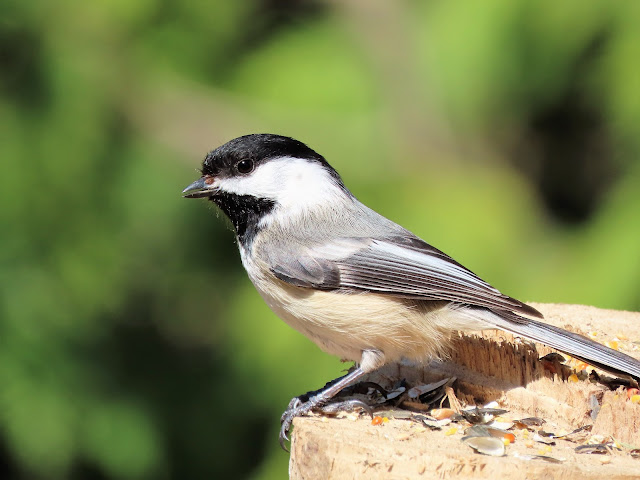 When I took out my pencil to make a few notes a chickadee immediately landed on it, and so started a game of "Perch on the Pencil" enjoyed by several individuals. And by the human holding the pencil I might add! 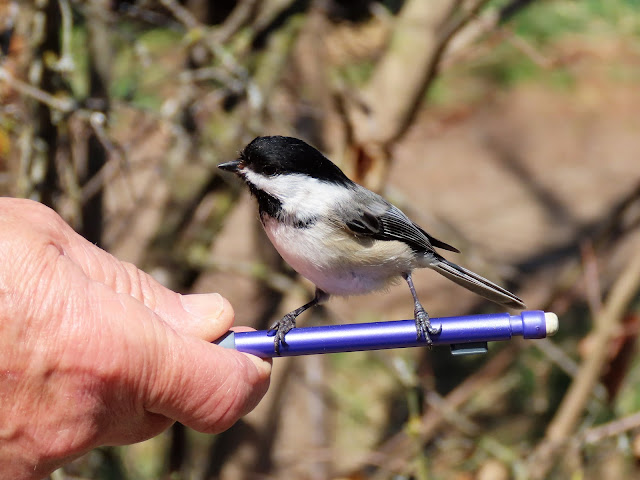 Being ever cognizant of my passion for birds' feet, Miriam took a nice picture of this bird's anisodactyl configuration. 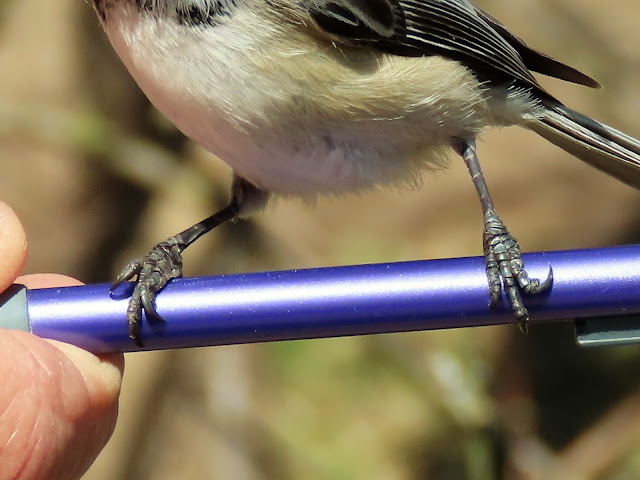 So many tree species have been attacked by a fungus or insect invader, that I sometimes wonder  what our forests will look like fifty years from now as more and more species succumb.
Ash (Fraxinus spp) have been decimated by the Emerald Ash Borer (Agrilus planipennis) and one of the attempts to control it is preemptive removal of its host trees. 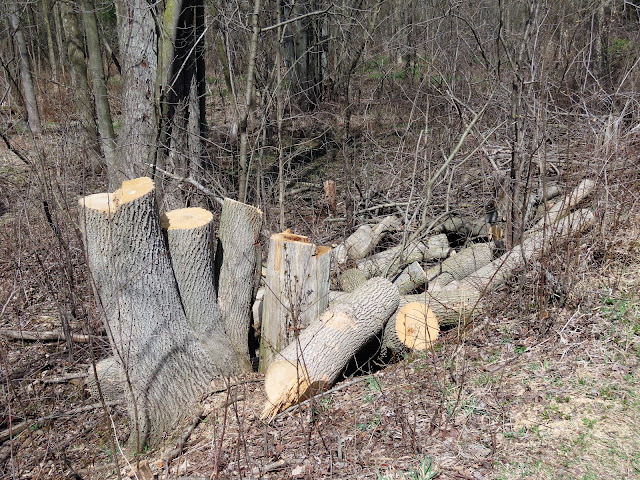 It is heartbreaking to witness so many apparently healthy trees being sacrificed, but it is a necessary action in the ongoing struggle to protect our forests.
We spotted a female Red-bellied Woodpecker (Melanerpes carolinus) busily working up and down a trunk. 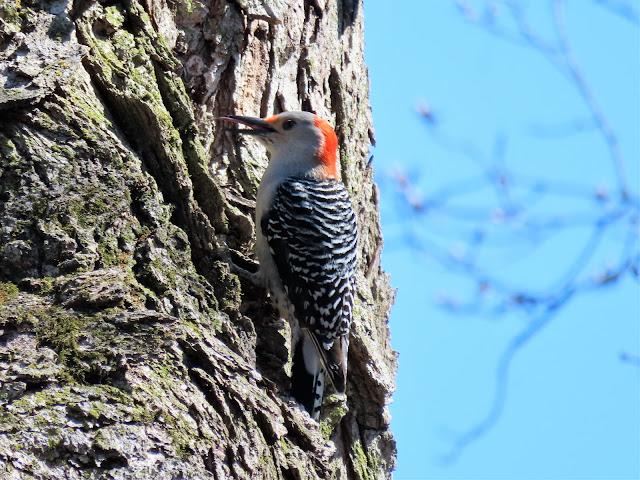 It appeared to locate and capture a choice item of food. 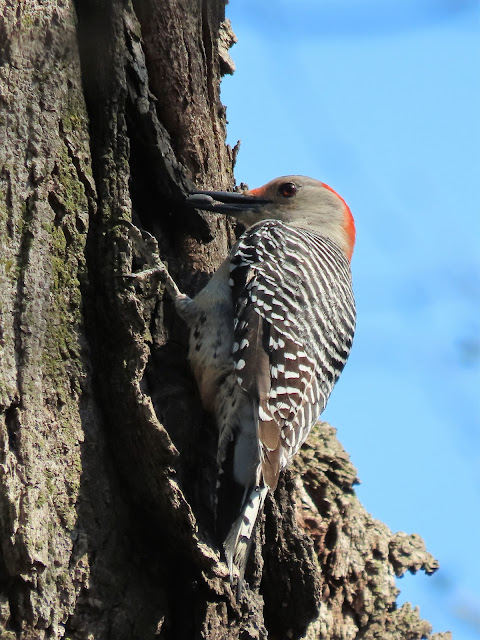 Rather than gobble it down immediately, the woodpecker proceeded upwards, perhaps wishing to dine with a view! 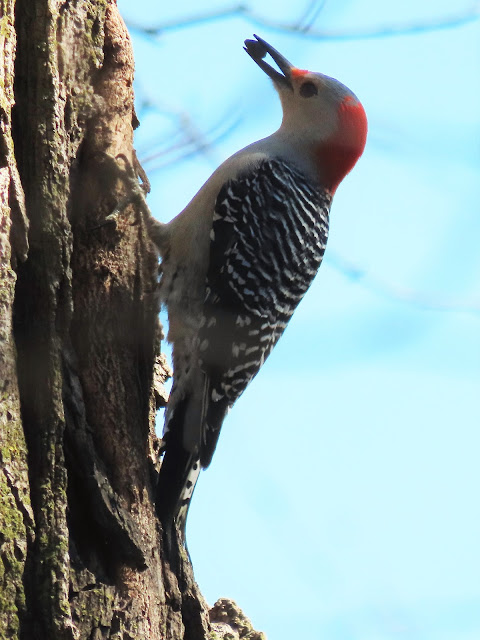 We stopped in the village of St. Jacobs to enjoy a coffee, where it is only available to take away of course, and the process to get it seemed more difficult than one might have possibly imagined before COVID influenced every action we take.
Many creative ways have been devised to urge people to maintain their distance from each other, and in a Mennonite area, where horses and buggies are commonplace, I thought this was charming and effective. 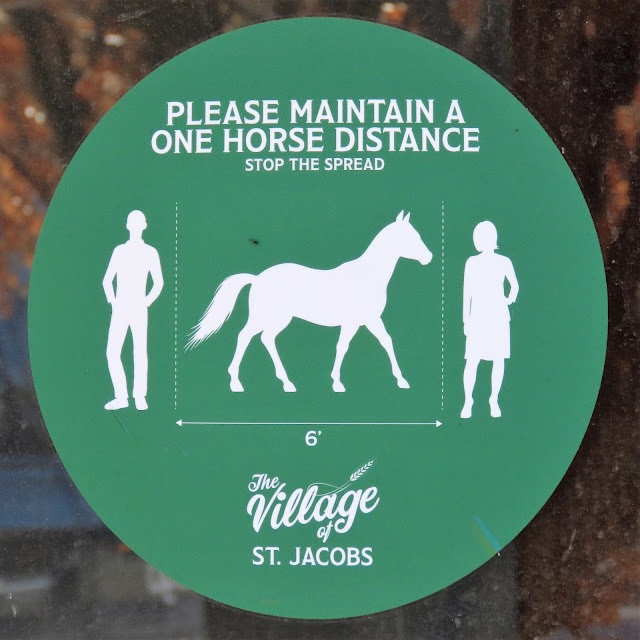 09 April 2021 - Benjamin Park Trail, Waterloo, ON
Having walked the Mill Race Trail in the morning, we opted for the Benjamin Park Trail behind our house for our afternoon walk.
An American Robin (Turdus migratorius) was drying off after a vigorous dip in the creek. 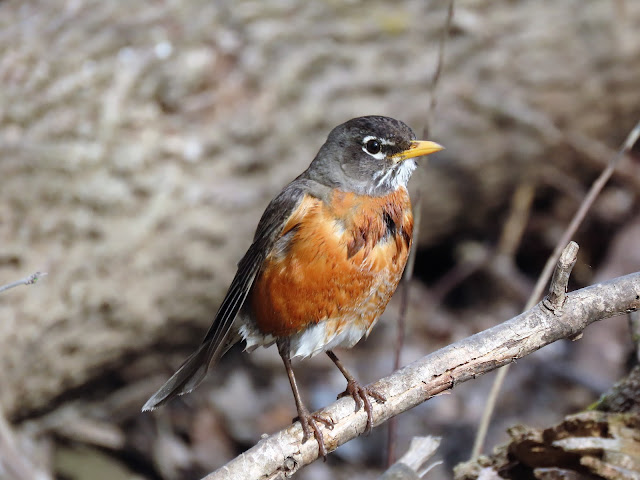 And a handsome male Red-winged Blackbird (Agelaius phoeniceus) was letting all the females in the vicinity know that he was their best choice. 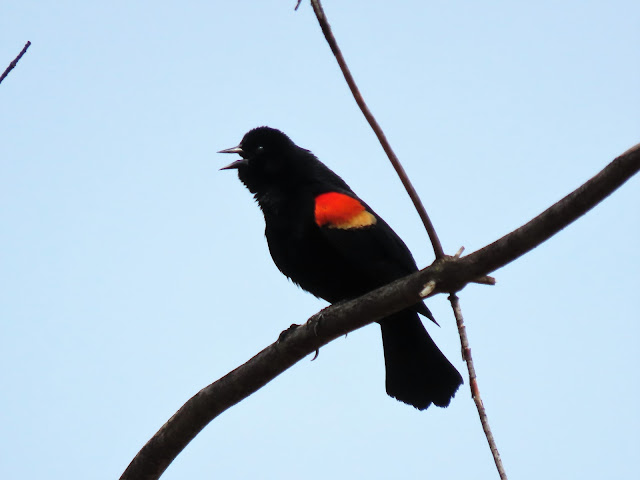 And you will not be surprised that we could not resist a quick look at "our" Eastern Screech Owl (Megascops asio). 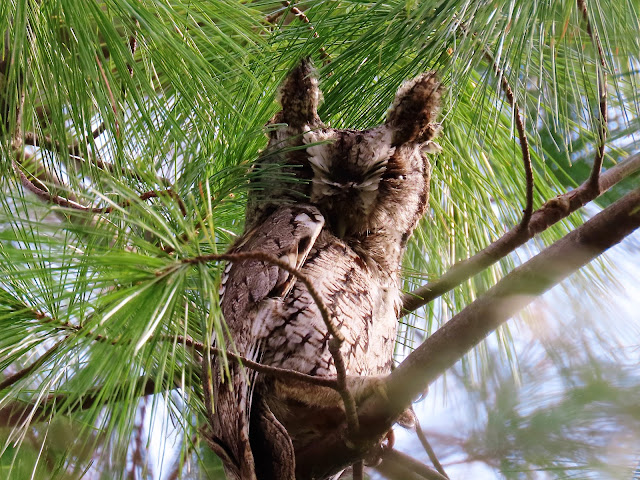 10 April 2021, SpruceHaven, St. Agatha, ON
Sprucehaven is abuzz with activity, and breeding, and preparations for breeding are taking place everywhere.
Tree Swallows (Tachycineta bicolor) have returned from the south and are checking out nest boxes. 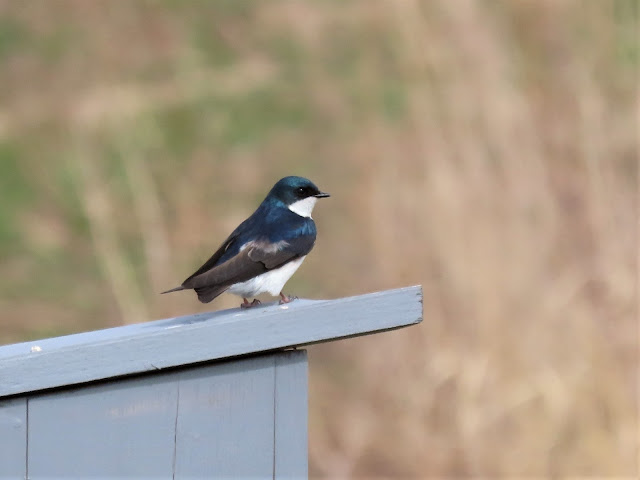 When a pair are seen together at a nest box there is a very good chance they intend to occupy it.

Eastern Bluebirds (Sialia sialis) have also concluded domestic arrangement and one nest box has a full clutch of five eggs. 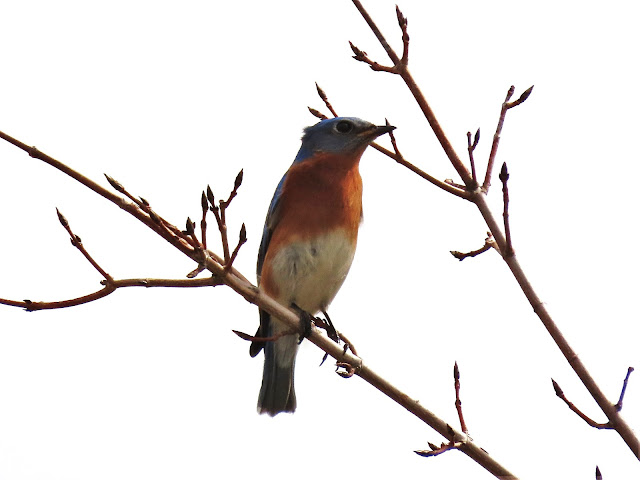 Song Sparrows (Melospiza melodia) are no less determined to perpetuate the species. 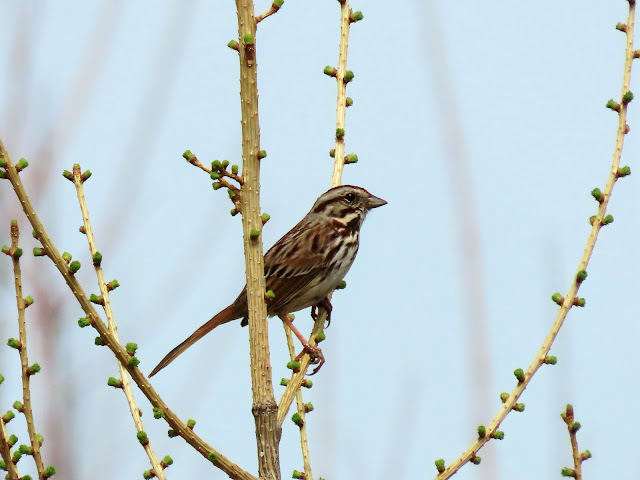 The highwater mark of this visit was our first Field Sparrow (Spizella pusilla) of the spring, a robust singing male. 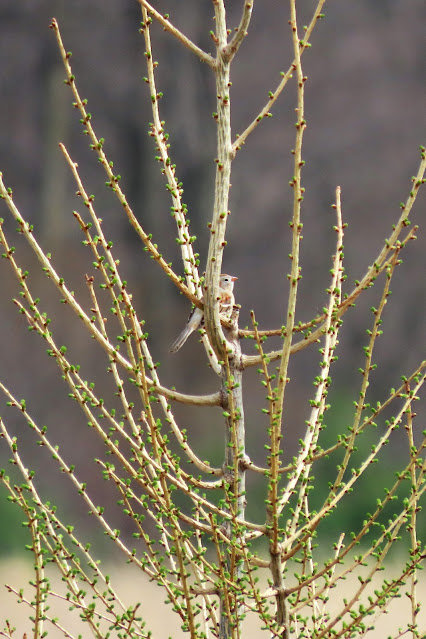 Even at a distance the pinkish bill of this species can be seen. 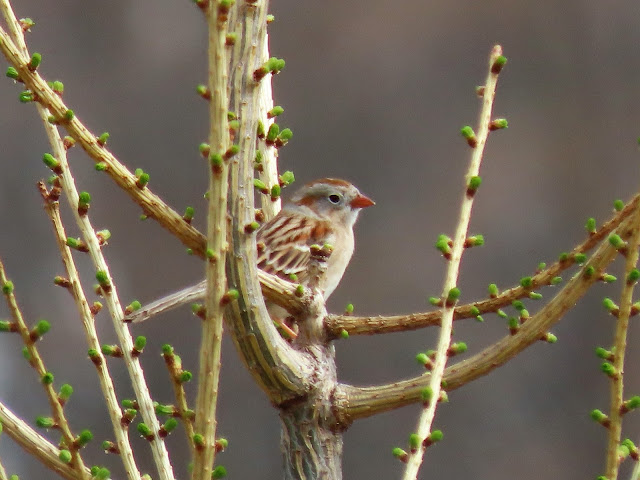 In some individuals the colour is very pronounced and in older field guides has been described as "bubblegum pink". 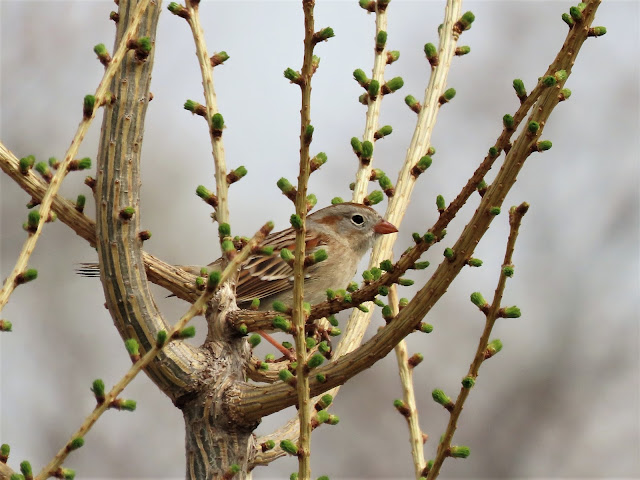 I find this species exceptionally appealing and there is always a level of contentment at seeing the first bird of the spring. 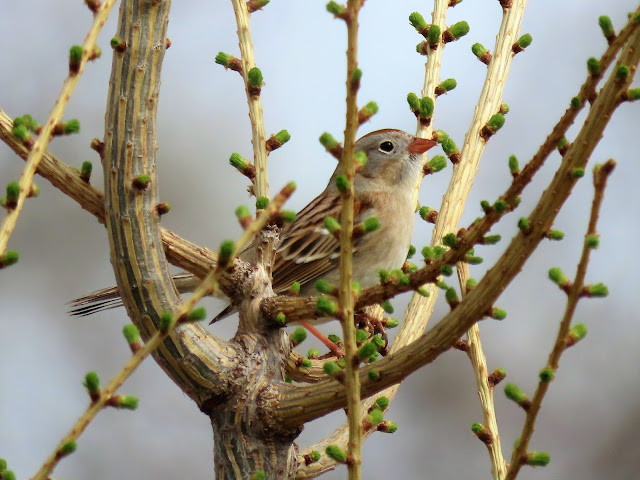 Its song is very pleasant and has been likened to a bouncing ball. 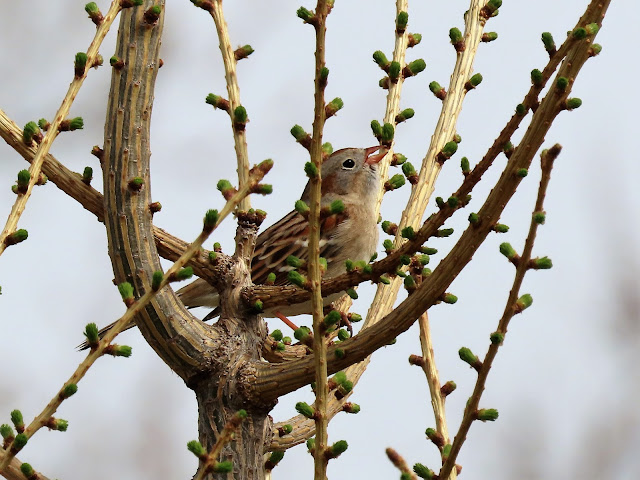 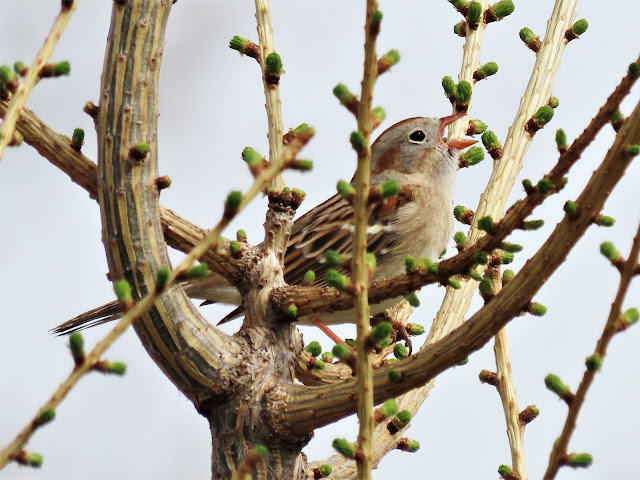 We were actually back in the car ready to leave when we spotted this bird, so it was a very satisfying way to end our visit.
Until the next time, happy enjoyment of nature!
Posted by David M. Gascoigne, at 13:15

Privacy: Travels with Birds is a personal blog written by David Gascoigne, with an occasional post by Miriam Bauman.
This blog accepts no form of paid advertising.
It reflects honest relationships and no personal information about any of its readers is shared with anyone. Google uses Cookies and by reading this blog you acknowledge this fact and consent to their use.
Upcoming Events
A very brief outline is given below. Please contact me for more details at davidmgascoigne@gmail.com
Obviously people not living in this area need read no further.
Friday 21 May 2021
Presentation to Women's Probus Club of Cambridge, Cambridge, ON Topic: Sex and the Single Bird.
Wednesday 21 July 2021
Presentation at Idea Exchange, Cambridge, ON
Topic: Urban Birds