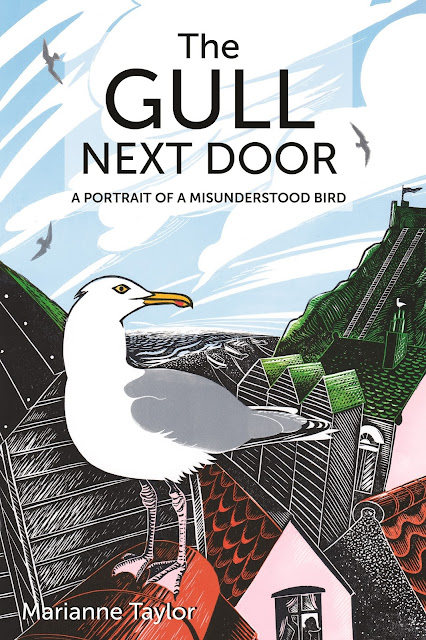 When I first saw this book, I was impressed by the cover! What a delightful, colourful image!
Marianne Taylor is a popular natural history writer, easy to read, known to present technical details in simplified terms to make them accessible to the general reader. In this book she succeeds in this aim.
For my taste she gets a little too folksy at times, repeatedly referring to North America as "across the pond", for example. Once is fine perhaps, over and over gets a little tedious.
In presenting the gull as a misunderstood bird, she tugs at my sensibilities, however, and anything that can be done to rehabilitate the image of this much maligned bird wins my vote. There are many species of gull, of course (never seagull!), but the principal focus of Taylor's book is the Herring Gull, Britain's most common species, and the one most often encountered and maligned by intolerant humans. Those same humans are often the architects of their own misfortune. City dwellers on a day's excursion to the coast go out of their way to feed gulls, applauding  their aerial acrobatics as they snag food in mid air, and rejoicing in the proximity of a gull taking a morsel from their outstretched hand, only to vent their anger when their sandwich is snatched from them on its way to their mouth.
As we have encroached on gull habitat and built upon their natural nesting areas, or taken over their beaches, gulls have taken to nesting on the roofs of houses and commercial buildings, to the delight of a few, but to the dismay of many. Measures are in place to prevent them from using these substrates, and as a result gull numbers in virtually all species are  declining, sometime precipitously so.
Taylor makes the point that we need to acknowledge the reality that we have to share this planet with other species, that we have to accommodate to their choice to use the last remaining places where they may live out their lives and breed successfully. The obliteration of nature is not, nor should be, an option that thinking people contemplate. It may not always be easy to live alongside gulls, but we have to accept the fact that minor inconvenience is a small price to pay for ecological integrity.
As a direct result of anthropogenic actions ocean temperatures are warming, the seas are filled with plastic, the food chain is being disrupted and gulls (and other seabirds) are facing more than enough challenges without humans imposing additional persecution.
The final chapter is a sombre recognition of the stark impacts of disastrous climate change, and the effect it will have on all species, including our own. Any way that we can remediate the damage done, including the restoration of functioning ecosystems, will benefit human and gull alike. Time is running out, however.
To paraphrase another famous statement concerning human injustice, "Can't we all just get along?"
The Gull Next Door - Princeton University Press
Author - Marianne Taylor
Hard cover - £20 - US$24.95
ISBN 9780691208961 - Published 27 October 2020 - 192 pages - 6" x 9.25"
Posted by David M. Gascoigne, at 12:00