My good friend, Stewart Monckton, recently sent me a book called An Australian Birding Year, which, (combined with rereading my blog posts about visits to three states in 2018), set off a bit of a wave of nostalgia. It also triggered more than a little frustration over the fact that I was planning to return to Australia last year and was stymied due to COVID, and I will be unable to do it this year for the same reason. When this accursed pandemic first gripped the world, who would have thought that it would cancel travel plans two years in a row? And it is not over yet, unfortunately. Vaccines are now available, but there seems to be one roadblock or another in the way of actually getting people vaccinated.
I am going to share with you a few random memories, in no particular order, and none having greater significance than another - but all precious.
Lake Wollumboola
On our penultimate day in New South Wales, before moving on to Tasmania, we stopped to do some birding and have lunch at Lake Wollumboola near the town of Culburra.
The sheer variety of birds there impressed me greatly, and it was a warm, sunny day, with Black Swans (Cygnus atratus) gracefully sailing by, or taking care of their toilette close to the shore. 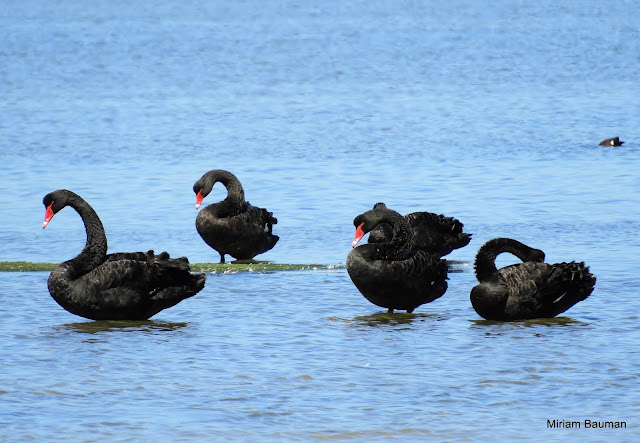 There were herons and egrets, sandpipers and plovers, stilts and currawongs. It was quite magical really, and the pictures below will give you a sense of what we enjoyed. 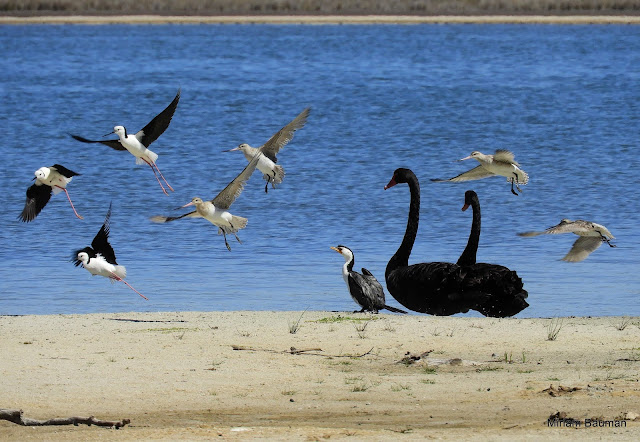 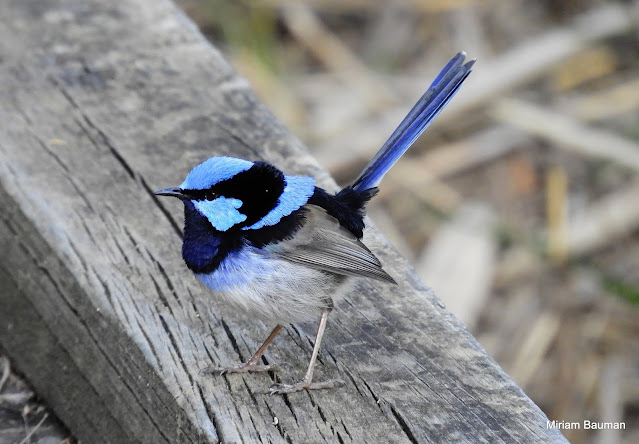 Superb Fairywren (♂)
They truly are marvelous feathered creatures, tiny but pugnacious and fearless, a wonder to behold. 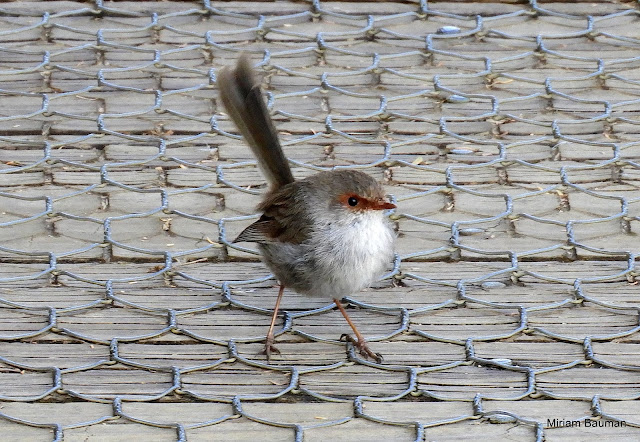 Superb Fairywren (♀)
Pairs remain socially monogamous, but are sexually promiscuous in the extreme; 70% of all eggs in a nest are the result of extra pair copulations.
When soliciting a female the male often carries a yellow petal as a gift. How could she resist you might ask? And she seldom does!
White-bellied Sea Eagle (Haliaeetus leucogaster)
Just as we were leaving Adventure Bay in Tasmania, after a successful venture to see the critically endangered Swift Parrot (Lathamus discolor), Miriam spotted a magnificent White-bellied Sea Eagle overlooking the blue waters of the bay. 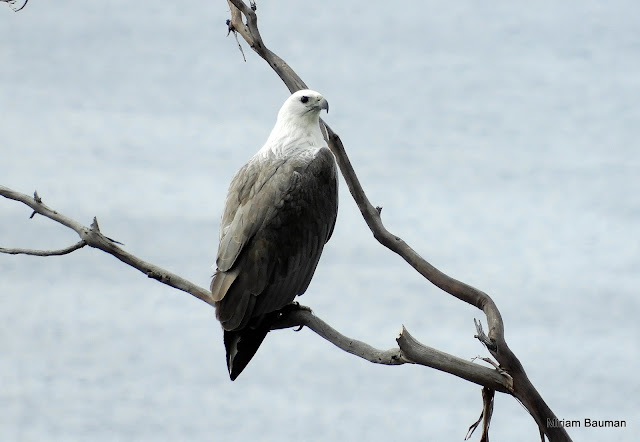 We were thrilled!
This species is not uncommon in coastal Australia, but we saw it infrequently and other than this sighting always in flight.
It is an opportunistic feeder, specializing mainly in aquatic vertebrates including fish, reptiles, birds and mammals, but it will also capture crustaceans, and does not eschew tideline carrion.
In acknowledgement of its star attraction for Canadian birders it posed for us beautifully, and was still in position when we left.
Rainbow Lorikeet (Trichoglossus moluccanus)
If you fail to be dazzled by this bird you had better check whether you have a pulse! 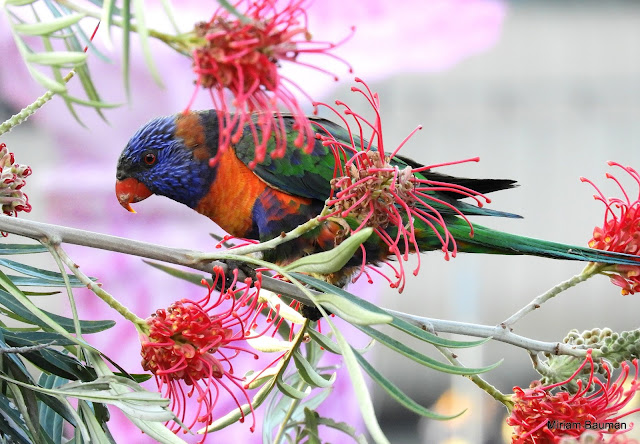 In country renowned for its parrots, with so many colourful species, Rainbow Lorikeet stands out as a champion of ostentation.
It is gregarious, friendly and has quickly learned how to take advantage of humans willing to bring food in exchange for a picture or two. This is another species that we saw frequently but were gobsmacked every time.
On the day before our departure from Melbourne for Hong Kong  and thence onwards to Toronto, we enjoyed the company of a small troupe of these characters in Brimbank Park in Melbourne.
We were glad to see them enjoying life in their own special way! Over and over! 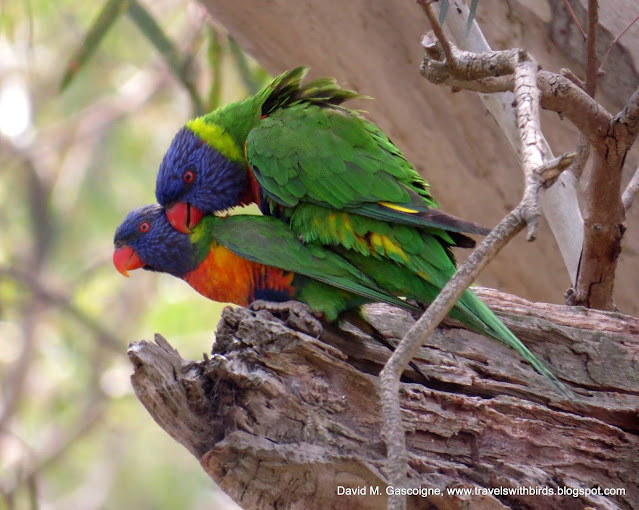 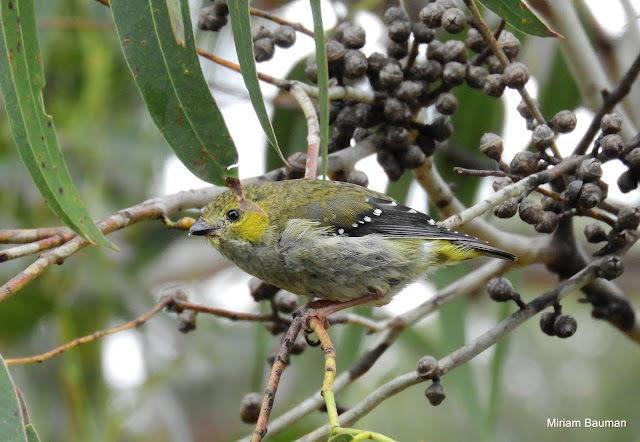 We had booked our stay on Bruny Island at Inala, that legendary haven owned and operated by Dr. Tonia Cochran, and a place where encounters with this diminutive species are almost guaranteed. Tonia has done more than any single individual to foster a breeding (and growing) population of these birds at Inala, and it was an honour to meet her, and have our fees help in the attempt to secure the future of this species. In the annals of ornithology Tonia will be earmarked for distinction. 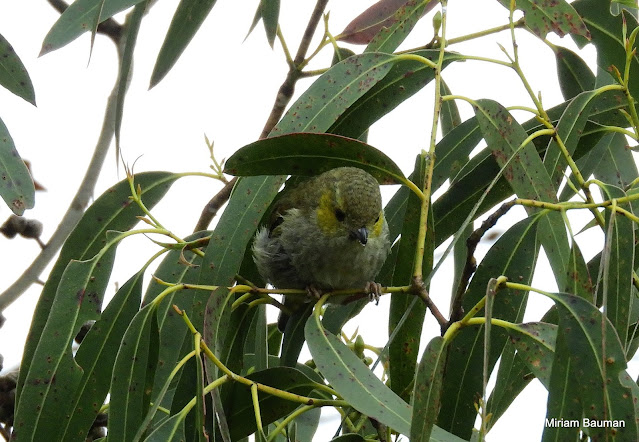 True to form we observed several Forty-spotted Pardalotes feeding on our first afternoon at Inala. It was grey, gloomy, wet and very cool, but nothing could diminish our great pleasure at seeing this bird.
There were many other highlights at Inala but this was the most special of all.
That's probably enough wallowing in the well of remembrance for now, but I am in love with Australia - with its birds, its monotremes and marsupials, with Stewart, Sally, Hamish and Pippa, with friendly people, with its wine, glorious wine, with Prosecco in the garden, with Lamingtons and Tim Tams, fish and chips and skinny lattés, cheese, and so much more - Vegemite not so much!
One day, I vow to get back there again - COVID willing! Of that you may be sure.
Posted by David M. Gascoigne, at 14:41