A Snowy Owl (Harfang des neiges) and Other Birds

29 November 2020
Miriam and I were deciding where we would go for a walk on an uncharacteristically sunny November day, when a telephone call from Jim and Francine announced that they had located their first Snowy Owl (Bubo scandiacus) of the season. They gave us precise directions to its location, and since Miriam finds this species enigmatic above all others, our die was cast. We got in the car and headed for Wellington County.
The bird, a handsome female, was exactly where Jim and Francine had found it. 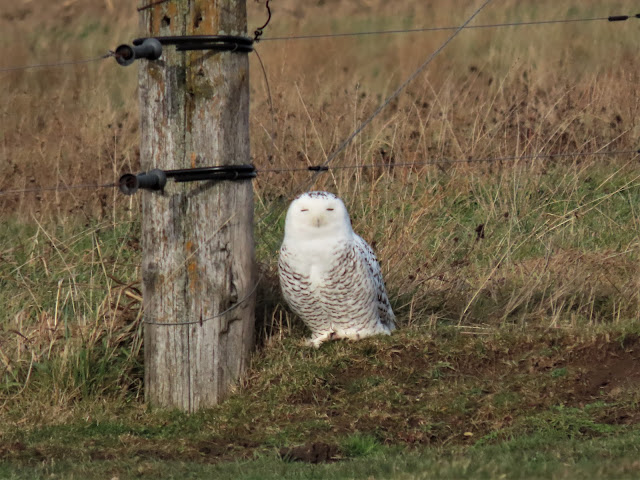 The temperature hovered around seven degrees, and without a speck of snow to act as camouflage, the bird was not difficult to see.
It was constantly surveying its surroundings, no doubt looking and listening for rodent prey. Owls are able to swivel their heads 270 degrees, and it would go from appearing to look right at us, to showing the back of its head. 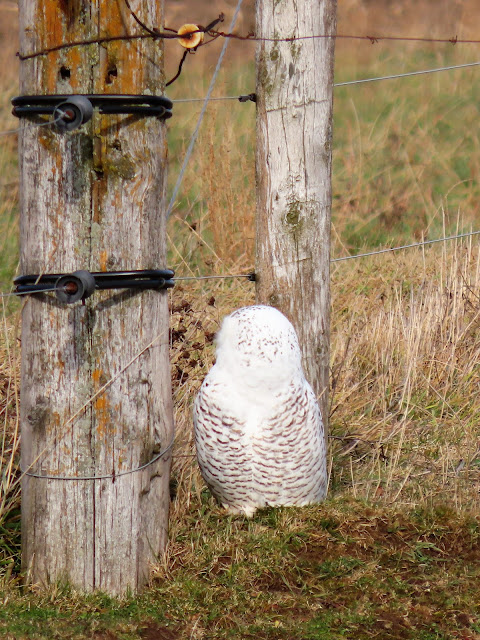 It preened a little, paying attention to all its feathers, including those down on its feet. 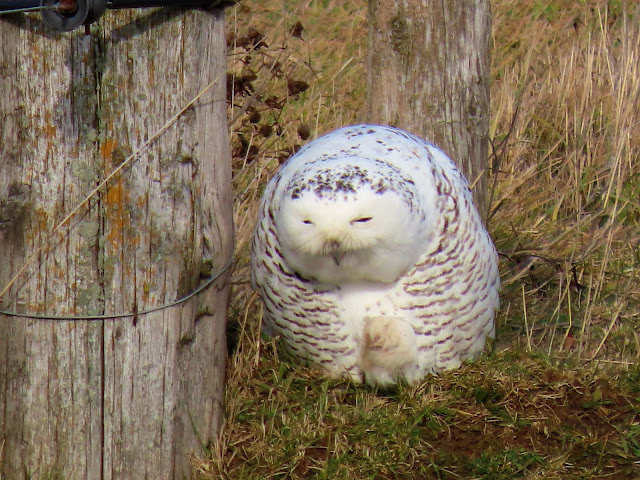 Birds are known to be able to sleep with one eye open, as this owl seemed to do so from both the right and the left, while still being alert to any sign of danger. 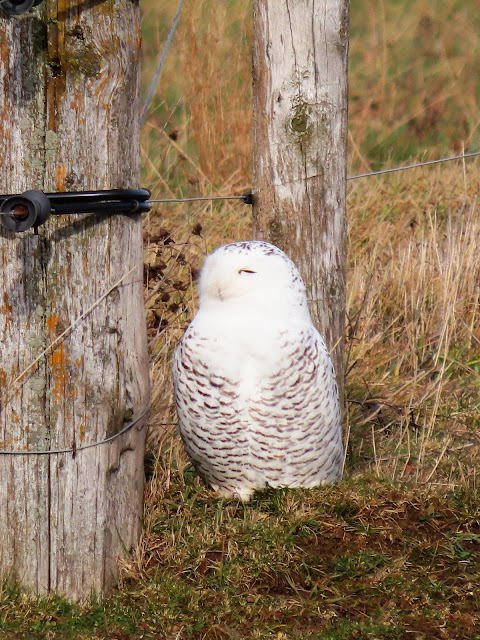 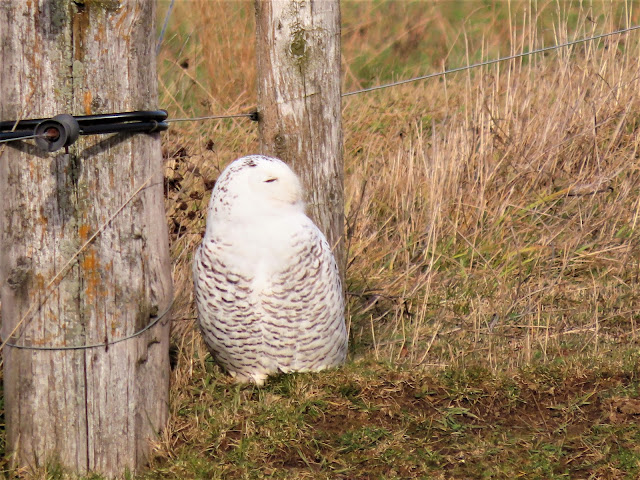 We watched the bird for about a half hour; finally Miriam reluctantly agreed that we should move on. 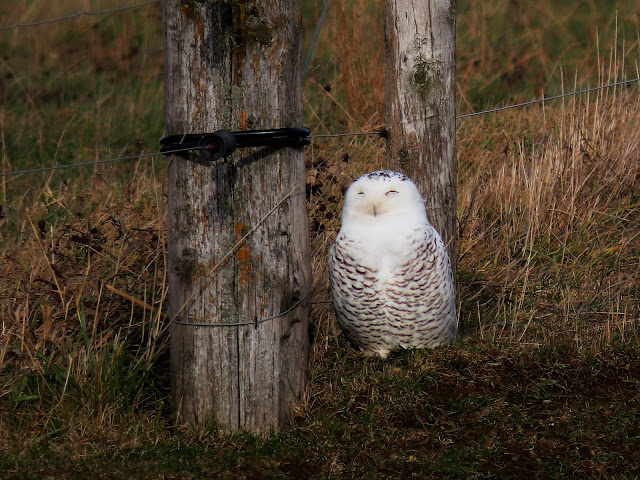 I don't think she can ever get enough of a good thing!
This sighting was actually on the rural road where Miriam lived on a farm during her early childhood, not far from the Conestogo Dam to where we headed next. 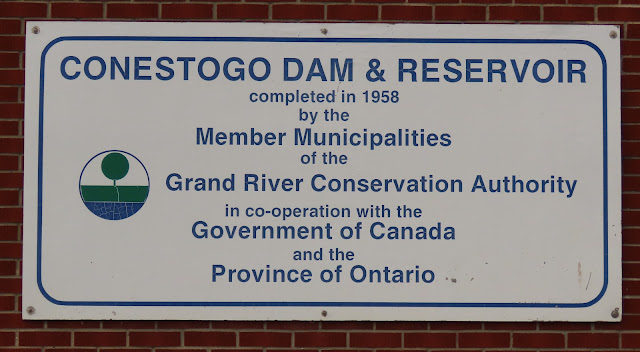 Before getting to the dam proper we pulled off on a wide shoulder to scan the reservoir. 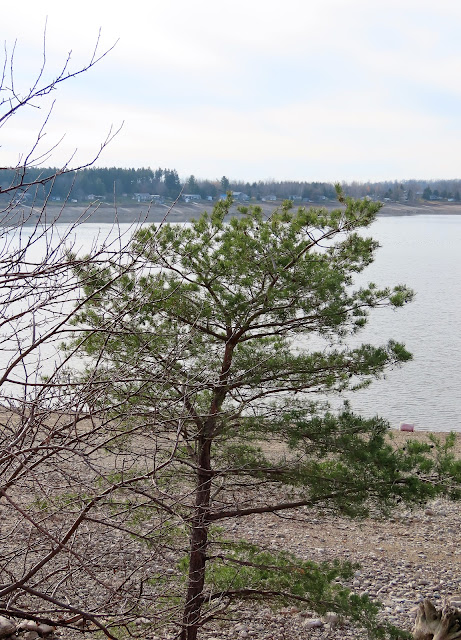 The dominant species on the water was Common Merganser (Mergus merganser) and the number was simply staggering. 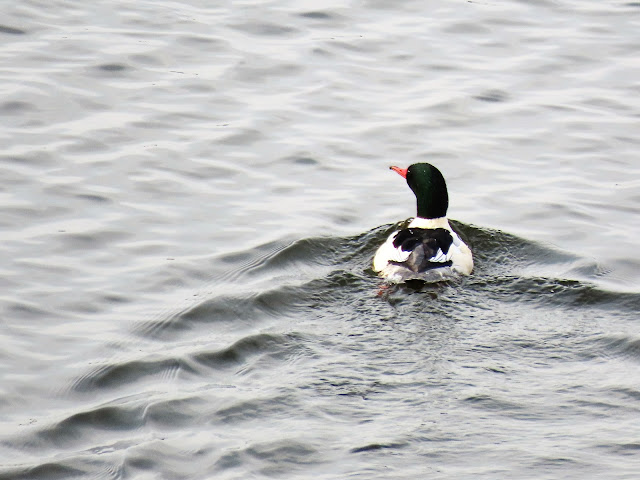 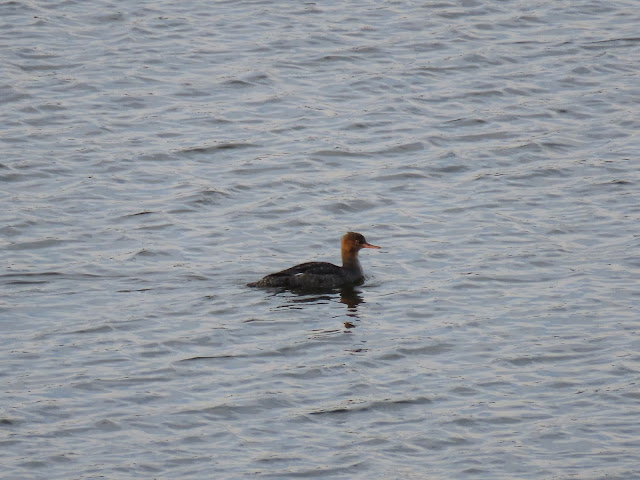 Common Merganser ♀
Males clearly outnumbered females, by a substantial margin, and we estimated that a thousand or more individuals was a conservative count. The following pictures will convey an impression of the density of mergansers present, and there were other species alongside them too. 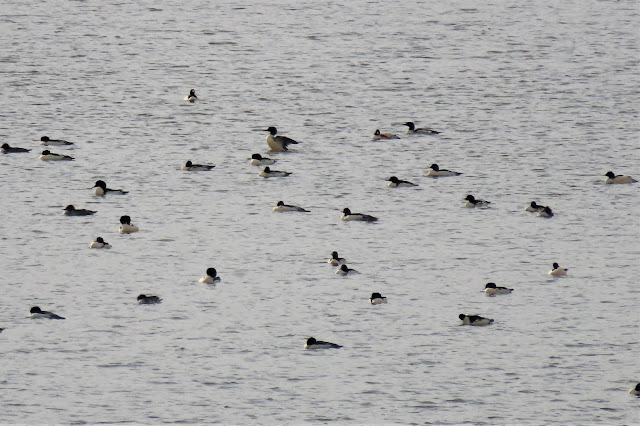 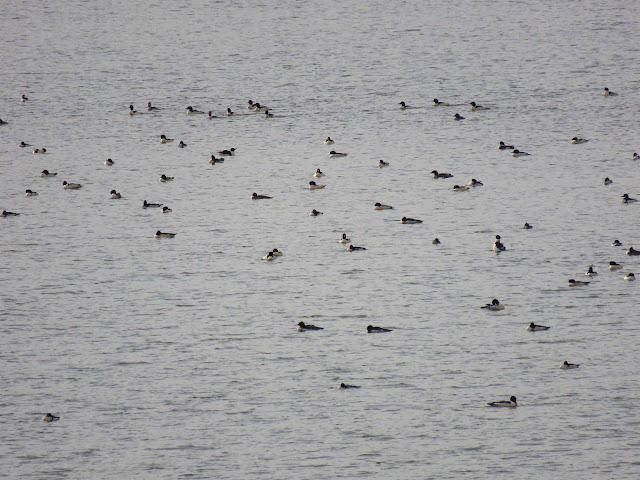 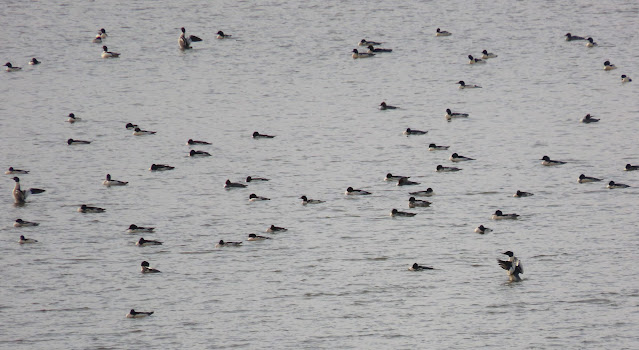 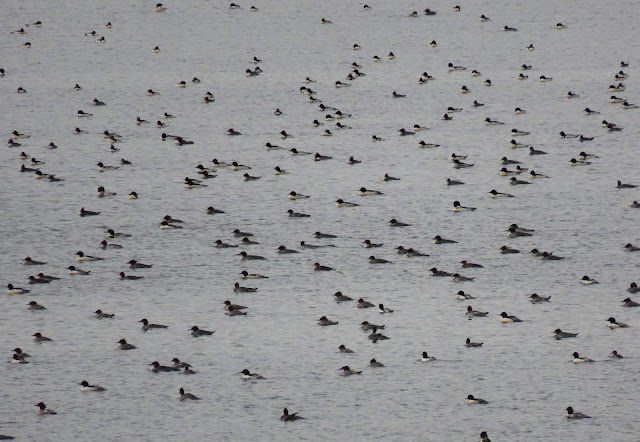 It was a grand spectacle that we enjoyed immensely.
We saw only one Common Goldeneye (Bucephala clangula), but it is more than likely that we missed a few others, intermingled in the ever-moving mass of mergansers. 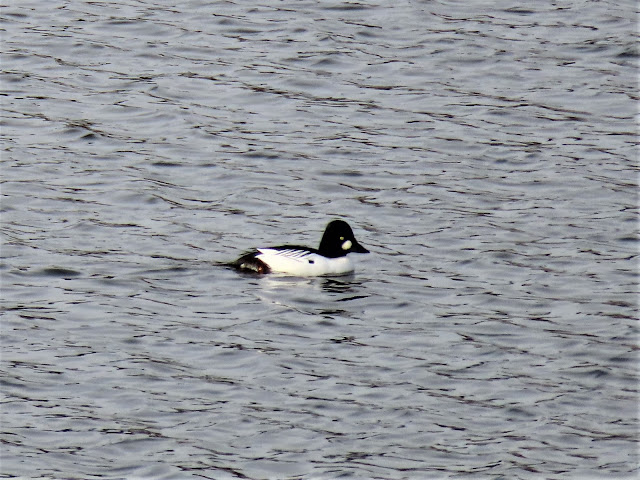 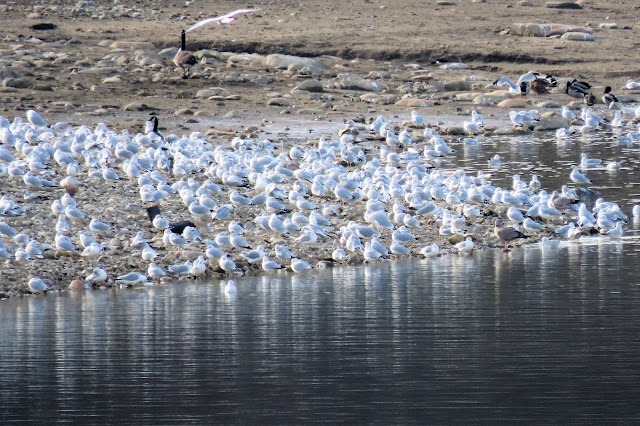 ..... as were Canada Geese (Branta canadensis). 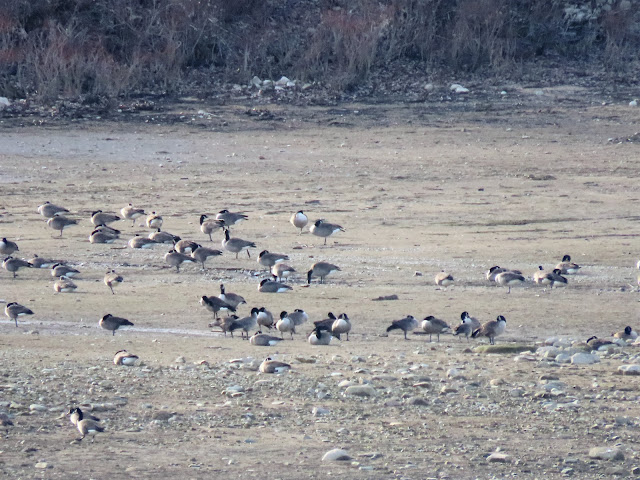 And they seemed to enjoy the same stretch of shoreline together. 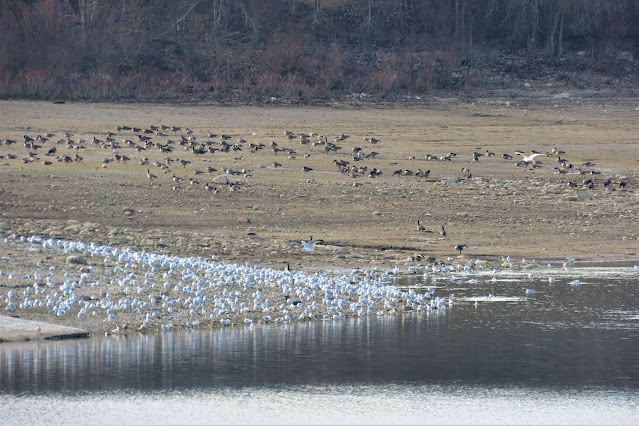 A Mennonite buggy passed by us, bespattered and in need of a good clean. That chore will doubtless be added to someone's list of tasks once the sabbath is over. 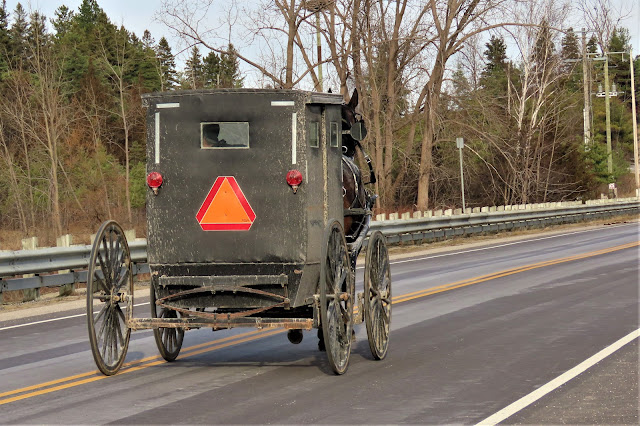 Downstream from the spillway there were groups of ducks and gulls. 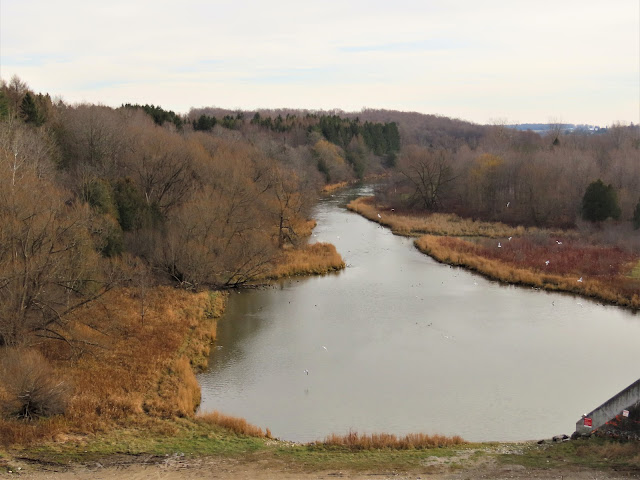 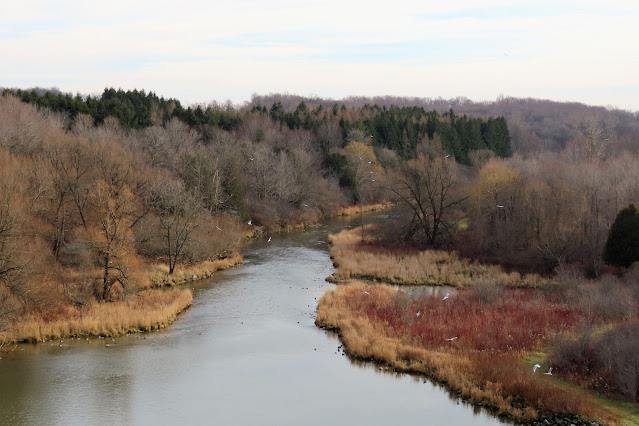 Mallard (Anas platyrynchos) was the commonest duck, although some mergansers sought their company, away from the mass of their congeners on the other side of the dam, and a small group of American Black Duck (Anas rubipres) remained aloof, too far out for a photograph. 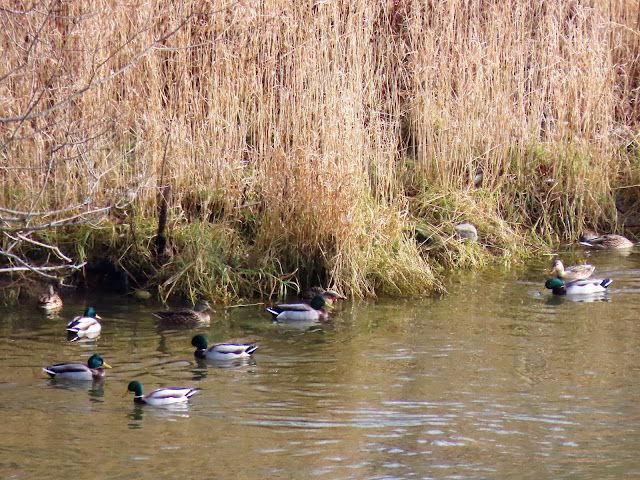 Ring-billed Gull was far and away the most common larid, but small groups of American Herring Gulls (Larus smithsonianus) made their presence known too. 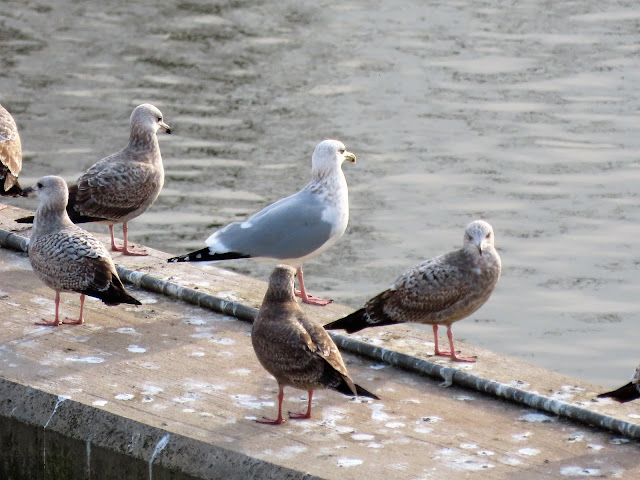 Sub-adult gulls of various ages and of different species seemed to favour each other's company. 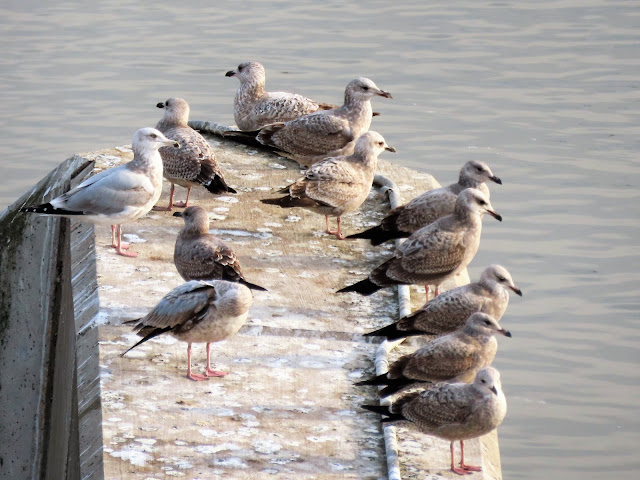 In years past I have seen both Iceland Gull (Larus glaucoides) and Glaucous Gull (Larus hyperboreus) at the Conestogo Dam, but try as I might today, I was unable to detect either of these species of any age. Perhaps it is a little early and as winter advances they may show up.
Bald Eagles (Haliaeetus leucocephalus) verge on predictable here and no sooner had Miriam and I expressed surprise that that we had not seen one, this individual came into view. 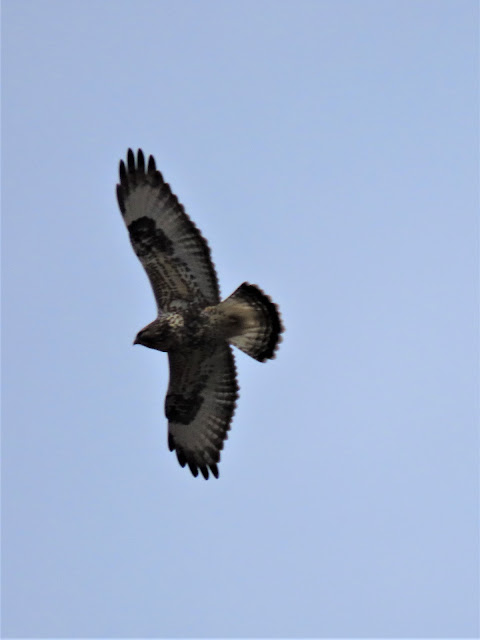 The plumage gives every indication that this is a bird fledged this year. 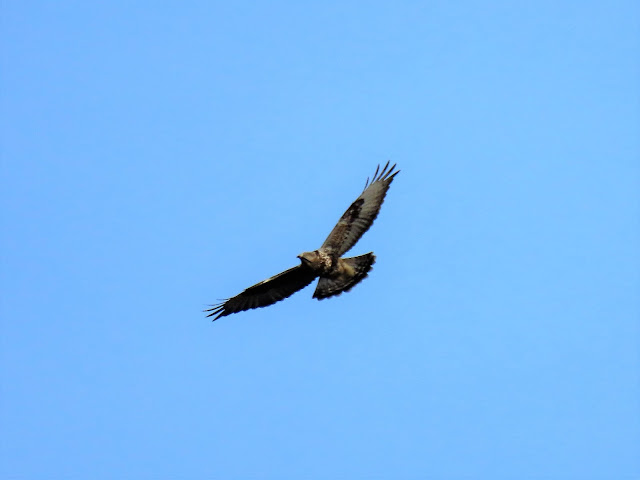 There is no shortage of prey at the Conestogo Dam and Reservoir, both fish and ducks being in great supply, with ample conifers for roosting, so this bird has the potential to grown strong and healthy as it perfects its hunting skills. 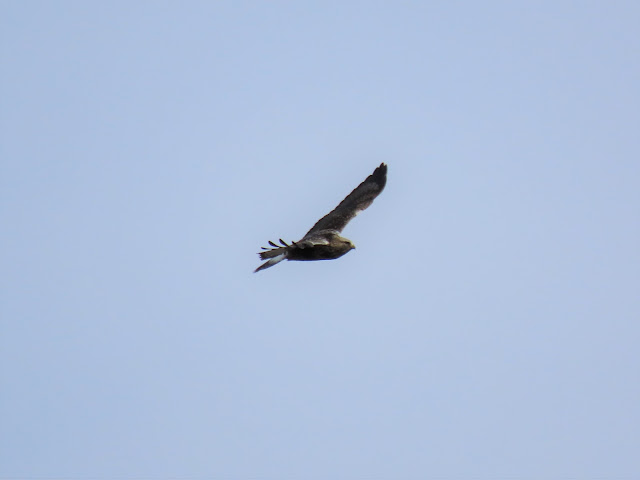 May it live long and prosper.
Posted by David M. Gascoigne, at 10:00