The Dreaded, Unwelcome Gypsy Moth - It's Here to Stay

A few days ago we were sitting on the deck at our friends Alan and Anne Morgan's house, gazing at, and admiring Anne's garden which is a phenomenon to behold, sipping wine and talking of all things under the sun.

At some point our attention was rivetted on a female Gypsy Moth (Lymantria dispar) on an oak tree (Quercus sp) and the conversation quickly changed to this invasive insect, which is present in seemingly apocalyptic numbers this year. I know that memory is selective, but I cannot recall seeing Gypsy Moths in such profusion.
Having been introduced to North America in 1869 in Boston, it has become a serious pest and is capable of deforesting vast areas of native woodland. Stephen Marshall recounts an incident where he was seated under a tree at a picnic table and was driven away by the pitter-patter of frass (bug poop) falling from the caterpillars on the branches above onto the table and into his coffee! 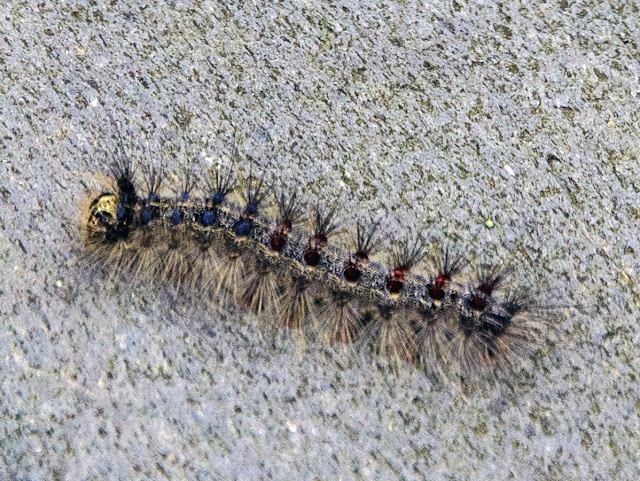 Let me try to give you a little more insight into this entirely unwelcome guest.

Hosts: Gypsy Moth caterpillars are especially fond of oak and aspen, but will opportunistically feed on other species as diverse as Hemlock, White Pine and Poison Ivy. The picture below shows females, egg masses, larvae and pupa on a Norway Maple. 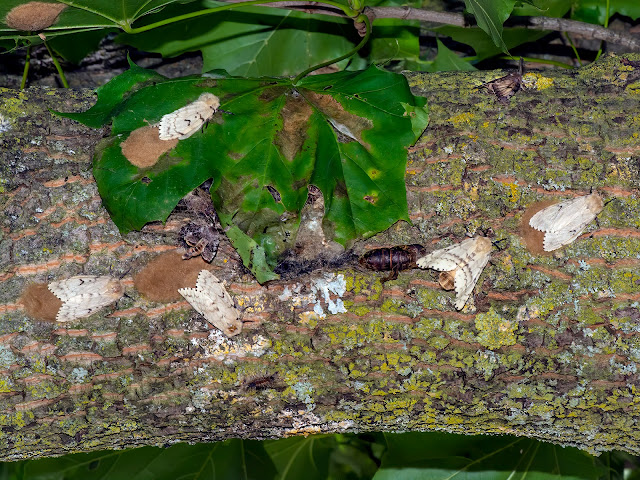 Damage: The larvae chew the leaves of their host plants during the spring, and the noise of an army of these creatures can become quite loud. Gypsy Moth is an outbreak species, sometimes persisting for two or three years, during which time trees can be seriously weakened and vulnerable to other pests such as the Two-lined Chestnut Borer (Agrilus bilineatus). 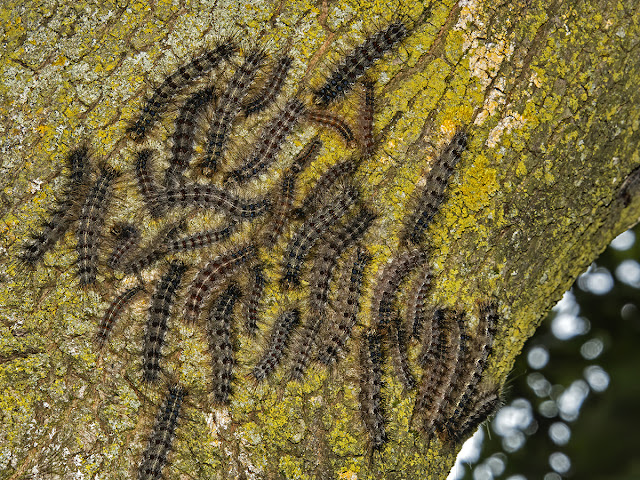 Distribution: Currently found over much of Eastern and Central Canada, the Northern U.S. as far west as Minnesota, and south to the The Carolinas. Isolated infestations have occurred in other regions when eggs have been transferred on plant materials. 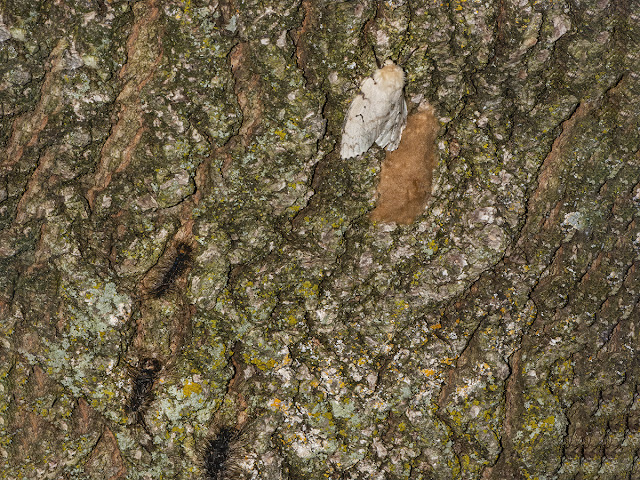 Appearance: Larvae are generally mottled grey and have pairs of coloured tubercules. The hairs on the body can be irritating to human skin. Male moths are dark brown with wavy darker markings across the wings. Females are flightless despite having wings that are white with wavy stripes.

Life History and Habits: The eggs overwinter in a mass covered with hairs from the body of the female. Exposure to cold is a requirement for egg development. Eggs usually hatch in April and the young larvae move to the tips of branches where they may be dispersed by the wind (ballooning). Males go through five larval instars, females six, over the course of about six weeks. Feeding occurs at night with the larvae moving to branches and trunks during the day to rest and moult. During serious outbreaks daytime feeding also occurs.

The larvae may settle on plants for pupation but will also wander and settle on rocks, other vegetation, upright surface of buildings or other convenient locations. Adults emerge about two weeks later. The male is a strong flyer but as noted above the female is flightless.
After mating, females lay a single egg mass, typically containing 250 eggs.