One of the locations where Miriam and I go with a degree of regularity is Three Bridges Road in St. Jacobs, and we often park there at the entrance to the Mill Race Trail which we walk quite frequently.
Right at that point there is a tree with a couple of suet feeders nailed to it, and there is a knee wall no more than a couple of metres long, where bird seed is often strewn along its length. We have no idea who constantly replenishes the suet, or who provides the seed. On very rare occasions we have seen an older guy (probably younger then me!) come and do it, but he seems a little taciturn, and simply does what he needs to do and leaves. We have never seen him stay to watch the birds come to the food that he has provided.
One can only assume that he is motivated by pure altruism and a love of other living things and we vigorously applaud this unsung hero.
Downy Woodpecker (Dryobates pubescens) is one of the species most commonly attracted to the suet.
This tiny woodpecker (15-17cm) is found over most of the northern part of the continent in a wide range of habitats. It readily comes to gardens and will feed on animal fat of any kind at a backyard feeder.
Today, both male and female were feeding on the suet. 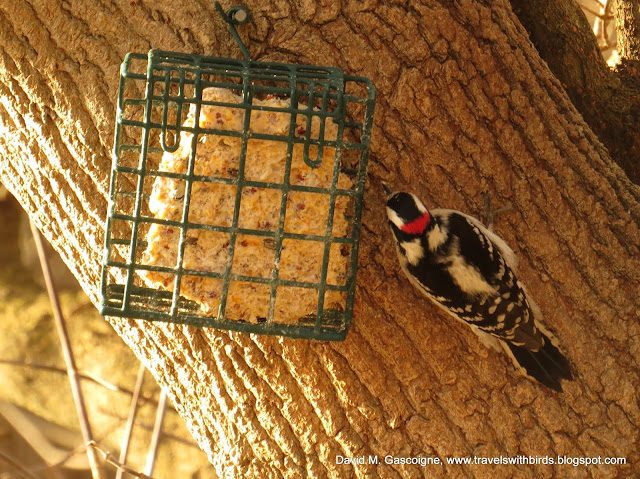 When feeding "naturally" they are active foragers, moving incessantly as they glean the bark for insects, spiders, and eggs living below the surface of tree trunks and branches. At the suet feeder, however, they remain for a while, and eat their fill of this available-on-demand high quality protein and fat. 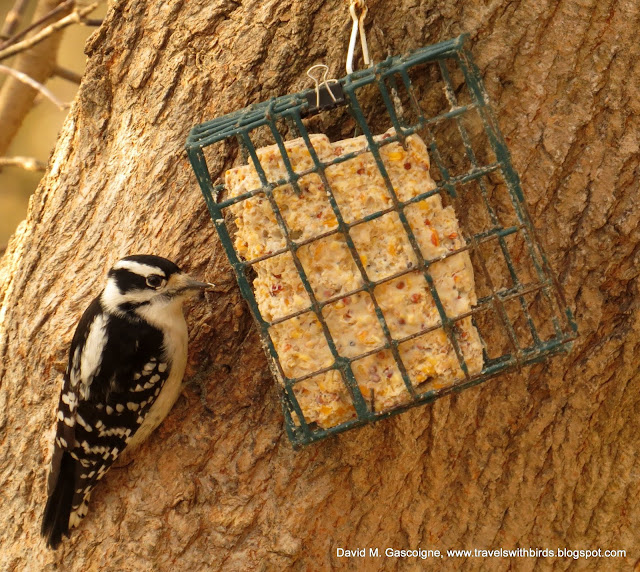 Sometimes one sees a bird with a deeply discoloured breast, ranging in colour from creamy to greenish to purple. Novice birders conclude they have a different species but it is no such thing. The colour of the substrate where they are foraging rubs off on their plumage, and since they delight in berries such as mulberries or pokeberries, a purple wash may be infused into their feathers.
Overall, because of its ready acceptance of a range of habitats, and especially due to its acceptance of a human modified environment, this species is doing well. It has even been known to feed from the hand of a human.
Downy Woodpecker is a very common species here. Common perhaps, but uncommonly delightful for sure.

Observation of a Downy Woodpecker by Henry David Thoreau on 8 January 1854, p.m.

Stood within a rod of a downy woodpecker on an apple tree. How curious and exciting the blood-red spot on its hindhead. I ask why it is there, but no answer is rendered by these snow-clad fields. It is so close to the bark I do not see its feet. It looks behind as if it had on a black cassock open behind and showing a white undergarment between the shoulders and down the back. It is briskly and incessantly tapping all around the dead limbs, but rare twice in a place, as if to sound the tree and see if it has any worm in it, or perchance to start them. How much he deals with the bark of trees, all his life long tapping and inspecting it! He it is that scatters these fragments of bark and lichens on the snow at the base of trees. What a lichenist he must be! Or rather, perhaps it is the fungi makes his favourite study, for he deals most with dead limbs. How briskly he glides up or drops himself down a limb, creeping round and round, and hopping from limb to limb, and now flitting with a rippling sound of his wings to another tree.
Posted by David M. Gascoigne, at 18:42