I was birding this morning at Bannister Lake with my brother-in-law, John Lichty. Our principal reason for visiting this excellent wetland was to see the Sandhill Cranes Grus canadensis that gather there each day to feed. Their numbers have become quite remarkable and there are numerous juvenile birds in transition to full adult status. Yesterday when Miriam and I visited we observed forty-five individuals; today John and I tallied thirty-one, although I suspect that had we waited longer the count would have increased.
The morning was filled with great birding moments and there was an interesting and diverse range of species.
Cooper's Hawk 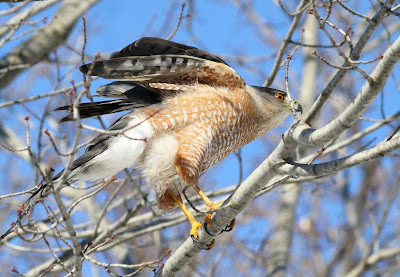 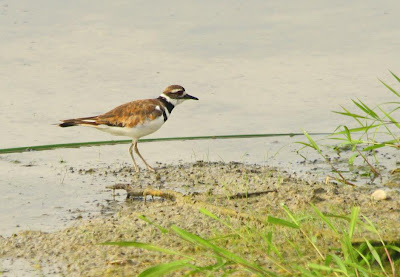 The premier event, however, was to watch the gripping aerial chase of a Cooper's Hawk Accipiter cooperii pursuing a Killdeer Charadrius vociferous. The manoeuvres of the Killdeer desperately trying to escape its attacker were a sight to behold. One does not normally associate such high speed twists and turns with this medium-sized plover but the threat of imminent death produced evasive tactics of great cunning and sophistication. It was all to no avail as the Cooper's Hawk matched the plover turn for turn in a masterful display of acrobatic skill and determination. Several times it almost closed in on the Killdeer only to have its quarry evade capture at the last moment with a split second tactic. The outcome was inevitable, nonetheless, (or so it seemed to us) as the Killdeer appeared to be tiring, but we did not see the actual kill. In some ways I am thankful for that but we were left in awe at the spectacle we had just witnessed. It is a grim, primal, but entirely normal part of the daily cycle of the natural world and we felt it a great privilege to see it. 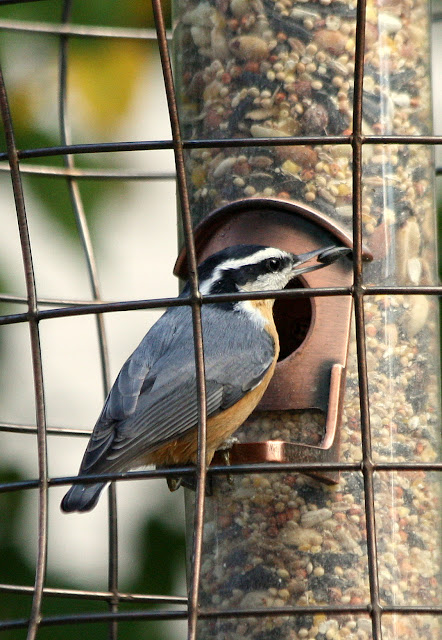 At this time of the year birds like nuthatches and chickadees are kept very busy gathering and caching food to prepare for the winter ahead when food will be in short supply. An adequate larder may well represent the difference between life and death, particularly in a severe winter with extensive snow cover. This individual was constantly at our feeders yesterday, gathering seed, only to return minutes later for more. The bird flew off in different directions, doubtless hiding food in many locations. This obviously reduces the possibility of losing all the food stored if a single cache is discovered by marauding squirrels for example. The flip side is that the birds must be able to remember many different storage locations and studies have in fact revealed that avian families that store food have at least temporary enhancement of the hippocampal area of the brain to facilitate this live-preserving skill.

For the past two years Bill Read, Jerry Guenther and I, and several other dedicated volunteers, have monitored the Chimney Swift Chaetura pelagica roost at the above location. This school is a marvelous old heritage building (built in 1888), still in use as a school today. From what we have been led to believe it will continue to be used as a school for one more year, following which it is scheduled to be developed as condominiums. It is our fervent wish that whatever the plans for the building, provision is made to leave the chimney intact.
Apart from sporadic visits during the day we have only monitored the chimney at dusk. We have a pretty good record now of the numbers of birds that use the chimney as a roost but little information as to whether any pairs have used the structure as a nest site. It seems likely that this would be so.
For anyone craning their necks skywards the signature flight of mated pairs of this aerial species is easy to detect. The birds will snap their wings into a distinctive "V"and fly closely together one behind the other.
As dusk approaches the sky which only moments before contained but a few birds is suddenly a whirling, cavorting, chattering mass of birds showing the most incredible flying skills one could ever imagine. It is truly an event worth making an effort to see. It is in my opinion one of the great spectacles that nature provides. The birds swoop tantalizingly close to the chimney and seem to make a feint at going in but bank sharply and rejoin the maelstrom. Then, on some cue perhaps, unknown to us, a few birds start to enter the chimney, plunging in at breakneck speed. We struggle frantically to maintain the semblance of an accurate count as more and more individuals enter in ever greater groups. Within five to ten minutes it is all over and the skies are empty of swifts.
Chimney Swift roosts may contain as few as twenty or thirty birds or as many as several thousand. Our maximum count this season was a little below five hundred, fully recognizing that there is a margin of error in the count. Given the fact that, for the most part, the same people do the count in the same way we believe that the margin of error is basically the same from night to night, so the figures stand up to scrutiny.
We would encourage anyone interested to join us next August when swifts seem to come from other locations to use this roost. It will provide great entertainment and not a little insight into the natural world. 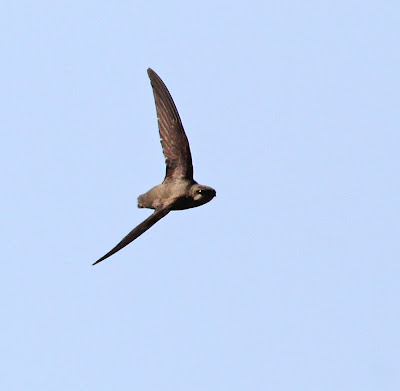 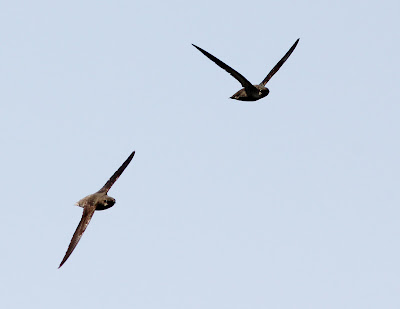 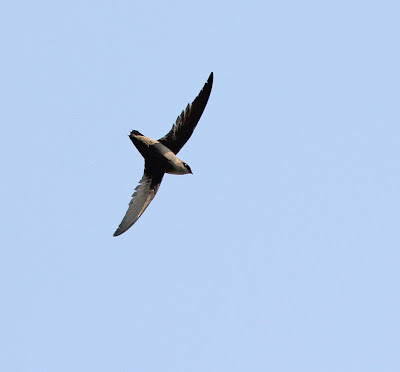 My wife is the photographer in the family and she struggled mightily to get a few decent pictures but without success. The pictures shown here were taken by David Beadle ( http://www.flickr.com/photos/10821818@N07/5784283872/in/set-72157626803952828 ) and he has kindly given us permission to use them. They are remarkable studies of a species notoriously difficult to photograph. We owe David a great vote of thanks.

Beginning in the early nineteen sixties the future of the Peregrine Falcon, Falco peregrinus looked very bleak indeed. Organochlorine pesticides and other insidious chemicals were wreaking havoc on the breeding success of this magnificent raptor. Birds were laying thin-shelled eggs which were unable to sustain the weight of the brooding female and wholesale desertion of eyries was occurring. Stated plainly, the species was unable to reproduce – a sure path to extinction. DDT was the primary villain in this saga of bio-accumulation and bio-magnification of pesticide residues.
Rachel Carson was boldly sounding the alarm in her classic work “Silent Spring” and was coming under sustained and perfidious attack from the vested interests of the petro-chemical conglomerates who were profiting hugely from the sale of these noxious substances, even though they clearly posed long-term hazards to human health. Bravely she persevered and DDT was ultimately banned in North America (although it is still used elsewhere in the world).
With significant intervention from a dedicated team of falcon researchers the species slowly recovered. Peregrines had for many years used skyscrapers in cities as suitable substitutes for the remote cliffs they historically frequented as their breeding haunts. This phenomenon appears to be more common than ever and it seems that Peregrine Falcons that fledge successfully in cities return to breed in a similar situation. There is a ready source of food, especially the ubiquitous pigeons and starlings which every city has in abundance.
At the Sun Life Financial Tower in Waterloo a single Peregrine was raised successfully by a dedicated pair of parents and has migrated south for the winter. Many hazards still lie in wait for this young bird (named Sunny, by the way) but we earnestly wish that he will conquer all perils that confront him and return to breed one day.
Without doubt, the whole sequence of events from first hint of nesting to Sunny's first flight, provided many hours of entertainment and not a little education for many people previously unaware of this fastest animal on earth.
Let us all hope that Peregrine Falcons are never again threatened with oblivion. May we share this planet together in harmony, with respect for all living things. Note: I was never able to get a good photograph and the picture above was taken by Leslie McCollum in Imperial Beach, CA of a falcon about which she wrote a book, that has returned to her neighborhood for five consecutive years. Leslie has a long and dedicated history of working with raptors and has a love not only for them but for every facet of nature, however big or small. I am proud to call her my friend.
Posted by David M. Gascoigne, at 14:06 No comments: