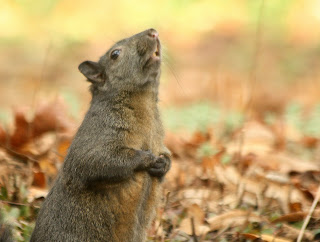 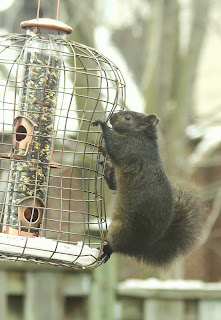 Squirrels at the Feeder
I think we have finally found a feeder that defeats the squirrels. One of these little fellows, having tried mightily to get to the seed, looks like he is seeking divine intervention!
Posted by David M. Gascoigne, at 10:11 No comments: 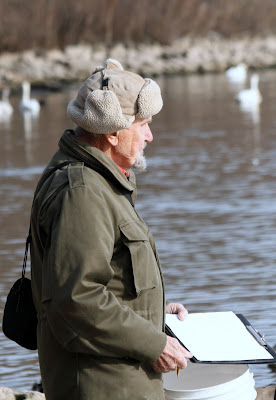 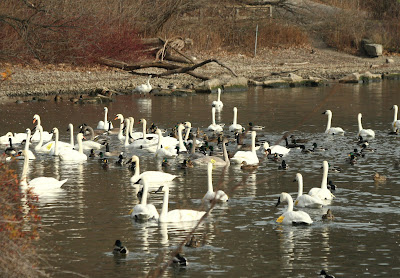 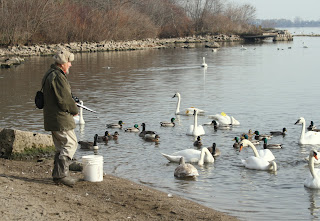 Harry Lumsden
On 3 December while birding along the north shore of Lake Ontario, I ran into Harry Lumsden at LaSalle Park in Burlington. I had not seen Harry in a few years, not since we both belonged to the Richmond Hill Naturalists Club together. It was a pleasure to know that even approaching ninety years of age Harry is still active and continuing to work with his beloved Trumpeter Swans. On this day he was doing research into intra and inter specific patterns of aggression. When Harry retired from his position as a biologist with the Ontario Ministry of the Environment he made it his mission to reintroduce the Trumpeter Swan to Ontario, where it had been extirpated by over-hunting in the early twentieth century. After many initial setbacks the programme has been a resounding success, for which Harry was awarded the Order of Canada, our nation's highest civilian honour.
Posted by David M. Gascoigne, at 06:33 No comments: