The arrival of a Western Cattle Egret (Bubulcus ibis) in nearby Hawkesville was a source of considerable excitement and pleasure for local birders, and attracted numerous visitors from farther afield too. 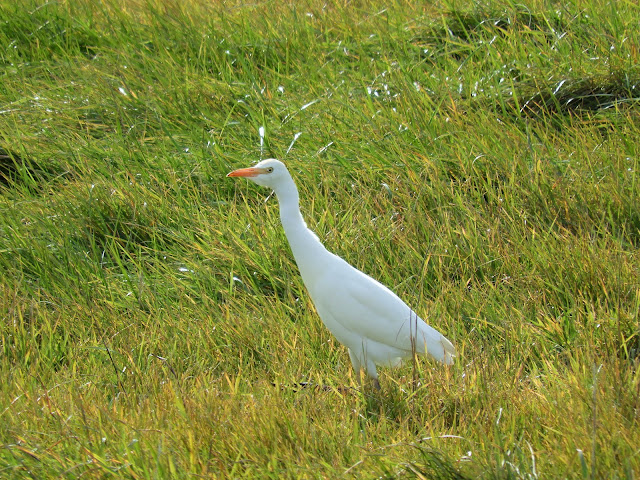 This bird appears healthy and has now been present for a little over a week since first being discovered, on 31 October to the best of my knowledge.
The weather has been so uncharacteristically mild of late (yesterday the temperature nudged 20 degrees) that there appears to be an abundance of grasshoppers and other insects even this late in the season, and the bird was feeding successfully. 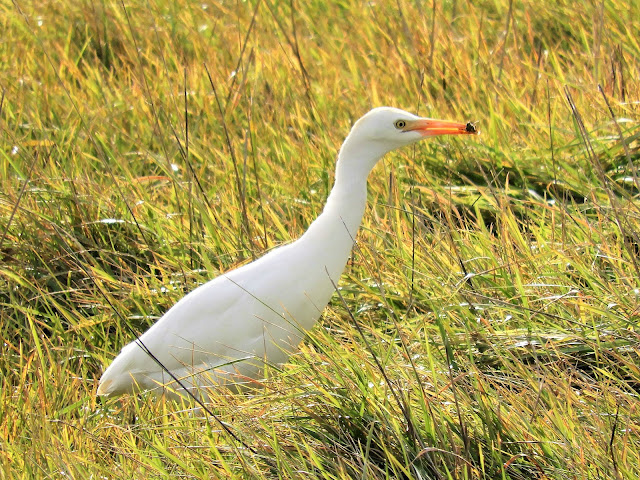 The only other time that Miriam and I have seen this species in Waterloo Region was on 21 October 2016 on Streicher Line in Wellesley Township. Given the timing of the two sightings, this perhaps indicates some form of post-breeding dispersal. 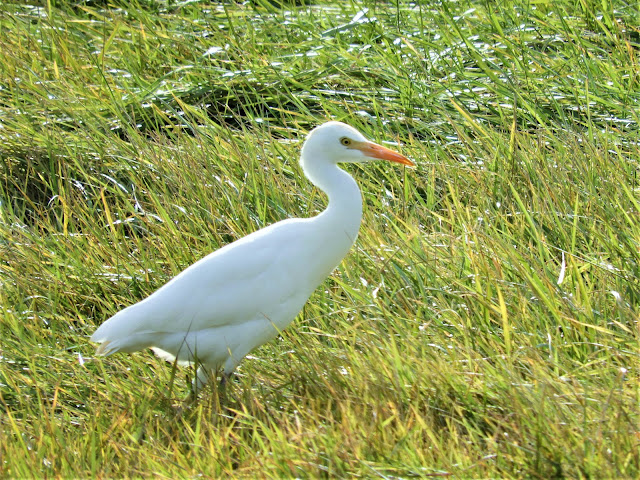 Cattle Egret has an interesting history of translocation from the grasslands of Africa, where it followed the huge herds of ungulates, to ship-assisted passage to South America, where it quickly became established. Progression northwards occurred almost right away and North America was colonized, to the point where Cattle Egret is now the most numerous heron. As early as 1974 there were over 400,000 birds in the eastern USA alone. (The Herons (2005), Kushlan and Hancock). 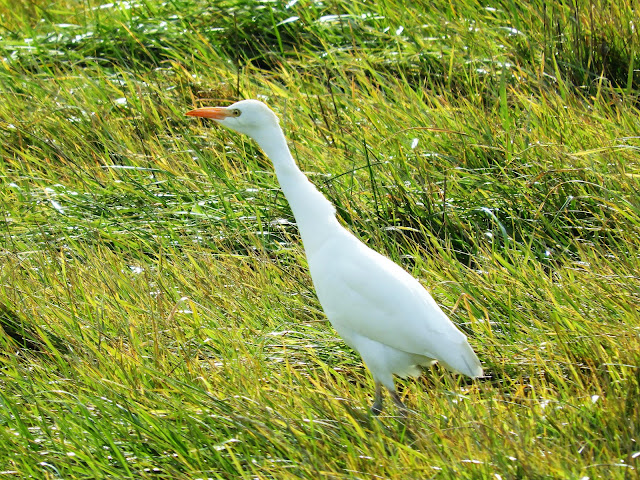 Similar colonization has occurred in Europe and Cattle Egrets are being sighted with increasing regularity in Britain. This follows the recent success of Little Egret (Egretta garzetta) in establishing a population there, and Great Egret (Ardea alba) seems destined to follow.
Herons, one might conclude, are avian pioneers! 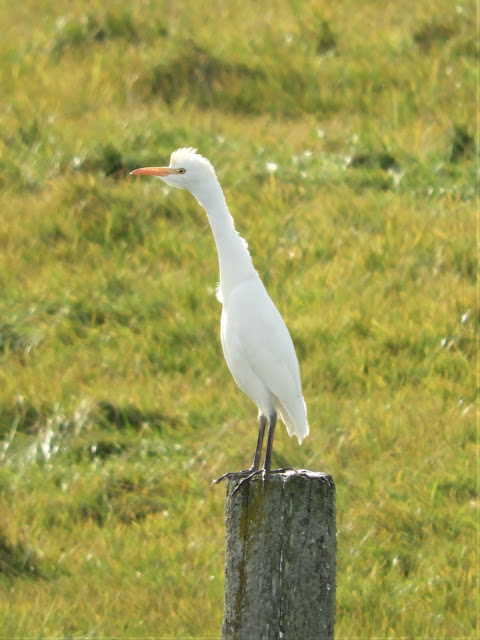 There has long been taxonomic debate about the eastern and western forms of Cattle Egret. See as follows from The Herons cited above.
"The general placement of Cattle Egret has been uncertain, leading to its being assigned to the pond heron genus, Ardeola, and to its own genus, Bubulcus. The uncertainty was due to difficulty unravelling evolutionary relationships disguised by morphological adaptations to terrestrial foraging. The recognition of the two currently recognized subspecies deserves additional study as their distinct ranges and distinctive plumages, and perhaps body proportions suggest they may be separate species." 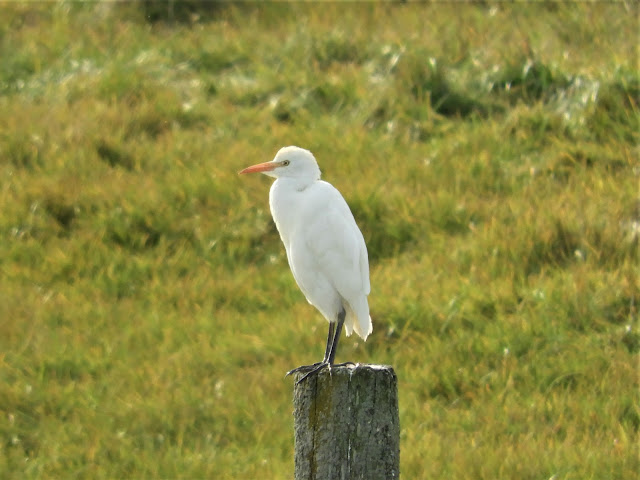 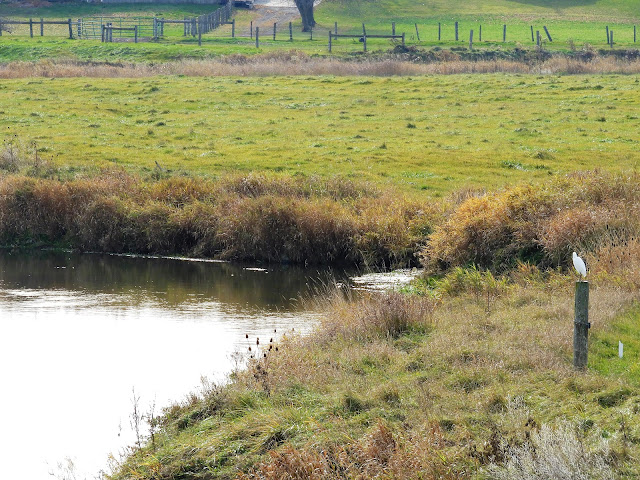 Regardless of the taxonomic niceties and whether you consider this individual a full species or a sub species, it is a splendid visitor to our area, welcomed by bird lovers everywhere, especially those who have never encountered it before. 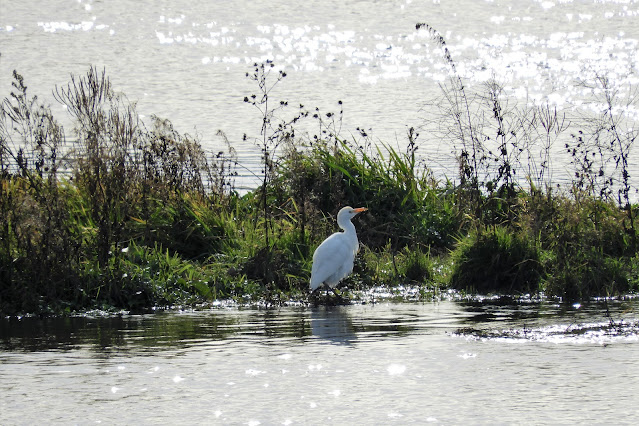 One wonders, given the proclivity of this species to establish new populations, and the continuing warming experienced in southern Ontario, how long it will take before it becomes a regularly breeding species here. Sooner rather than later would be my guess. 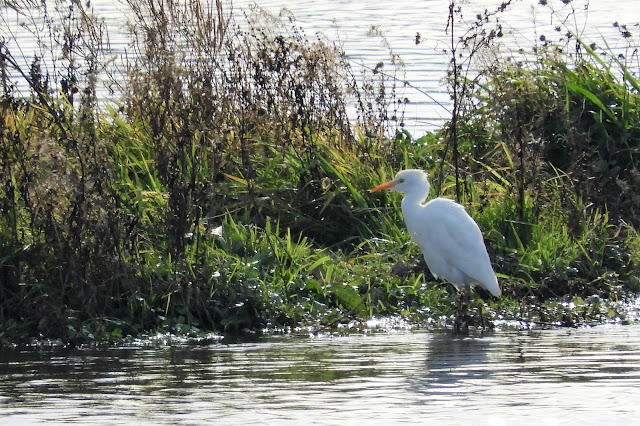 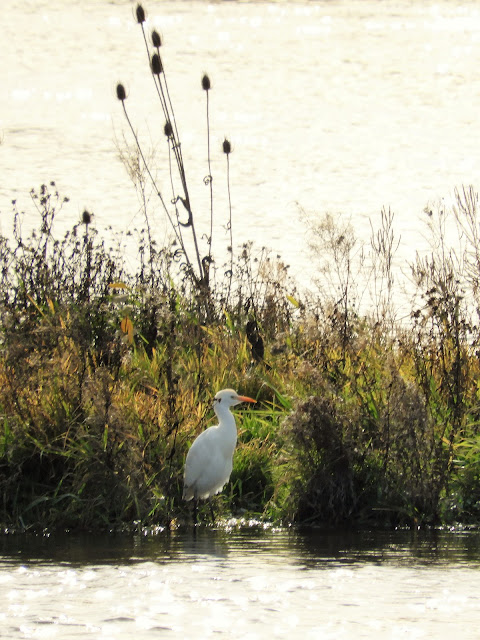 In the meantime, enjoy this visitor from afar! It won't stay much longer.
Posted by David M. Gascoigne, at 10:02