A Pleasant Drive
A few days ago it was grey, misty, raining on and off, hardly the best weather for a walk but great for a drive out to the farming regions of Waterloo Region.
These cattle had perhaps rehearsed their day's activity, for all were lying down, contentedly chewing their cud. 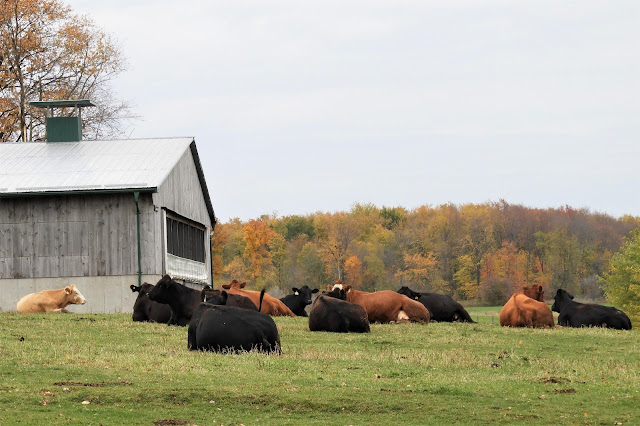 Well, until one contrary individual decided to stand up, that is! 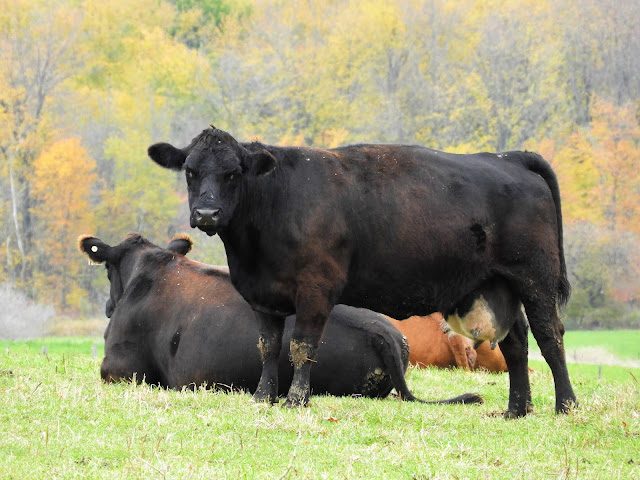 Many trees have now shed their leaves and this denuded individual stood like a sentinel in the field. 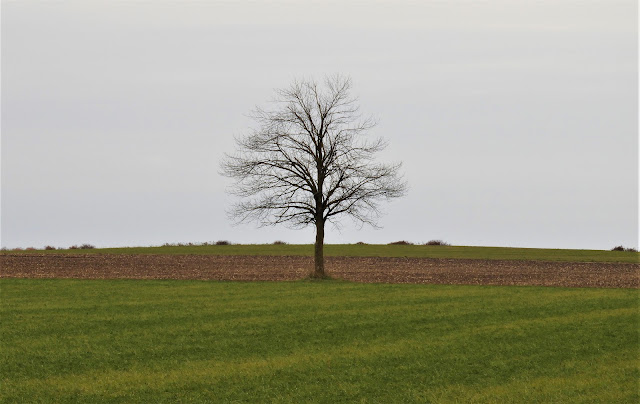 It will not be long before Rough-legged Buzzards (Buteo lagopus) begin to arrive in this area, down from their Arctic nesting ground, and we will be scanning the treetops for sight of this magnificent raptor.
In two locations we saw fairly large flocks of Buff-bellied (aka American) Pipit (Anthus rubescens) but they were constantly in motion, and when they did come to earth from time to time, were immediately lost against the multi-hued substrate. Miriam did well to get this picture. 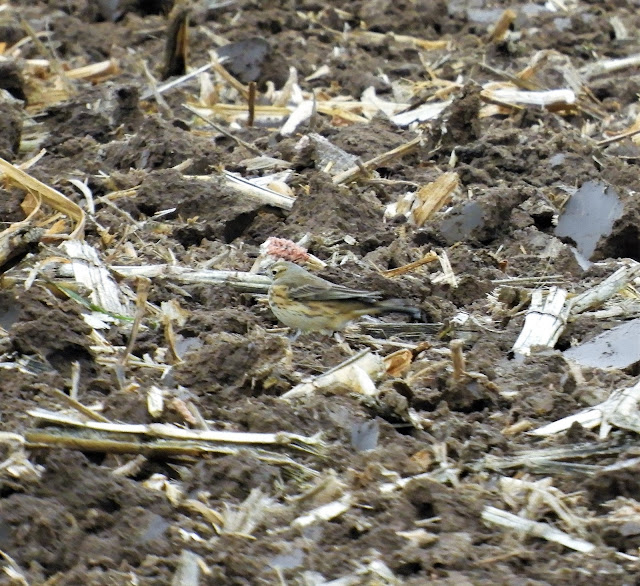 While we were intently watching a group of pipits, we spotted first one, and then two Northern Harriers (Circus hudsonius). They were far off and constantly in motion as they quartered the fields in search of prey. 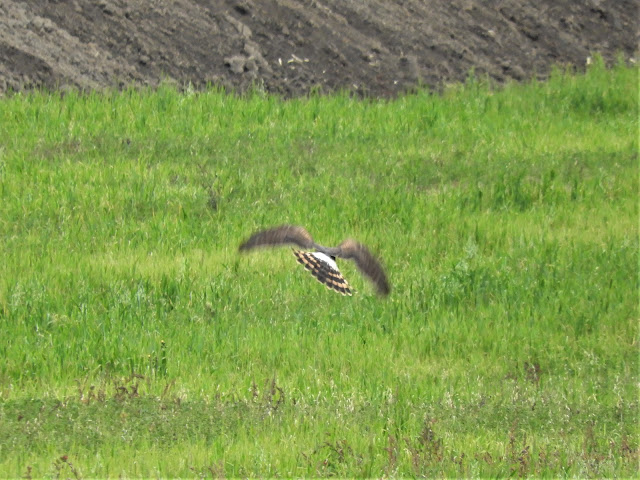 There was no animosity between them, and while they did not appear to actually cooperate in their quest for food, they showed no sign that they resented each other's presence. 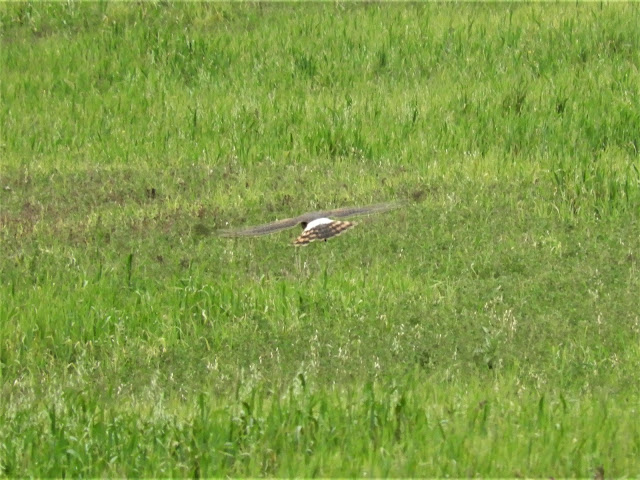 Juvenile Northern Harriers closely resemble adult females, with minor difference, undetectable at the range we were dealing with, but I am wondering whether these two individuals might have been siblings still keeping company with each other prior to migration. Post-breeding Northern Harriers are known to gather in large numbers too, especially after arrival on their wintering grounds, so it is possible that these were two unrelated birds. 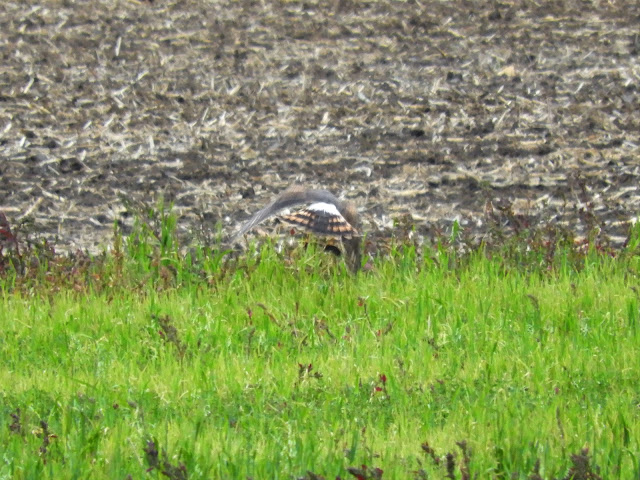 In any event it was a pleasure to sit and watch these two hunters quartering the grass in that slow, rocking flight so characteristic of the species. One of them dropped to the ground and came up with something in its talons, probably a rodent, and flew off with it.
Just before we left the pipits and the harriers to carry on with their lives, the sun came out as though to cap our day, and the beauty of our province in all its autumnal splendour was a wonder to behold. 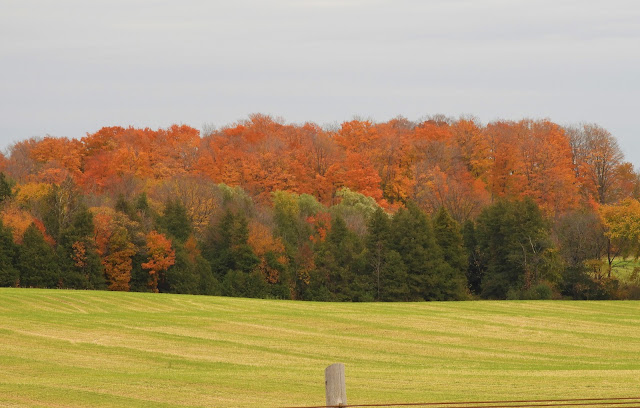 It really is good to live in Ontario.
Hillside Park
Soon you will be as familiar with Hillside Park as I am! 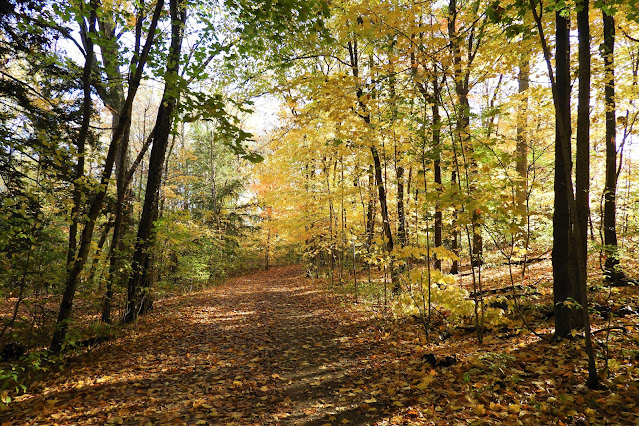 Over time it has delivered many a special bird for us, and is always a pleasant place to walk at any time of the year.
After an entire lifetime of birding, any owl at any time is a momentous sighting, and we were enthralled to see this Barred Owl (Strix varia) peering down at us. 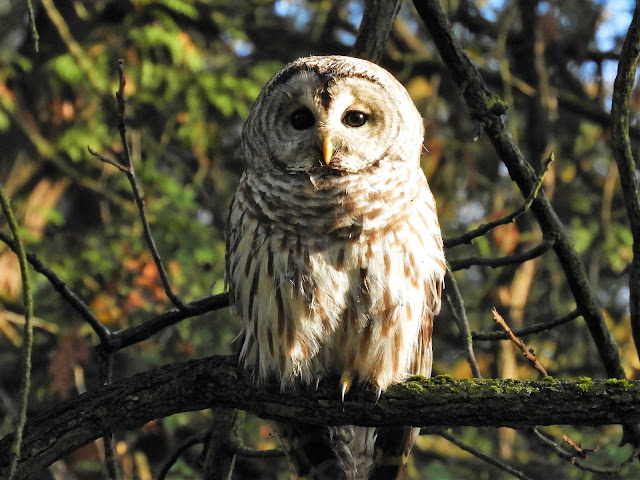 I have seen a good many Barred Owls over the years, but the sense of excitement at the encounter never gets any less intense. 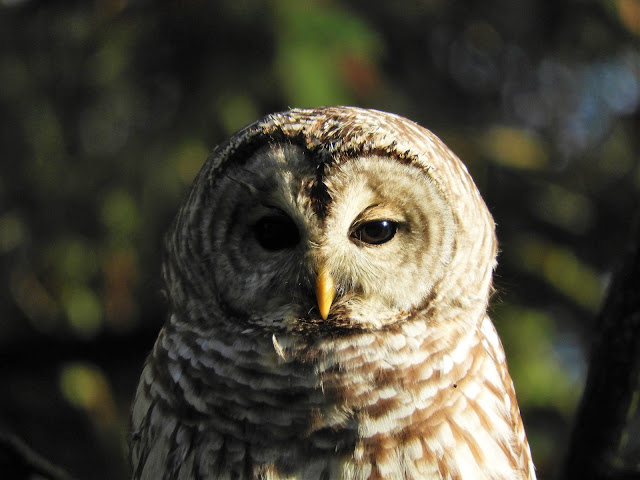 Owls, mysterious creatures of the night,  have been persecuted throughout history by superstitious humans who viewed them as agents of the devil, or as witches, or other forces of malevolence. We have ritually killed them, tortured them, burned them alive, destroyed their habitat, yet they have survived, all the while keeping rodent populations in check. Service to humanity is rendered despite our effrontery towards them. 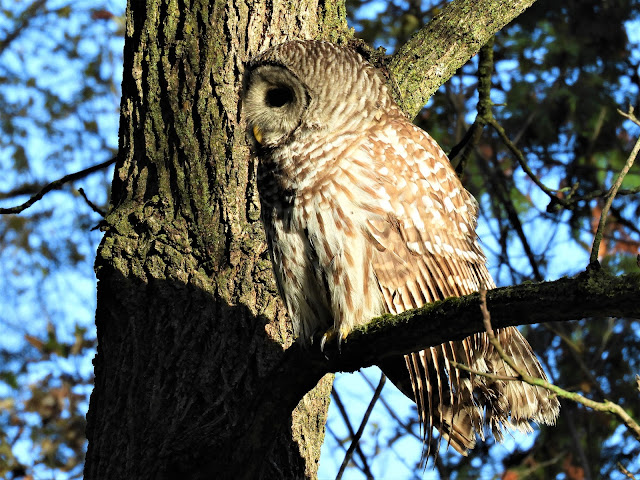 Thank goodness we are at least marginally more enlightened in the 21st Century. Not much mind you, but a little. 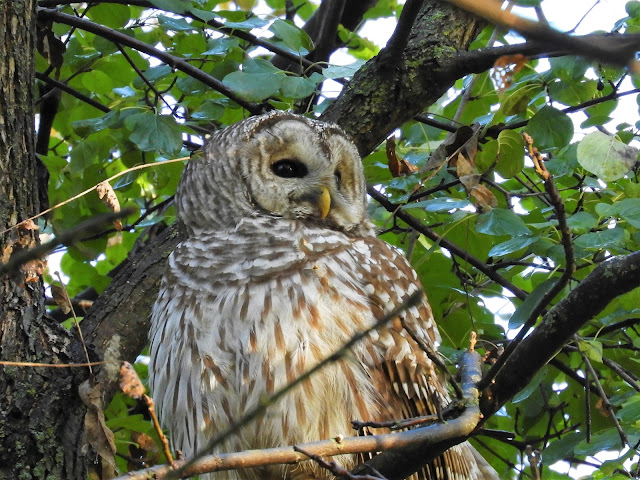 Perhaps this regal female (I am pretty sure based on size it was a female) looked down on us with rightful disdain. 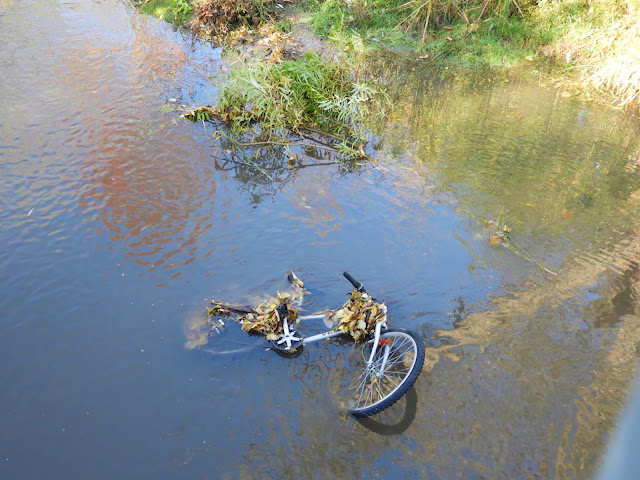 Here we have a bike tossed into Laurel Creek. It seems we cannot resist dumping our trash where it doesn't belong. Let's pollute a few streams, toss away our disposable masks, throw our plastic water bottles into the grass - generally befoul our whole environment, knowing full well what we are doing yet continuing to do it. Of late the charming addition of used condoms seems to have been added to the items we hurl out of the car window in a couple of spots I visit (I resisted the temptation to show you a picture or two).
"Yes," says that wise owl, "Those humans are something else!"
No wonder owls try to keep to themselves. It sure beats hanging around with us.
Posted by David M. Gascoigne, at 14:47