Visit to Long Point, ON

COVID-19 is presenting many challenges to all of us and the degree to which we are affected is predicated somewhat on our lifestyle. If the most important part of your social life is going to movies and getting together with friends at your local restaurant, it is clear that your routine will be negatively impacted in a major way.
For birders it is not (at least not yet) quite so dire.
We are lovers of open spaces, and for us areas little affected by humans are cherished places. It is easy to continue doing what we love best, from our own backyard, on a local trail, or further afield to favourite destinations
The area around Port Rowan/Long Point in Norfolk County, Ontario is the site of one of Canada's oldest bird observatories, and a major hot spot during spring and fall migration. It is significantly positioned for the passage of birds, situated as it is on the north shore of Lake Erie, constituting a magnet for waterfowl, in addition to having substantial forest cover for returning passerines. Long Point proper is in fact a World Biosphere Reserve. 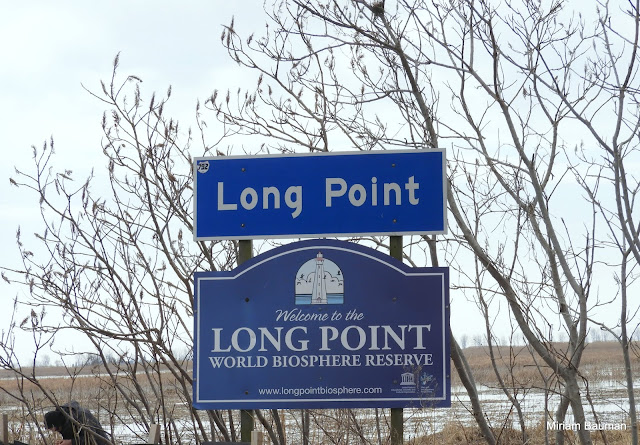 Miriam and I checked the weather forecast on Tuesday, and with a favourable augury for the following day, decided that an outing to Long Point was in the cards for us.
Highway 401, going from Windsor on the international border with Detroit, Michigan to the border of Québec and Ontario, is Canada's busiest highway. Under normal condition there is a steady hum of traffic twenty-four hours a day. We have all been reading of lowered pollution levels around the world during the current crisis, with consequent improved air quality, as fewer vehicles are on the road, and international air traffic is virtually at a halt. Witness Canada's busiest artery during a pandemic. 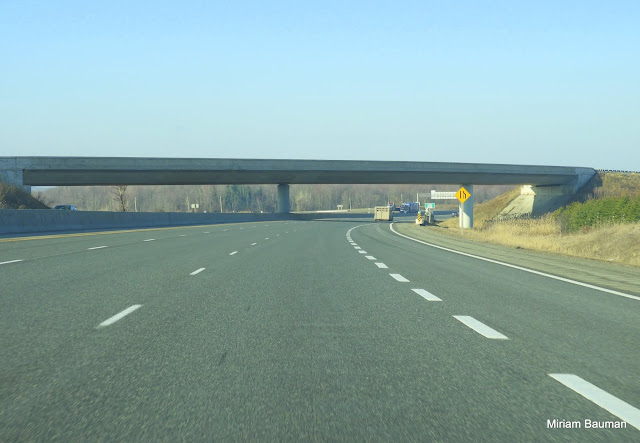 There was barely a car on the road! Most of the traffic we did see comprised trucks delivering vital commodities across the province and beyond.
As is our custom, we first checked the harbour at Port Rowan where the most numerous species by far was Lesser Scaup (Aythya affinis). 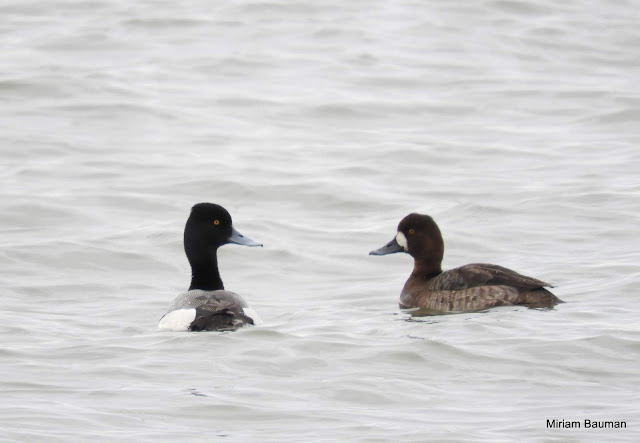 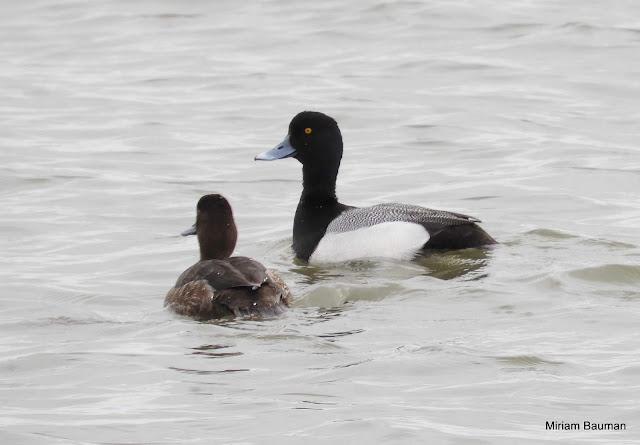 A couple of pairs were very considerate and came in fairly close to shore to give us at least a chance for a few decent pictures.
Ring-billed Gull (Larus delawarensis) was the most common gull, as is to be expected at this time of the year, and this individual struck a nice pose for the camera. 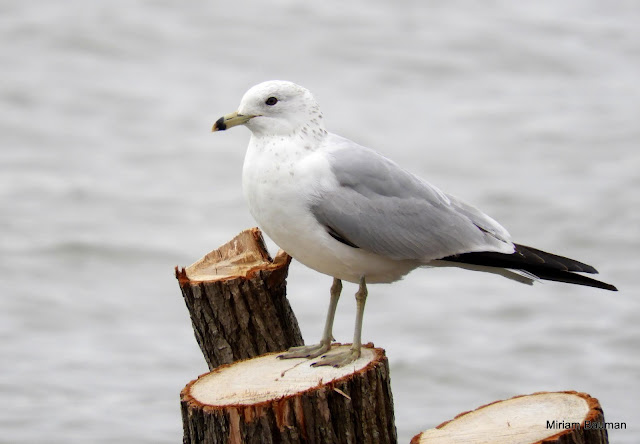 Several smaller Bonaparte's Gulls (Chroicocephalus philadelphia) were also present, some beginning to acquire their nuptial hood, but they darted and flitted like agitated dragonflies and photographs were out of the question.
That most endearing overlord of the marsh, the Red-winged Blackbird (Agelaius phoniceus), was present with males singing in defence of territory, warning off all rivals and preparing for the arrival of females.  As a matter of fact, at our next stop we would see our first female of the season. 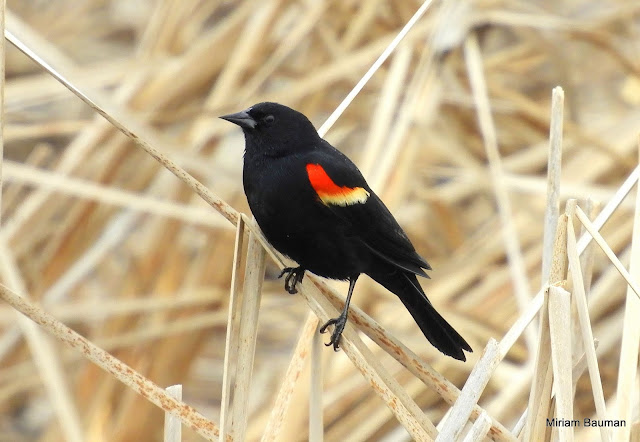 The headquarters of Bird Studies Canada (recently renamed simply Birds Canada) is at Port Rowan and there is a viewing area and several trails, always meriting a stop.

Under normal circumstances it is also provides a welcome washroom opportunity, but under the draconian Coronavirus régime entry to the building was barred and staff were working from home. Miriam was relieved that the icy winds of winter were not blowing!
The pond at Birds Canada contained a very pleasing array of ducks, but there is a considerable barrier of reeds between the viewing platform and the water, and it is difficult to take photographs. It is also a little beyond the desirable range for suitable picture-taking.The Gadwall (Mareca strepera) below is the best we could do. 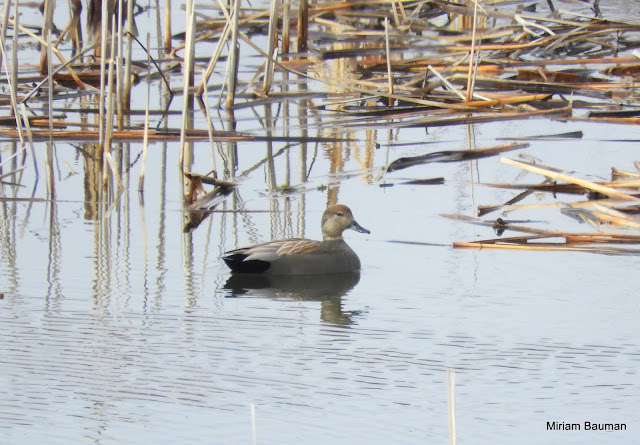 A pair of House Finches (Haemorhous mexicanus) on the rail presented much better opportunities. 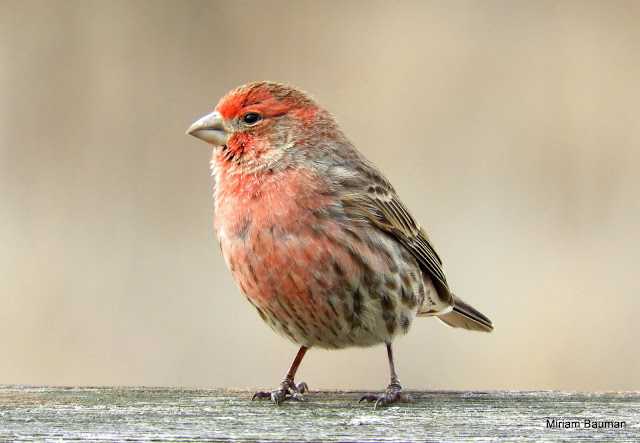 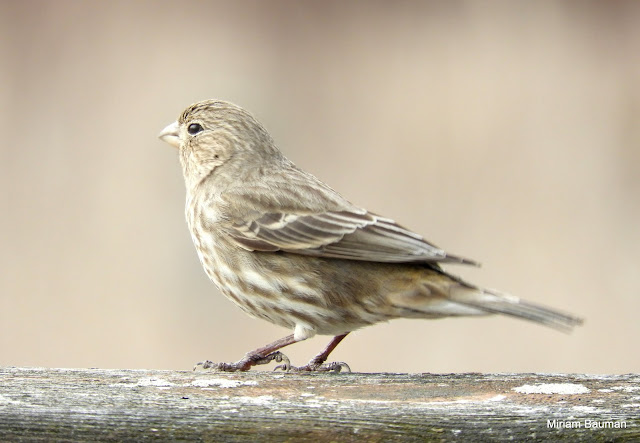 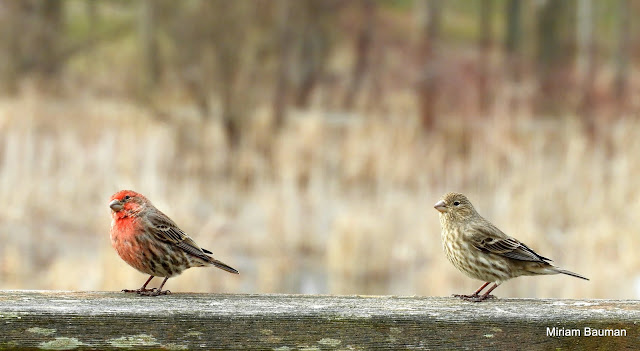 Just before leaving we spotted this pair again, up on the roof, and they were carrying nesting material. Their pair bond is obviously formed for the season.
Song Sparrow (Melospiza melodia) is a hardy species (in fact some individuals stay for the winter) but migrants are among the earliest of species to return, and a male singing from atop a high, visible perch is an iconic feature of spring. 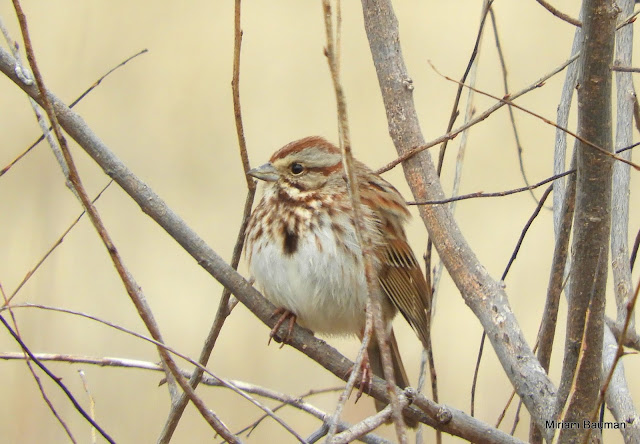 We moved on to Lee Brown Waterfowl Management Area where the concentration of geese and ducks was impressive, including the presence of a Eurasian Wigeon (Mareca penelope). Again conditions were far from ideal for photography without a large lens, and we had to be content with a few images of birds on land, mainly Canada Goose (Branta canadensis) and American Wigeon. 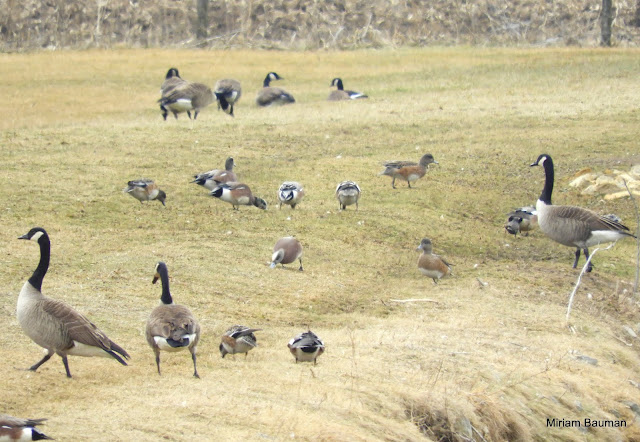 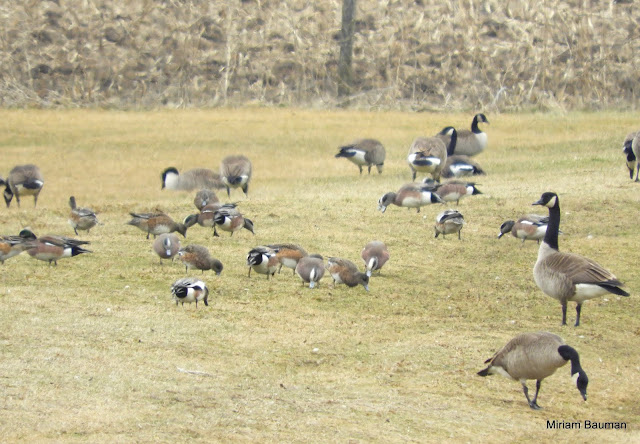 In the picture below you can see that a Northern Pintail (Anas acuta) has come to join the others on the emerging grass. 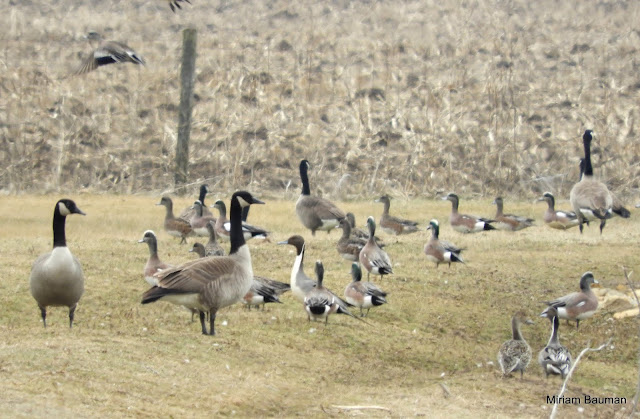 It was time for lunch and we pulled off a little farther down the road. 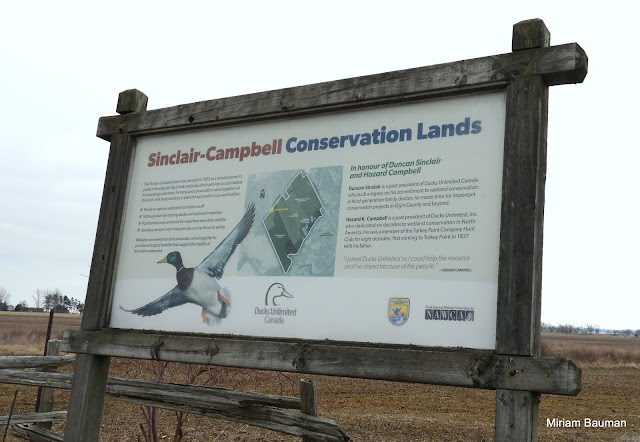 Public access is not permitted to this area but there is a small fenced section where a half dozen or so cars could park. No one joined us today!
We had a clear line of sight on a Bald Eagle (Haliaeetus leucocephalus) nest and through the scope could clearly see a bird sitting on it. The picture is far from satisfactory, but you can see the adult on the nest. 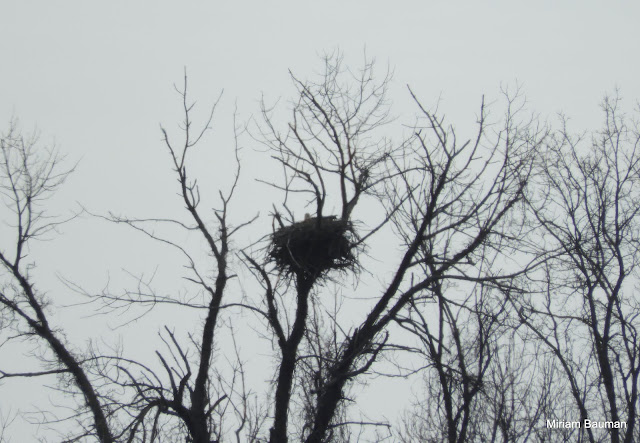 Ironically it was here that one of the best photographic opportunities presented itself when a Horned Lark (Eremophila alpestris) perched close by in the open, but by the time Miriam put down her sandwich and reached for her camera, it was gone!
Driving along the causeway numerous species were in evidence, with Lesser Scaup again predominant. 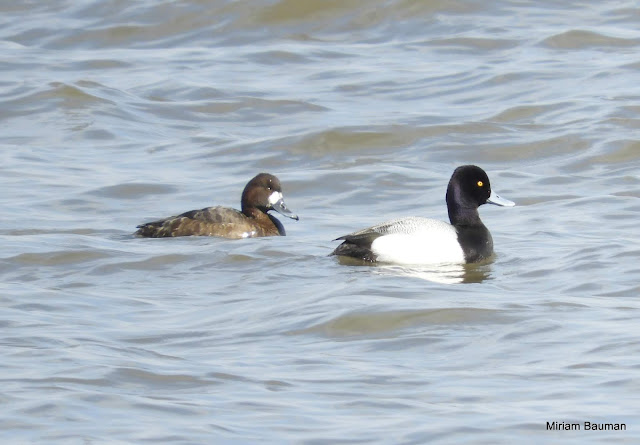 The American Beaver (Castor canadensis) has been justifiably called nature's engineer; it is not intimidated by size! 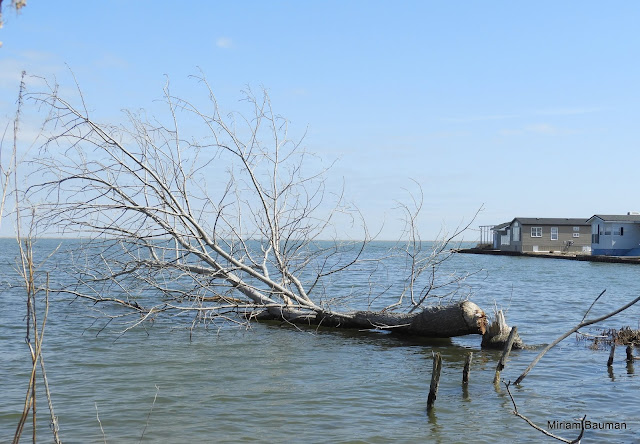 Many Redheads (Aythya americana) dotted the water, disappearing from view as they dove for fresh water mussels and other delicacies. In the image below you can see a female Ruddy Duck (Oxyura jamaicensis) off to the left. 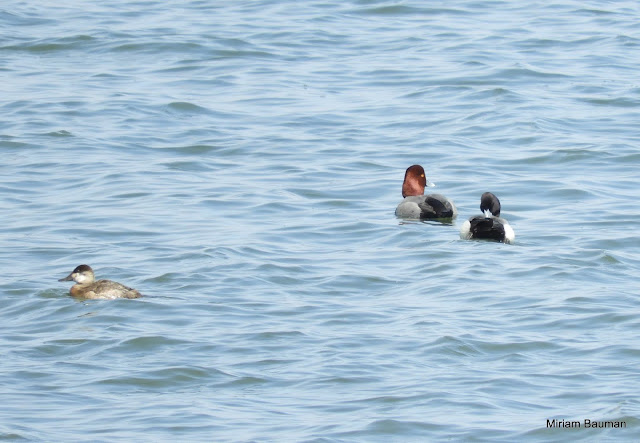 To assign the definition "song" to the doleful call of the Mourning Dove (Zenaida macroura) is perhaps a stretch, but effectively that's what it is. Many seemed to have formed pairs and I have little doubt that early nesting is already underway. 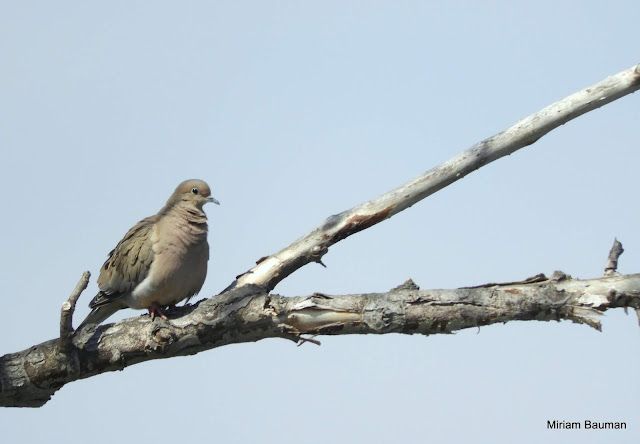 At Old Cut, home to the bird banding station at the Long Point Bird Observatory, careful attention has to be paid to inattentive wildlife. 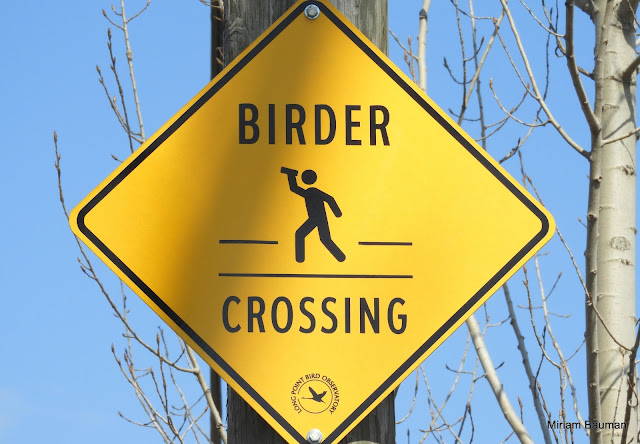 Phragmites (European Common Reed) is an invasive species in Ontario that has been wreaking havoc on native ecosystems for decades. It is unknown how it was  first introduced here, but it has spread exponentially. Phragmites australis is aggressive,  and out-competes native plants for water and nutrients. Toxins from the roots are released into the soil, retarding the growth of and killing native vegetation. It is extremely difficult to eliminate, but at Long Point a very serious attempt is being made to eradicate this alien pest. 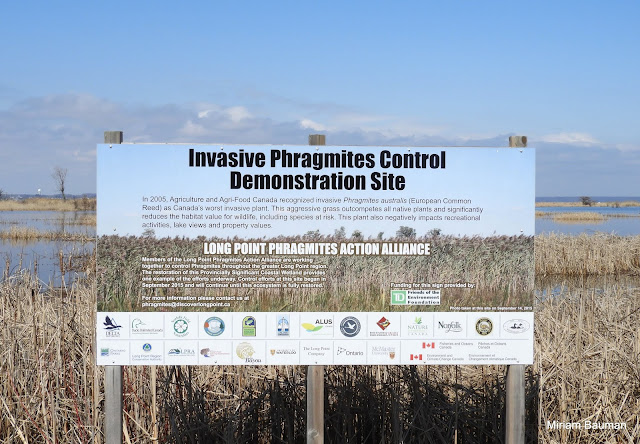 I was pleased to note that the University of Waterloo is one of the agencies involved in the eradication project.
American Coot (Fulica americana) was quite plentiful in a couple of areas. 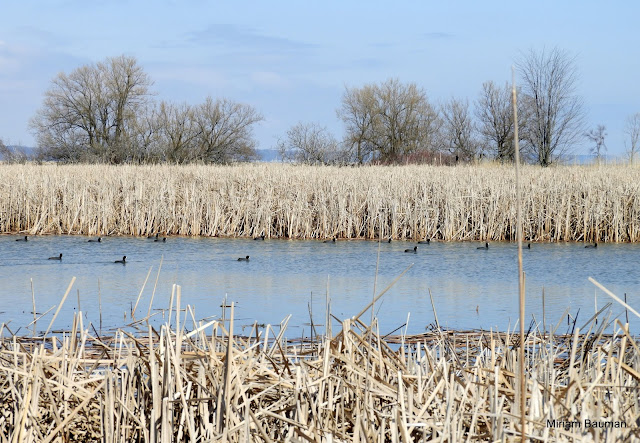 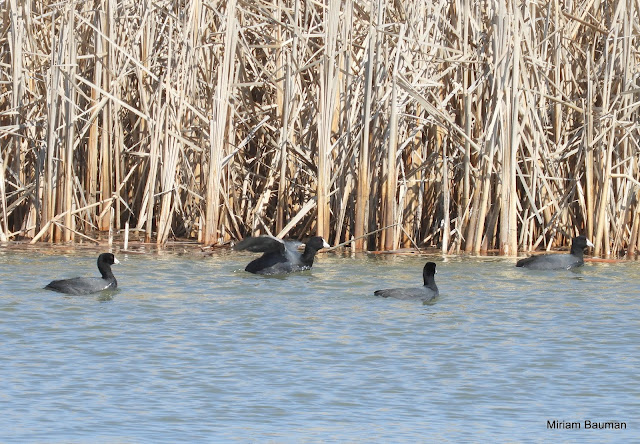 A couple of Bald Eagles were spotted nearby and the presence of the coots was doubtless not unknown to them. The coots had better beware lest one or two of them becomes eagle prey.
Mute Swans (Cygnus olor) were spotted here and there, but this individual was the closest to shore. 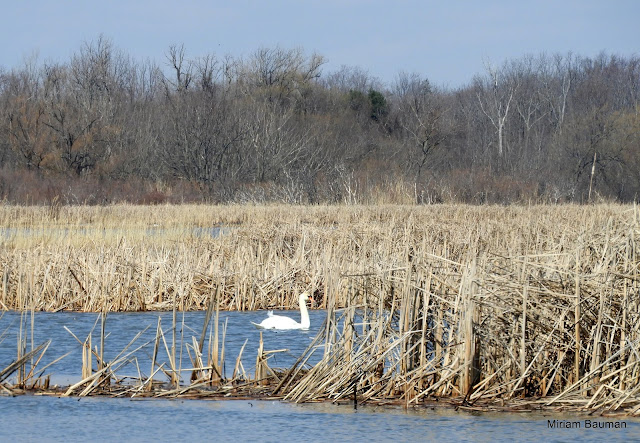 Before leaving we revisited the pond at Birds Canada, approaching it from the rear, but all the ducks there during our morning visit had departed.  We managed a farewell shot of the headquarters, however. 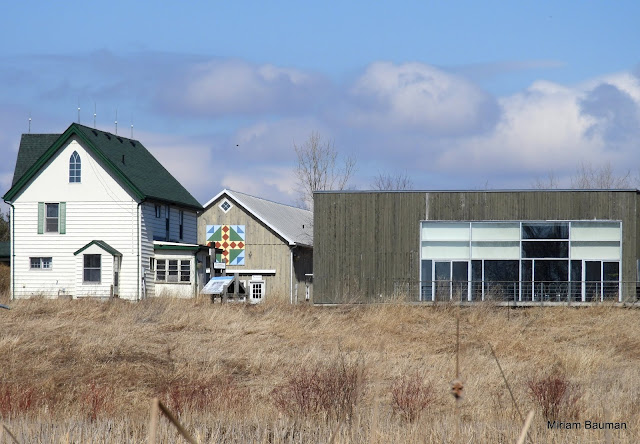 As was the case on the way down, the return journey along Highway 401 was eerily devoid of traffic. 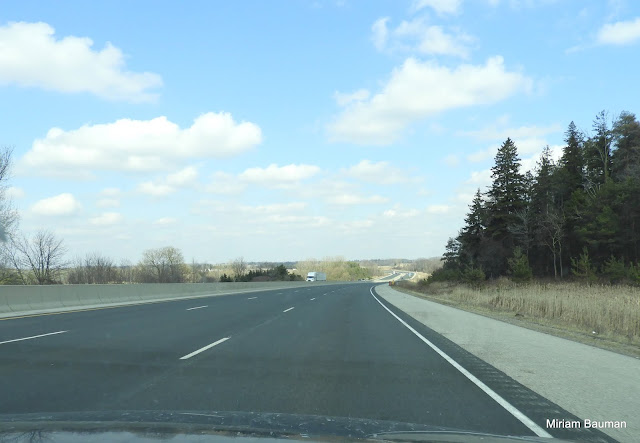 This may be my most enduring memory of COVID-19!