Red-winged Blackbird in the manner of Arthur Cleveland Bent

A while ago I wrote a piece (here) drawing on the very pleasing, whimsical style of Arthur Cleveland Bent, and I thought that I would try it again. It is fun to do!

A male Red-winged Blackbird (Agelaius phoeniceus) is a jaunty, handsome fellow, full of confidence and bravado. 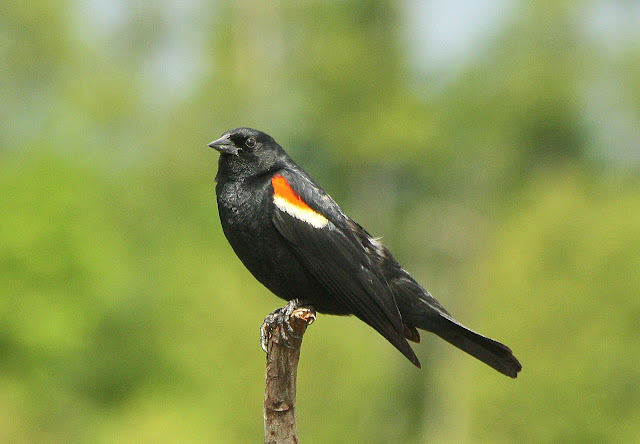 His attire is splendid glossy black, with crimson epaulettes bordered with creamy yellow. A sharply conical bill is diagnostic in this species.
As soon as he arrives back at the marshes in spring he immediately establishes a territory which he vigorously defends against all comers, both physically and vocally, his robust burble-eee song, resonating across the cattails. He is awaiting the arrival of the females, the objects of his ardour, to which he will become consort to several if the fates are kind.
She is beautiful in her own way, with bold stripes and hints of suffused colour like delicate blush applied judiciously. 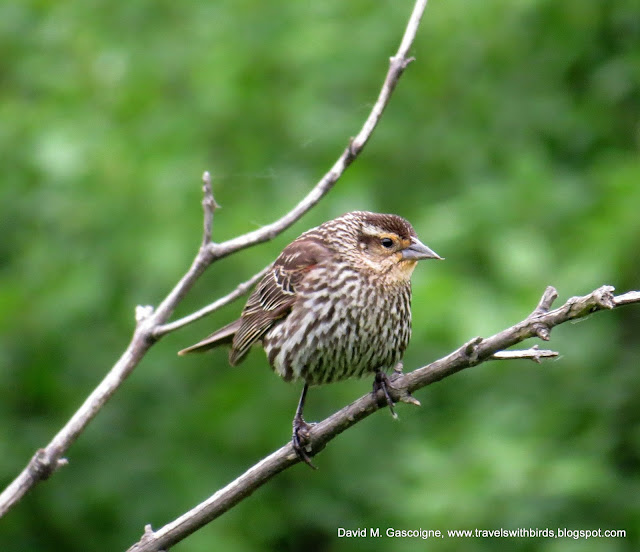 Oh how anxiously he awaits her arrival!
He postures and displays, showing his finery, all the while cajoling with his voice, hoping to incite her to a mating frenzy immediately she lights upon the scene. 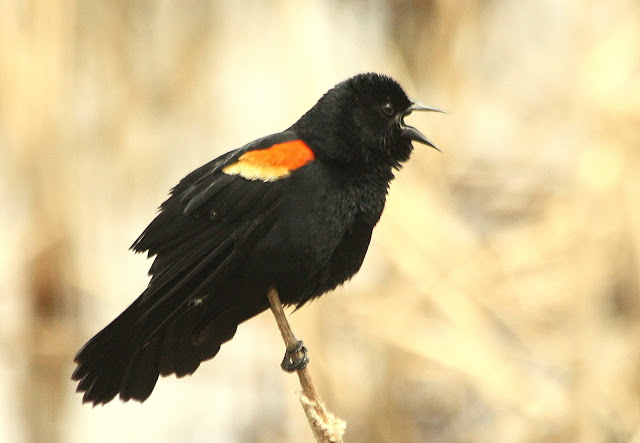 She does not remain immune to these entreaties and succumbs readily to his charms. 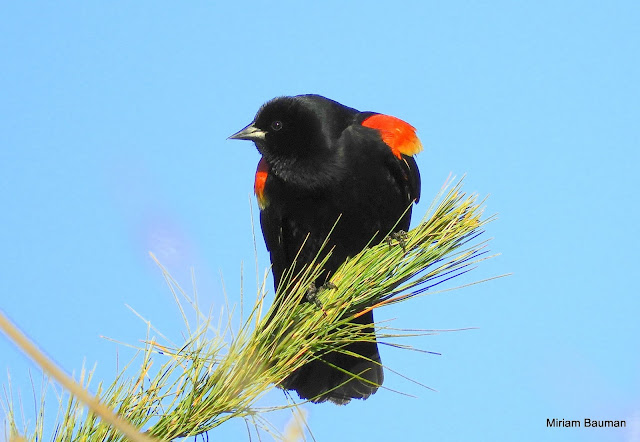 Does she realize, however, that he is a charlatan, a veritable Casanova, bent on seducing others also? 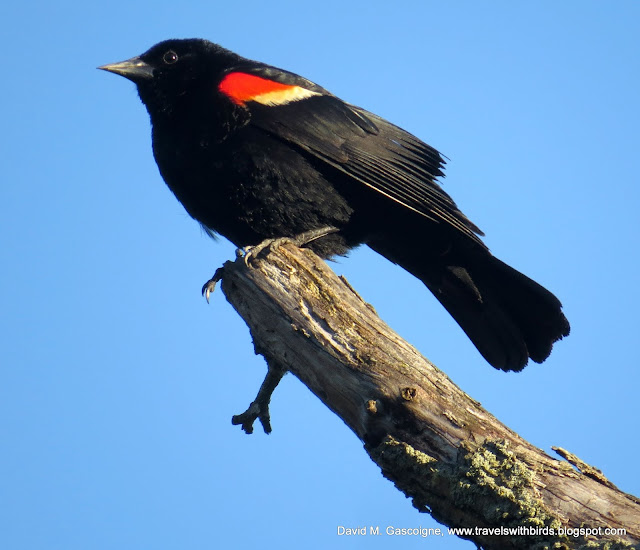 She throws caution to the wind and accepts his tryst, brief though it is, and whether imbued with ecstasy or not we will never know. 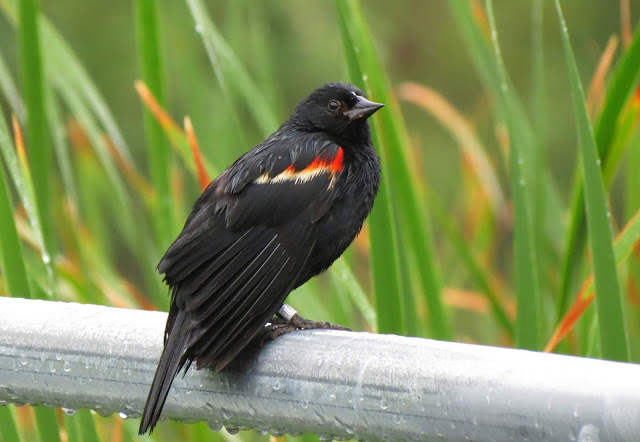 Males who are especially fit may enjoy intimate association with as many as fifteen other females, most of whom will receive no parental assistance from these ostentatious philanderers, and will be left to their own devices to raise their young. Sadly some of them will be incapable of dealing with single parenthood and will be unsuccessful, sometimes abandoning their nestlings. 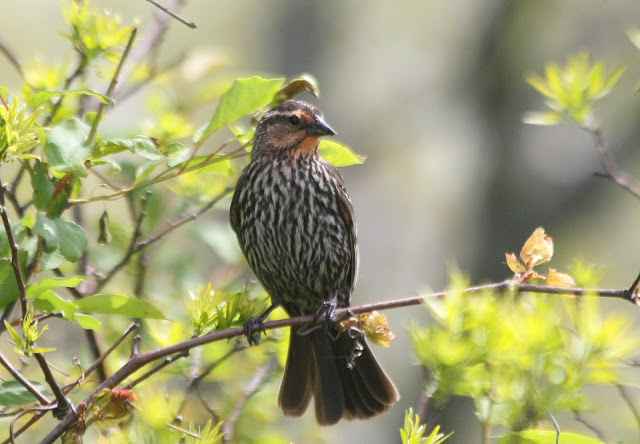 Many females, however, will deem turnabout to be fair play and solicit copulations from other males, especially strong, virile individuals able to furnish superior genes for the next generation.
The world of Red-winged Blackbirds is a steamy affair - not unlike human activity for that matter. Do not be confused by the demure demeanour of the female - whether bird or human! 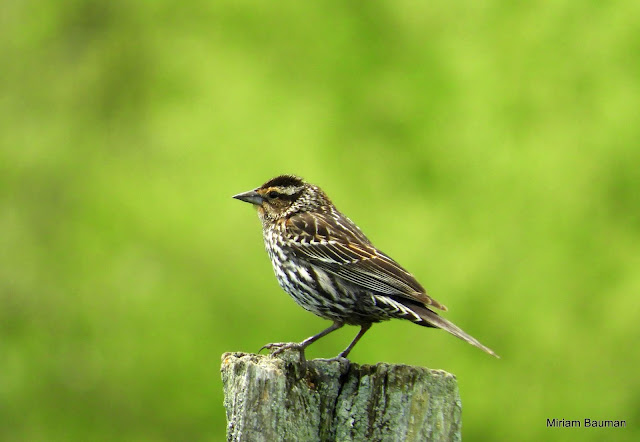 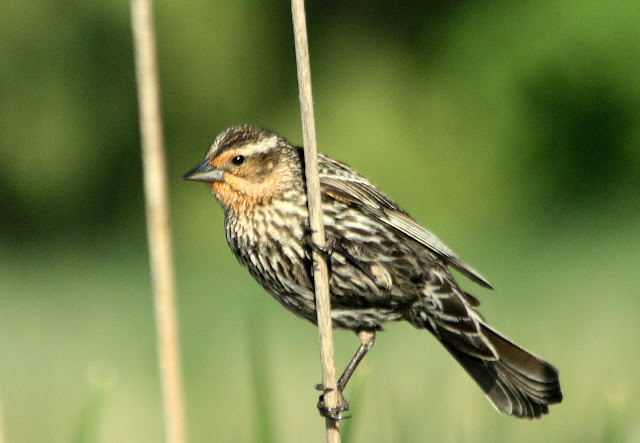 If all goes well the female will construct a nest, woven into cattail stalks, with little or no assistance from the male, especially if she is a subordinate female, and three or four eggs will be laid. 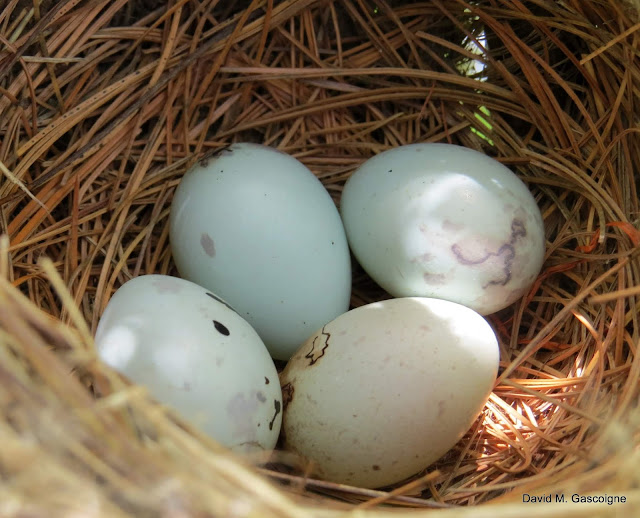 The male, all the while engaged in amorous adventures with other females, will defend the territory of his harem against all comers, not fearing to attack intruders such as crows, hawks, or humans who stray too close.
The female alone incubates the eggs for up to thirteen days following which the young hatch. 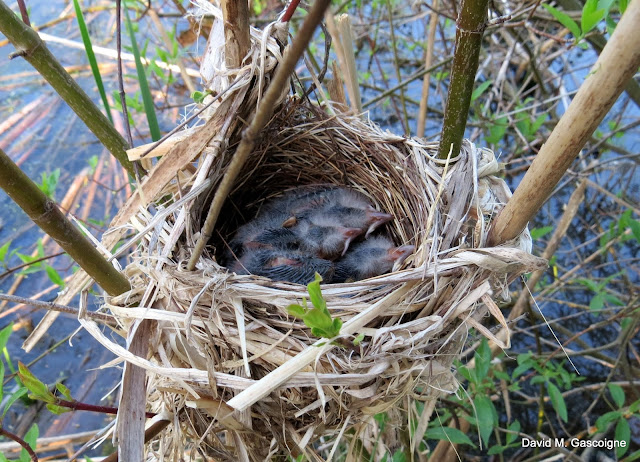 This signals a very busy time for the maternal parent who provisions the young herself and may be constantly observed ferrying food back to the nest. While the food of adult birds consists primarily of seeds, grain and fruit, the young require protein and fat so caterpillars, spiders and arthropods are on the menu. 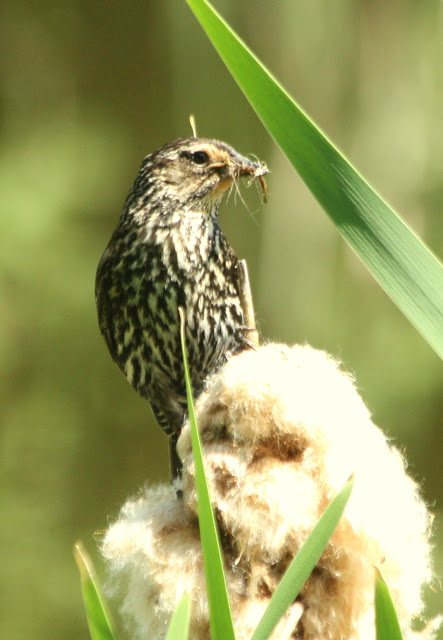 Hungry mouths are clamouring to be fed; are these voracious children never  satiated? 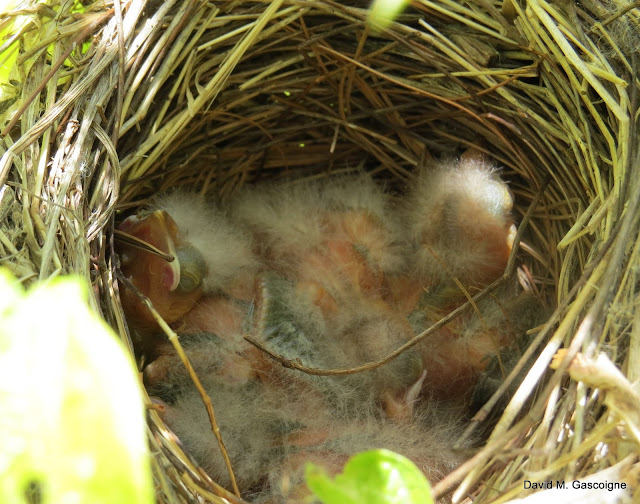 A mother's work is never done! 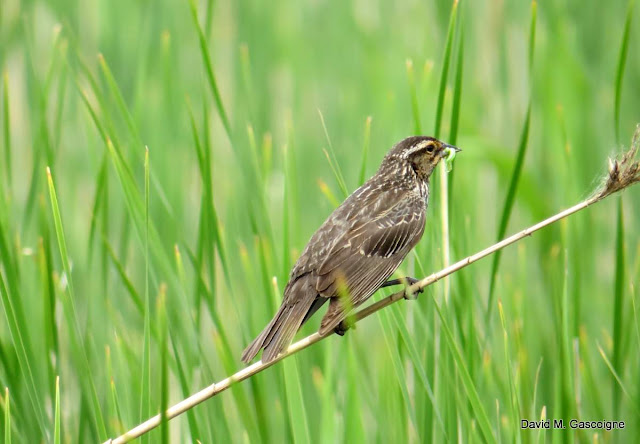 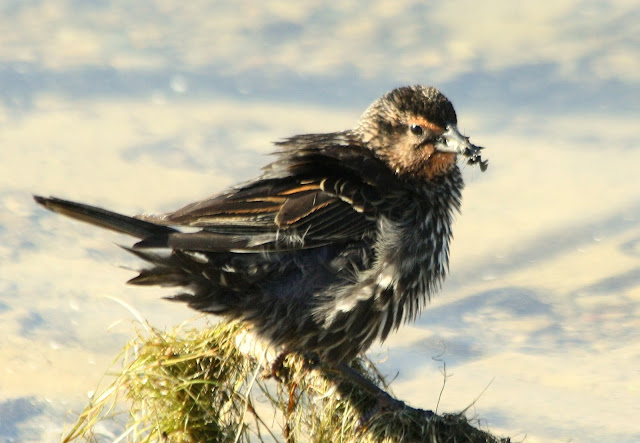 Once the breeding season is over Red-winged Blackbirds join together in flocks, roosting at night in cattail marshes. Then numerous flocks join together, especially on their winter quarters following migration, sometimes numbering in the millions, and often including Common Grackles (Quiscalus quiscula), Brown-headed Cowbirds (Molothrus ater) and Common Starlings (Sturnus vulgaris).
The Red-winged Blackbird has been studied at length, being the most abundant passerine in North America. For many its arrival on its breeding territory marks the true beginning of spring. For me that is certainly so. To hear the first one is to rejoice in being alive. Long may they grace our wetlands.
Posted by David M. Gascoigne, at 11:24