Inscribed in the honour roll of American ornithologists, the name Arthur Cleveland Bent (1866-1954) takes pride of place among many notables. He is widely known for his monumental (and this is an instance where the word is not used lightly) 21-volume Life Histories of North American Birds. To this day, if you examine the bibliography of contemporary ornithological works, reference to Bent is commonplace. His work has stood the test of time.
Bent is not only renowned for his scholarly discipline, but also for the whimsical, almost folksy style in which he wrote. Make no mistake, he did not lack sophistication for he was a Harvard alumnus, but he perhaps aimed his treatise at a lay audience as much as to fellow ornithologists, and the results are delightful. Whenever I refer to Bent (alas I have only  two volumes) I always linger longer than I need to, simply to take pleasure in reading his accounts.
I thought it would be fun to try my hand at this, and so I will attempt to convey the flavour of Bent to you in the following piece on Red-bellied Woodpecker (Melanerpes carolinus). I am under no illusion that I will approach his mastery of this style, but I hope that I will be able to impart to you some of the sheer fun to be had from reading his work.

The Red-bellied Woodpecker no doubt was named by someone suffering from an excess of libation, or possessed of a perverse sense of humour, for the alleged red belly is little more than a smudge on the lower regions, and not frequently seen by the casual observer. 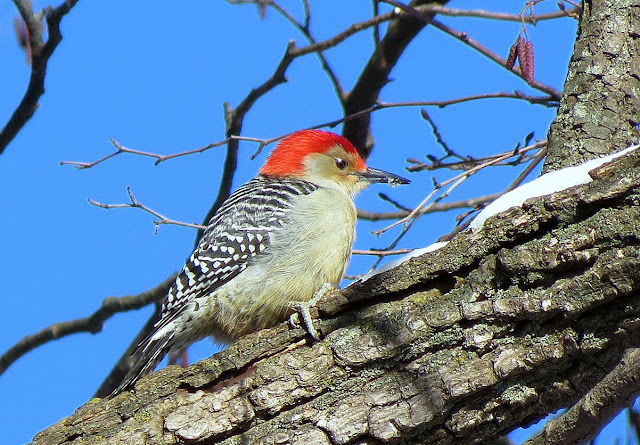 Nevertheless, as you may readily conclude from an examination of the male  above, he is a very handsome chap, with red nape and cap, and a stout bill with which to probe every crevice, every stump, in search of delicacies such as spiders, grubs and arthropods of all kinds that happen to cross his path. 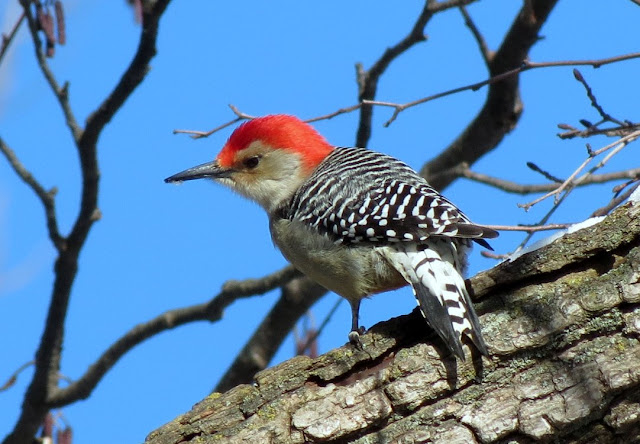 Furthermore he is not above dining on fruit, berries, nuts and the like, and should an opportunity present itself he does not eschew the eggs or young of other birds. Even small mammals and a careless frog do not escape the attention of this catholic diner. 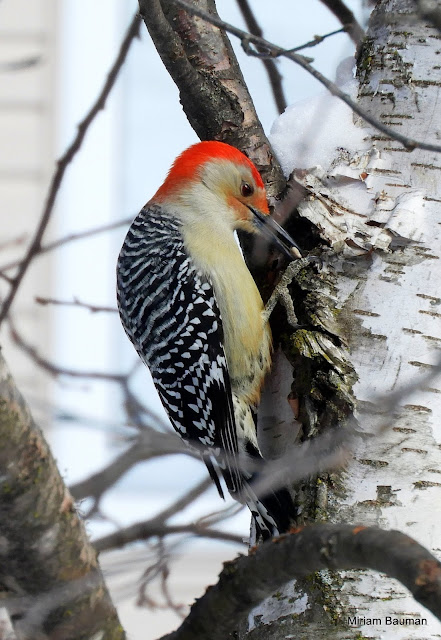 Usually found in his woodland home, he is quick to exploit friendly environs provided by human habitation, where a buffet table of seed and fat is often laid out for him. 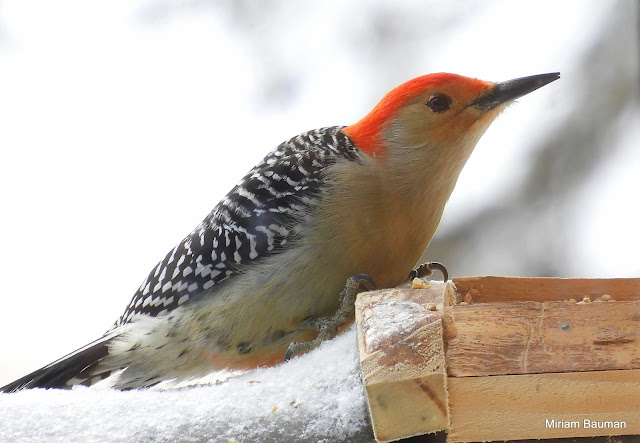 He is not shy to announce his presence by uttering a deep churr call, hoping that the ladies of the area pay attention to this sound. He is declaring jurisdiction over his domain, and also announcing his availability as a suitor. 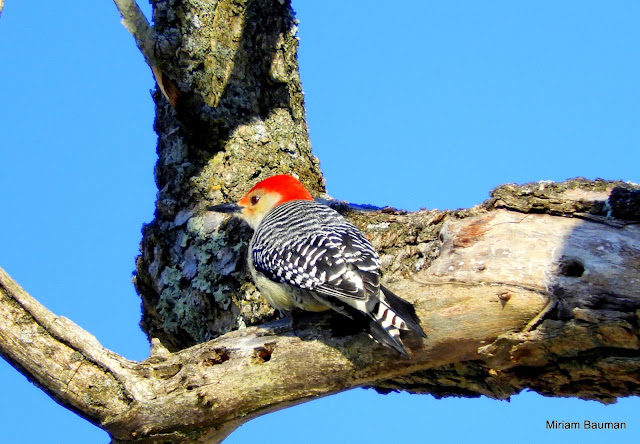 The object of his ardour is similar to the male, but the red does not form a hood, and only her nape is clothed in crimson. 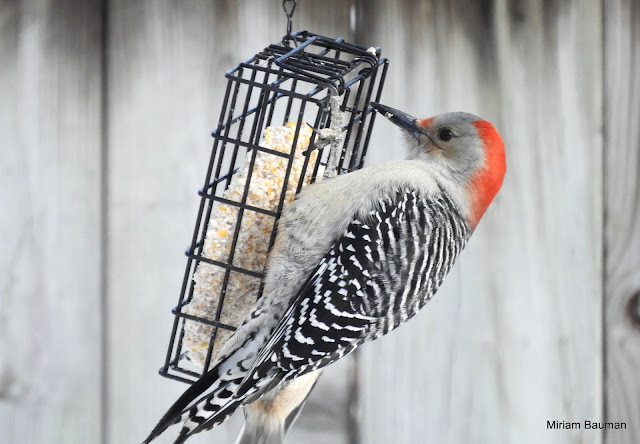 Her head is grey at the top, nor does she support the the orange blush on her cheeks as featured in the male. Confident in her beauty, she perhaps has no need for further ostentation. 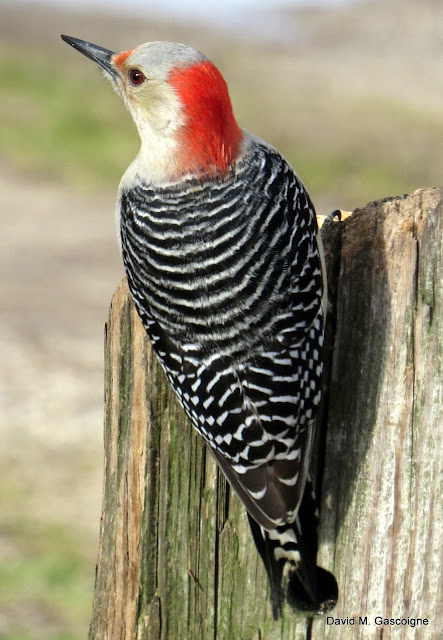 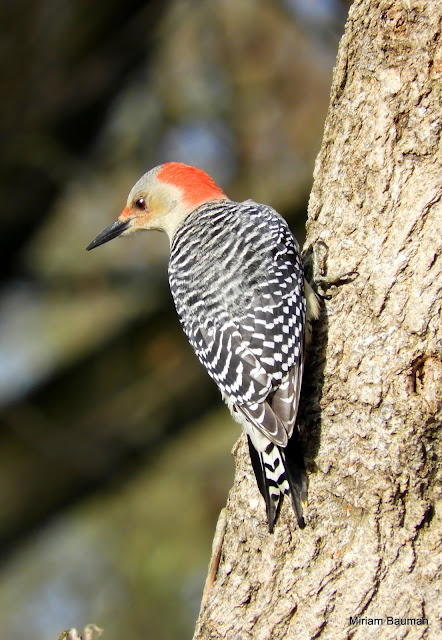 The female is vocal in this species, although not so much as the male, but sweet calls are exchanged between the two sexes to establish a pair bond before nesting. Although calling throughout the year, but especially in late winter and spring, they do not consort together until the requisite hormonal changes incite their instincts, at which time they may be seen together at all times. Once sexually charged in this manner both sexes exchange low-pitched grr sounds, reflecting no doubt their passion for each other. Indeed, the female often initiates copulation by mounting the male, a curious behaviour one might conclude, but it serves to incite the male to perform his duty. 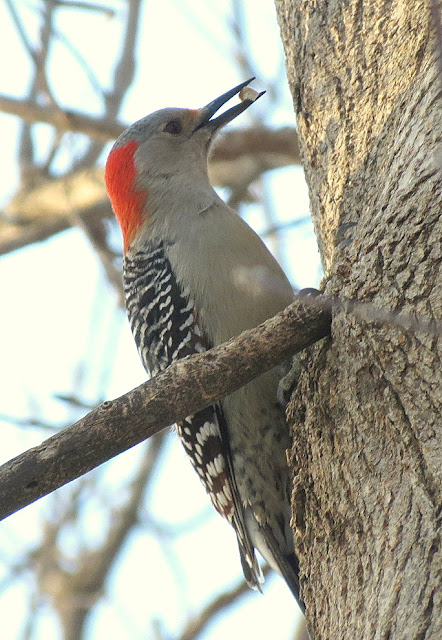 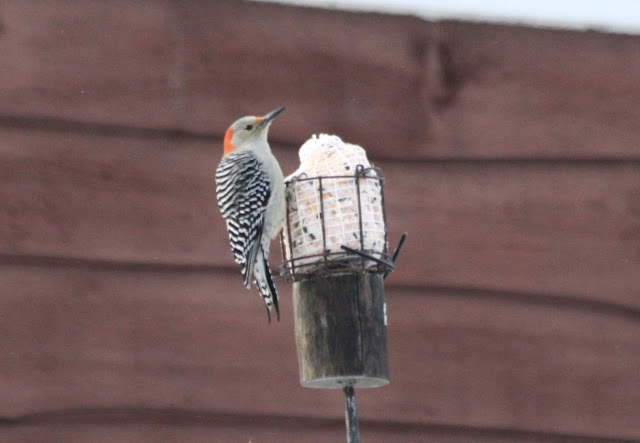 The culmination of their union is a nest hole prepared mostly by the male, but with assistance from the female at the end of the process, where no doubt specific requirements are taken care of; in the way of humans, the female arrogates to herself the choice of final decor and other details of the home.
Four to six eggs are laid and both devoted parents take part in incubation, the male generally assuming the night shift. When the young hatch they are provisioned by both parents who do not lack in industry in ensuring the healthy development of their brood.
Once the young woodpeckers leave the nest the ties of devotion between the two former lovers is severed and they go their separate ways. In the following season they may serendipitously renew their tryst, but more likely they will find a new partner, and begin the whole process anew.

Privacy: Travels with Birds is a personal blog written by David Gascoigne, with an occasional post by Miriam Bauman.
This blog accepts no form of paid advertising.
It reflects honest relationships and no personal information about any of its readers is shared with anyone. Google uses Cookies and by reading this blog you acknowledge this fact and consent to their use.
Upcoming Events
A very brief outline is given below. Please contact me for more details at davidmgascoigne@gmail.com
Obviously people not living in this area need read no further.
Thursday 22 July 2021
Presentation at Idea Exchange, Cambridge, ON
Topic: Urban Birds