This is an important book, both for Canada and the world. John Erik Meyer has a lifetime of experience dedicated to this field of study and we benefit greatly from his expertise. 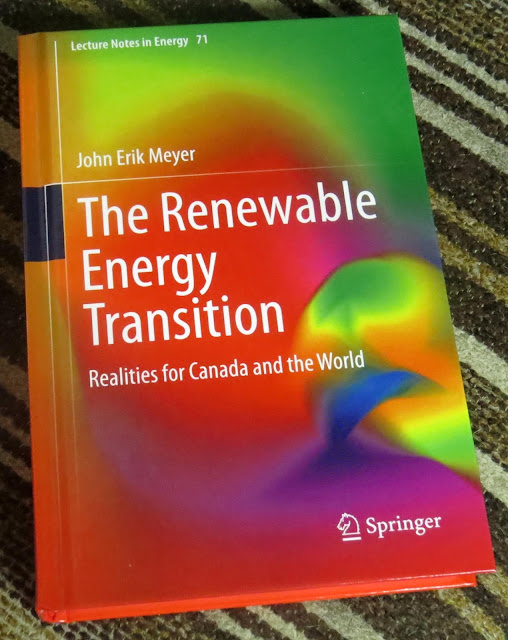 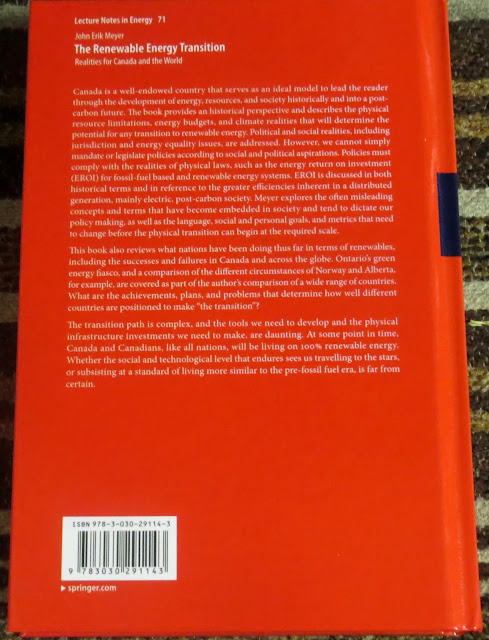 The critical questions are succinctly posed in the preface, viz:

1. How long do we have to change our consumption patterns before the climate is changed irreparably?
2. How long will it be before fossil fuel resources decline in quality to the point of destabilizing energy flows and unsettling financial and production systems?
3. How long for a society to transition away from fossil fuels to the degree that both climate and energy supply threats are greatly reduced?

These questions have enormous relevance for the future of mankind, and are particularly germane in Canada today, where we have the elected governments of resource-rich western provinces, especially Alberta, committed to increased extraction in the tar sands, with a commensurate ongoing destruction of the boreal forest. In the process greenhouse gas emissions will increase exponentially to the point that, were Alberta a separate country, it would be the worst polluter on the planet.
The Federal Government of Justin Trudeau, while touting itself as being a friend of the environment, has nonetheless committed to pipeline construction, having gone so far as to purchase (with taxpayers' money) the Kinder-Morgan Trans Mountain Pipeline to transport crude and refined oil from Alberta to the ports of British Columbia, when the company simply gave up on the venture. There is fierce opposition to the pipeline from all manner of groups with indigenous people and environmentalists being on the front lines of resistance. Trudeau's liberal government, which was unable to elect a single member of parliament from the west in the recent election, now has to seek ways to assure the west that it is an important part of the federation, and no issue is dearer to the hearts of western politicians than pipelines. Furthermore, Québec is equally adamant that it will not permit pipelines on its territory.
And all of this in pursuit of a technology that is already at the edges of obsolescence. But even as reliance on fossil fuels continues to decline, marginally at best it must be said, the danger to the very life support systems of the planet increase. The tipping point is not far off. Many credible scientists postulate that if significant modification of our appetite for, and use of, fossil fuels is not moderated to a substantial degree - immediately - we will have lost the battle by 2030.
Meyer's book begins with the history of Canada since the first European settlers arrived on our shores, who instantly began the exploitation of its resources, including substantial quantities of wood for heat in a hostile winter, thereby releasing stored carbon into the atmosphere. From that modest beginning, with a renewable resource (lumber), we have progressed in less than 500 years, (a mere nanosecond in the existence of the planet), to the point where the very health of the earth is threatened by the modification of its atmosphere, with industrialized societies around the world sharing the blame. And all brought on by the exploitation of non-renewable, dirty, health-jeopardizing, climate-modifying fossil fuels.
Meyer takes us on a step by step journey through the past to the present, with a prescient look into the future, and examines the consequences in a factual, reasoned, scientific fashion, free of the hyperbole on both sides often associated with climate change, of what will inevitably occur if we fail to act - and act soon.
It is perhaps instructive to look at the chapter titles.

1. Stored Energy Builds a Northern Nation
2. Canada's Energy History
3. Energy Budgets for People and Nations
4. Abundance Abounds, Why Change?
5. Renewable Energy Learning Curve
6. Renewal Energy in a Spectrum of Countires
7. Choosing the Right Metric for the Job
8. Public Policy Formation for Successful Change
9. The Transition from the Ground Up
10. Building a Renewable Energy Network - Canadian and Northern Options
11. A New World for Public Policy
12. Steps Towards the Other Side of the Transition

One very significant point that the book makes concerns the reliance on GDP as the measure of the wealth, and hence the success, of a society, with its implication for eternal growth at whatever cost, as an inviolable principle, self-evident in its rectitude. In fact GDP reflects only the financial side of society, and imperfectly at that, with no regard for the laws of physics and the factors which will ultimately determine whether society writ large even continues to exist. The concept of EROI (Energy Return on Investment) is critical in both historical terms and as a matrix for the future in ensuring the ongoing health of a society and its citizens. To understand and accept EROI is probably the most important contribution the book makes to our grasp of the forces which will shape our future, and the extent to which renewable clean energy is critical to our survival as a species. The switch to clean energy is not a choice, it is an imperative. As Meyer points out, even if the whole world puts off fossil fuel reduction, all it gains is thirty years of business as usual, and then we will have to deal with a vastly worse climate scenario.
The text is greatly enhanced by a series of charts, graphs, figures and illustrations. 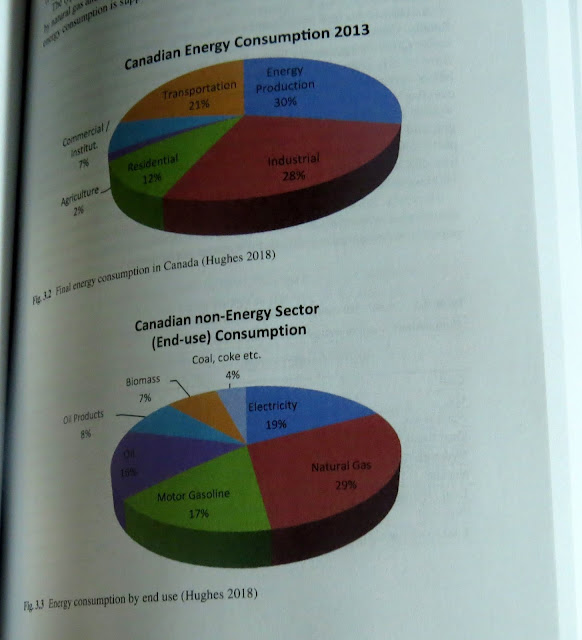 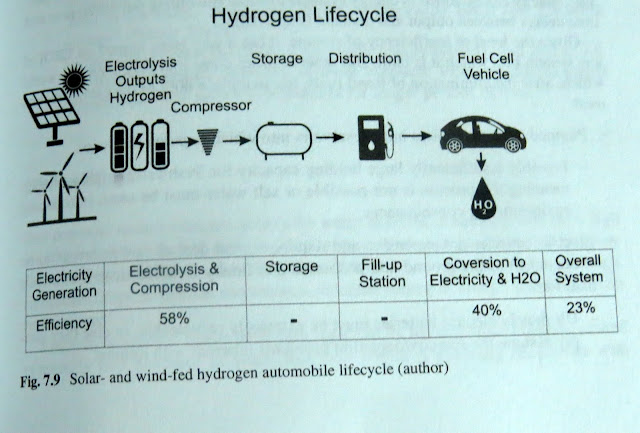 These devices materially assist in translating complex topics and large numbers into visual aids that enhance our understanding of them, facilitating a quick grasp of the subjects covered. 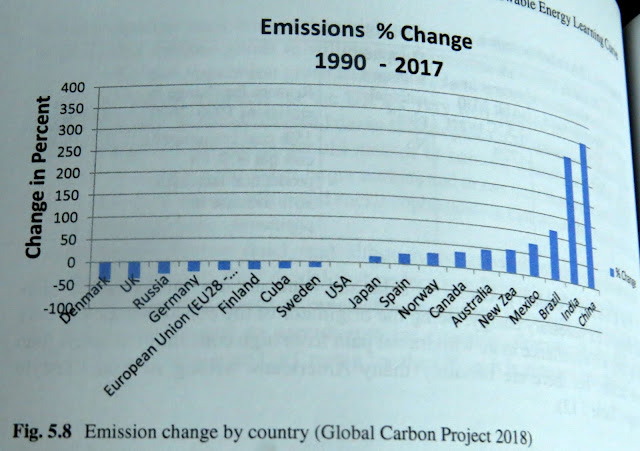 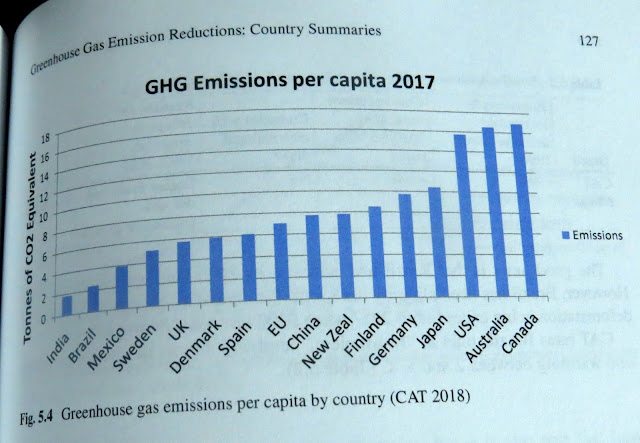 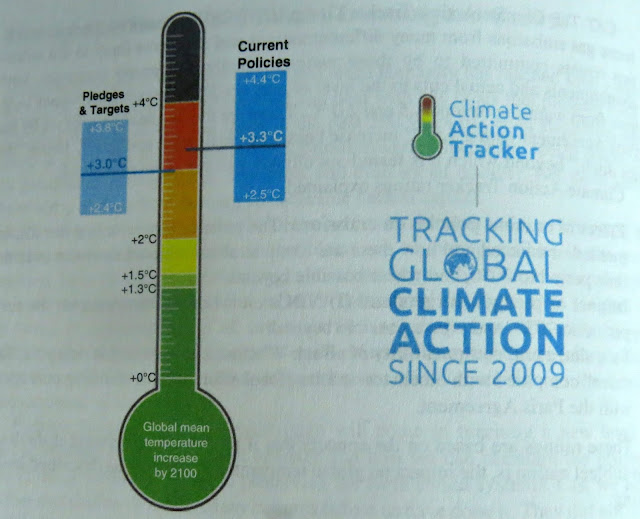 I repeat that the book, page by page, deals with issues in a factual, scientific, evidence-based way. No position is taken without solid back-up, and a supporting bibliography. Meyer has done a great service to all Canadians, to all mankind in fact, in presenting in a highly readable format, the facts before our eyes which we have all too often looked at through clouded spectacles. Indeed some have worn blinders the whole time and remain reluctant to let the light in.
The time for indifference and complacency has passed. The call to action is clear. As the title of Primo Levi's magnificent work says, "If not now - when?"
If I have one niggardly complaint about the book, it is that it seems to suffer from less than rigorous editing. There are far too many typos, a few missing words and the like, "us"  sometimes becomes "use," and there are even outright incorrect statements - for example, Jeff Bezos, celebrated as the founder of Amazon and the world's richest man, is correctly referred to on page 327, but has morphed into George Bezos by page 349.
None of this detracts from the importance of the book. It should be essential reading for everyone concerned about the future of our planet and the future of our children and grandchildren. In fact if you are sixty years of age or younger, it directly concerns you, for you will be living with the changes that have to occur. This text will be my constant companion as I seek to understand the issues of climate change and our ability to deal them on a daily basis.
I salute John Erik Meyer for a compelling read, a vision for the future, a clear understanding of how we have got to where we are, and a prescription for what we need to do to remediate the damage we have done.