Some Days You Get Lucky

Recently, our group of eight has been intact as we go on our outings, adding to the pleasure of the day. Today was such a day; Mary and Judy rode with Miriam and me, Franc and Carol picked up Jim and Francine at their house.
November, in its infancy, presented us with cold weather and snow. We all groaned and complained about an early start to winter, but of late inclemency has morphed into benign and pleasant conditions, and we looked forward to a day of sunshine and a temperature climbing to 10° C. And we were not disappointed! Furthermore, a day at Long Point is always made all the more enjoyable by the fact that we are permitted to use Carol's sister, Betty's house to have our lunch, including fresh coffee which Carol always makes for us. It is never less than very agreeable, but on a cold day it verges on heavenly.
Just to the north of Port Rowan we glanced off to the side and saw hundreds upon hundreds of Sandhill Cranes (Antigone canadensis) in a ploughed field. This is one of the signature attractions of the Long Point area in the fall and the spectacle we were to witness would exceed all our expectations. 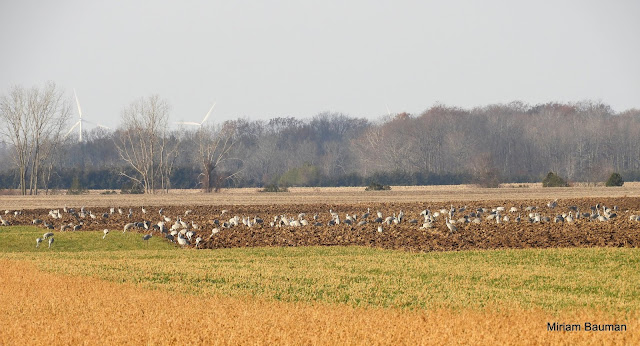 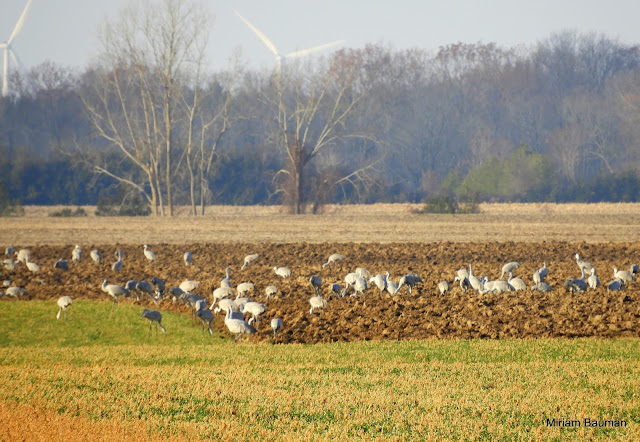 Everywhere we looked there were cranes, adults and juveniles, birds landing, birds on the ground, spectres high in the sky and others coming in to land in that magical fashion of cranes of every species throughout the world.  Never had we seen so many in Ontario. 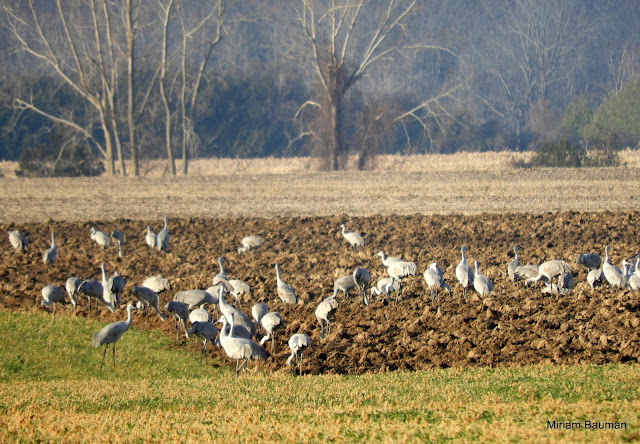 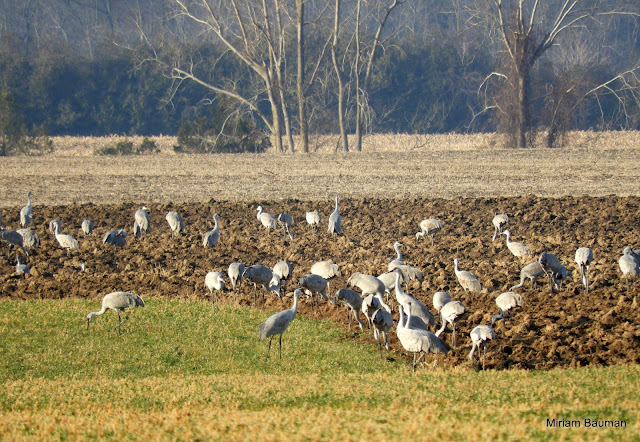 In the evocative words from Paul Johnsgard's little book Those of the Grey Wind: The Sandhill Cranes - "The long, wavering grey line of cranes was like a giant aerial armada, weaving and advancing in wave after wave of birds stretching as far as the eye could see - and beyond."
And so it was for eight awestruck observers, humbled by the grandeur of it all.
The voice of these magnificent birds evokes wonder, joy, contentment, tranquility and a link to the primeval and vital quality of nature. It is at once a burble, a booming, a bugling, a glorious chorus in celebration of life, a choir of the great outdoors, a symphony borne on the wind, a trumpet of joy to sooth the most troubled breast. 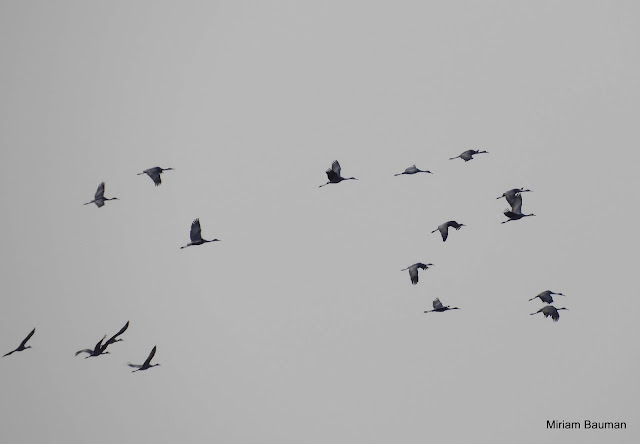 The cranes were not the only spectacle, however. Fall on the north shore of
Lake Erie is equally renowned for the arrival of Tundra Swans (Cygnus columbianus) fresh from their breeding grounds above the Arctic Circle. The skies were filled with swans. Swans vied with cranes to capture our attention. The chorus of the cranes was reinforced by the melody of the swans. We were delighted to see so many young birds, clear evidence of a successful breeding season. 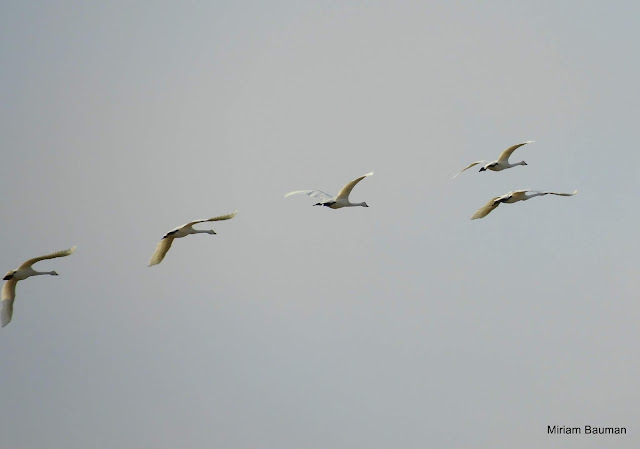 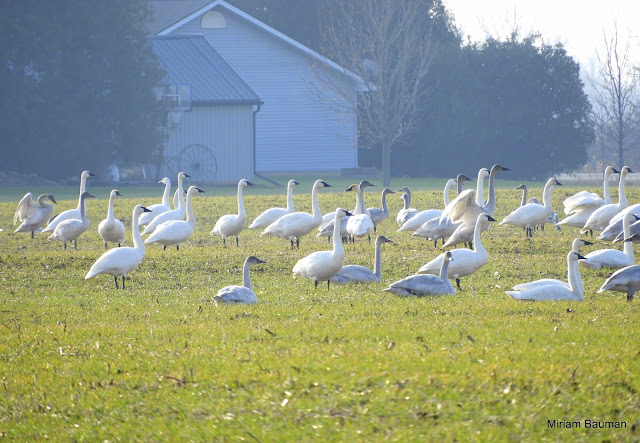 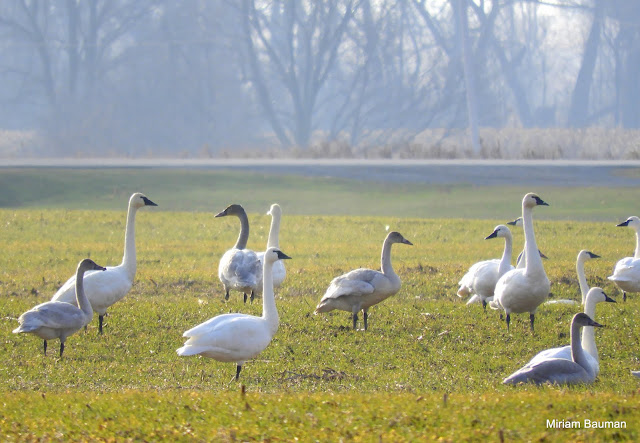 Upon landing the swans lined up in regimental fashion, all facing the same way, as though on a parade ground with a sergeant-major putting them through a drill.

Swan or crane? Where did one look first? 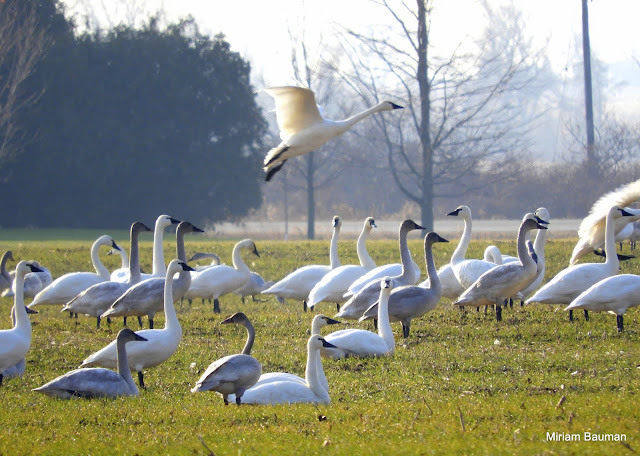 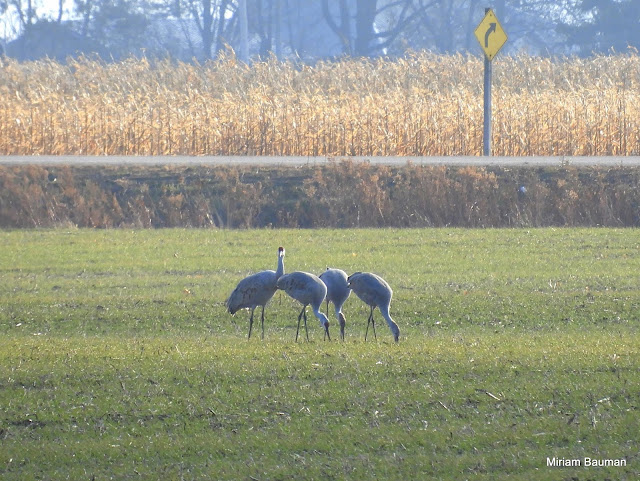 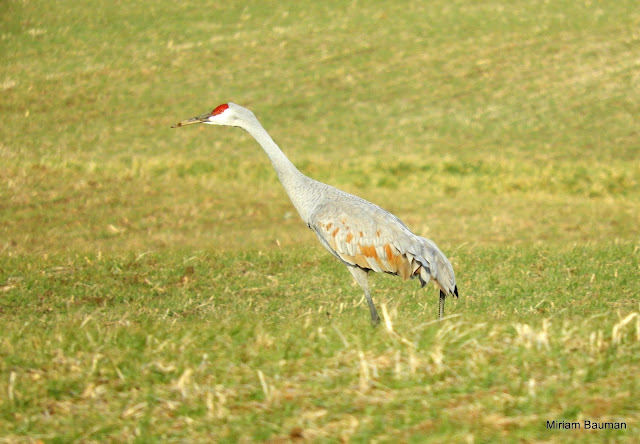 As we meandered along slowly, stopping all the while to feast anew on the spectacle, we saw more and more birds of both species, but the Sandhill Cranes had the edge in numbers. It was truly a remarkable show. 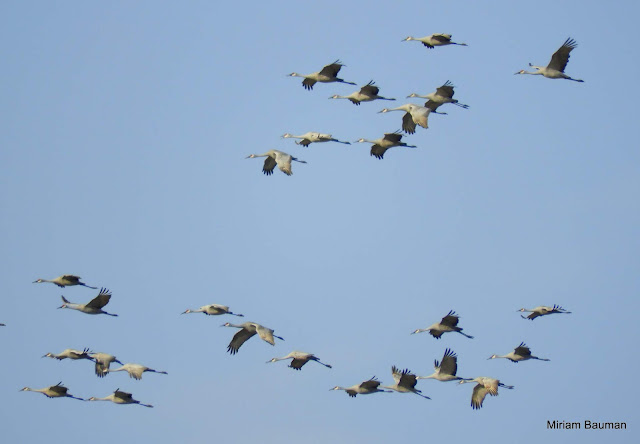 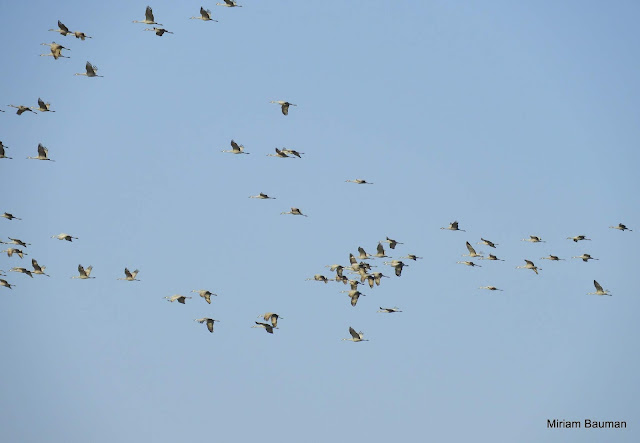 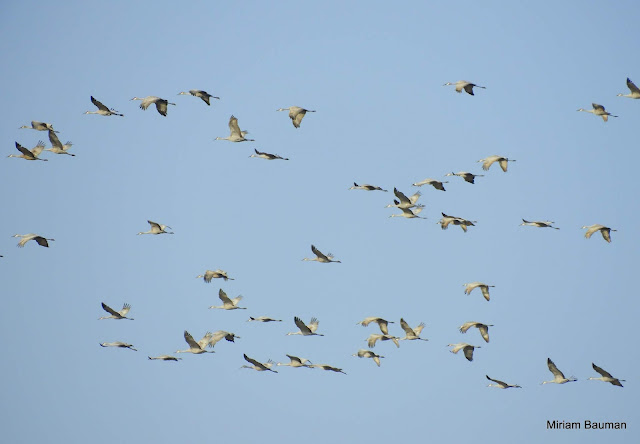 The sky just kept on delivering cranes, and even provided a hint of celestial  colour as a fitting backdrop. 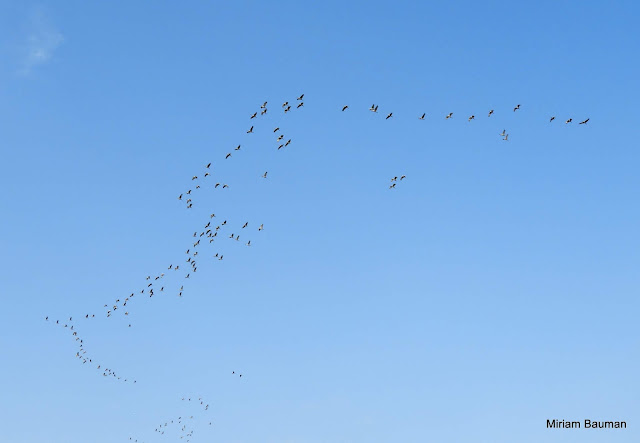 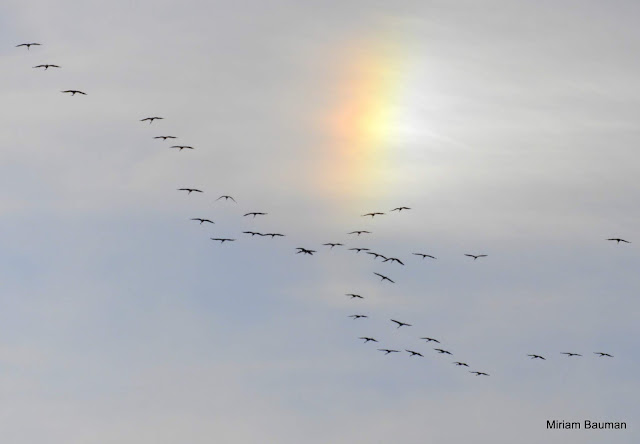 In Europe many have seen spectacular concentrations of Common Starling (Sturnus vulgaris) and while we do see large flocks in North America, they pale by comparison to the European spectacles. This was about as large a flock as we have seen and they wheeled around in unison, maintaining a tight formation, and thrilling us with their aerial exploits. 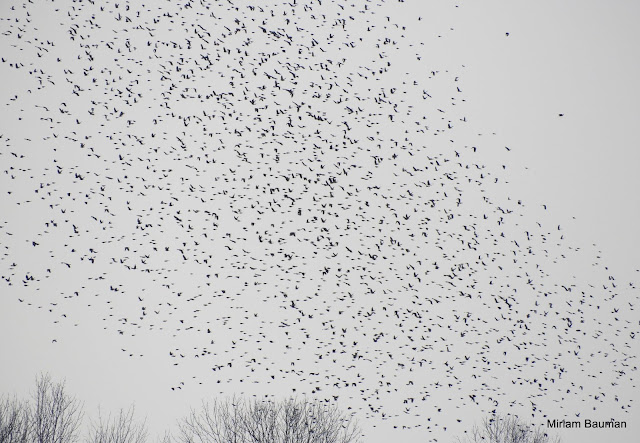 Normally we all meet at the harbour in Port Rowan, but we had been occupied with the cranes and swans and were distracted from our regular pattern, but we decided to visit the harbour before lunch to check out the waterfowl.
The fish huts looked serene in the bright autumn sunshine. 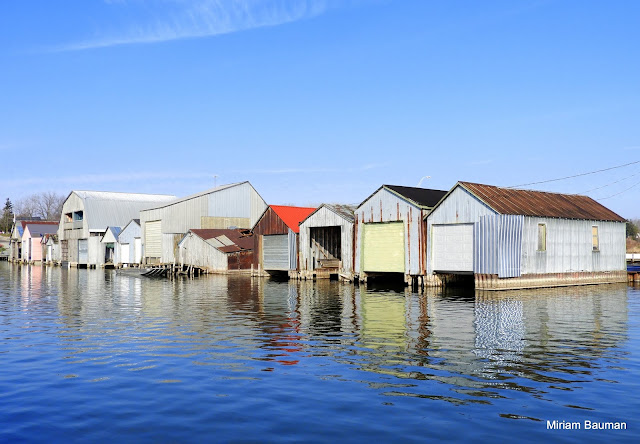 What few ducks were present were way out on the water. It is duck hunting season in Ontario, so perhaps they were wisely seeking safe haven in the middle of the bay. 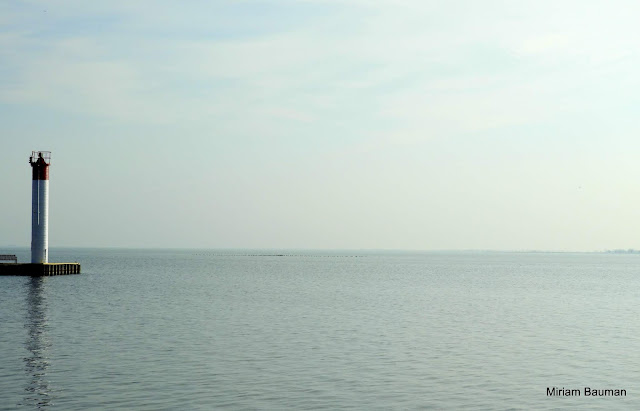 Most of the ducks in the image below were Canvasbacks (Aythya valsinaria).
Doubtless there were a few other species but we could not be sure of their identification. 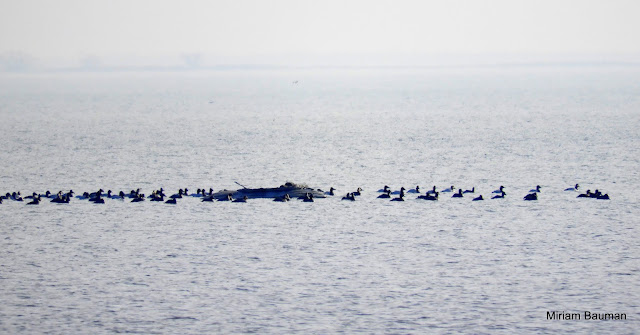 A Red-tailed Hawk (Buteo jamaicensis) was surveying the area, seeking prey no doubt, from atop one of the fish huts. 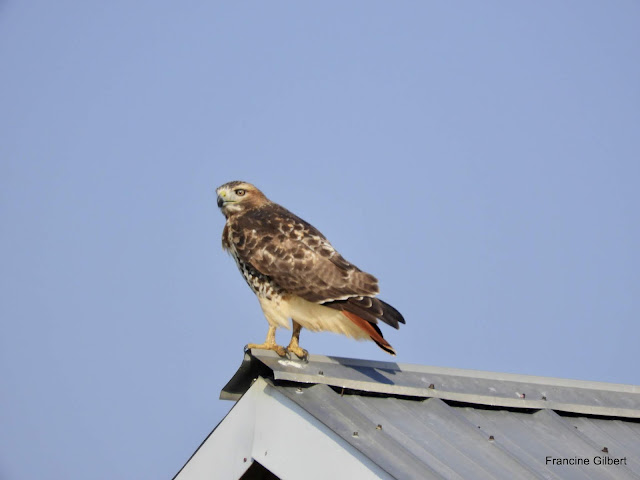 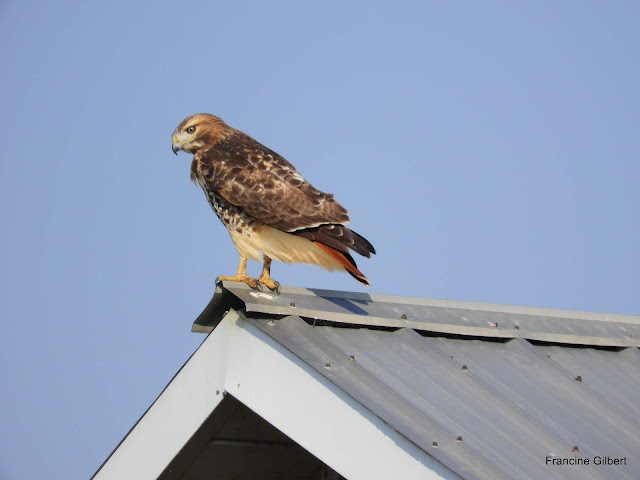 At nearby Bird Studies Canada headquarters a Cooper's Hawk (Accipiter cooperii put on a bit of a show for us. 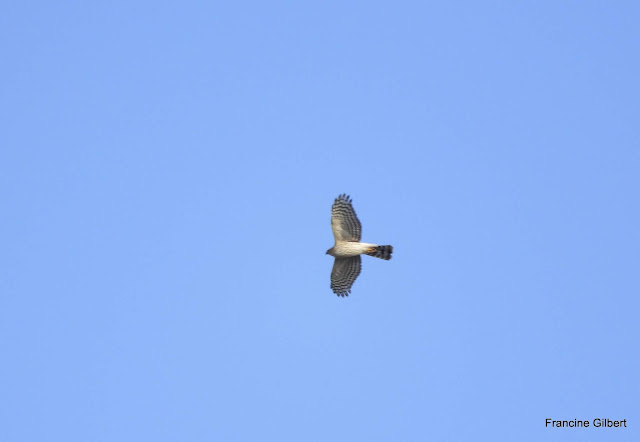 A couple of stops along the causeway produced very little in the way of birds. But some of the trees still retained their leaves and looked quite splendid in the sunlight of this fine day. 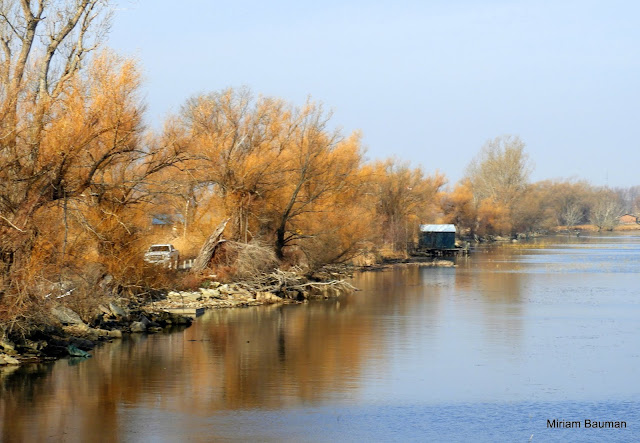 After lunch we went down to the area known as Old Cut, where Mary insisted on a group picture of some of us at least.