Does this qualify as a murmuration?

Immigrants to North America, throughout history, have experienced deep nostalgia for the familiar sights and sounds of their homeland, and from time to time acclimatisation societies were formed and non-native species of flora and fauna were imported into the New World. As far as birds are concerned, most species died out fairly quickly, but one of the species that has survived remarkably well, and spread to almost every corner of the continent is Common Starling (Sturnus vulgaris). It has become a serious threat to many native birds, especially cavity-nesters, aggressively displacing woodpeckers, bluebirds, swallows and others.
It is a singularly handsome bird, but almost universally despised despite its beauty. Few have a good word to say about it. 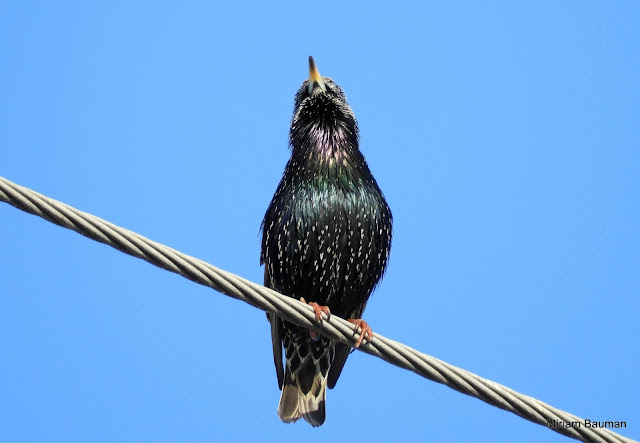 Whenever we go through the small town of Wallenstein we are impressed by the sheer number of starlings that are always present at one location. I find it difficult to count large flocks and generally err on the side of conservatism, but I cannot imagine that there is anything less than a thousand birds.
Compared with the enormous flocks of this species in Europe, forming those choreographed aerial ballets called murmurations, I realize that this congregation pales into insignificance, but it is impressive for us. Soon the flock will break up as the birds pair off for the breeding season, but for now they are still putting on a show. 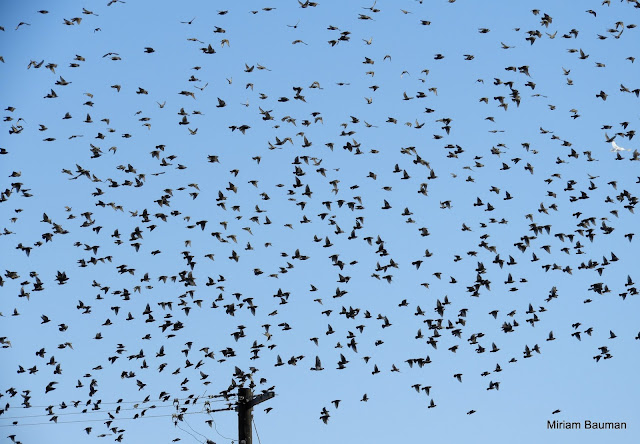 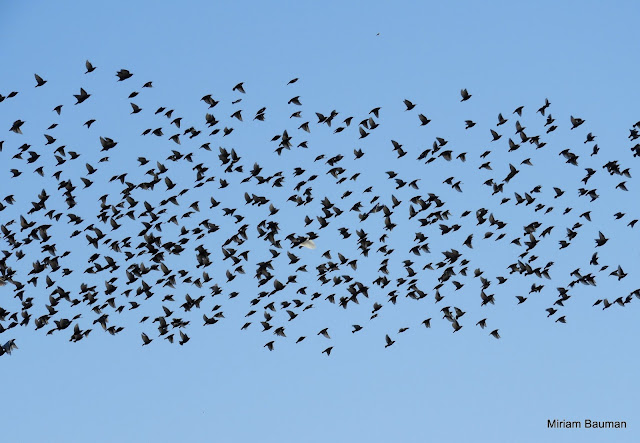 They swirl around and change direction as though they were one organism, and come in to perch together, crowding along the wires, on roof tops and in trees. 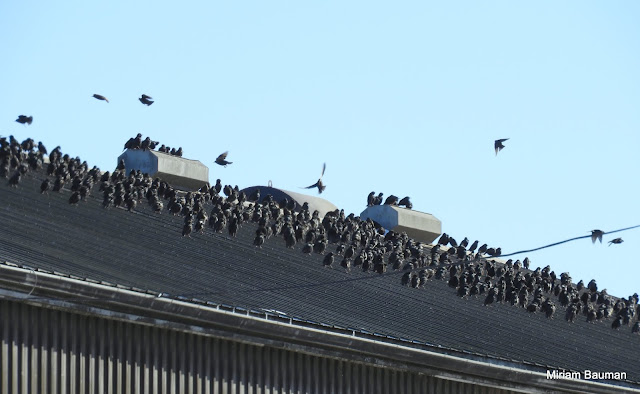 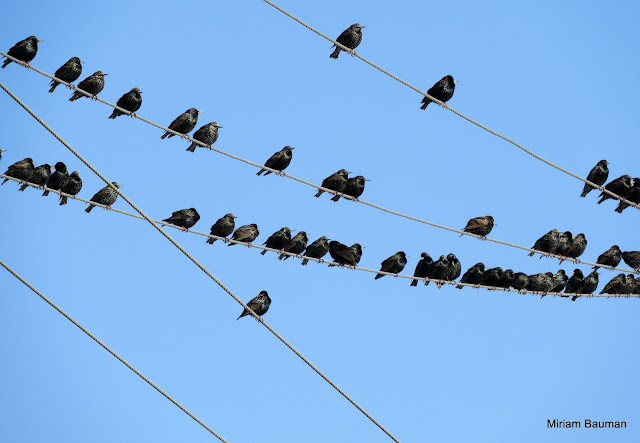 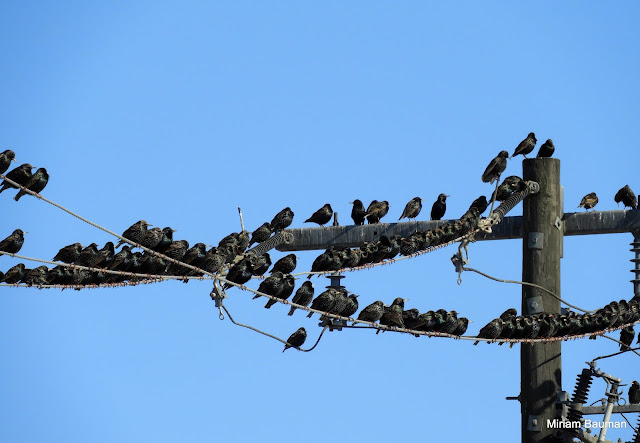 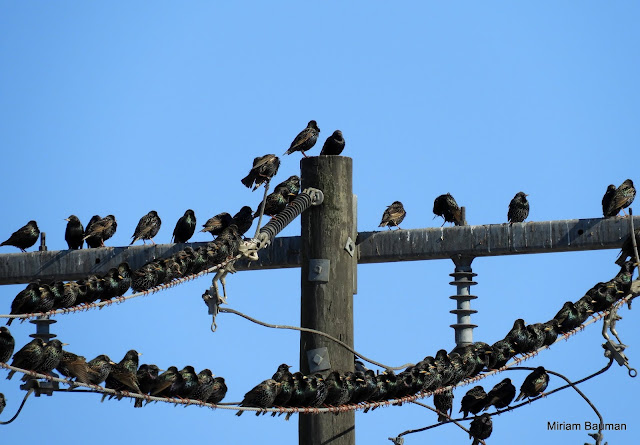 On some of the birds you can perhaps see the yellow bill with the bluish base, indicating that the birds are transforming from their basic plumage into full nuptial regalia. 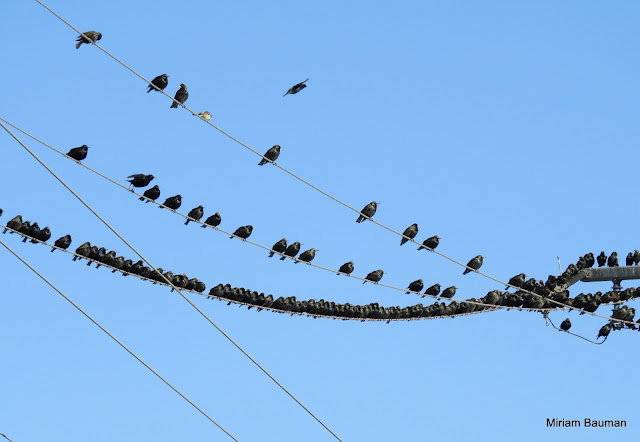 It is quite amazing to see the birds fly in and occupy every millimetre of space on a wire, darting in and wedging themselves between prior occupants, with never a hint of squabbling. 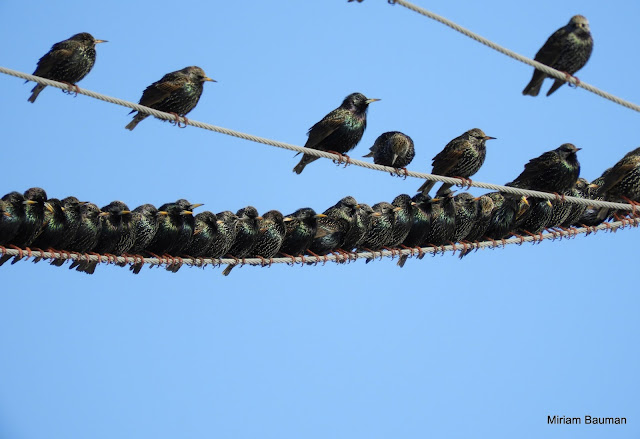 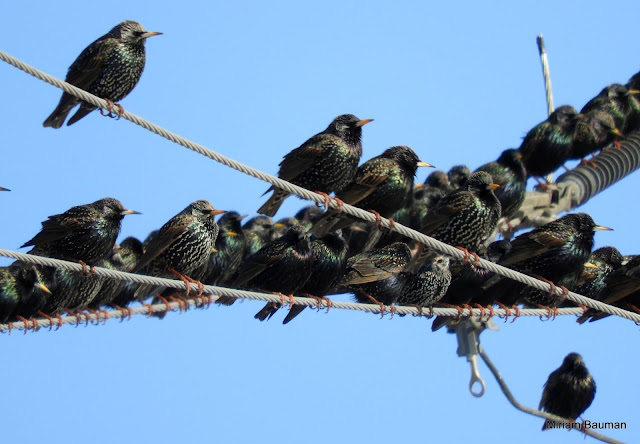 It is a remarkable sight and one that gives us great pleasure each time we witness it. 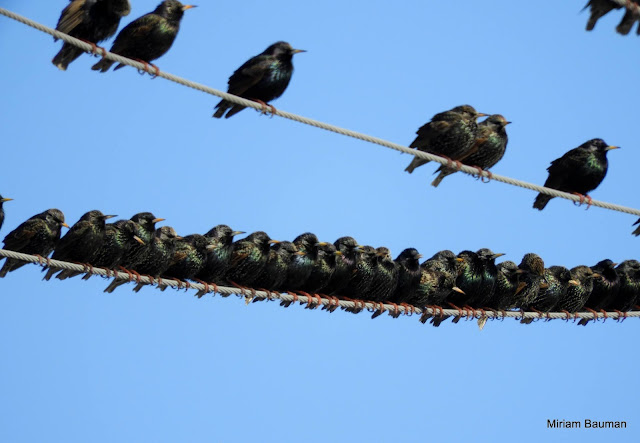 I might not be quite so pleased if they evict any of our screech owls from their nest boxes!
It was a beautiful day with bright sunshine and mild for the time of year. Local farmers are tapping the Sugar Maples (Acer saccharum) earlier than usual it seems. 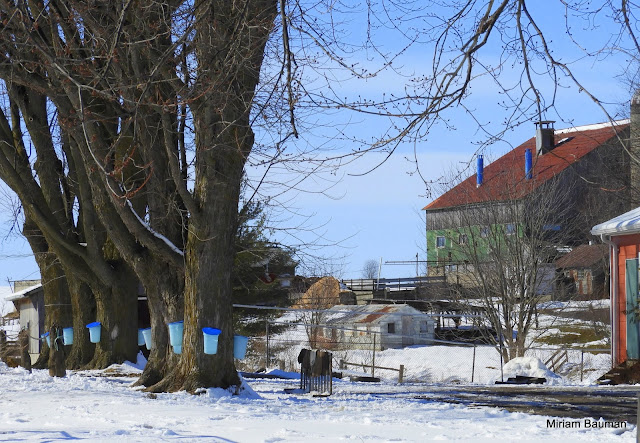 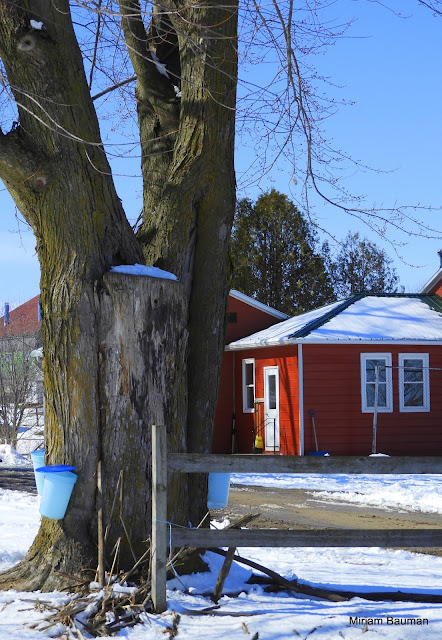 All the sap pails are now made of plastic (isn't everything?) and the old metal pails are highly valued as garden ornaments or planters.
This scene reminded me a little of African savanna with snow! 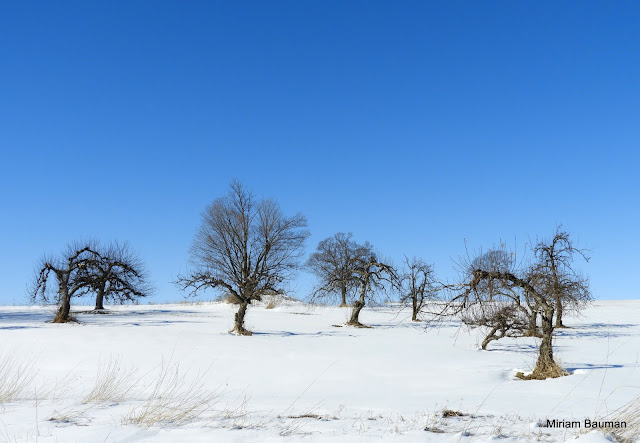 Black-capped Chickadee (Poecile atricapillus) is a very common species and this individual is demonstrating its acrobatic prowess at a suet feeder. 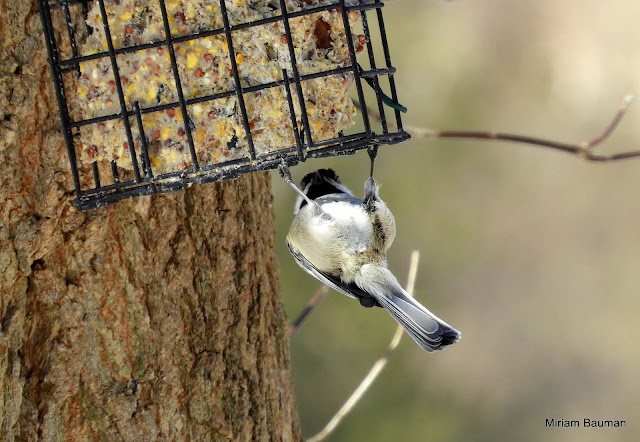 Another bird was feeding a little more conventionally as it gripped a seed between its feet and hammered it open. 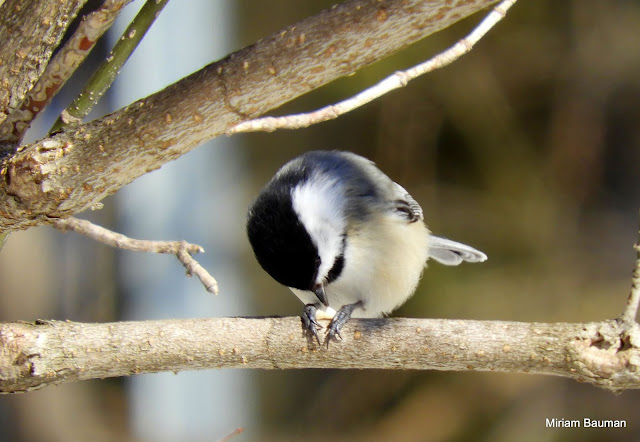 A female Downy Woodpecker (Dryobates pubescens) hitched her way up a weathered post, all the while probing for tasty morsels. 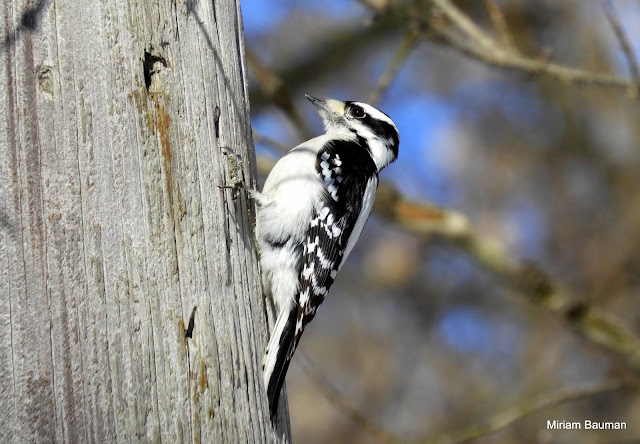 There was hardly a country road that we drove along that did not have large numbers of Horned Larks (Eremophila alpestris) in the fields, and feeding on grit and minerals at the edge of the road. 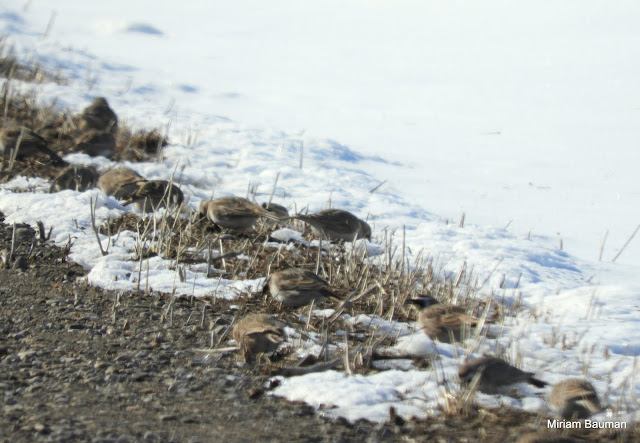 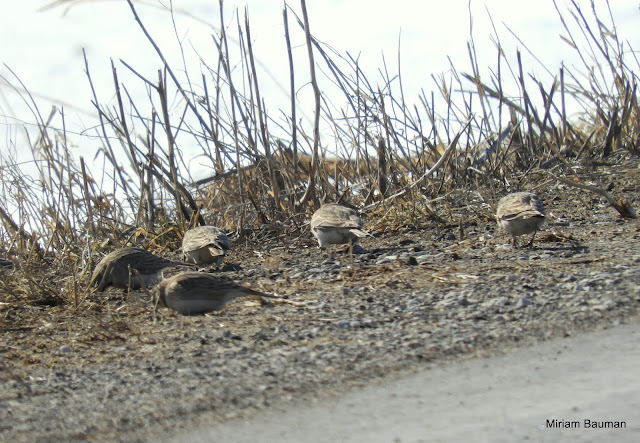 They are quite skittish and tended to fly ahead of us whenever we got close, but this bird was a little more obliging than most. 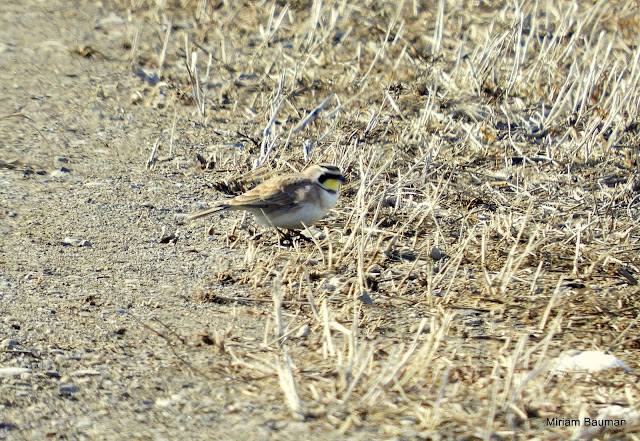 And another stayed on the road just long enough for Miriam to snap a picture. 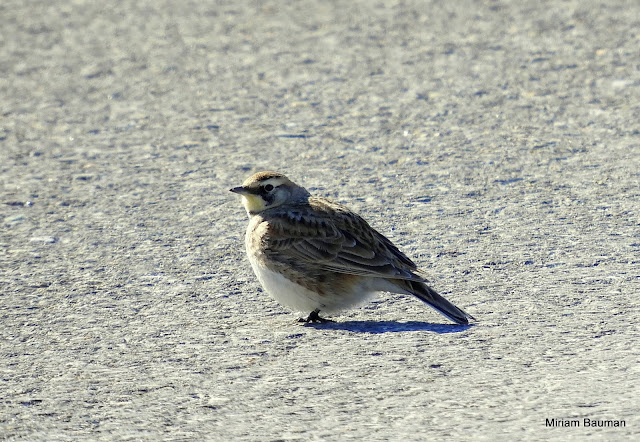 I can say with confidence that it is not often that Common Starling is the highlight of a day's birding but on this day it certainly was. After all, nature's spectacles sometimes present themselves when you least expect them. Enjoy them while you may.
Posted by David M. Gascoigne, at 13:00