It was for us a perfect winter's day. Fresh snow covered the landscape, pristine and white, pure almost, and the temperature was minus nine with just a hint of a breeze. There could hardly be a more agreeable day.
Winter here is characterized by a suite of birds that come from farther north and are only present during the coldest months of the season. We set out to discover them and to bask in the glorious conditions of this most splendid Great Lakes region in which we are privileged to live. 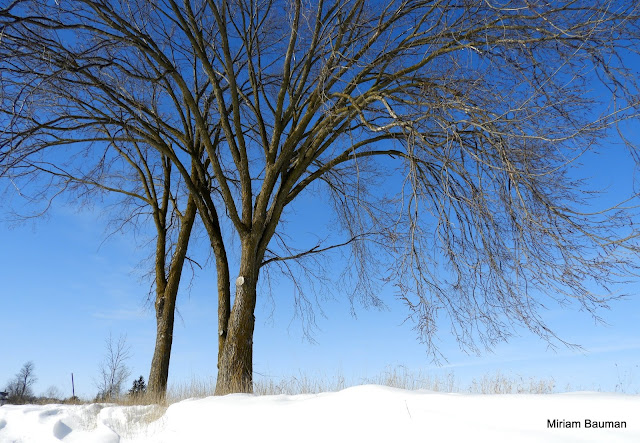 We had good luck finding an interesting variety of species but the opportunities for photographing them were scant. Usually they were too far away, or skittish, and not remaining in one place long enough to permit a picture.
The first bird we saw was this interesting dark morph Rough-legged Buzzard (Buteo lagopus) and I think that Miriam did a first rate job of obtaining a few decent images of a bird that was not especially close, and was partially hidden by branches. She would carefully direct me to get the car into position for a better angle and by shooting multiple times from different vantages, here is what she came up with. 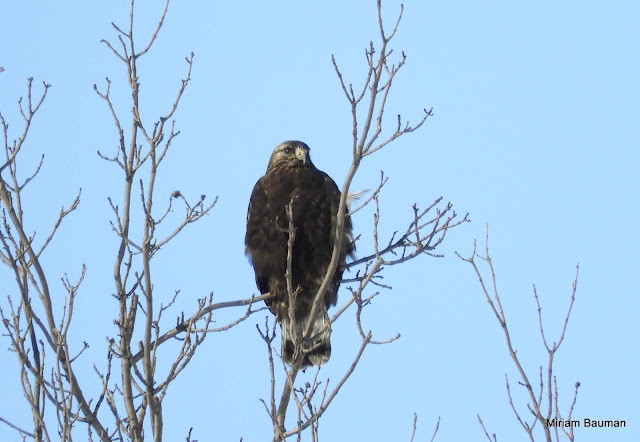 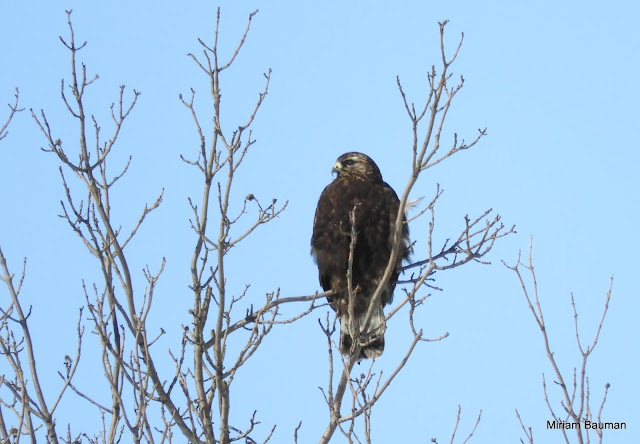 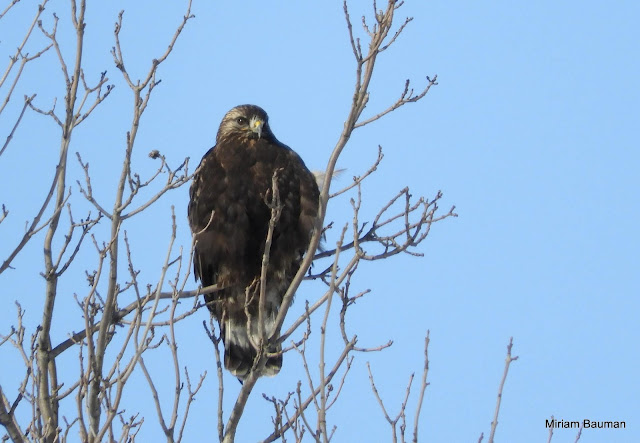 A Red-tailed Hawk (Buteo jamaicensis) in a distant tree was impossible to capture. 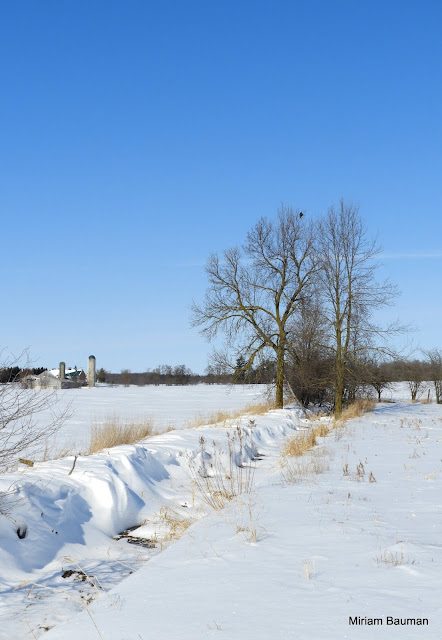 Initially, I had thought that due to the paucity of bird pictures I would not create a post based on this day out, but it occurred to me that for people who don't live in an area where snow occurs (and even for those that do) images of the winter landscape might be interesting nevertheless.
This farmer had obviously taken advantage of frozen ground to bring in lumber from the forested areas on his property. 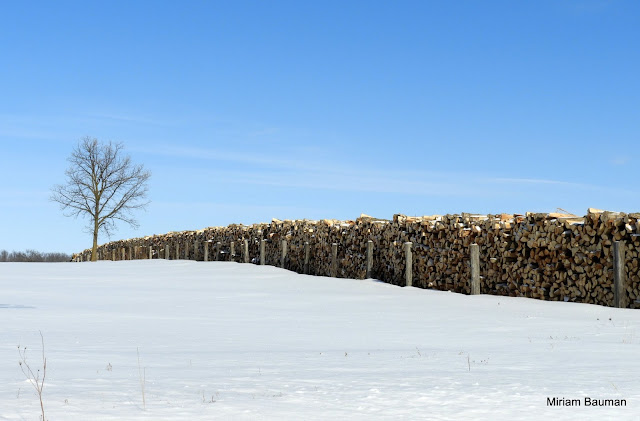 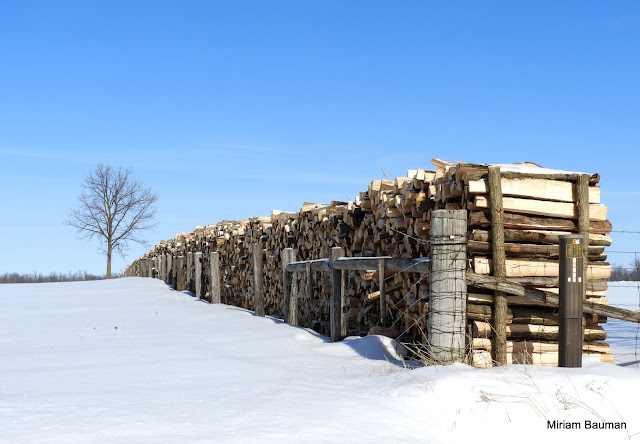 I am not quite sure what this is all used for, but it is obviously a business, for there is far more than any one farm could use for fuel, for example.
Farms, and their associated barns and outbuildings look appealing at any time of year, but perhaps they attract our attention more in the winter. 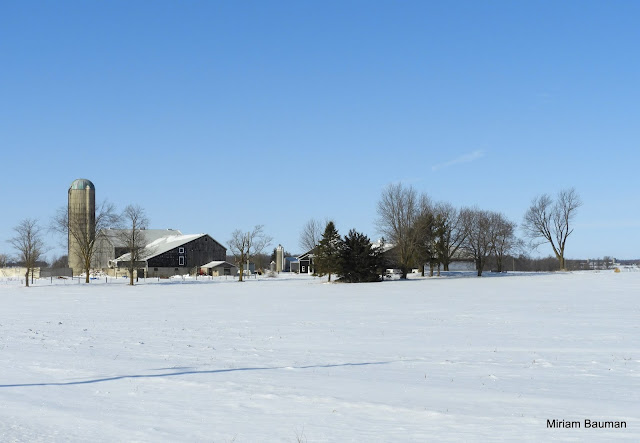 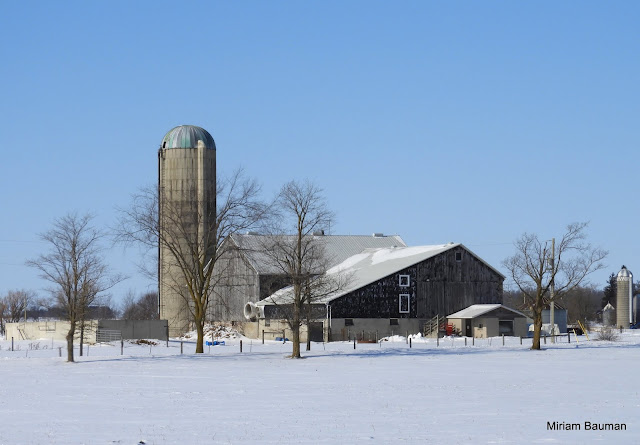 Another tree furnished a fine perch for a keen-eyed Red-tailed Hawk to scan the fields for rodents; once again, however, it was too far away to show any detail on the bird.

Many of the rural townships are characterized by a one-room schoolhouse, like the one Miriam attended as a young child. Some, like this structure here, have been modified as a residence. 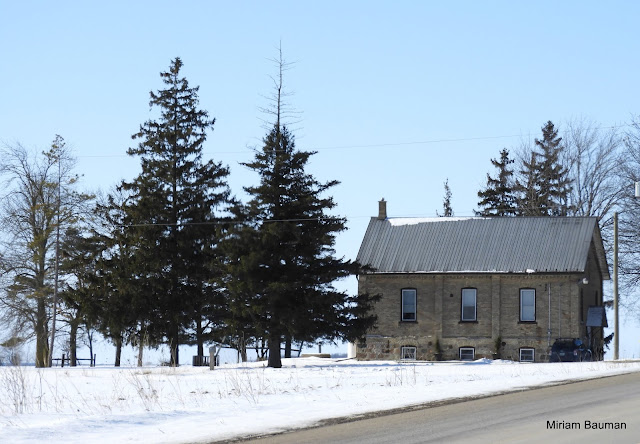 There was snow in the woodlots. Animal tracks in the morning will reveal the creatures that have travelled through there overnight. 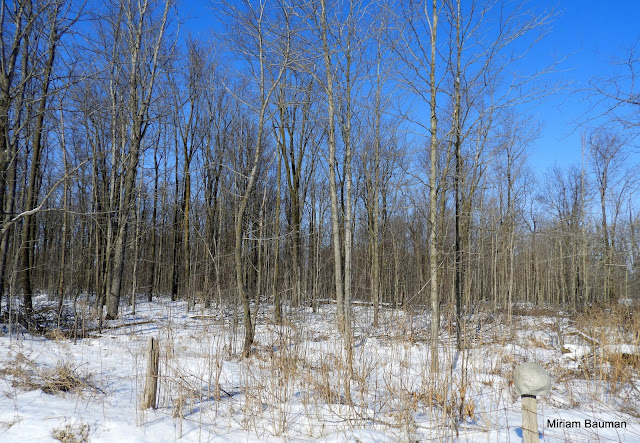 A red barn made a bold statement against the white of the snow. 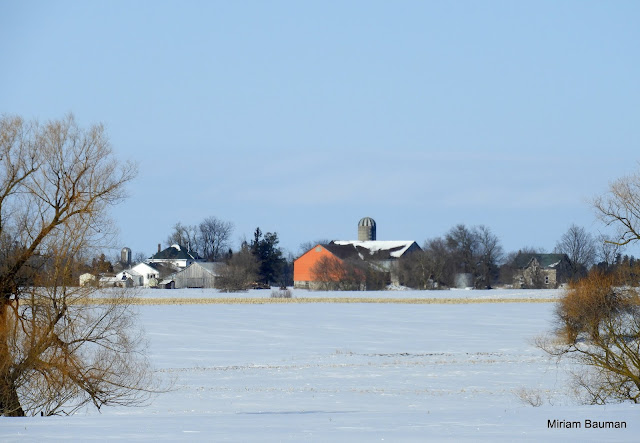 This grand old house has stood for many a year and no doubt its walls would have stories to tell could they only talk. 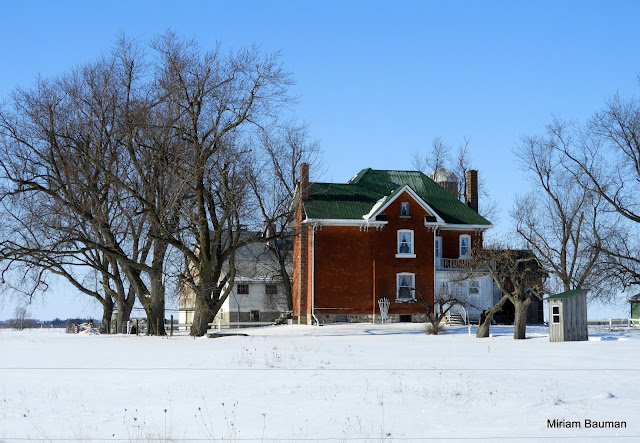 We finally saw a Red-tailed Hawk fairly close, but despite Miriam's best efforts the pictures were a little blurry. I am using one anyway! 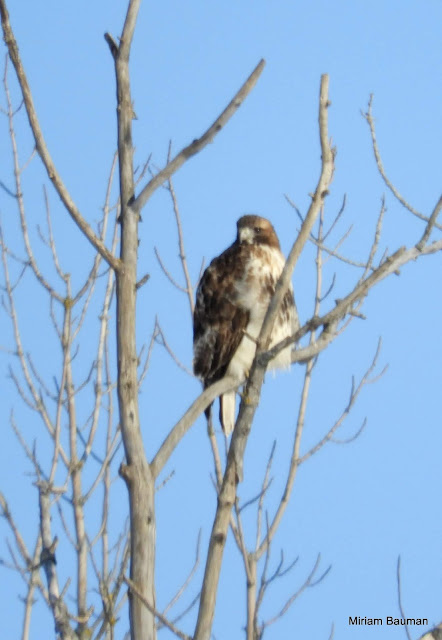 There were many Amish folk out and about and this group seemed to be involved clearing a brushy area in some fashion. 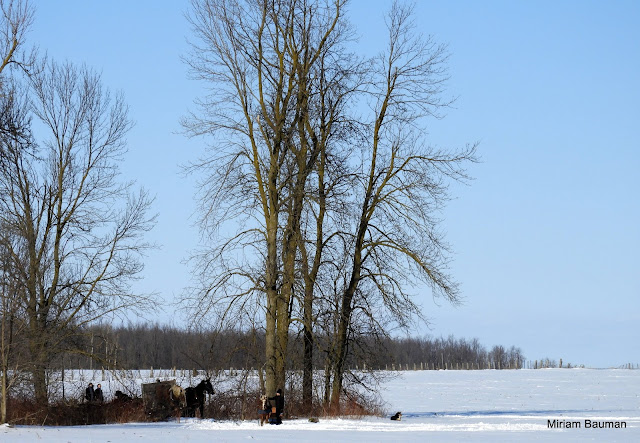 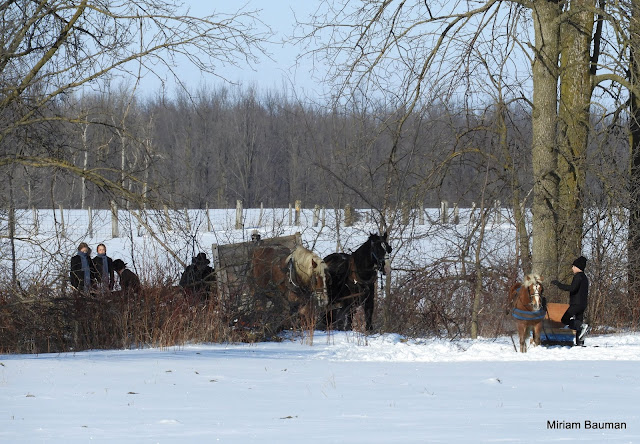 The young boy had his own pony and sled and seemed determined not to stray too far from the pony which he petted constantly. The dogs were content to act as bystanders. 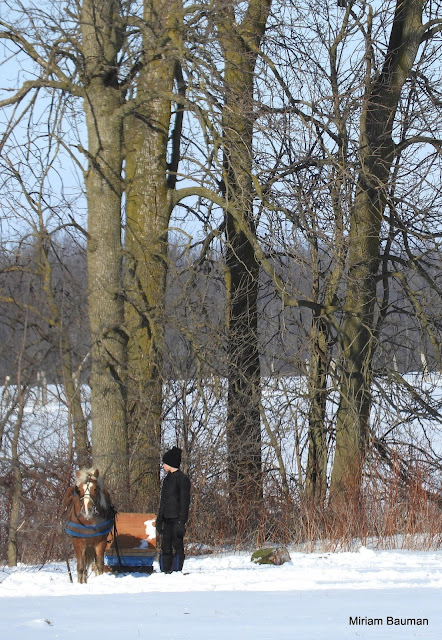 This old shed has obviously seen better days and it is questionable as to whether it will withstand the next storm. 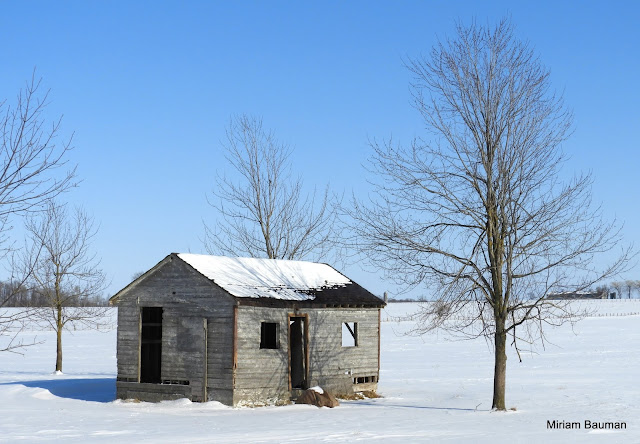 It is a longstanding practice in the Mennonite community that as children get married and need their own space, that additions are simply added to the existing house, some of the structures becoming very large as a result, as shown in the images below. 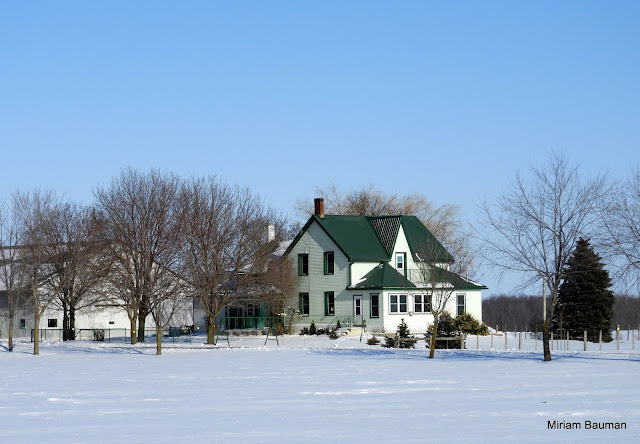 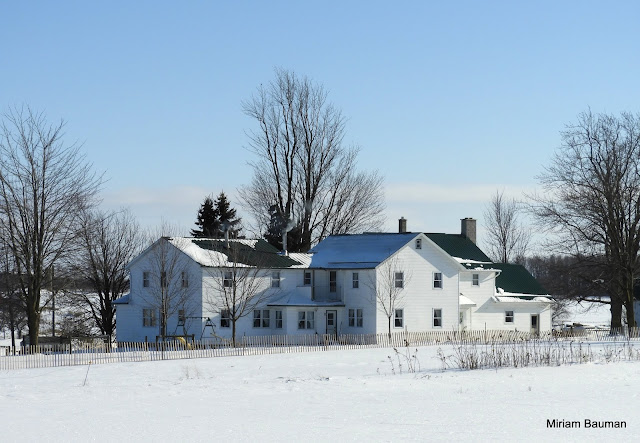 A fine sunny day was not to be missed as an opportunity to hang the washing on the line. Mennonite ladies' fashion on display. 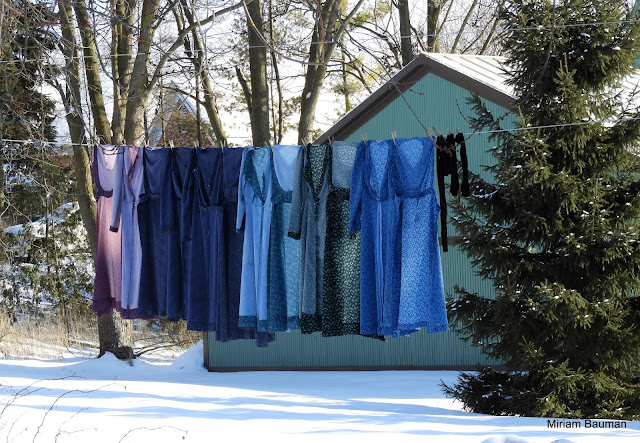 Some sensible people just don't worry about the latest trends and figure that what has worked for centuries still works today! I wholeheartedly agree.
Posted by David M. Gascoigne, at 13:13