After a winter that has been significantly mild, it was cold overnight and when we set out at 07:00 it was minus 5°C. The forecast was for sunshine all day, little wind and a projected high of 3°. That is pretty much how it turned out. It was a glorious day to be out birding, especially in the company of such a convivial group.

Stop No. 1, LaSalle Park Burlington, ON 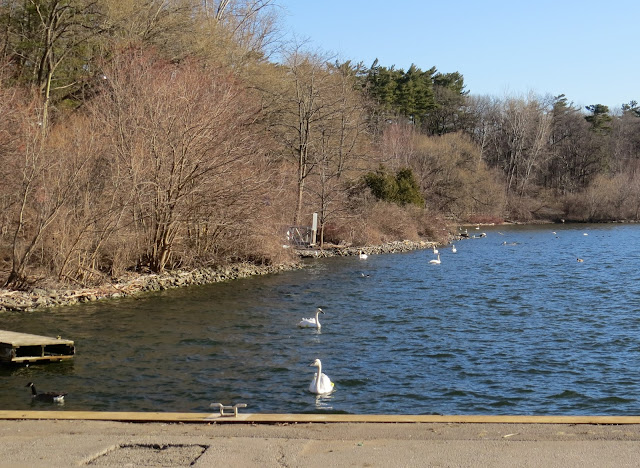 As can be seen from the photograph above, there was not nearly the usual concentration of Trumpeter Swans Cygnus buccinator, but still enough of these magnificent birds to enable everyone to fully appreciate just how fortunate we are to have them so accessible in the winter. I am assuming that most of them have already migrated north, perhaps spurred on by the unusually mild conditions over the past several weeks.
A few in the group had never before seen a Trumpeter Swan and the opportunity to observe them at close range was a high calibre birding moment for seasoned observer and newcomer alike. 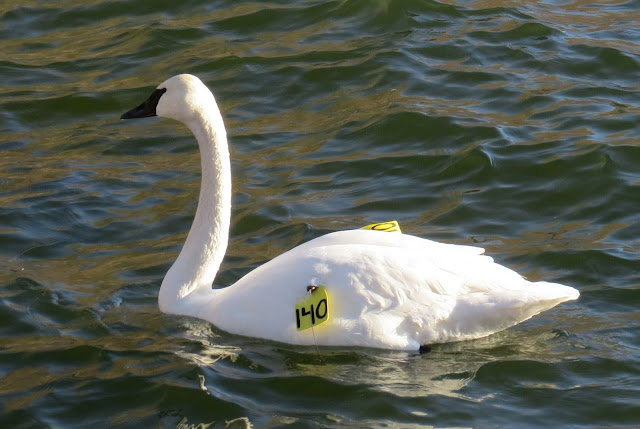 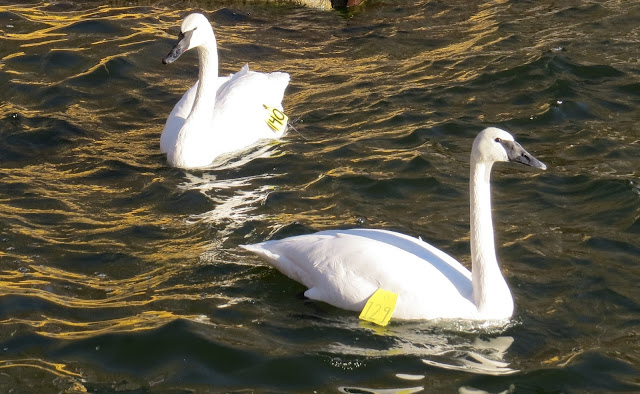 We spent a good deal of time scoping ducks out in the bay, with many different species being present. White-winged Scoter Melanitta deglandi was the most numerous with long, strung out rafts of them, diving almost synchronously to feed on the plentiful mussels of Lake Ontario. Common Goldeneyes Bucephala clangula were exhibiting courtship behaviour and numerous Buffleheads Bucephala albeola swam and dived with the other species.
As we walked from one location to another, everyone had a chance to mingle. Here Geraldine Sanderson and Meg Slater are striding away from other members of our group who seemed to be  attracted by something in the opposite direction. 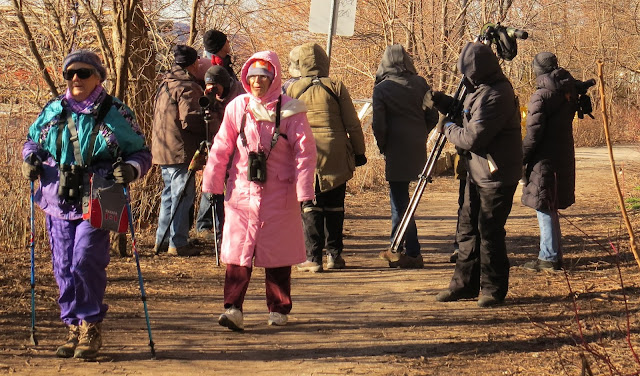 LaSalle Park is always a delightful place to visit in any season; even the most casual stroller is entertained by the swans and geese loafing along the shore. 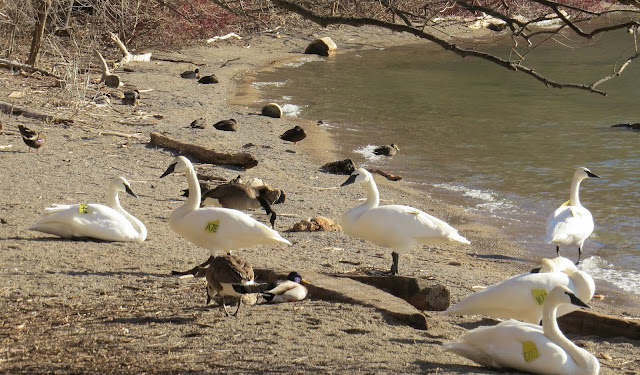 American Black Duck Anas rubripes is a species that can be reliably located at LaSalle but it is always wise to check them carefully, since there is such frequent hybridization with Mallards Anas platyrynchos. Some authorities conclude that Black Duck will ultimately be swamped by Mallard and will cease to be a viable species. 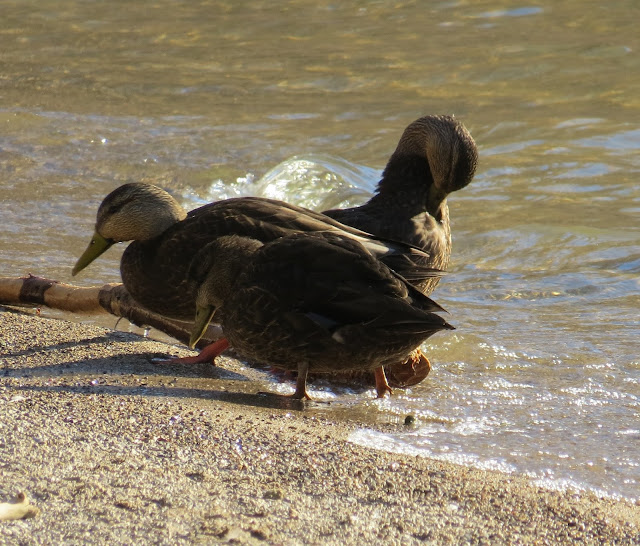 Relatively few species were observed here, but everyone had excellent opportunities to observe Long-tailed Ducks Clangula hyemalis close to shore.
No one among us failed to be impressed by the beauty of this species.

Stop No. 3, Paletta Park, Burlington, ON

This stop is always highly prized by everyone, especially the ladies, for there is access to warm, clean washrooms with soap, hot water and paper towels, a much better choice than a Johnny-on-the-Spot on a cold and windy pier!
The sharp eyes of Jim Huffman netted us a male Brown-headed Cowbird Molothrus ater high atop a tree, for many the first sighting of this species for the year. 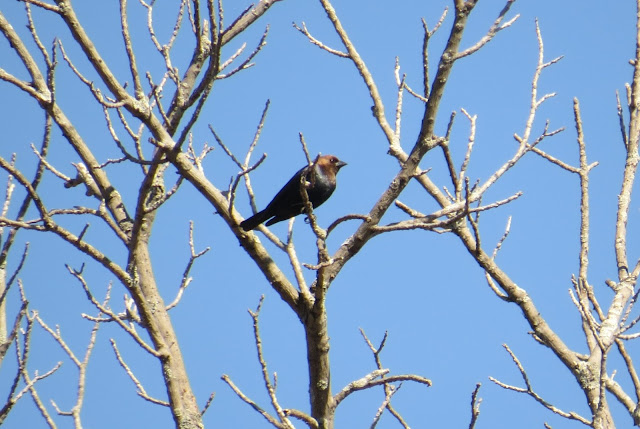 In the next tree a male Northern Cardinal Cardinalis cardinalis was doing all within his power to attract a mate. Cardinals have been singing for a couple of weeks now, and the cheerful springtime refrain is a delight to everyone's ears. 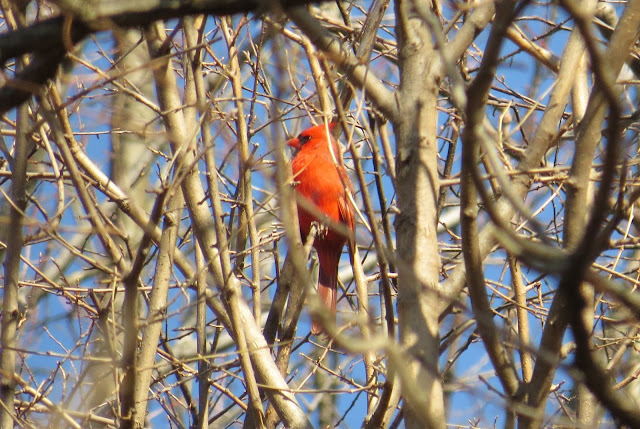 At Paletta Park one can always be sure of a congregation of Mallards lining the creek. It won't be long before the adults will be accompanied by processions of ducklings. 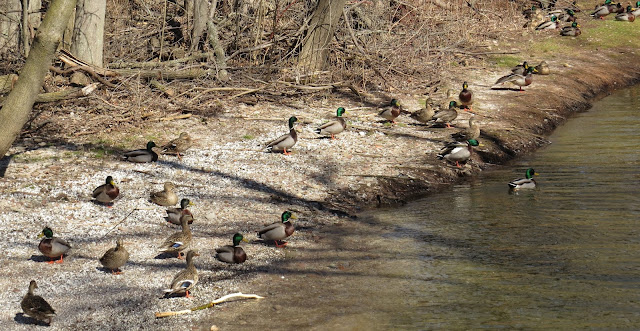 It was almost noon and we decided to have lunch here. The consensus was that it was a little too cold to eat outside, so everyone ate in the warmth of their vehicle.

Stop No. 4, Bronte Harbour, Oakville, ON

We were greeted in the inner harbour by a pair of Red-necked Grebes Podiceps grisigena, and it appears that they have already started to prepare a nest in one of the tires set out for them, anchored to the bottom. 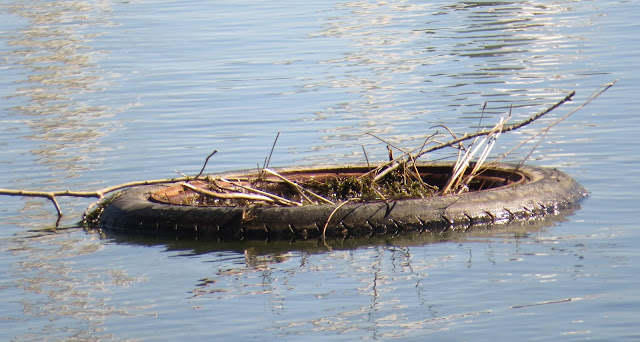 Everyone was interested in this feature and for many of the group it was the first time they had visited Bronte Harbour. 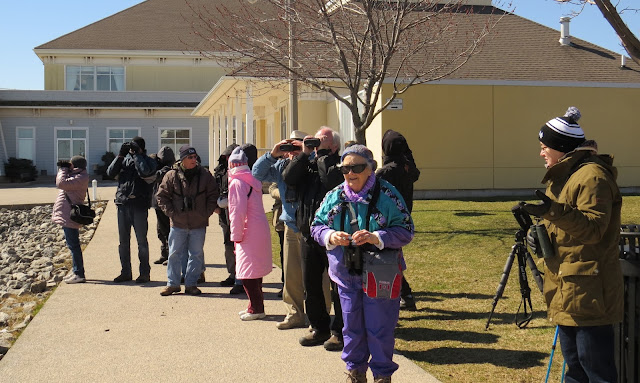 For many years there has been a substantial colony of American Cliff Swallows Petrochelidon pyrrhonota, with nests constructed along the wall of the restaurant. House Sparrows Passer domesticus have occupied many of them, but when the Cliff Swallows return from the south they seem to be able to reoccupy at least some of the nests from these usurpers. 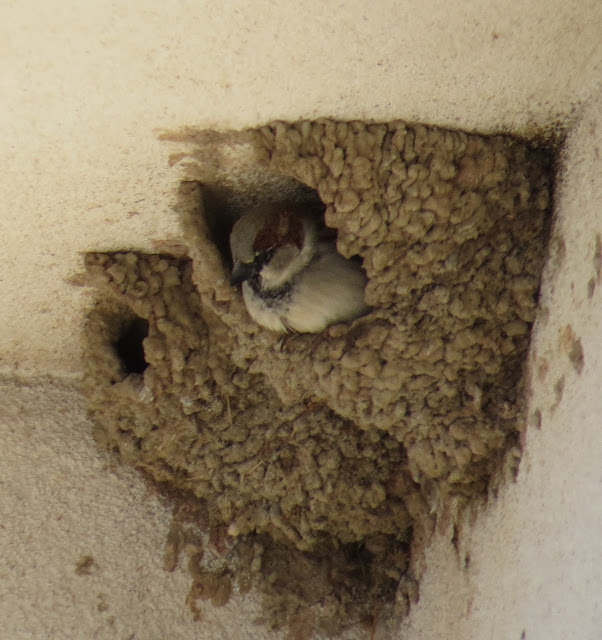 Perhaps the greatest attraction of all along the entire waterfront is the Long-tailed Duck. Even though we already have hundreds of photographs of this species it's hard to resist taking a few more! 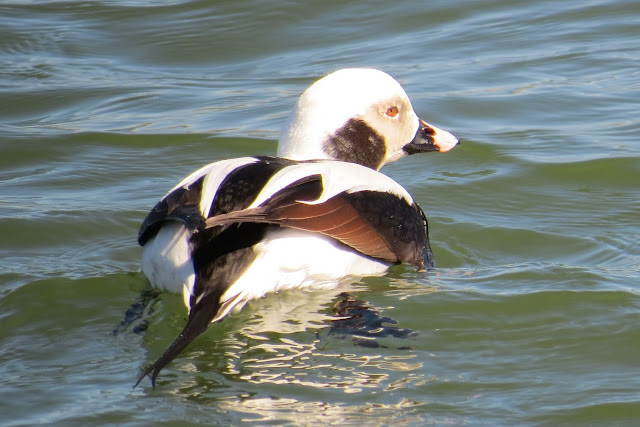 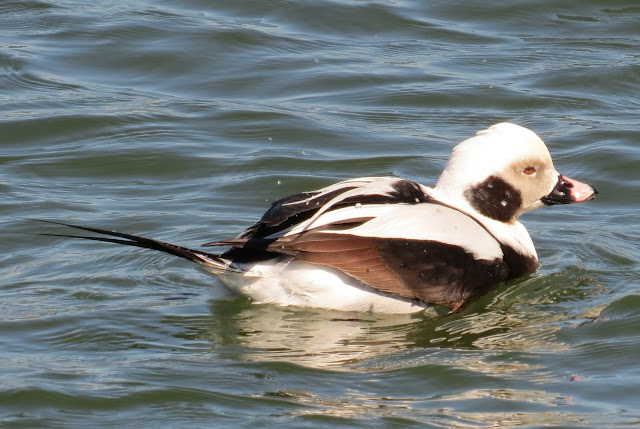 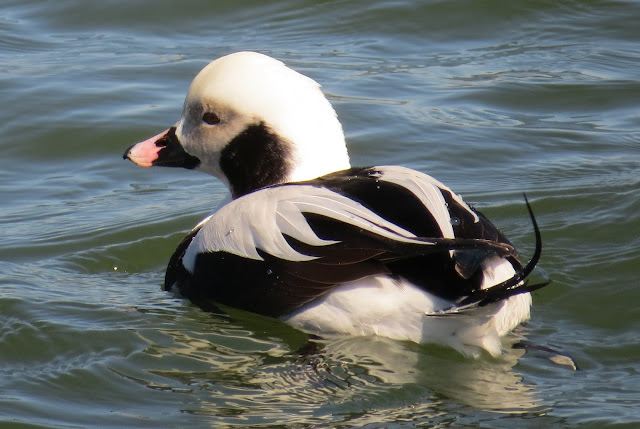 A male Common Goldeneye showed us exactly how it gets its name. 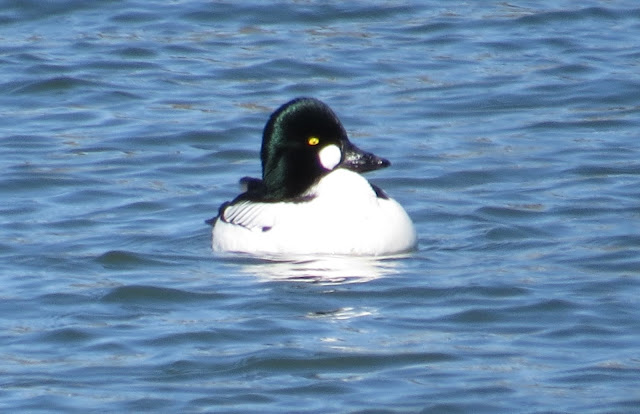 Here is another shot of our merry band of birders at the end of the breakwater. Larry Hamel is looking intently at something he has spotted, wife Judy at his side.

Perhaps the most entertaining and inspirational part of the day was about to begin. A pair of Red-necked Grebes yodelled to each other and began that unique courtship routine when they dance across the water in synchronization, each bill dipping in concert with the other, necks angled precisely together. It really is a sight not to be forgotten. 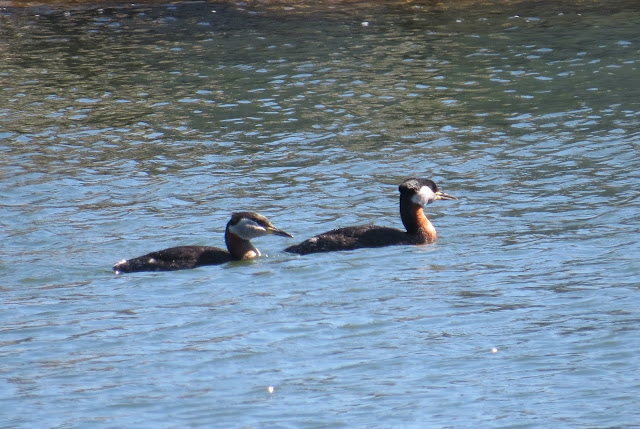 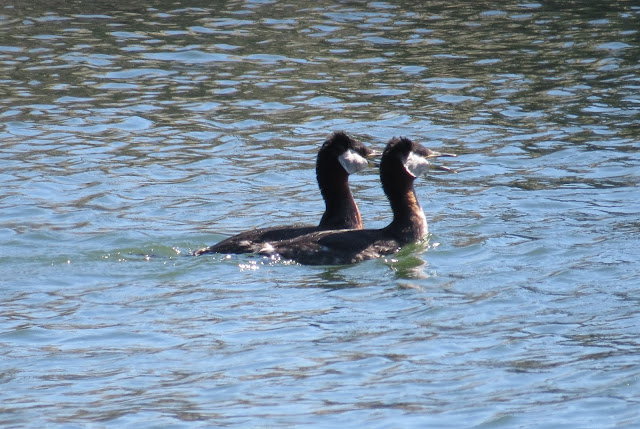 Another pair of grebes was content to go about their business; a pair of Common Mergansers Mergus merganser are in the background. 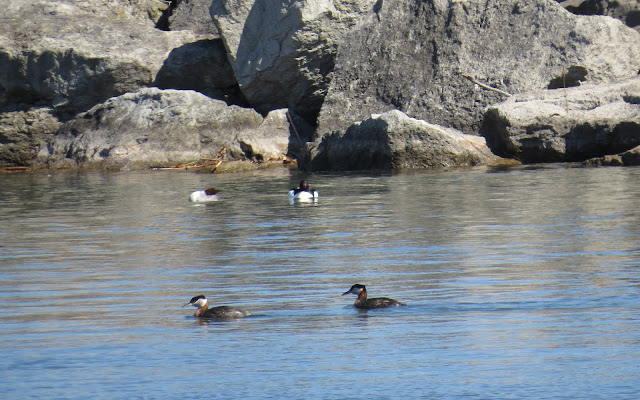 Mute Swans Cygnus olor are permanent residents of Bronte Harbour and handsome birds they are indeed. 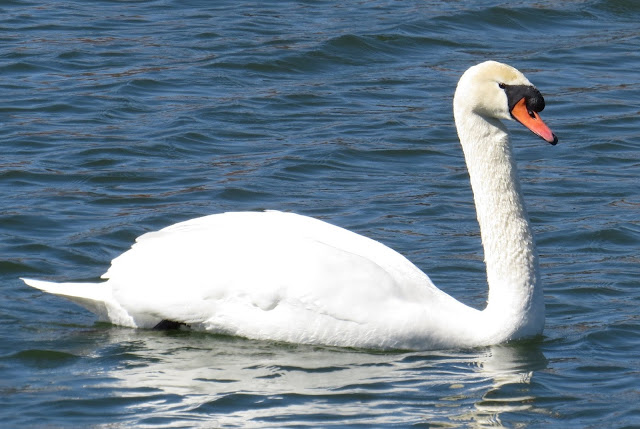 On the walk down to the breakwater, Miriam had heard a Killdeer Charadrius vociferus and on the way back to the vehicles we saw it grappling with a worm in robin-like fashion. This picture was taken just after it had swallowed its prize. 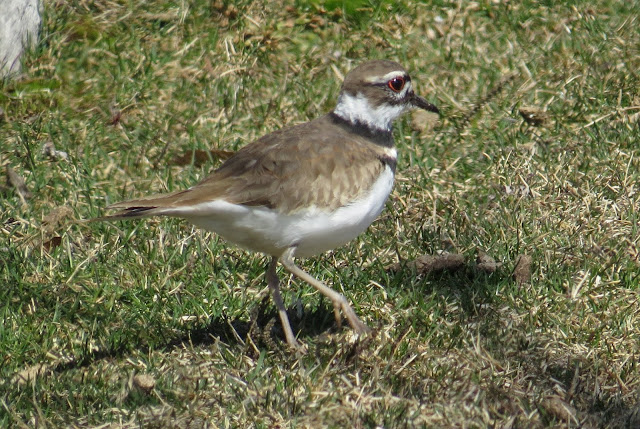 The activity here was was hardly, well - active! And many participants were tiring after a long day, so we did not tarry long, and everyone dispersed to begin the hour or more journey home.
I am always entranced by the sheer beauty of Ring-billed Gulls Larus delawarensis and I offer pictures of these attractive birds for your viewing pleasure. Learn to appreciate these common birds. They are a wonderful part of our diverse and amazing avifauna. 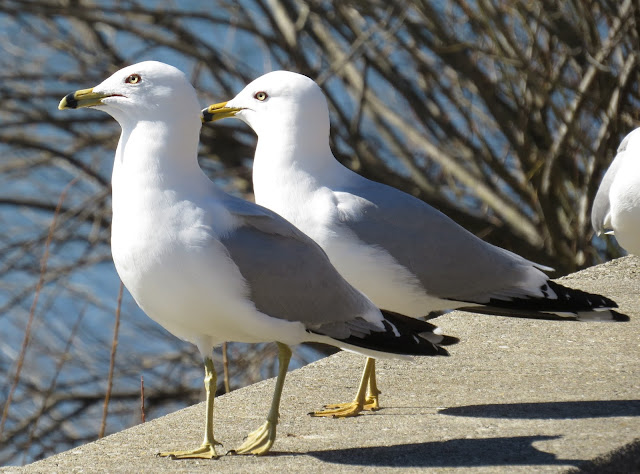 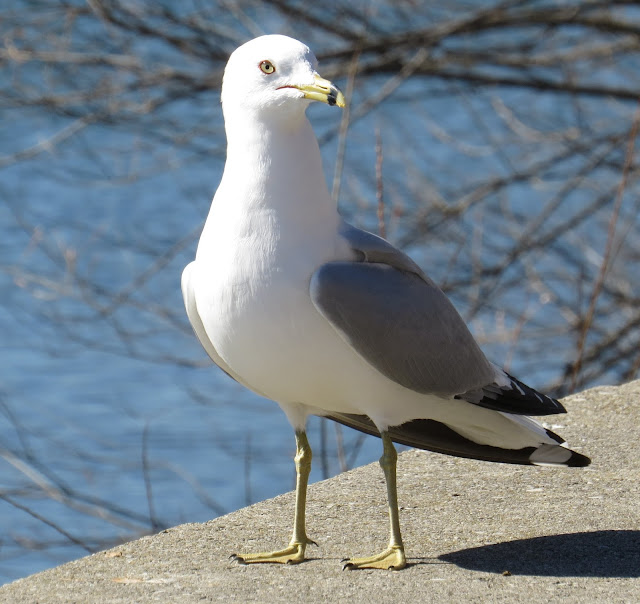 Thank you everyone for permitting me to accompany you on this exploration of nature. It was both a pleasure and a privilege to share my day with you. May we do again often!

I cannot seem to get the spread sheet into a format where I can copy it to my blog. I will keep trying and if I succeed will add it to this post. In the meantime if you would like a copy please let me know and I will send it to you as a separate attachment.
Posted by David M. Gascoigne, at 06:02