I know this is a bird blog, but there is not a whole lot about birds in this post.
Once again, we were invited this year to participate in a wine-tasting excursion to Niagara-on-the-Lake by the WLU Alumni Association, and we jumped at the chance to take part.
It was one of those classic Ontario days as we set off from home; the first full day of summer in fact, with a temperature in the pleasant mid twenties and little humidity. It was the kind of day to do whatever your heart desired, and for us a journey through Ontario's wine country seemed about as good as it could get.
Having just said that there is not much about birds in this report, we never in fact stop birding at one level or another, and it was with great delight that we registered the fact the two Western Ospreys were on the nest, visible where the highway crosses over the Grand River. This spectacular fish hawk has made a recovery from the darkest days of chemical contamination and is now a relatively common sight in our area.
Our well-equipped, comfortable bus moved seamlessly along the highway and it was not long before we were disembarking at our first winery, Foreign Affairs Winery. 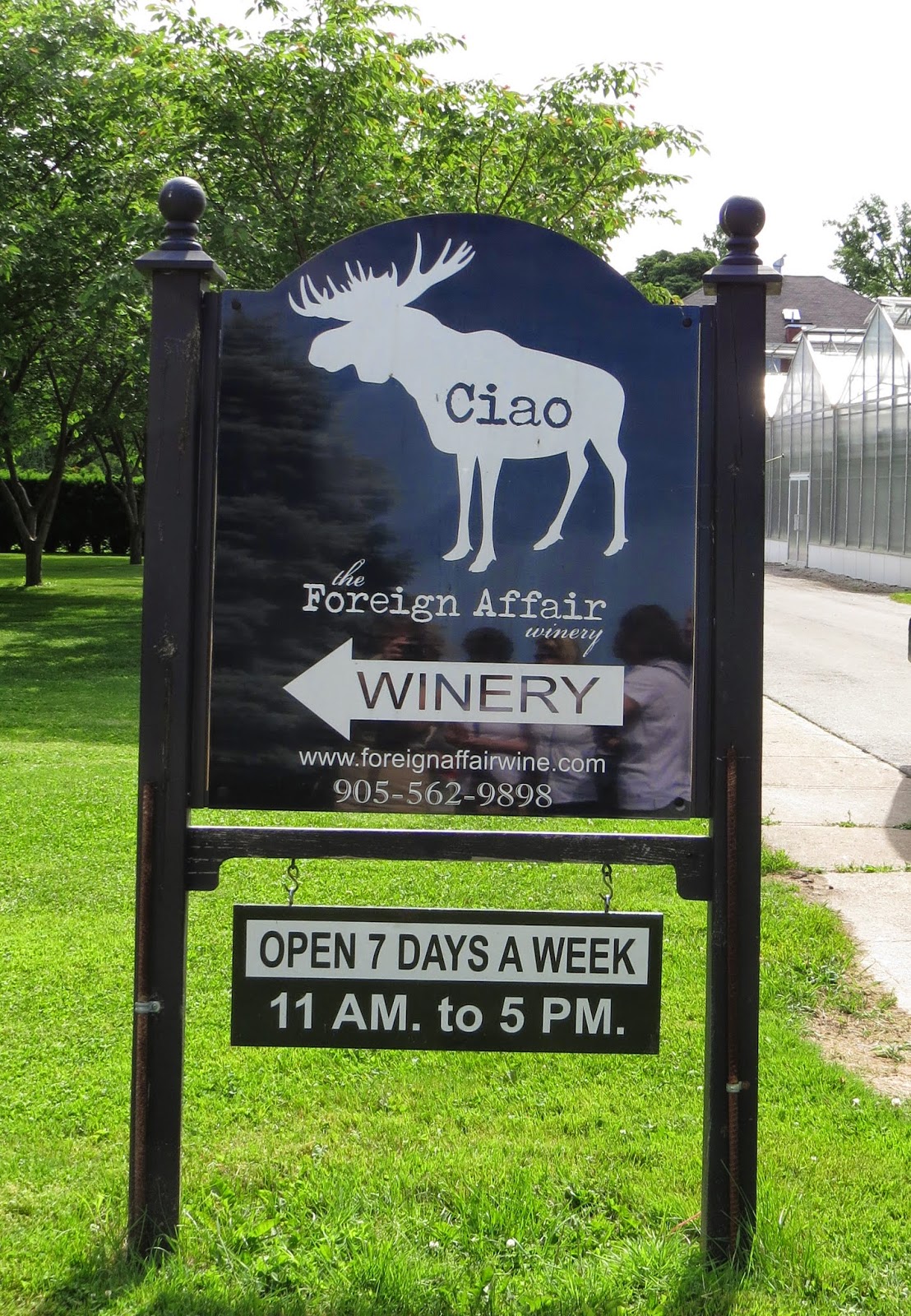 This may seem like a bit of an odd name for a winery and an explanation is in order. The owner, Len Crispino, was for most of his career a servant of the Government of Ontario in one capacity or another, and spent a period of about ten years representing Ontario in Milan, Italy. During this period he fell in love with wine produced by the distinctive process called Amarone in which the grapes are all dried before the wine is made, and against his own better judgement at times, and against the sober second thoughts of his friends and family, launched himself into the wine business in Ontario. 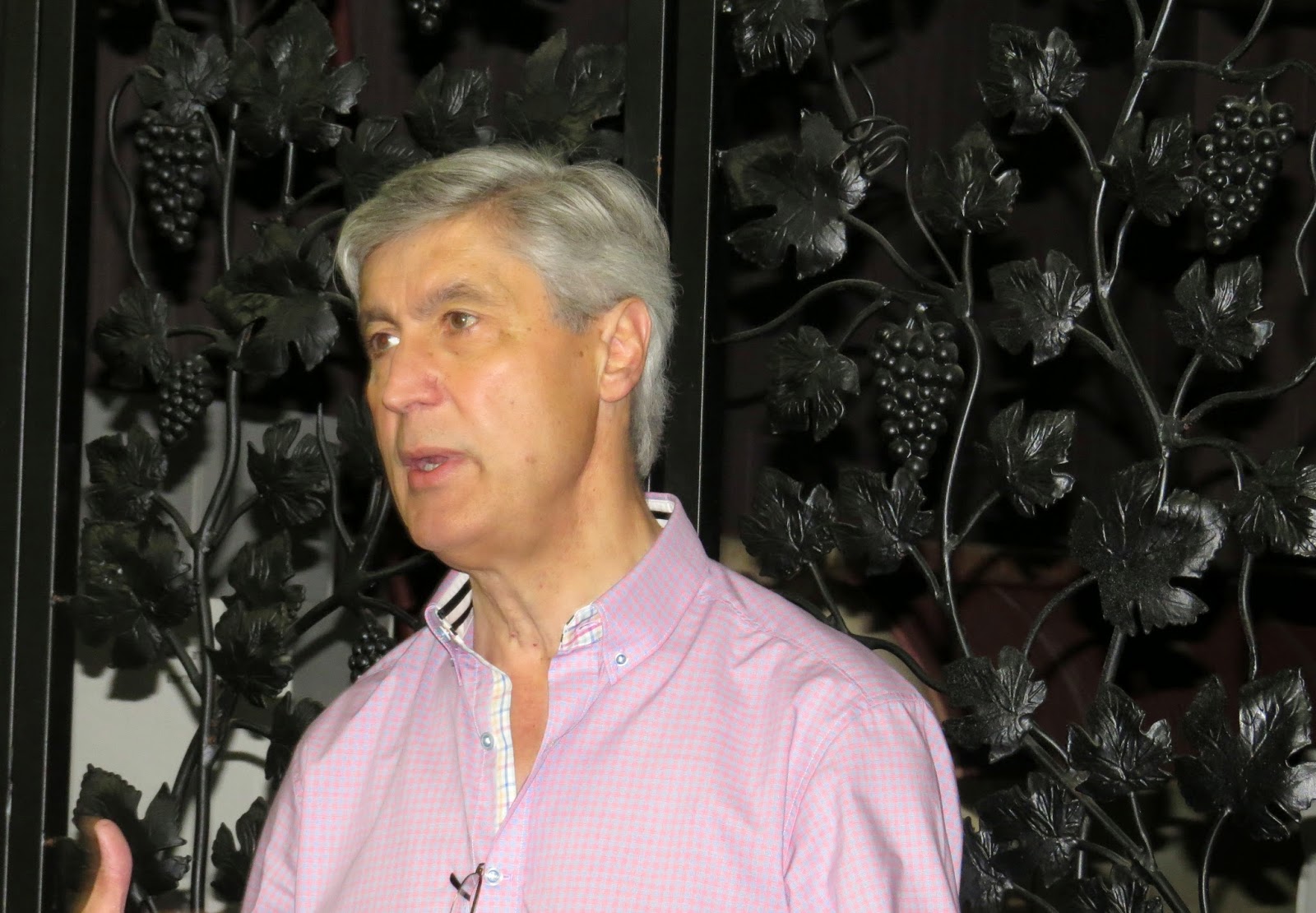 After some serious initial setbacks, and some misgivings in the early stages, Len persevered and now has a viable winery producing a range of wines with the distinct character imparted by the tradition of Amarone.

Following the tasting of three delicious examples of the output of this winery, we were able to make our purchases in their spacious showroom and retail location. 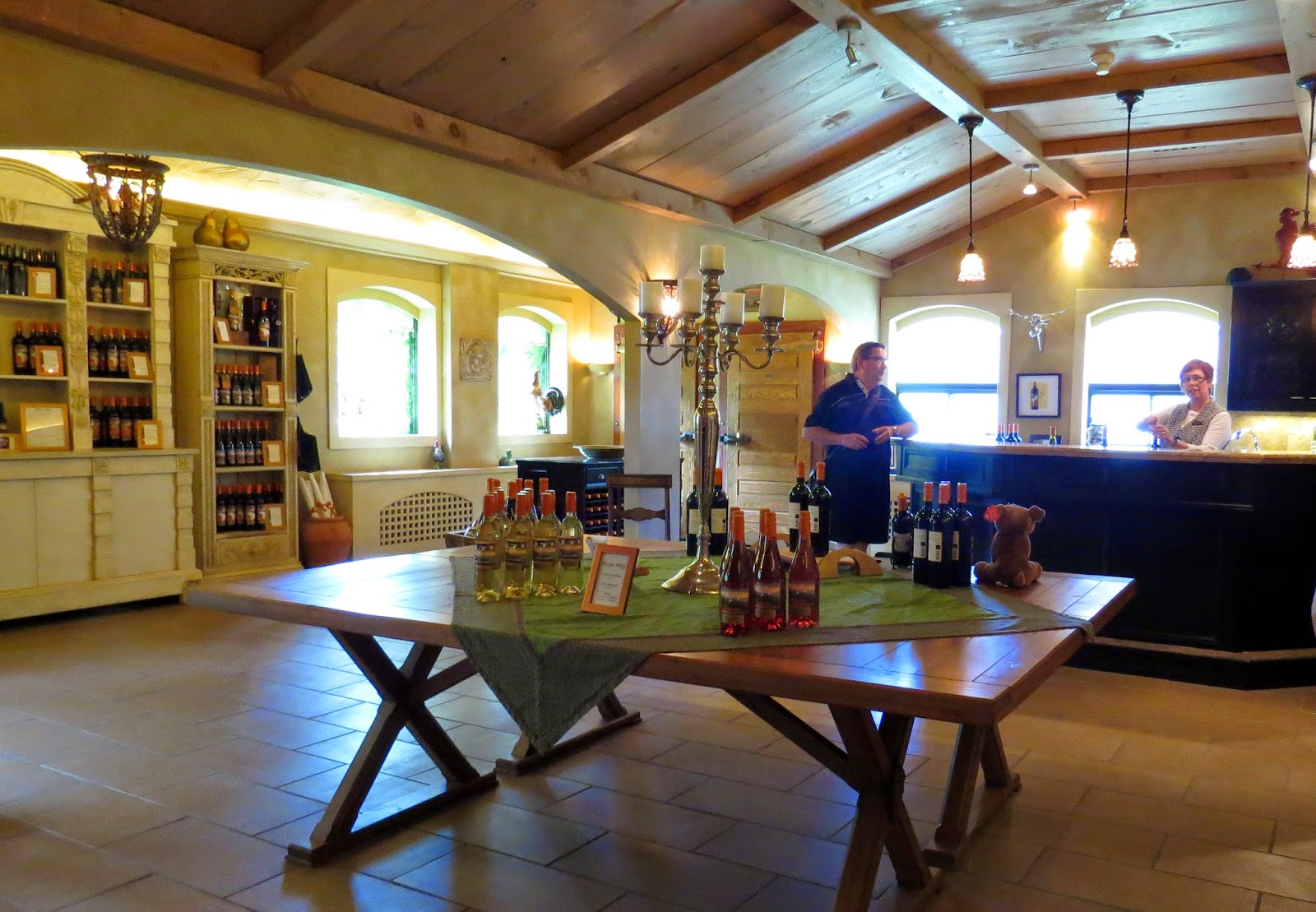 We left Foreign Affairs Winery and headed into town for lunch at Bistro Six-One Restaurant. The tour organizers have devised a system whereby each participant selects lunch from several choices before the date of tour so that the restaurant knows ahead of time, and presumably at least some preparation is made before our arrival. This plan works well except for one thing it seems to me - we don't get to eat together. It is more efficient for the kitchen to prepare all of one selection before moving on to the next. They then repeat the same process until all the choices have been served. No doubt it's efficient from the establishment's perspective but it means that everyone having burgers for example gets served first, everyone having veggie wraps receives their lunch second, and so on. This means that no table has everyone served at the same time and some people have finished their meal before friends at their table have even received their food. At our table Miriam's choice of chicken on ciabatta bread was the very last item brought out from the kitchen; we were six at the table and everyone else had completely finished and their plates had been cleaned away before Miriam had food in front of her.

After lunch we had an hour or so at leisure and Miriam and I spent most of this time in a park in this delightful town. 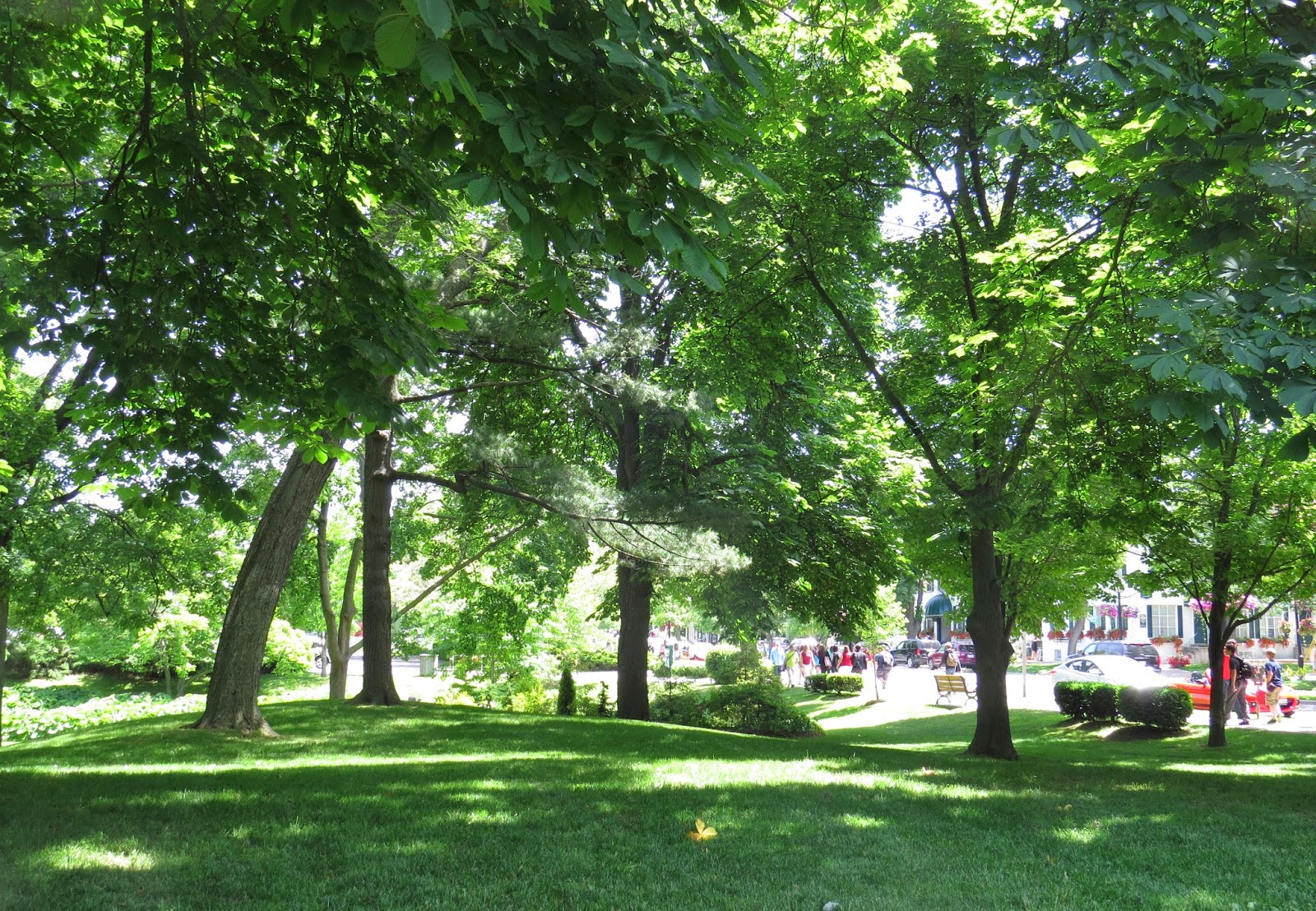 As mentioned above, birding seems to be part of our constant state of awareness, and we saw numerous species both at the park and walking back to rejoin the bus, including a stunning male Baltimore Oriole and Chimney Swifts hawking for insects in the sky above the hospital.

Back on the bus we headed to Joseph's Estate Wines, a family-owned and family-run winery since 1996. 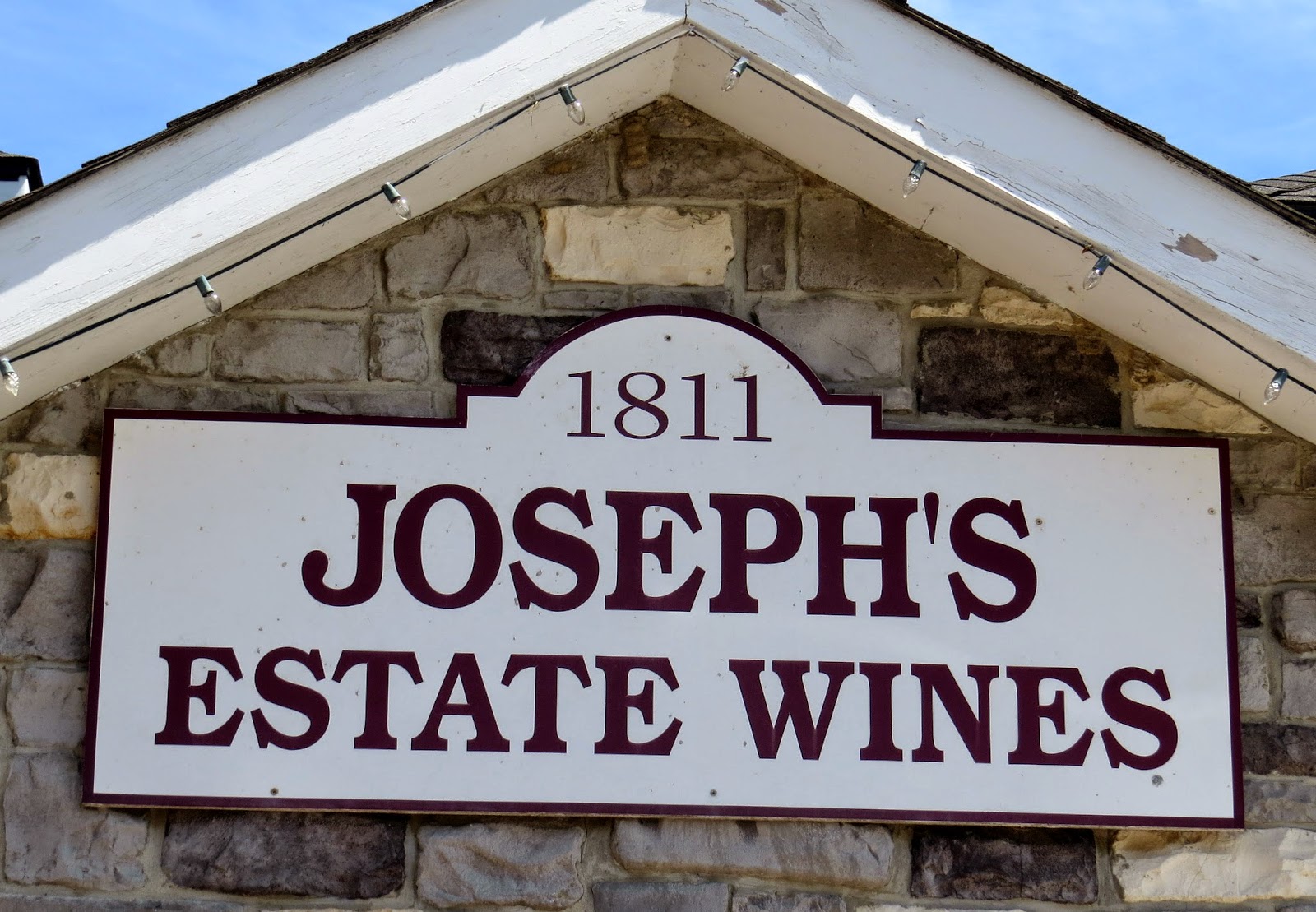 We toured the vineyard first which suffered considerable damage during the brutal winter of 2013/2104. Many vines will have to be replaced but we saw incipient grapes aplenty, giving great hope for this year's wine. 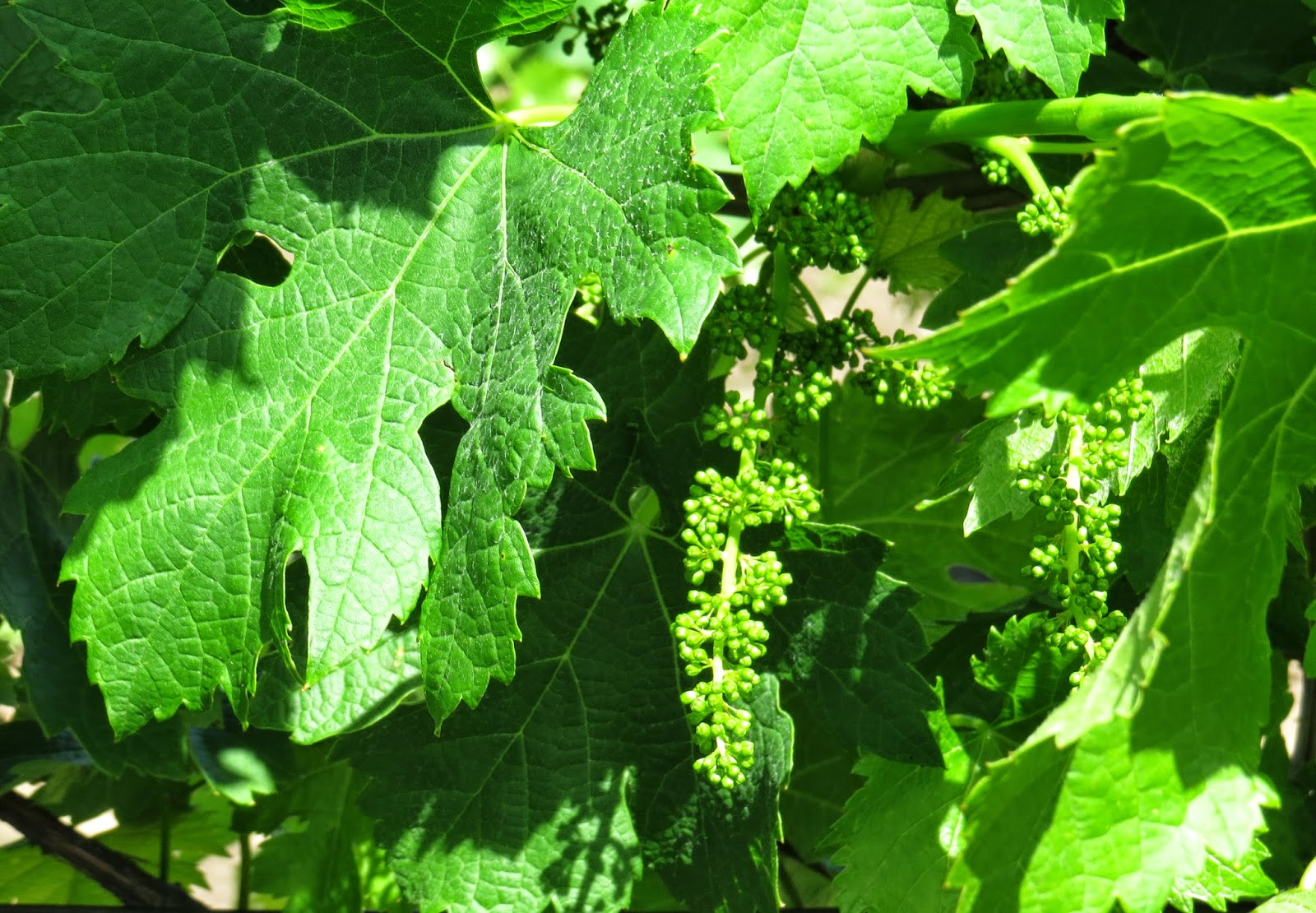 At this location we were royally entertained by Eleanor who, at eighty-two years young, is a wonderful and knowledgeable ambassador for their product. She both informed and amused us and we were all moved to make our purchases due in no small measure to Eleanor's influence. 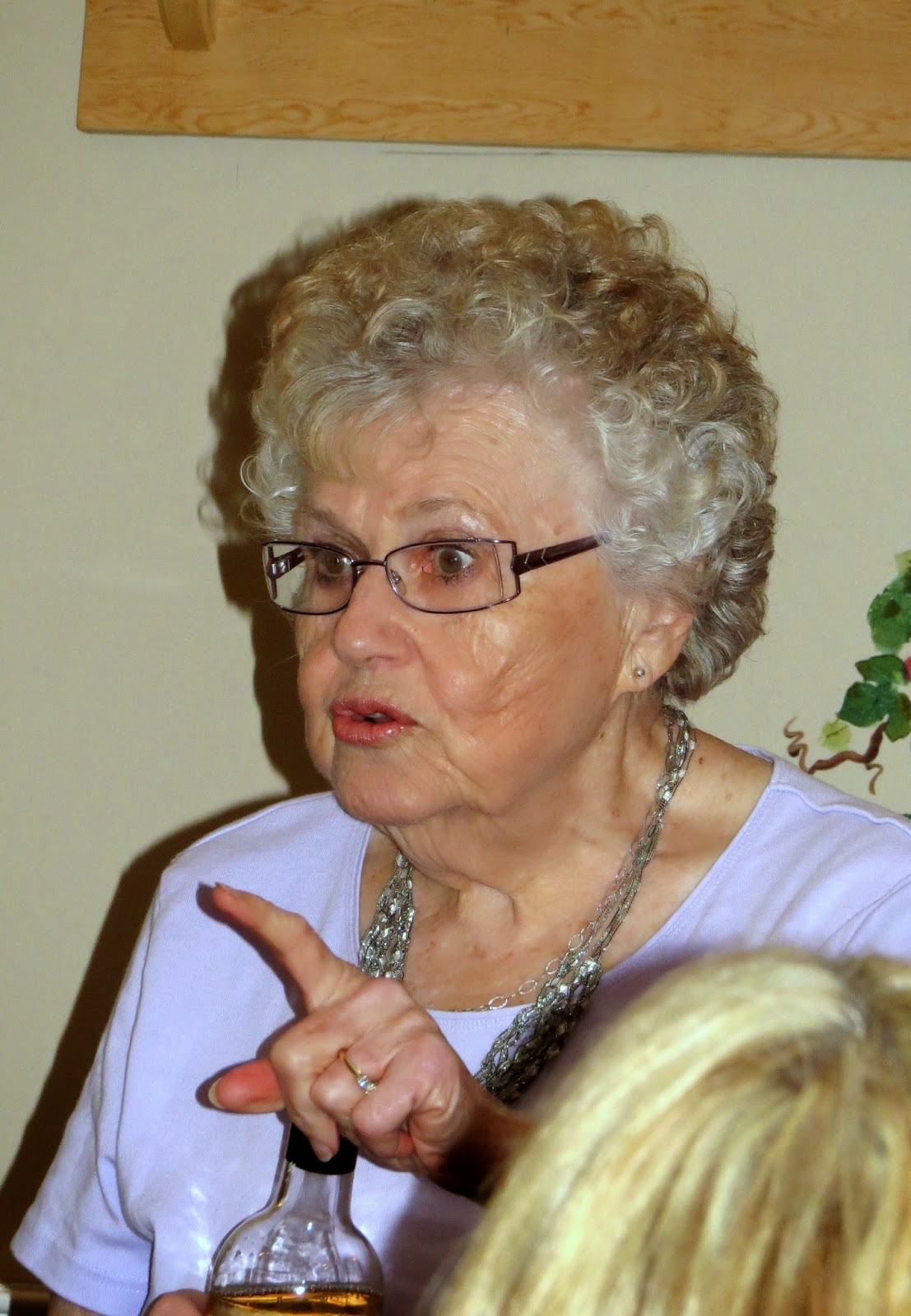 After tasting numerous wines, including that Ontario gem, Ice Wine, we headed to the store to make our selections and Eleanor was there already to help out at the counter. 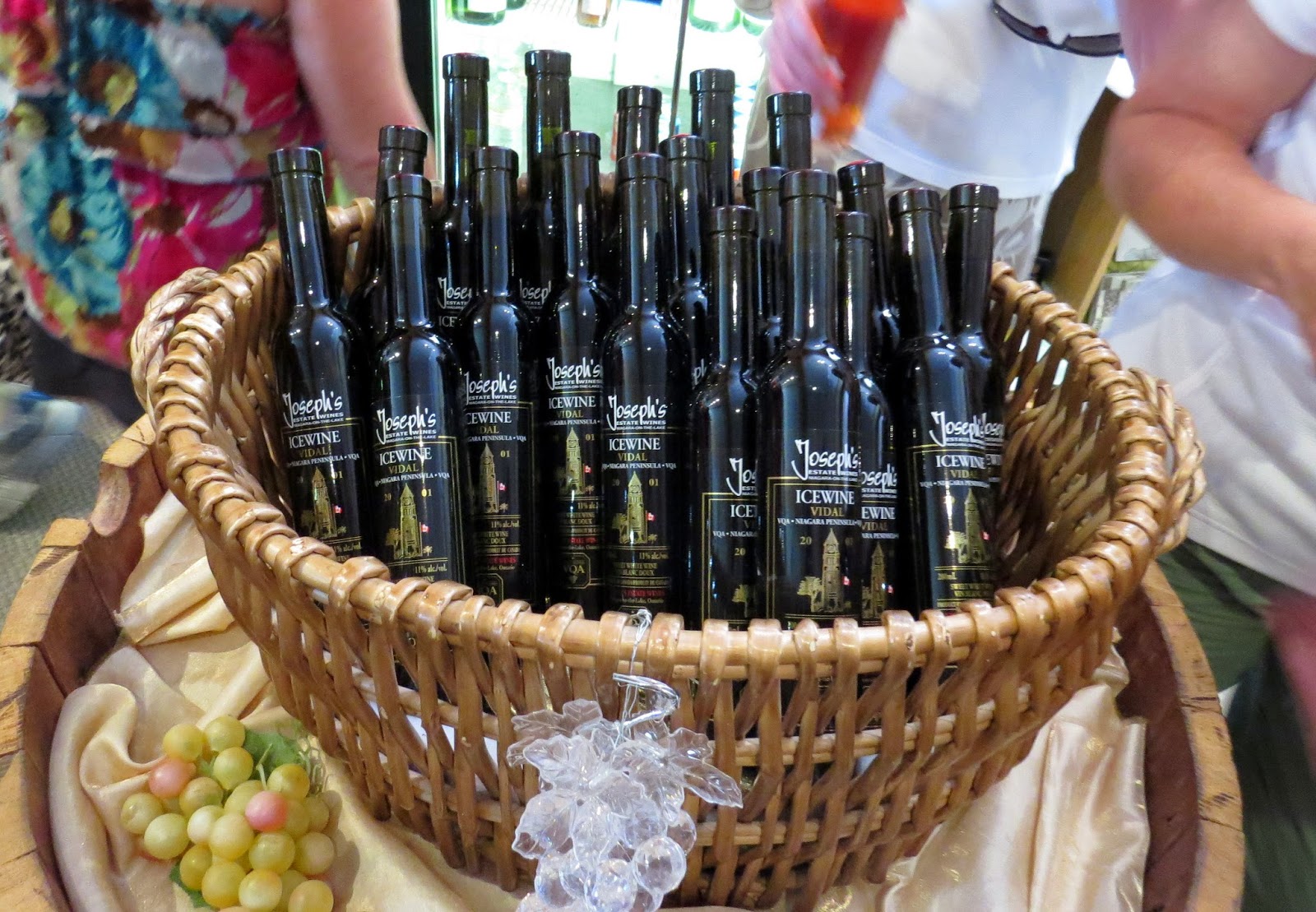 Our final destination was Diamond Estates where we toured the vineyards and the entire production facility, followed of course by a wine tasting. 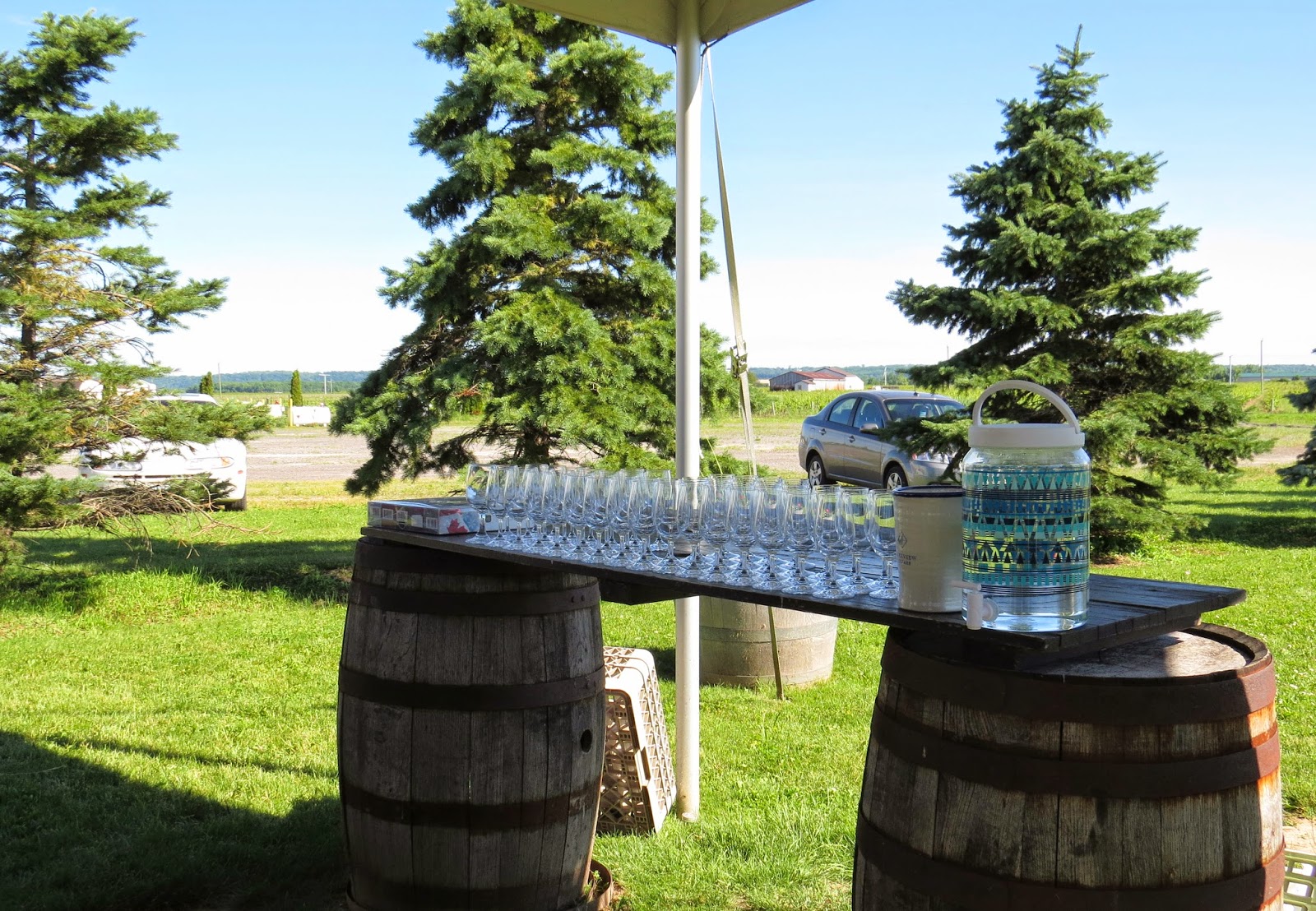 The barrel room at Diamond Estates was something to behold! 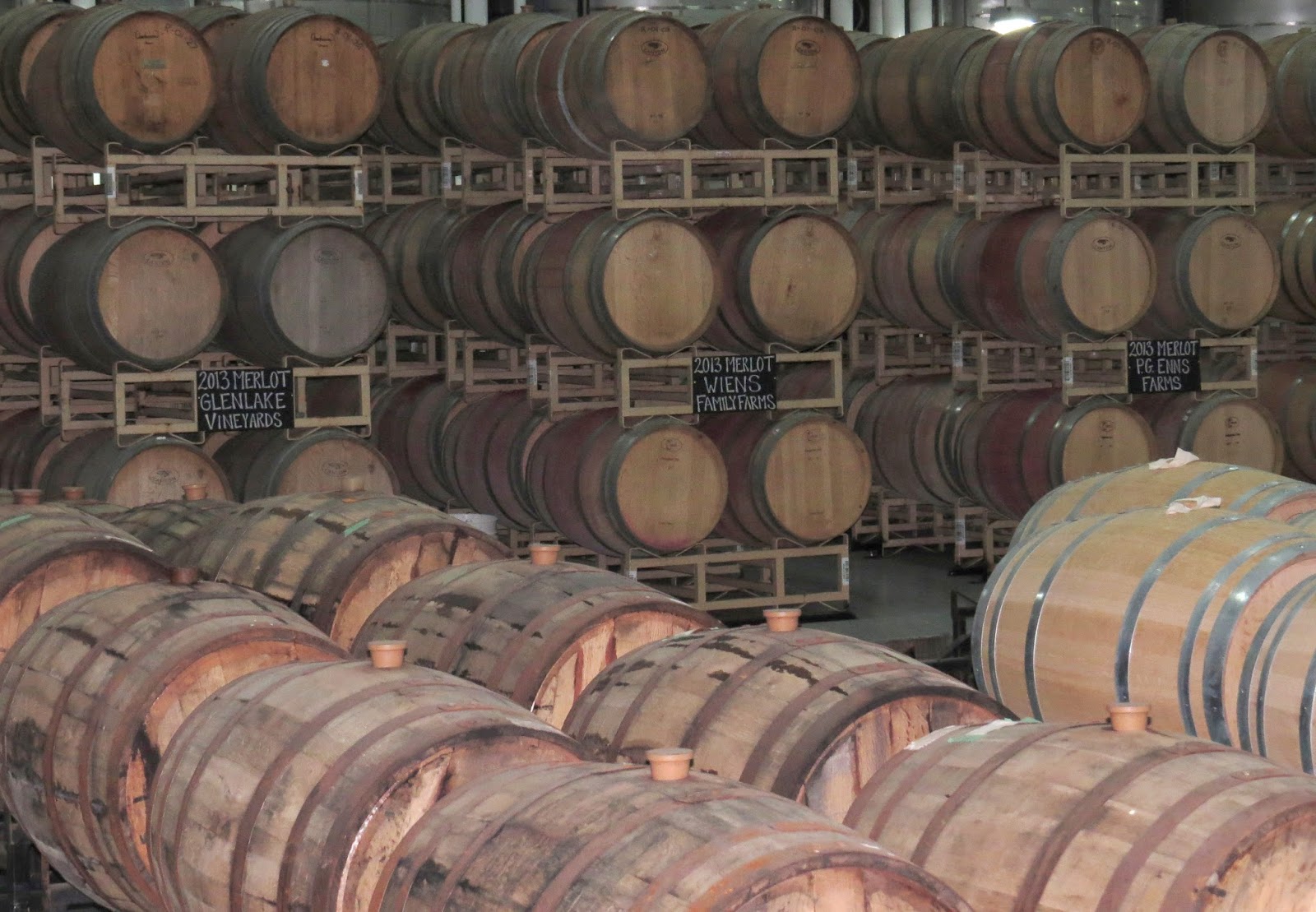 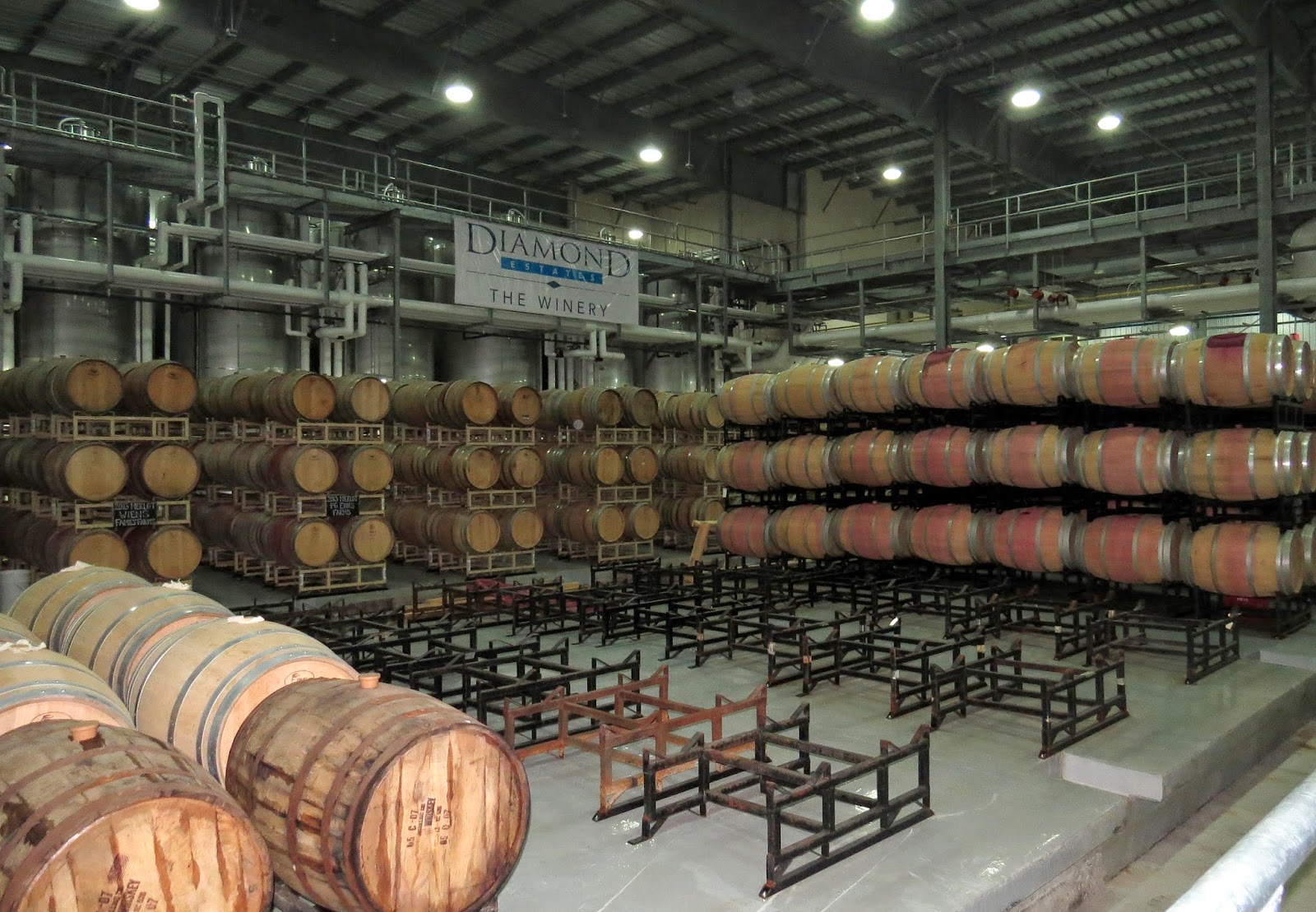 The oak barrels are sourced from three different countries - France, Hungary and the United States. There is no mistaking where this barrel originated. 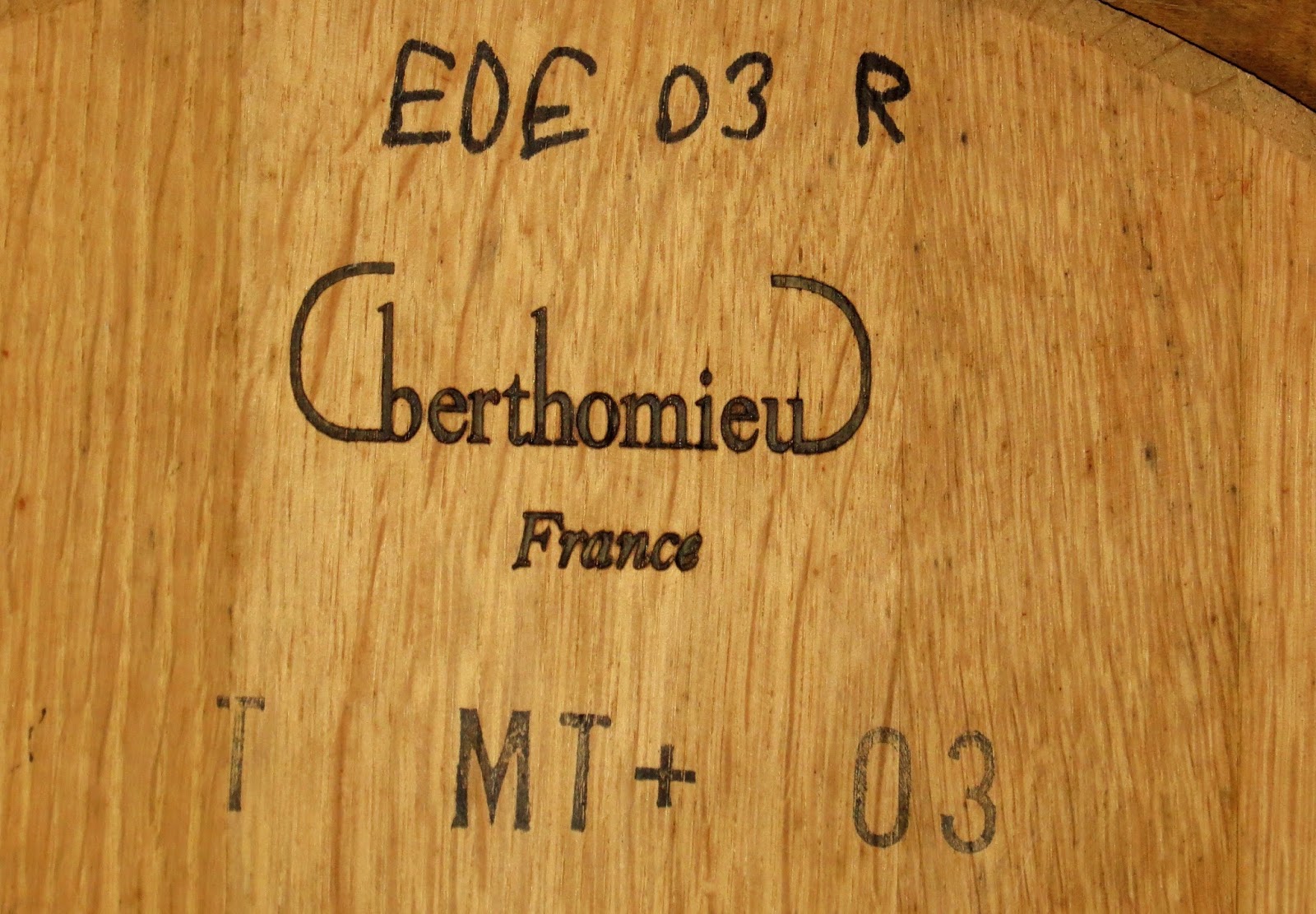 Our fine dinner was served in the barrel room, accompanied of course by red and white wine on the table. The menu was as follows: Red Wine and Shallot Braised Beef, Chicken with Mushroom Sauce, Field Greens with Dried Cranberries, Tuscan Bean Medley, Hearts of Romaine Cesar Salad, Chef's Potato Selection, Ontario Asparagus and, for dessert, Panna Cotta with Berry Coulis. It was all delicious!
Following dinner, we boarded the bus to continue our journey back to Waterloo. It was an uneventful drive and the bus disgorged a bevy of happy wine afficionados into the parking lot to retrieve their cars and return home. As we sip our wine over the weeks to come I have no doubt that we will all have happy memories of a day well spent in the enjoyment of one of life's greatest pleasures.
Posted by David M. Gascoigne, at 21:00