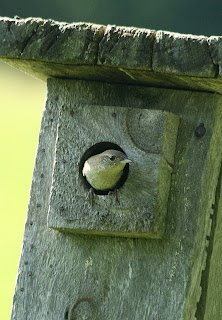 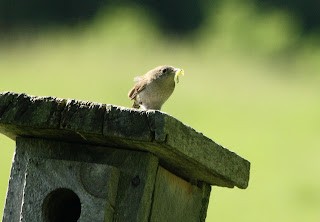 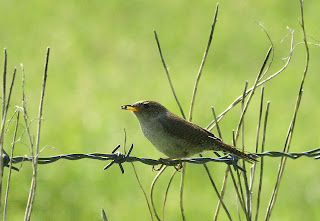 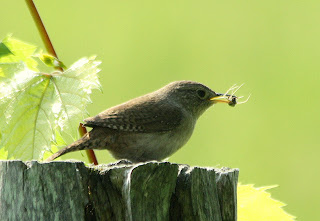 House Wren
On 19 June while birding at Schneider's Bush, Waterloo, ON we encountered two families of House Wren, Troglodytes aedon, both actively feeding young. The pictures show some of the food items delivered to the nestlings and an adult bird leaving the nest box after feeding the young. The adults were also observed removing fecal sacs but we were unable to capture that activity on film.
Posted by David M. Gascoigne, at 20:03 No comments: 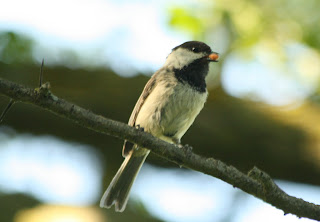 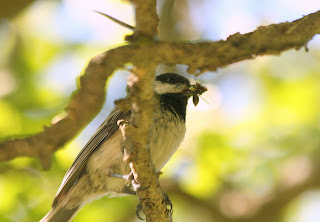 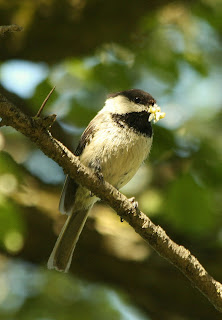 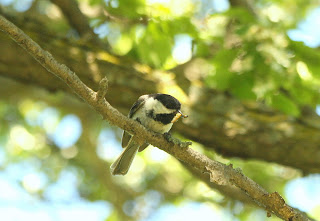 Black-capped Chickadee, Poecile atricapillus
On 5 June 2011 while walking at Columbia Lake in Waterloo, ON we observed a pair of Black-capped Chickadees actively delivering food to their nest in a cavity in a dead branch. Between the two adults food delivery was accomplished about once a minute. The pictures show the range of items delivered to the young.
Posted by David M. Gascoigne, at 07:00 1 comment: 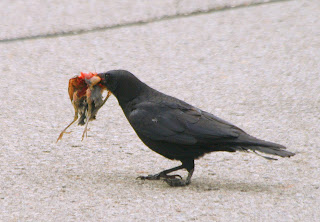 American Crow with Prey
While backing out of my driveway on 4 June 2011 I saw this American Crow, Corvus brachyrynchos, vigorously feeding on "something." As the picture reveals it is an American Robin, Turdus migratorius, which I assume the crow was somehow able to kill and it is already half eaten. Many other robins, accompanied by Common Grackles, Quiscalus quiscula, harassed the crow mercilessly and it flew across the street, carrying its meal, to the roof of the neighbour's house where it lodged the carcass into the eaves trough and continued to feed, all the while fending off aerial attacks from the other birds. Flying off again it dropped the bird in the road and when it came back to retrieve it my wife was able to get the photograph. It finally flew out of sight carrying its booty.