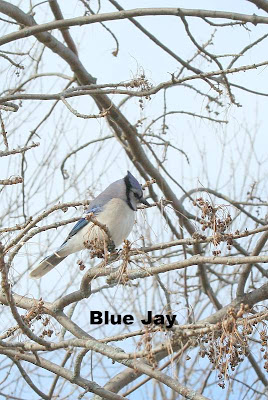 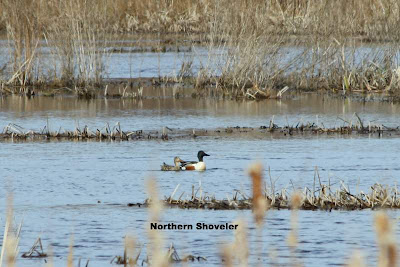 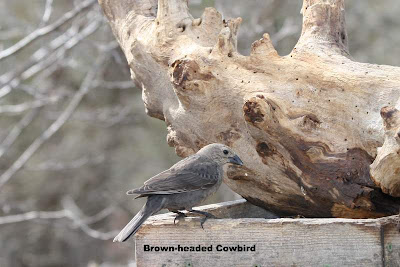 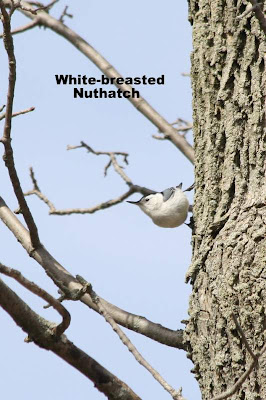 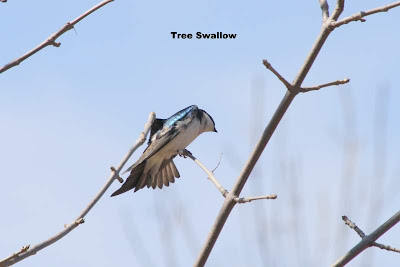 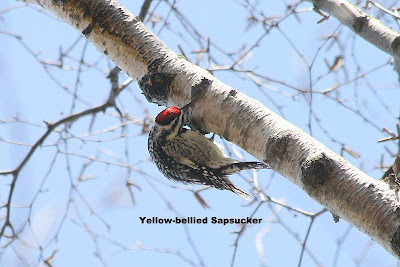 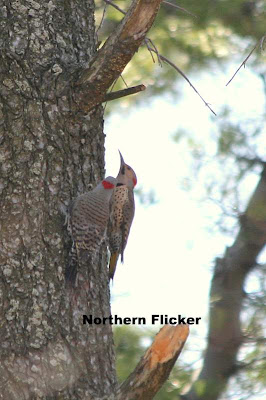 The day was cool with a keen wind when we left home at 09:37h, but it was sunny and we looked forward to a great day of early spring birding. There were Dark-eyed Juncos, American Goldfinch (now gloriously yellow), American Robins and "wine-dipped" House Finches in the yard when we departed.
Thickson's Woods, Whitby, ON
Representing the last stand of white pine which formerly graced the entire north shore, Thickson’s Woods represents a migrant trap which at times can serve up spectacular birding. A meadow of about 4 hectares is located immediately to the north, providing a buffer between the woods and the industrial development just beyond. Corbett Creek also abuts the woods and contains typical marshland birds and a variety of waterfowl.
Immediately upon entering the woods we were greeted by a splendid chorus of Red-winged Blackbirds, Northern Flickers, Common Grackles and other species. We quickly located both Ruby-crowned and Golden-crowned Kinglets and a couple of Yellow-bellied Sapsuckers. It was enjoyable to watch four Brown Creepers work their way methodically up a tree and move over to the next one. On one trunk a couple were jousting with each other. We saw our first Yellow-rumped warbler of the year and two wonderfully rufous Fox Sparrows.
Looking out over Lake Ontario, there were many ducks, but without benefit of a scope (which was in the car!) Many of them went unidentified. However, we were able to identify Bufflehead and several Bonaparte’s Gulls flew in to rest on the water.
In the meadow many Tree Swallows were present along with American Goldfinch and a couple of Blue Jays. We also saw a single Song Sparrow and our first White-throated Sparrow of the spring.
Second Marsh, Oshawa, ON
Second Marsh is known for its Little Gulls and this was our target bird of the day. Alas, none were to be found despite about twenty of them being reported the previous day. There was not even a Bonaparte’s Gull to be seen. Two Caspian terns entertained us and were having great success in catching fish. There was a nice variety of waterfowl and about twenty Double-crested Cormorants.
Whitby Harbour, Whitby, ON
Bird life was sparse, but the parking lot was full and there were many people taking advantage of a fine spring day. We did see seven Caspian Terns and a single Double-crested Cormorant. As always Mute Swans were present in the harbour and out into Lake Ontario.
Cranberry Marsh, Whitby, ON
This marsh has had its ups and downs over the years, but now under the stewardship of the Central Lake Ontario Conservation Authority(CLOACA) its future seems assured. It has also been joined up with the waterfront Trail and represents a great birding area. In the fall the Greater Toronto Raptor Watch monitors hawk migration from the south platform on Hall’s Road. I had the great pleasure of being part of the group that formed this organisation at a meeting in my family room about 15 years ago, and I was pleased to serve as its first President.
We saw a pair of spectacular Northern Harriers in the field on the west side of Hall’s Road and a superb selection of waterfowl out on the marsh, including a small flock of Ruddy Ducks. There were numerous Ring-necked Ducks and a lone male Green-winged Teal was our only sighting of that species for the day.
General Comment
Despite our disappointment in not locating Little Gull, which would have been a lifer for Miriam and our brother-in-law John Lichty who had joined us for the day, we had a really enjoyable day together and really got into the spirit of spring migration, surely the most wonderful time of year in any birder’s calendar - in the northern hemisphere anyway!
All species
Double-crested Cormorant
Great Blue Heron
Canada Goose
Mute Swan
Gadwall
American Wigeon
Mallard
Northern Shoveler
Green-winged Teal
Ring-necked Duck
Greater Scaup
Lesser Scaup
Bufflehead
Common Merganser
Turkey Vulture
Northern Harrier
Red-tailed Hawk
American Coot
Ring-billed Gull
Caspian Tern
Common Pigeon
Mourning Dove
Yellow-bellied Sapsucker
Downy Woodpecker
Northern Flicker
Tree Swallow
Golden-crowned Kinglet
Ruby-crowned Kinglet
American Robin
Black-capped Chickadee
White-breasted Nuthatch
Brown Creeper
Blue Jay
American Crow
European Starling
House Sparrow
House Finch
Pine Siskin
American Goldfinch
Yellow-rumped Warbler
Fox Sparrow
Song Sparrow
White-throated Sparrow
Dark-eyed Junco
Northern Cardinal
Red-winged Blackbird
Common Grackle
Brown-headed Cowbird
Posted by David M. Gascoigne, at 20:52 No comments: