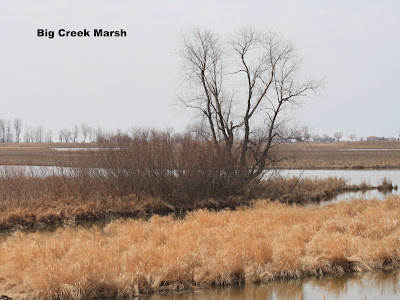 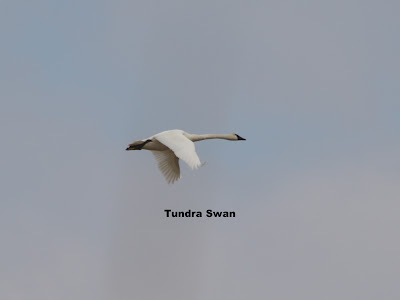 Birding the North Shore of Lake Erie
from Port Dover to Long Point
March 22, 2009
We left home at 07:40h under cloudy skies, with the temperature around 2 degrees C. A couple of American Robins were picking their way across the front yard as we left.
The drive down was uneventful and we saw a predictable variety of species. We heard our first Killdeer of the spring and a single Wild Turkey flew across the road in front of us.
Port Dover
We arrived in the picturesque little port at 09:08h, well ahead of our scheduled 10:00h meeting time with Steve and Wendy.
Birding along the wharf we observed quite a mixture of waterfowl, the highlights being courting Red-breasted Mergansers and a few lingering Long-tailed Ducks in freshly-moulted plumage; so stunningly beautiful and distinctive.
Steve and Wendy arrived at the Tim Horton’s a little before 10:00h and we returned to the wharf to scope the waterfowl we had already encountered.
Soon we were on our way to Port Ryerse.
Port Ryerse
This is another of those delightful little settlements which are dotted along the north shore of Lake Erie.
As soon as we got out of the car, the fact of being in the Carolinian Zone of south western Ontario was imprinted on us. We heard the song of both Carolina Wren and Red-bellied Woodpecker. We were unable to locate the Carolina Wren visually as it quickly stopped singing, but we had stellar looks at a wonderful male Red-bellied Woodpecker which obligingly stayed on the same branch for an extended period. We also heard our first Song Sparrow of the spring.
Turkey Point Lookout
We stopped for a while and chatted to a local resident, an old timer (probably little older than I am!) who has lived just along the road from the lookout all his life. He was pointing out the changes that have occurred in the marshes over the years, and it was interesting chatting to him.
Two Sandhill Cranes flew directly over our heads.
Long Point - Big Creek
Without doubt, one of the highlights of a visit to Long Point, the observation platform was filled to capacity when we arrived. Careful scoping netted many species including numerous Tundra Swans, many Ring-necked Ducks and a whole variety of other waterfowl, including our only American Black Duck of the day, a lone male.
A particular delight was being able to help a family with three young children identify species and point out the characters they needed to know to learn them. We also were able to impart some general knowledge about birds and answer all the questions they had.
The entire family was "getting into" birds but one of the daughters was especially passionate. In the wonderful disarming way of children, she stated that she hadn’t decided whether she would have a career in Polar Bears, tigers or birds - but she loves them all! We ventured the opinion that birds might be a little more accessible! Actually we ran into the same family again at Old Cut and were able to help them with passerines also.
The parents expressed their appreciation and the father stated that he thinks his bird knowledge tripled that day, and made him anxious to learn more. It’s always humbling and immensely pleasurable to share birds with others and I think we served our community well today.
We walked along the dikes and added American Tree Sparrow and a couple of singing Song Sparrows.

Long Point - Old Cut
Old Cut was very quiet today, but it was a good place to find a picnic table and eat lunch.
There had been reports of Golden-crowned Kinglets, but we were unable to find any.
We spent our time to good advantage with our budding birding family. It’s amazingly rewarding to discuss Black-capped Chickadees and Common Grackles with people totally unfamiliar with anatomy, breeding biology etc. How fascinated they were to hear about the hyoid apparatus in a woodpecker! There is not the slightest doubt that this family will be in their local library in short order!
Long Point - Hastings Drive
This wild, windswept coastal road is battered by the full force of Lake Erie storms and the shoreline seems to change at every visit. The end of the road affords a wonderful view of Big Creek Marsh. We were royally entertained by an immature Bald Eagle buzzing the ducks on the water, no doubt seeking an injured bird which would be easy prey. Several Killdeer were on the beach. There were substantial numbers of Redhead and Canvasback, more Sandhill Cranes and three Northern Pintails, in addition to a delectable array of other species. It seemed as though a male Red-winged Blackbird called from every stalk.
Long Point Causeway
On the way out to Lee Brown Waterfowl Area we saw a male Common Pheasant at the side of the road.
Long Point - Lee Brown Waterfowl Area
The last few times we have visited Lee Brown it has been decidedly devoid of birds, other than Canada Geese and Mallards. Today made up for it. Just before arriving we saw a female Northern Harrier coursing across the fields and at Lee Brown proper there were Green-winged Teal, American Wigeon, Gadwall, a lone Trumpeter Swan and other waterfowl.
End of the day
We all returned to Port Dover to buy some Lake Erie perch. So we ended the day exactly where we had begun. Steve and Wendy left for Toronto and we enjoyed our drive home to Waterloo, We checked for Eastern Bluebirds in every likely spot, but were unable to locate any.
It had been a great day’s birding. Steve and Wendy always add a whole dimension of pleasure to any outing.
All species
Great Blue Heron
Canada Goose
Mute Swan
Trumpeter Swan
Tundra Swan
Gadwall
American Wigeon
American Black Duck
Mallard
Northern Pintail
Green-winged Teal
Canvasback
Redhead
Ring-necked Duck
Scaup sp.
Long-tailed Duck
Bufflehead
Common Goldeneye
Common Merganser
Red-breasted Merganser
Turkey Vulture
Bald Eagle
Northern Harrier
Red-tailed Hawk
Wild Turkey
Common Pheasant
American Coot
Sandhill Crane
Killdeer
Ring-billed Gull
American Herring Gull
Common Pigeon
Mourning Dove
Red-headed Woodpecker
Downy Woodpecker
Carolina Wren (heard)
American Robin
Black-capped Chickadee
Blue Jay
American Crow
European Starling
House Sparrow
House Finch
American Goldfinch
American Tree Sparrow
Song Sparrow
Dark-eyed Junco
Northern Cardinal
Red-winged Blackbird
Common Grackle
Posted by David M. Gascoigne, at 18:36 No comments:

On a beautiful morning, with spring in the air, we left for Long Point at 09:10h. We checked the feeders before leaving and saw a lone Pine Siskin, with Canada Geese honking overhead.
There was no shortage of birds on the drive down and especially pleasing were the large numbers of American Robin, Common Grackle and Red-winged Blackbird, all recent arrivals in our area. On getting close to the north shore of Lake Erie we saw our first skein of Tundra Swans. The arrival of these birds from their southern wintering grounds is always one of the great highlights of spring in southern Ontario and these early numbers presage the main cohort which should arrive in the next week or so.
We checked the pond at Bird Studies Canada which is still partly iced over but did contain a large aggregation of American Herring and Ring-billed Gulls.
By checking various points in Long Point Bay and panning the area from the Big Creek lookout we saw an astounding variety of waterfowl, including many more Tundra Swans and a small flock of Snow Geese. A juvenile Bald Eagle was cruising above the marsh and entertained us royally. Sandhill Cranes had been sighted earlier, but as much as we searched for the rest of the day, we were unable to locate them, and found no one else who had been successful either.
At Old Cut, where in a few weeks warblers will be much in evidence, we found a Brown Creeper, three Downy Woodpeckers, a Red-breasted Nuthatch, a lone American Tree Sparrow, ubiquitous Black-capped Chickadees and other common species.
It was a very pleasant day of birding in warm spring sunshine. We’ll go back again next week to check on the further arrival of Tundra Swans and to see what other species have arrived.