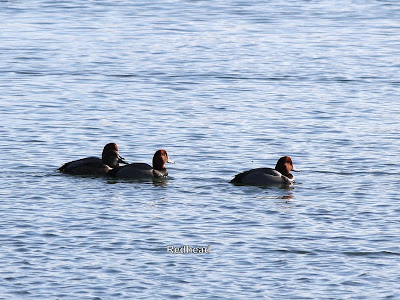 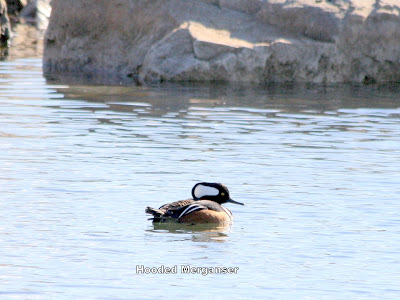 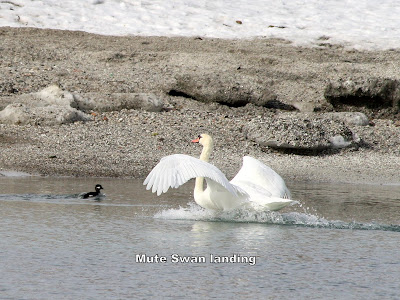 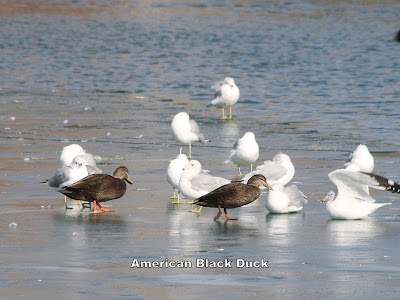 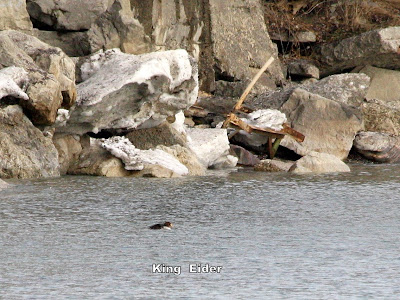 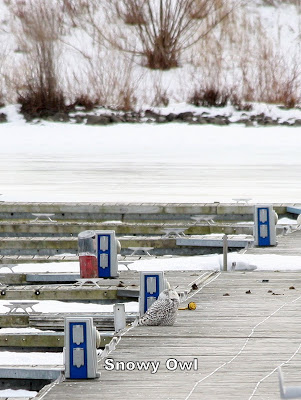 It was a delightful day to be out and about. The temperature was 0 degrees C when we left home at 09:05h and the sun was already breaking through. As we drove into Toronto the cloud dissipated even more and it turned out to be a fine mid-winter day, perfect for birding.

This location is always good for birding at any time of the year and is easily reached in less than a half hour from Toronto International Airport. It consists of two arms jutting out into Lake Ontario, called appropriately Humber Bay Park East and Humber Bay Park West, but it is really part of the same spit of land.
Immediately upon arrival we noted a great deal of activity on the water and were delighted to observe a pair of Hooded Mergansers close in to shore. There are many handsome waterfowl in the world, but surely this species must rank in the top echelon. There was also a dozen or so Redheads in addition to the Greater Scaup, Bufflehead and Common Goldeneye one might expect to encounter. Further out on Lake Ontario there were great rafts of ducks including hundreds of Long-tailed Ducks, a single male Common Merganser and several pairs of Red-breasted Mergansers. There were numerous Mute and Trumpeter Swans and at Humber Bay Park West two American Herring Gulls, eight American Black Ducks and a single Gadwall, in addition to the other species already seen at Humber Bay Park East. Ring-billed Gulls were everywhere - in the sky, on the water, on the land.

Over the years many rarities have been located at this site and today was no exception. We had great looks at a first year male King Eider, albeit a little farther out than we would have liked. All of the bay ducks were feeding actively on what I assume are Zebra mussels and the eider was certainly claiming its share of the bounty. Many other ducks and gulls were present, but the second highlight of the day, just before leaving to head for home was a juvenile/female Snowy Owl perched on one of the docks at the marina. This cooperative bird stayed there for the twenty to thirty minutes we were there and was still in the same position when we left. 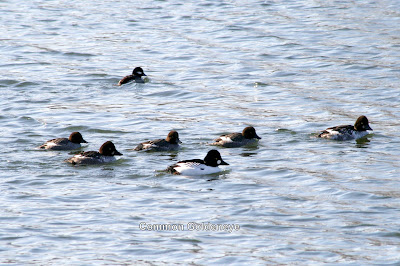 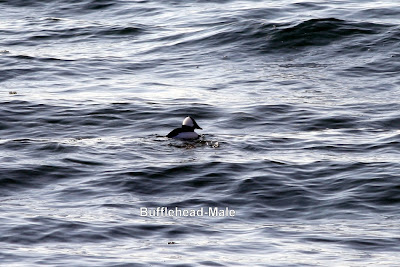 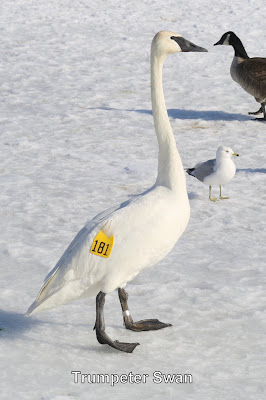 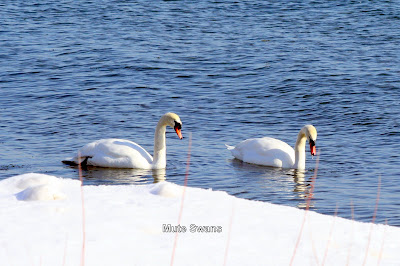 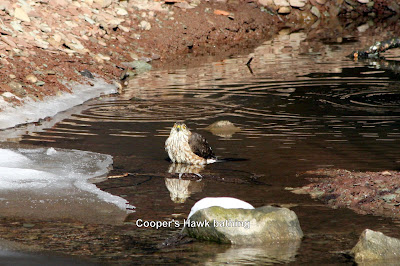 Winter Birding at the North Shore of
Lake Ontario, from Oakville to Burlington
February 1, 2009

It was a beautiful mid-winter day, sunny with no wind - a welcome relief from the bitter temperatures of late - and we decided to spend it birding along the north shore of Lake Ontario.
Before departing we checked the feeders at home and they were well patronized by the usual triumvirate of American Goldfinch, Common Redpoll and Pine Siskin.
We left home at 09:15h with a temperature of 2 degrees C with snow already melting under the bright sunlight. En route we added American Crow, Common Pigeon, Mourning Dove, Blue Jay, European Starling and House Sparrow.

This was our first stop, where Long-tailed Duck is usually a certainty at this time of the year, but today was the exception. In fact there were very few birds at all. Greater Scaup, Bufflehead, Common Goldeneye, five Red-breasted Mergansers and a few Ring-billed Gulls were all that we saw. The mouth of the river that spills into Lake Ontario at that point was totally frozen which perhaps explains the dearth of Canada Goose and Mallard.

Always a pleasant stop, with warm indoor washrooms (!), this was our next destination. Almost immediately on entering the property a male Northern Cardinal was calling, situated in a cedar tree against a clear blue sky.
We walked down to the lake where we were greeted by large flocks of Canada Goose and Mallard, with about ten American Black Ducks interspersed among them. On the water was a single Greater Scaup, and Common Goldeneye and Bufflehead were common. Numerous Ring-billed Gulls wheeled in the sky, although there were no Herring Gulls or Great Black-backed Gulls, much to our surprise. In fact the only gull species we saw all day was ring-billed. Walking back through the woods we saw four more male Northern Cardinals, a single Black-capped Chickadee and heard a White-breasted Nuthatch.
The highlight of this location was a Cooper’s Hawk bathing in the icy water. The back part of the bird was totally immersed and it was vigourously thrusting its upper parts into the water and tossing water over its back. After several minutes of this behaviour it flew up onto a low overhanging branch and started to shake the water from its feathers. Unless my memory is flawed, this is the first time I have seen a raptor bathing in this fashion.

The harbour where Red-necked Grebes have nested for the past several years was completely frozen over, but there was open water at the mouth of Bronte Creek where it spills into Lake Ontario. There were abundant Canada Geese, Bufflehead, Common Goldeneye, Greater Scaup and a single Mute Swan. Ring-billed Gulls were common and we saw two European Starling.

We had not initially planned to stop here but we saw huge rafts of ducks out on the water so decided it was worthwhile checking. There were literally thousands of birds on the water, chief among them abundant Long-tailed Duck, Common Goldeneye, Bufflehead and Greater Scaup. There were also many Canada Goose, Ring-billed Gull and three Mute Swans. Our second Cooper’s Hawk of the day was perched high atop a tree.

Under conditions of open water, this location is a waterfowl magnet. Today it was frozen, but there were interesting birds nonetheless. Perhaps the greatest delight was a gathering of more than thirty Trumpeter Swans, most with large yellow wing tags. What a fitting tribute to Harry Lumsden who almost single-handedly brought about the reintroduction of this magnificent species to Ontario, extirpated by over-hunting in the early years of the twentieth century. There were about ten Mute Swans, together with abundant Canada Goose and Mallard, ten or so American Black Duck, many Ring-billed Gulls and along the paths Black-capped Chickadee, House Sparrow, European Starling and Northern Cardinal.
Many people bring food for the waterfowl which pass the winter here, despite admonitions from the town not to do so. It was encouraging to see kind-hearted citizens toting pails of corn and other grains, instead of the normal fare of stale bread and donuts one is accustomed to seeing. Others brought sunflower seed for the chickadees; one dear soul had peanuts for the squirrels.

We left at 14:25h and were home by 15.20h, the temperature having climbed to 4 degrees C. En route we saw our only Red-tailed Hawk of the day.

As already mentioned we were surprised not to find a single gull other than the prolific Ring-billed Gulls and despite careful scanning with the scope no scoters at all. It was, however, delightful to be out on such a fine winter’s day. Many others had the same notion and it was gratifying to enjoy the spectacle of many young parents enjoying the outdoors with their children. Thank the Lord not everyone is addicted to the Super Bowl!