Even though the weather forecast was not entirely promising, we decided to head for Rondeau to enjoy what might be the final weekend of warbler migration.
It was raining slightly when we left and the rain got progressively heavier for about the first forty-five minutes. After that, however, the skies began to get lighter and the rain stopped and the rest of the day was quite beautiful.
There had been reports of several birds which would be lifers for Miriam, namely, Cape May Warbler, Yellow-breasted Chat, Blue-winged Warbler and Louisiana Waterthrush, the latter a lifer for me also, having been my nemesis bird for many years. As it turned out we would not see any of them!
There was a decided paucity of birds in the park and we had to work for most of what we saw. No doubt many birds have already moved north, but the cool spring with frequent rain may also have something to do with it. We have often had wonderful days at Rondeau with birds in abundance; this was not one of them. Perhaps the general, widely-noted decline in many neotropical migrants is also a factor in the low numbers of individuals.
Widespread throughout the park were Barn Swallows, Tree Swallows and Turkey Vultures. Other than that we observed birds as follows.

A couple of Chipping Sparrows were on the lawn and the feeders were fairly active with a limited number of species. There were both male and female Rose-breasted Grosbeaks, a couple of male Ruby-throated Hummingbirds and a single Red-breasted Nuthatch. Single Hairy and Downy Woodpeckers were present but there was no sign of either Red-headed or Red-bellied Woodpeckers, species we have come to expect at these feeders.
There were numerous grackles, cowbirds, a lone female House Sparrow and three American Goldfinches.

This trail was exceptionally quiet and more
than one other birder commented on the lack of birds. As far as we know no one saw the Prothonotary Warblers which are the highlight of this trail. Warblers were sparse indeed. We saw only a male American Redstart, a single Yellow Warbler, a Magnolia Warbler and a Northern Waterthrush was singing from high atop a snag. Perhaps the highlight of this trail was a Blue Jay vigorously consuming a frog.

Many of the reported birds we most wished to see had been seen on this trail earlier in the week, but like elsewhere in the park bird life was sparse and only to be found with diligent searching. A couple of Grey-cheeked Thrushes and a Nashville Warbler were the first of the year for us.
Warblers were decidedly absent and the only other species we saw were the ubiquitous Yellow Warbler, three American Redstarts, one Blackburnian Warbler, one Magnolia Warbler, and a very secretive and well-camouflaged Ovenbird. Other species observed were in small numbers and there were spells when other than Turkey Vultures overhead and Yellow Warblers all around, there was nothing else to be seen.

A Yellow-breasted Chat had been sighted very early in the morning, but had not been seen since. The same was true of an Acadian Flycatcher. We saw six House Wrens and a Carolina Wren which was delightful, but add to the above Yellow Warblers in abundance, Turkey Vultures cruising the treetops, three Grey Catbirds, a single Rose-breasted Grosbeak, several American Robins, two Northern Cardinals and a Blue Jay and that was the total of everything we saw.

The weather was beautiful while we were in the park and we ran into a couple of old friends. It is always a delight to be at Rondeau but it was certainly not vintage birding! 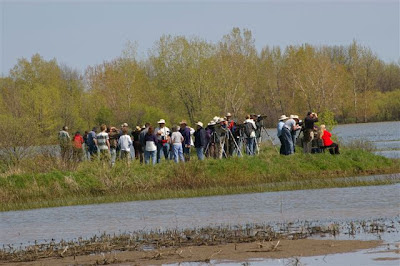 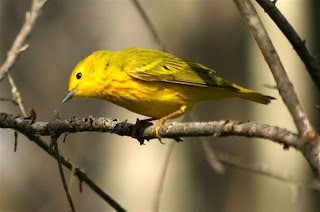 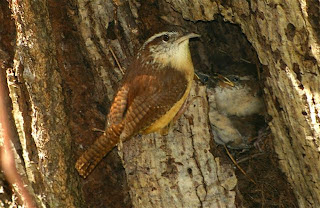 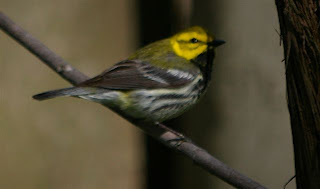