Before parting company with Rick and Marie, Marie marked up a map for us with suggested places to visit. Chief among these was Prince Edward Island National Park at Greenwich about which she rhapsodized more than a little. Initially our mind was made up to go there, but later Miriam said, "You know, it's about an hour and a half each way. Do we really want to spend three hours of a day on PEI in a car?" We mulled it over and little by little reoriented our thoughts towards the north shore around Cavendish, a mere half hour or so from Baker Shore.
That was our plan until Lynne came to chat with us at breakfast. We told her of our plans. She set us straight in a hurry! "You must go to Greenwich," she said, "It's fabulous there." She went into all the reasons we should go, including the fact that it was a lovely drive, and in short order we were convinced.
Greenwich it would be.
09 September 2021
Baker Shore - Greenwich National Park - St. Peter's Harbour - Savage Harbour - Baker Shore
Following another of Darrell's incredible breakfasts, our drive up to the park was uneventful, a little slow at times around Charlottetown, but there were no serious delays.
We arrived in great spirits buoyed by Lynne's description of all that we would see. 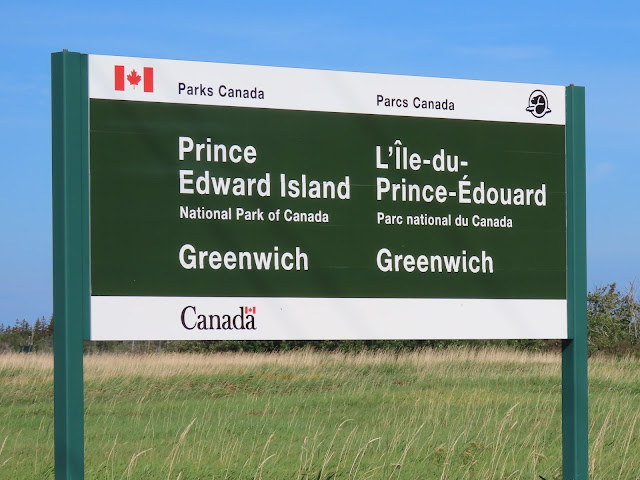 The walk to the dunes and the beach was a modest 4.6 km round trip, and we set off. The Mi'kmaq First Nation has a long history with this area, and a reconstruction of a typical encampment has been established, the tepee having been constructed in the traditional manner. 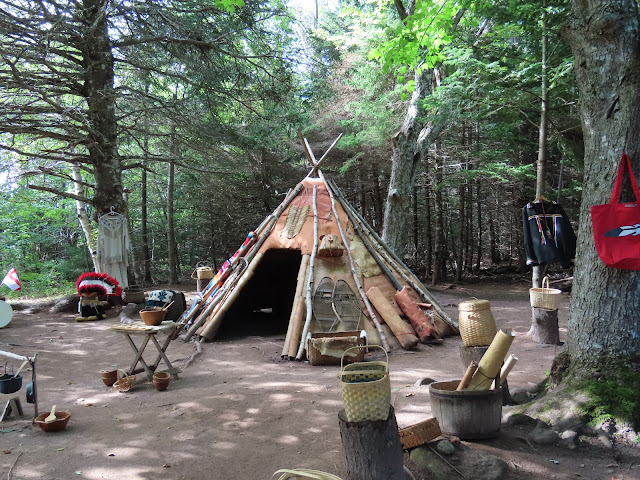 One is invited to explore the rich heritage of these original custodians of the land. 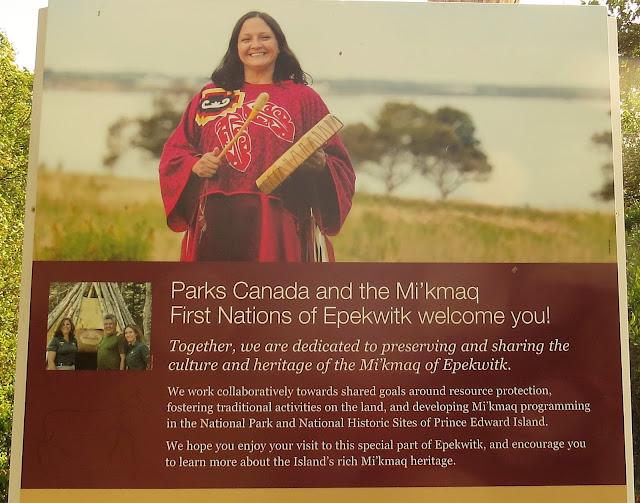 Initially we traversed a forested area and were soon at a large marsh that is crossed by means of a floating boardwalk. 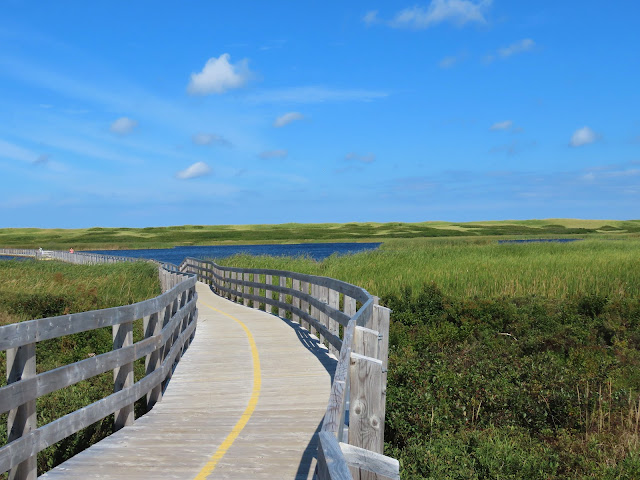 I had visions of the bird life during the breeding season and could only salivate at the number of interesting species that could be found there with the investment of a few hours. 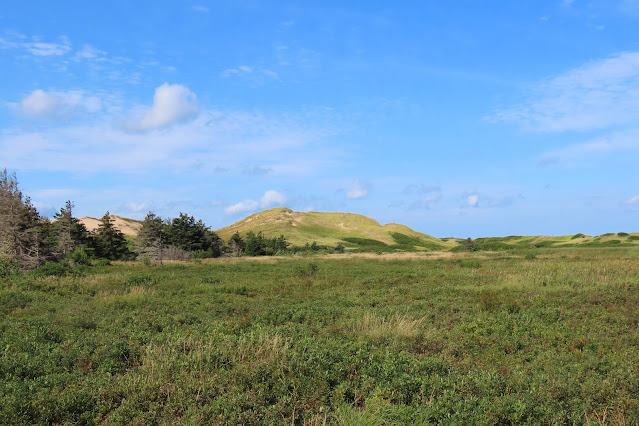 There was both wet, boggy habitat and an expanse of open water. 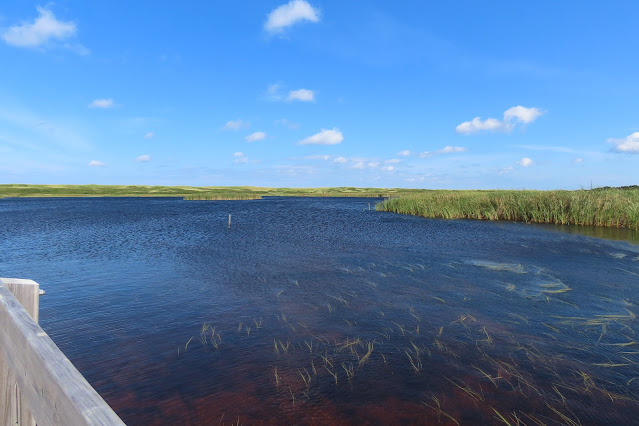 Lynne had been very enthusiastic about the range of ecosystems we would encounter and now we understood why. Miriam and I were already ecstatic about this wonderful place. 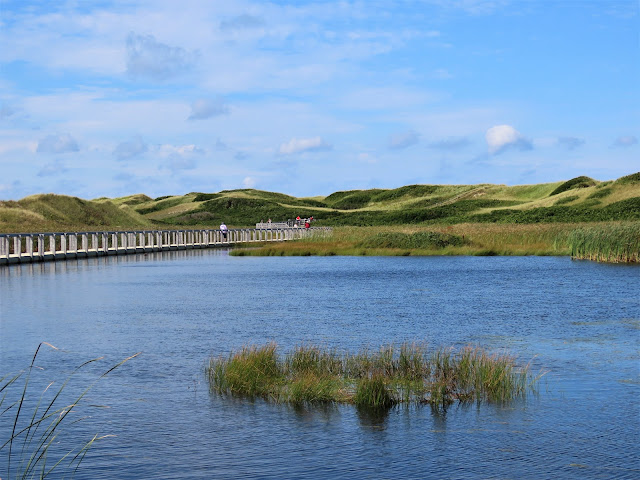 The dunes were in sight. 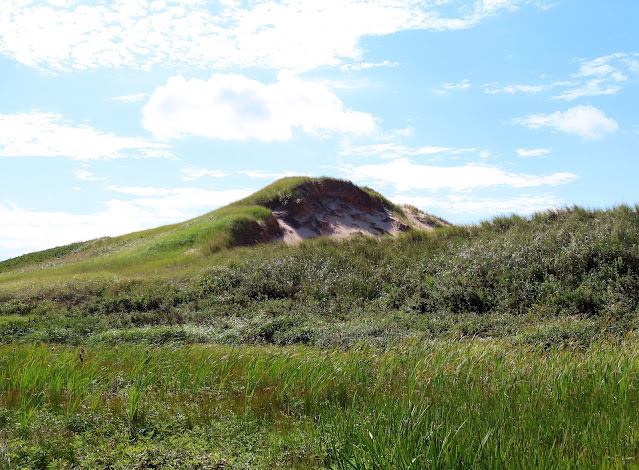 Every so often we would look back to see where we had come from. 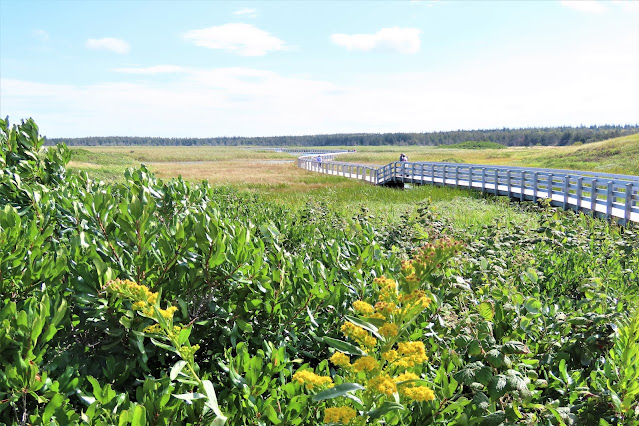 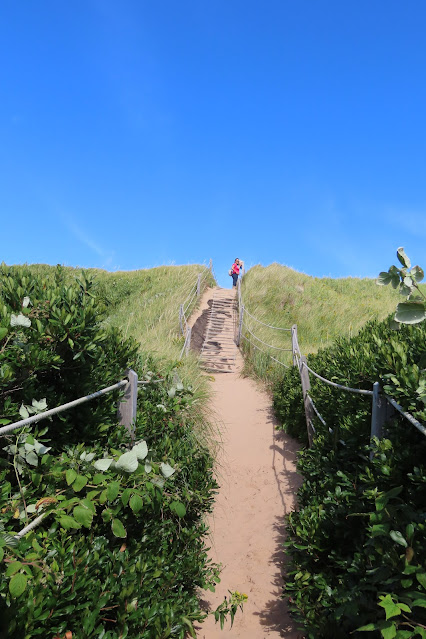 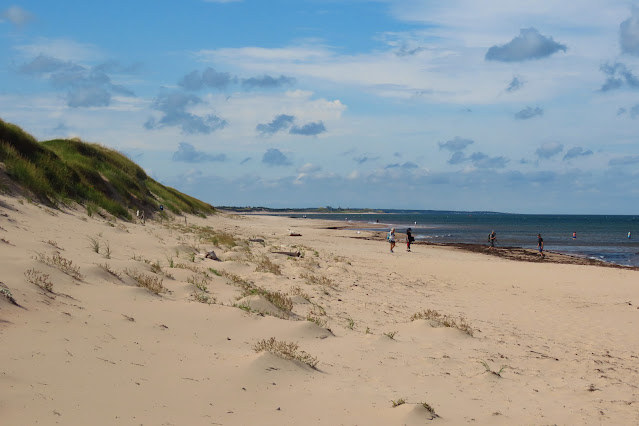 It was utterly wonderful and sparsely occupied by people. Perhaps some, unaccustomed to walking, elected not to do the whole route.
One of our most exciting bird sightings of our entire trip took place as a single Northern Gannet (Sula bassanus) cruised along the inshore waters, close to the beach. I am sure that most gannets have already departed for the open ocean and this was a straggler on its way to join them. It's a spectacular bird to see.
We walked along the beach, entranced, by everything - the dunes, the coastal vegetation, the sand, the ebb and flow of the water - and shorebirds!
By my best estimate there were about twenty Sanderlings (Calidris alba). 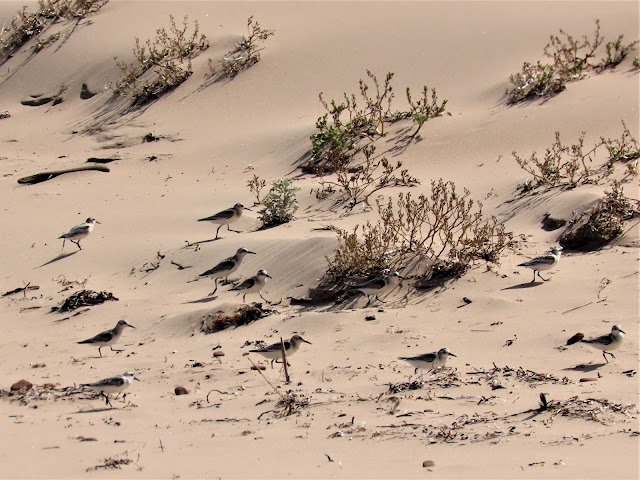 In fact there may have been more because they scurried along, took brief flights, the flock split, some landed close by, others farther up the beach, and they were hard to count. 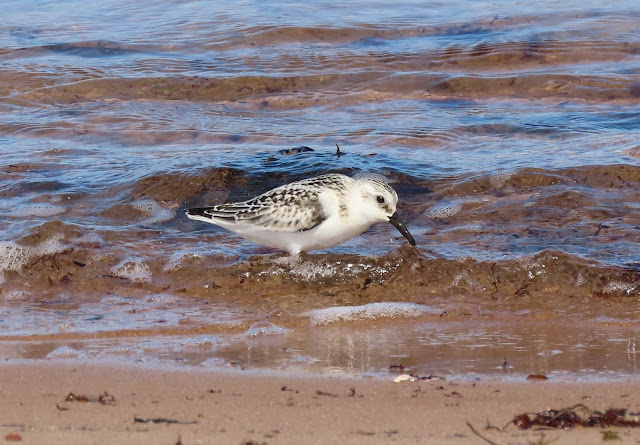 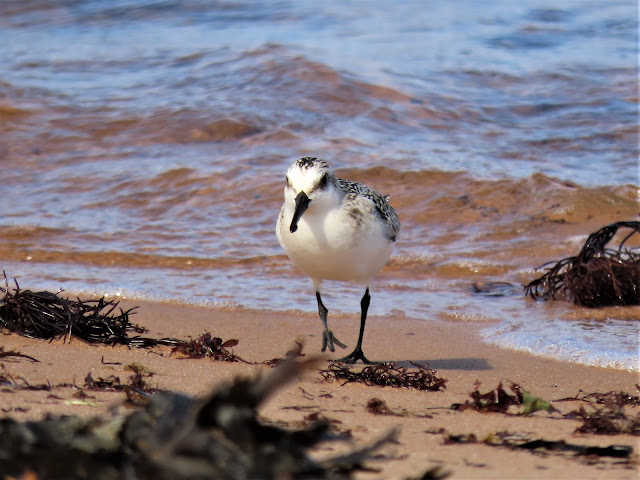 There seemed to be about half as many Semipalmated Plovers (Charadrius semipalmatus) as Sanderlings. 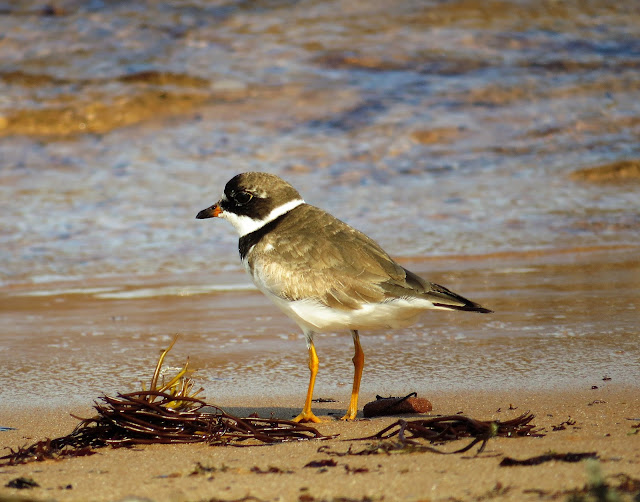 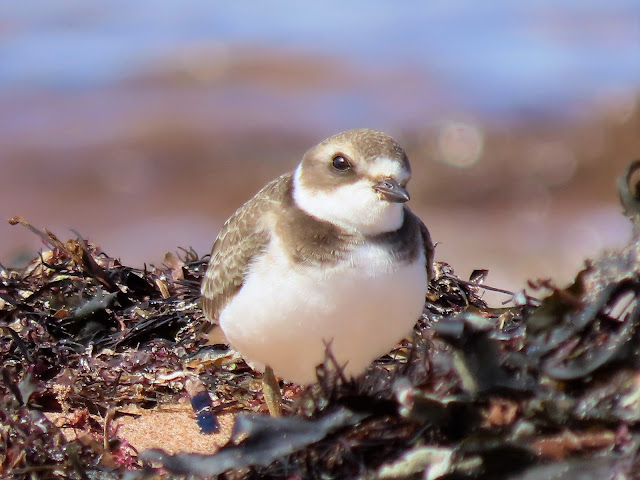 Sometimes it's good to take a nap. 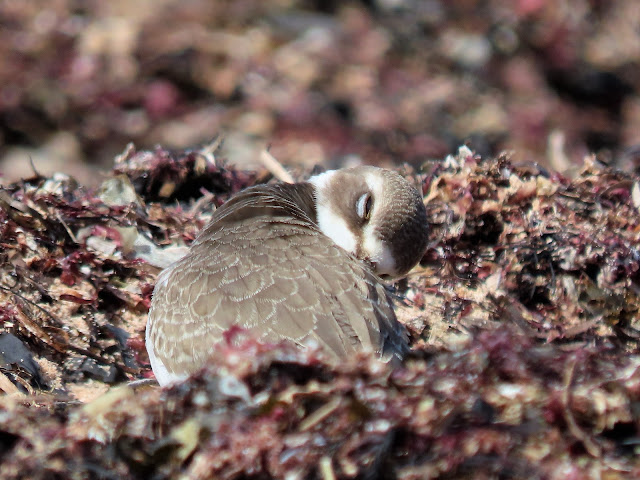 These birds really did entertain us. It was a happy experience to share their beach. 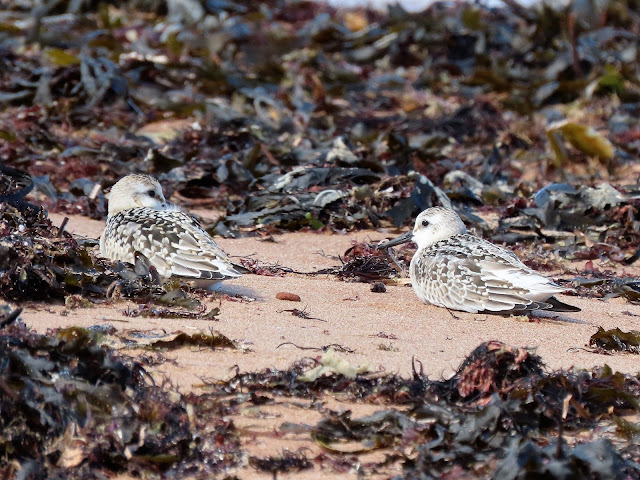 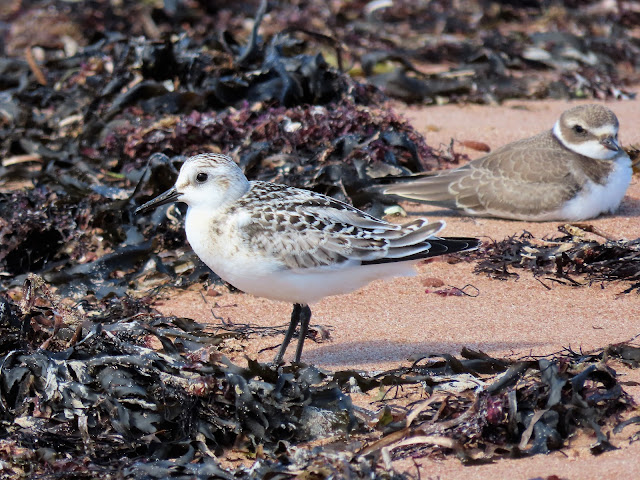 Eventually, however, it was time to leave. 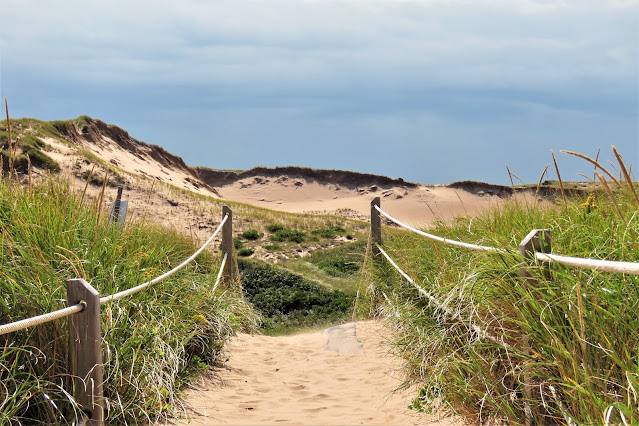 Thank you, Marie, for suggesting this magical place, and thank you, Lynne, for making sure that we made the visit.
We hope to do it again one day.
Marie had also mentioned St. Peter's Harbour and Savage Harbour as attractive destinations, and we checked in at both locations.
The following pictures were taken during that period, but I confess to being unsure exactly where. 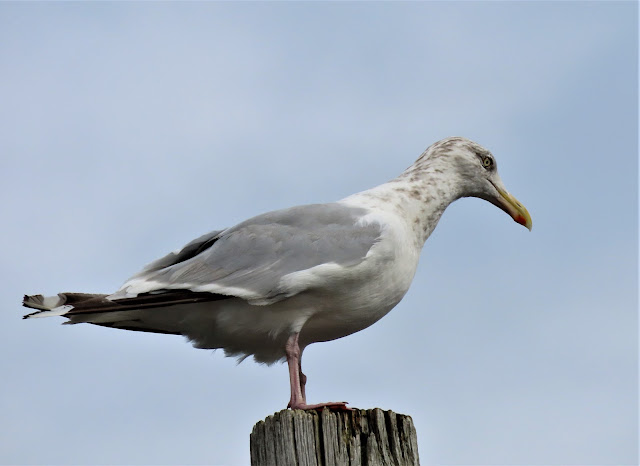 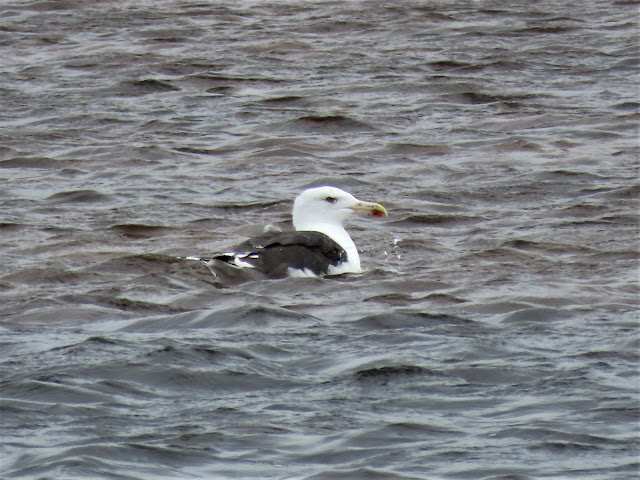 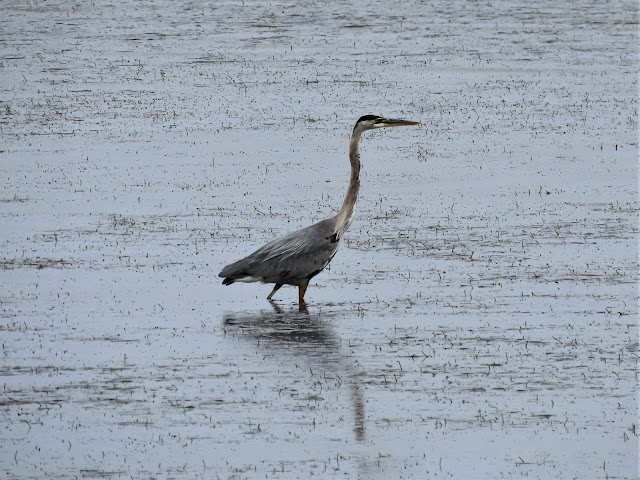 Great Blue Heron (Ardea herodias)
We stopped for dinner at a restaurant in Summerside called either Two Brothers, or Brothers Two, I was never quite sure from their logo. Miriam had a sweet chili stir fry while I had a cup of seafood chowder and a Buddha Salad. All was very tasty.
We returned to our room at Baker Shore, well satisfied with another great day on Prince Edward Island.
David M. Gascoigne, at 09:00