Happiness is a few more birds of Australia!
Australian Darter (Anhinga novaehollandiae)
Anhingas and darters the world over are exceedingly interesting birds, with a specialized lifestyle that weds them to water in every aspect of their lives. 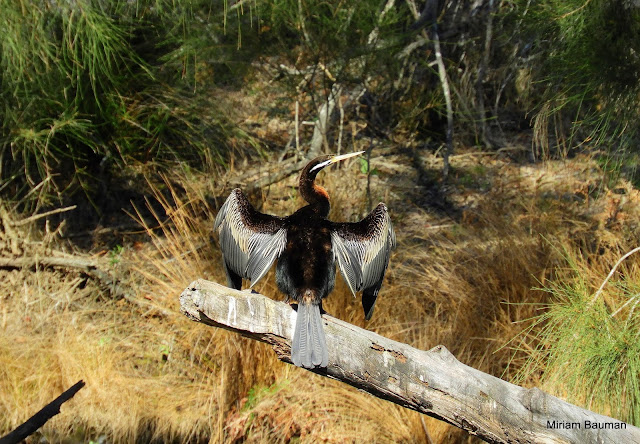 Like cormorants, darters are not equipped with waterproof wings, and spend extended periods drying their wings after being submerged.
Darters settle so low in the water that often only their head and neck is visible, leading to the common practice of referring to them as snake birds. 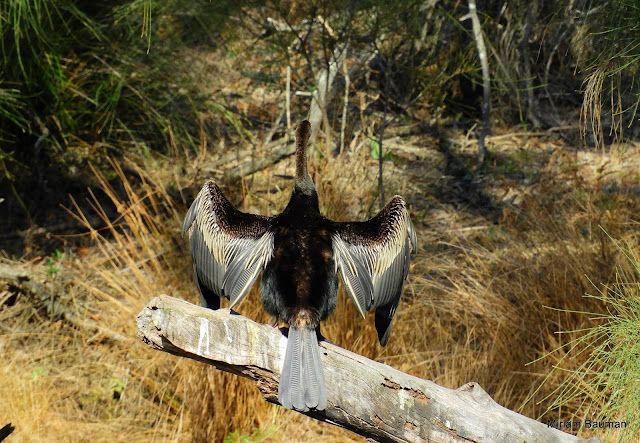 Fish are generally stabbed, large prey with both mandibles, and smaller fish with the upper mandible only. Upon surfacing the fish is adroitly tossed into the air and caught head first and swallowed whole.
Australian Darter is more dimorphic than other anhingids and you may see the wonderful reddish brown patch on the female's neck in the first picture.
The following image, with an individual perched alongside a Little Pied Cormorant (Microcarbo melanoleucos), shows the difference in size. The two species coexist by preying on fish of different size at varying depths. 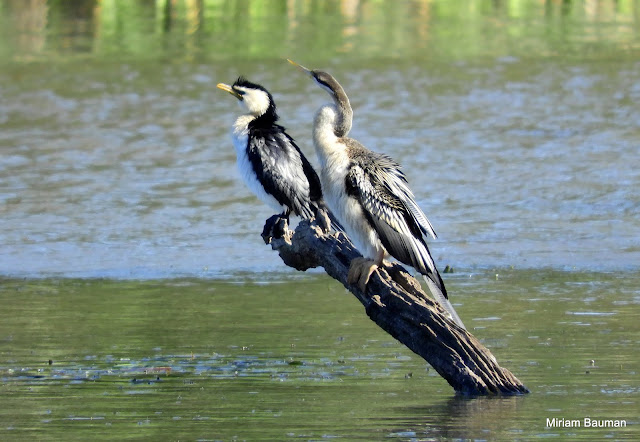 For those readers in North America, Anhinga (Anhinga anhinga), widespread in the wetlands of the southeast, is our local representative of this family.
Lewin's Honeyeater (Meliphaga lewinii)
This beautiful species takes its name from John William Lewin, an English naturalist who spent the last nineteen years of his life in New South Wales, until his death in 1819. 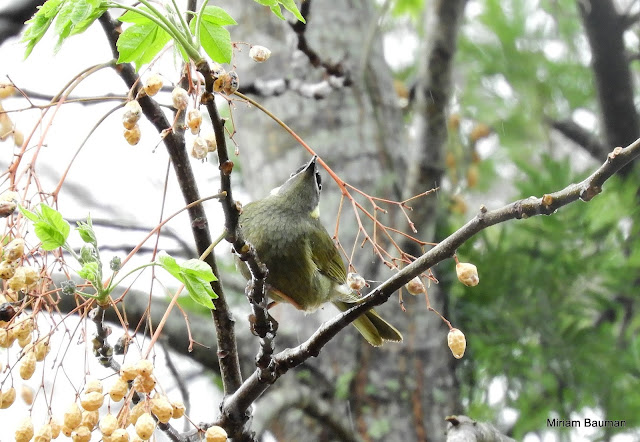 As is the case with all honeyeaters it is a charming bird. It is widespread throughout eastern Australia and is quite bold in its habits. 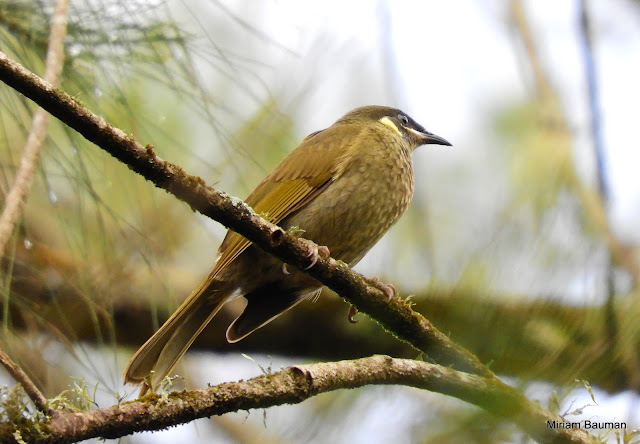 It has no hesitation in probing cultivated fruits, sweet food in houses, and picnic tables. 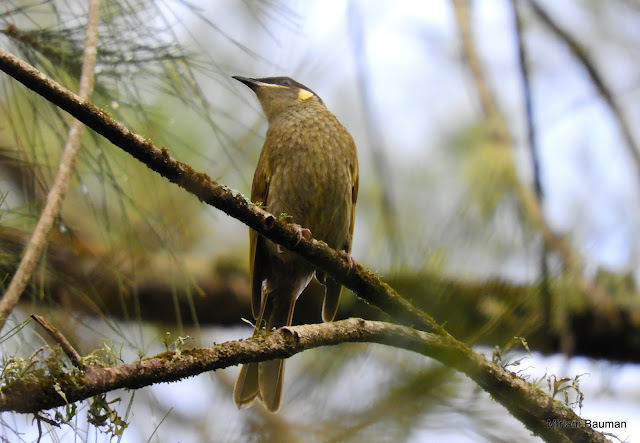 When I return to Australia I will perhaps take a hummingbird or oriole feeder with me. That sugar water should be a real magnet for Lewin's Honeyeater and I will have the pleasure of seeing it up close!
Royal Spoonbill ( Platalea regia)
I don't know of anyone who does not find spoonbills inherently attractive  due to the very nature of their outrageous, but none the less efficient, bills. 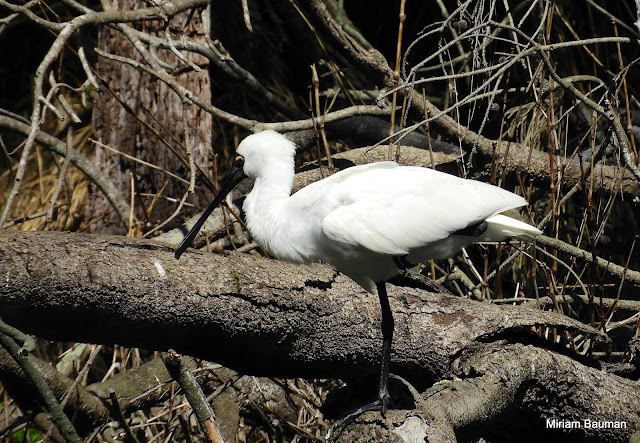 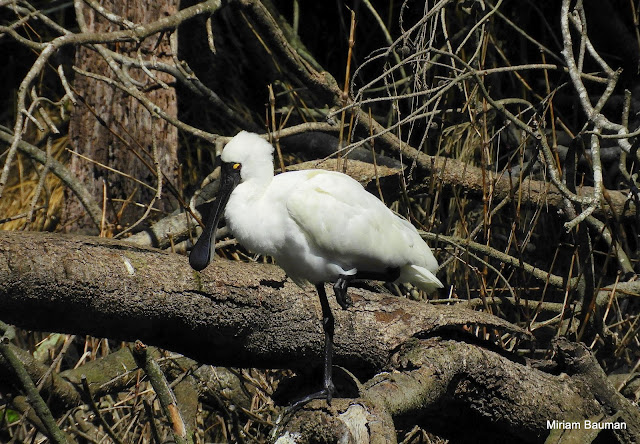 Most food is captured by sweeping the bill from side to side and grabbing onto anything the bill comes into contact with. Prey is also visually located, however, and I have seen spoonbills seize quite large fish in the manner of a heron. 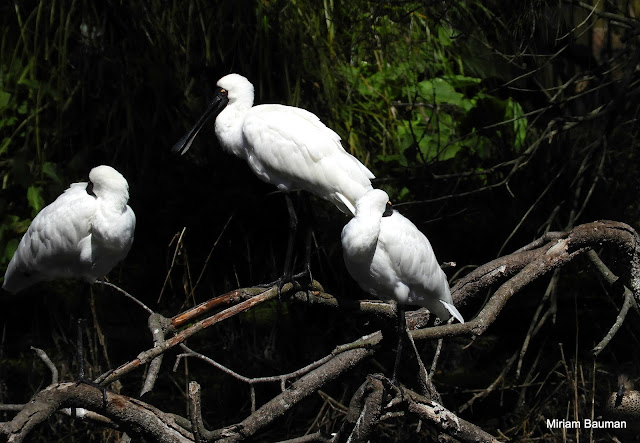 Spoonbills are gregarious birds and seldom is one seen alone. 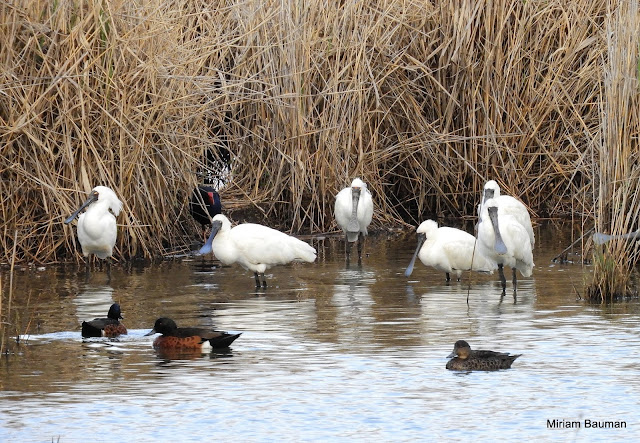 The above picture was taken at the Tamar Island Wetlands in Launceston, Tasmania, where this species has become a fairly recent colonist. You can see Chestnut Teal (Anas castanea) in the foreground and a Dusky Moorhen (Gallinula tenebrosa) emerging from the reeds. If that's not a dose of magic, I am not quite sure what is!
Bar-shouldered Dove (Geopelia humeralis)
Australia is blessed with a stunning assemblage of pigeons and doves, and Plain Janes are not included!
Bar-shouldered Dove is found throughout eastern Australia and in the north all the way over to Western Australia. 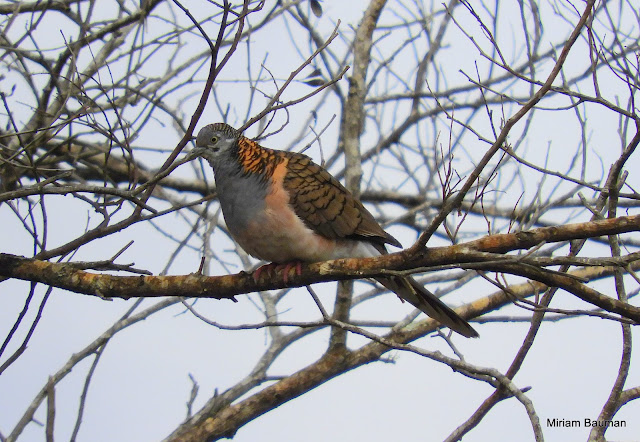 It was not a bird that we saw often, but we always took the time to enjoy it when we did. I have seen it called Bronze-necked or Copper-necked Dove in older texts, and it seems to me that this is a more descriptive name.
As with most species of columbid a flimsy nest of twiglets is constructed, with two eggs incubated by both parents. 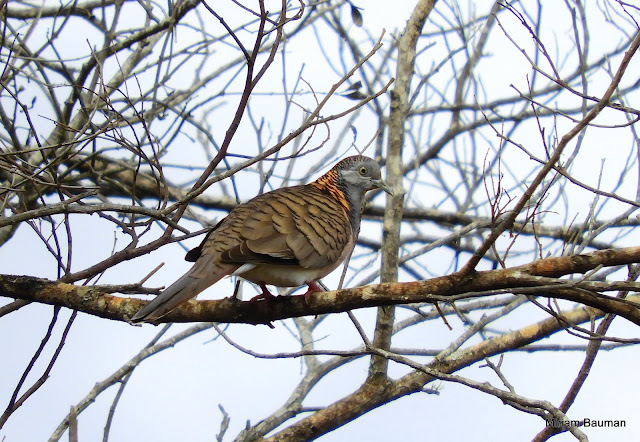 Bar-shouldered Dove is not as gregarious as other Geopelia, usually occurring in pairs or small parties.
Spotted Dove (Streptopelia chinensis)
Spotted Dove is not native to Australia and its specific name speaks to its Asian origins. 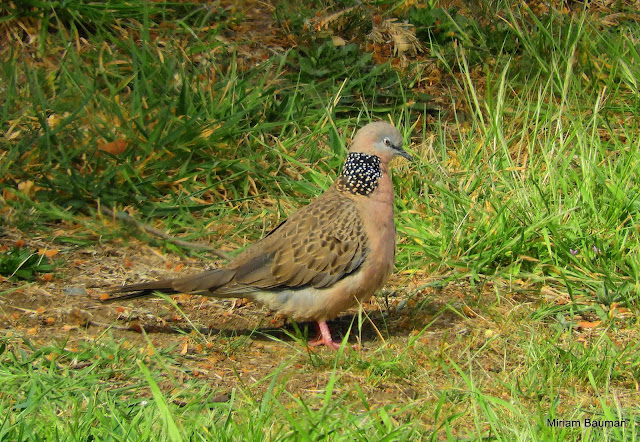 It is a handsome species and has become part of the avifauna of Australia, having been introduced into the country as far back as the 1860s - and it has prospered.
On any rational level it would seem counterintuitive to inject a new dove into a country where spectacular pigeons and doves abound, but rationality has never been a component of human decision-making as it applies to introduced species - and to many other things too! 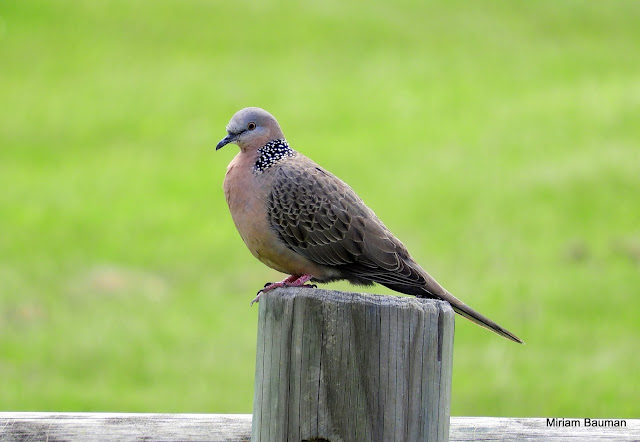 It is a polytypic species and there are many intergrades between the various subspecies; in fact this is the norm and "pure" subspecies are seldom found. 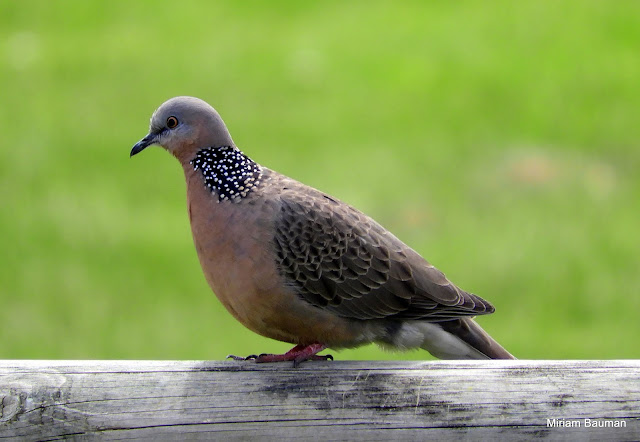 It builds a flimsy platform of twigs, as do most doves, but occasionally lays three eggs as opposed to the usual two. I was unable to verify whether the third chick normally survives under such circumstances. Perhaps someone knows?
Australasian Swamphen (Porphyrio melanotus)
My "Bible" for rails, crakes gallinules and coots is Rails, Barry Taylor (1998), Yale University Press. At the time it was written a good deal of controversy was energizing the taxonomic world regarding what was then known as Purple Swamphen (Prophyrio prophyrio).  Considerable support was emerging for splitting this species into several distinct species, primarily based on mtDNA sequence data. One of the forms high on the list for elevation to full species was melanotus.
And so, I present to you Australasian Swamphen (Porphyrio melanotus)! 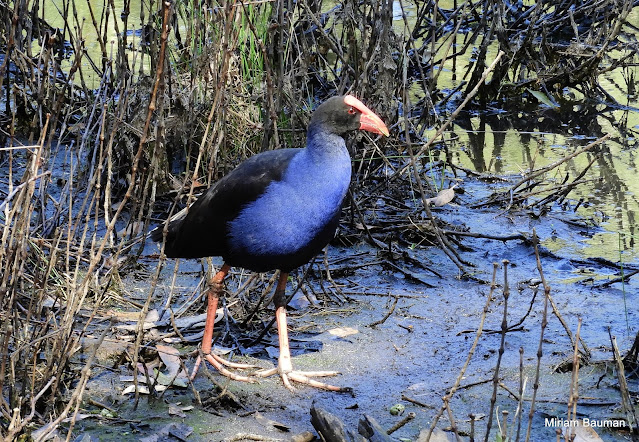 As you may see, it is equipped with strong legs with long toes well adapted to soft, uneven surfaces. 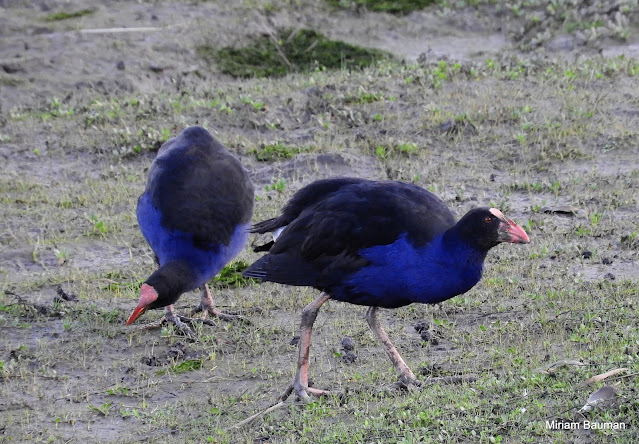 It is a large bird (38-50 cm) and we encountered it in the three states we visited. It quickly loses its fear of humans and walked among us without hesitation. When we were seated at a picnic table having lunch it was around our feet. It has a rich and varied vocal repertoire and was not hesitant to announce its presence. 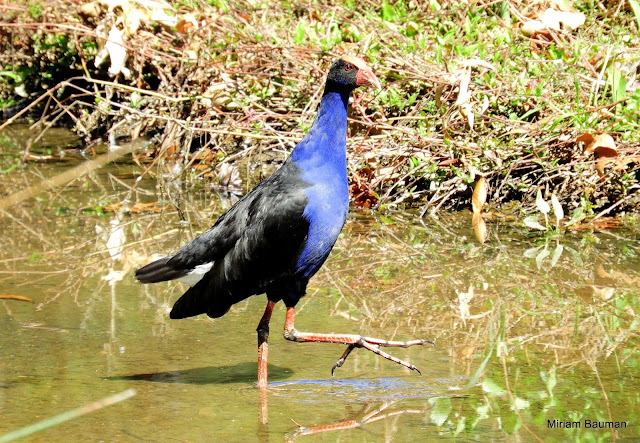 The bird above seems to be strutting like a North Korean soldier on parade!
This species is omnivorous, although primarily vegetarian. We did see it snapping up insects, however, and it is known to relish fish and amphibians.
Posted by David M. Gascoigne, at 20:00