More fabulous birds from Australia!
Straw-necked Ibis (Threskiornis spinicollis)
I remember well the first time I saw this bird, strutting across a field in suburban Sydney, NSW. We were passing through a highly developed residential area, and the field appeared to be the last  undeveloped tract of land, soon to go under the bulldozer no doubt. 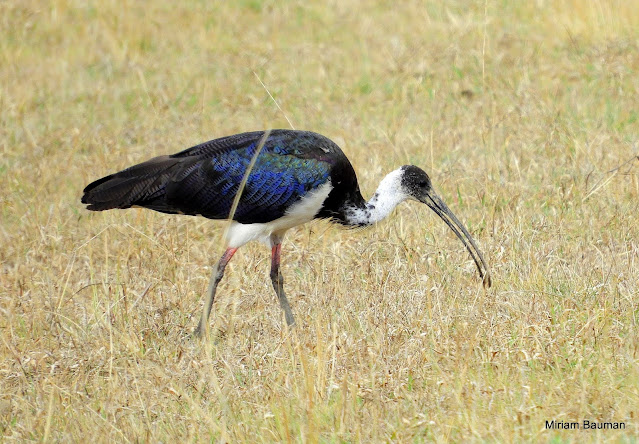 The range of many birds is shrinking as humans gobble up their living space and this sighting provided a graphic illustration of this trend.
There were no further sightings in NSW but we were fortunate to meet up with this species again in Victoria. 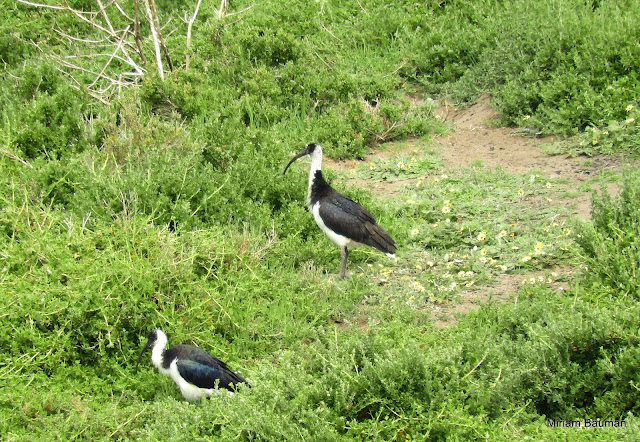 Breeding Straw-necked Ibises take advantage of the rainy season to assure a reliable supply of water, essential for successful breeding. 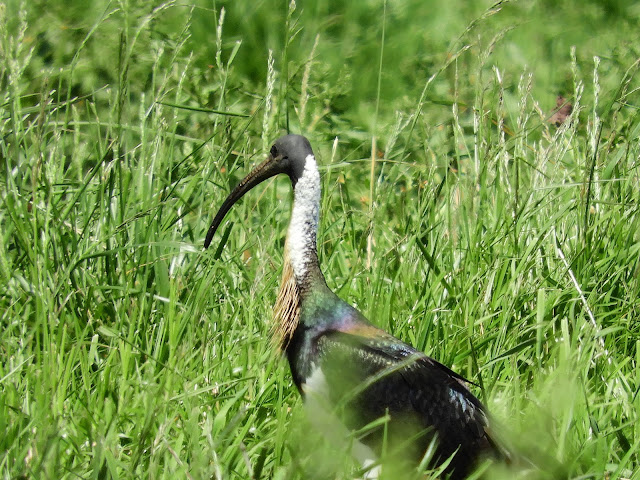 The principal diet of Straw-necked Ibis comprises a wide variety of larger insects such as locusts, grasshoppers, crickets and beetles, supplemented by small lizards and crayfish. Unlike the more common Australian White Ibis (Threskiornis molucca), a true opportunist, Straw-necked Ibis is not known to feed at garbage dumps and rubbish tips.
Masked Lapwing (Vanellus miles)
This is a very common species that we saw almost every day in a variety of locations, from our front lawn to parks, on beaches, estuaries and on rocky shores. 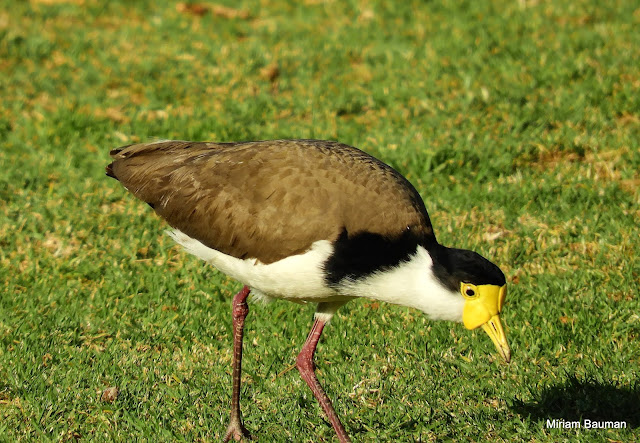 It is unmistakable due to its large size, black head and outrageous yellow wattles around the eyes. Masked Lapwing tolerates humans well, but if you get too close to its young it will fly at you, screaming all the while. If you look closely at the bird's left wing you will see a spur, present on both wings, a vestige of primitive fighting apparatus. 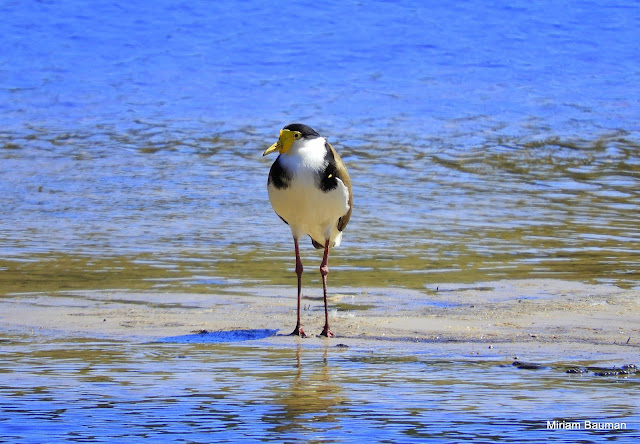 It feeds in typical plover fashion, taking a wide range of insects, earthworms and small invertebrates. 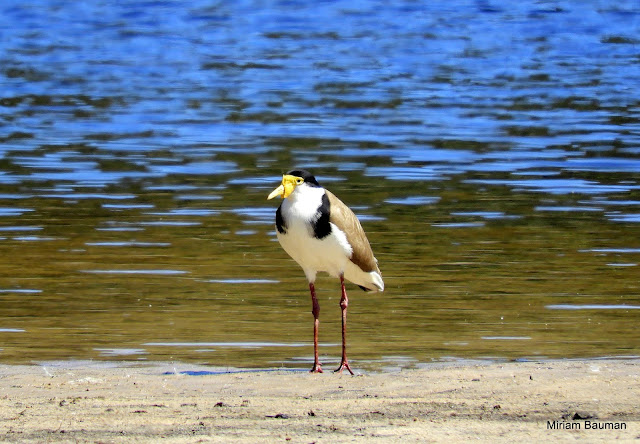 I do not have a great picture of its young, but the following will show you how appealing they are. 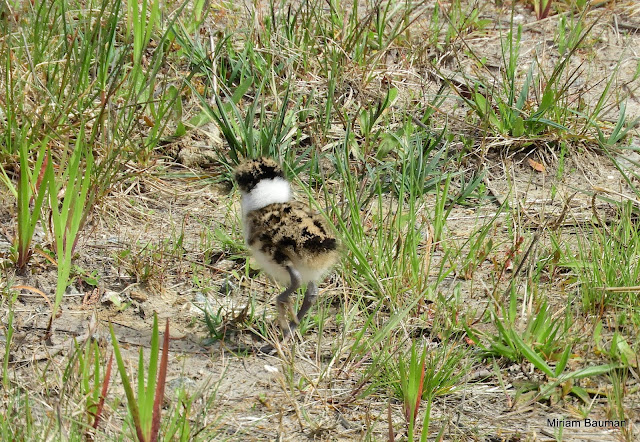 When danger threatens, the chick, in response to a specific call from its parent, flattens itself against the ground, and as long as it remains motionless is virtually invisible to a would-be predator.
Red-kneed Dotterel (Charadrius cinctus)
I was elated when we saw this species at the Western Treatment Plant in Werribee, VIC, that most iconic of Australia's birding locations. (Thank you Stewart Monckton for a fabulous day there). 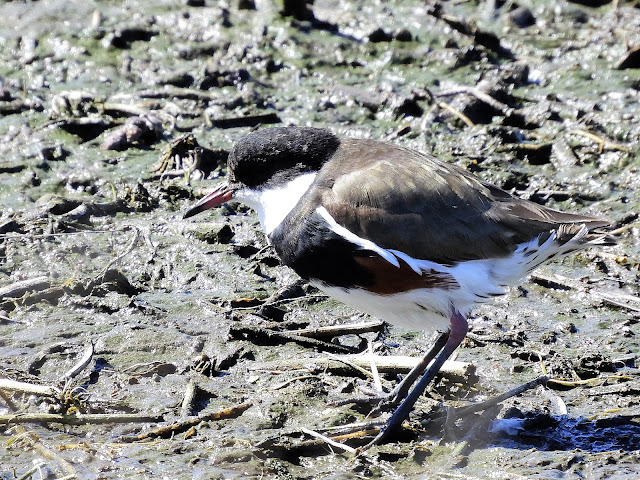 It is a visually appealing species, a freshwater specialist and, unusual among plovers, it builds a substantial nest. Furthermore, it feeds uncharacteristically while wading in water, frequently submerging its head, and is not reluctant to swim. 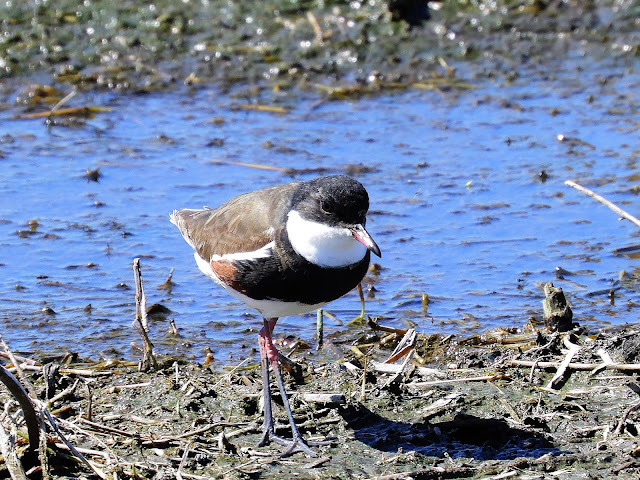 It has an unusually upright stance, or even with protruding breast facing downwards, a posture which sets it apart from other plovers. 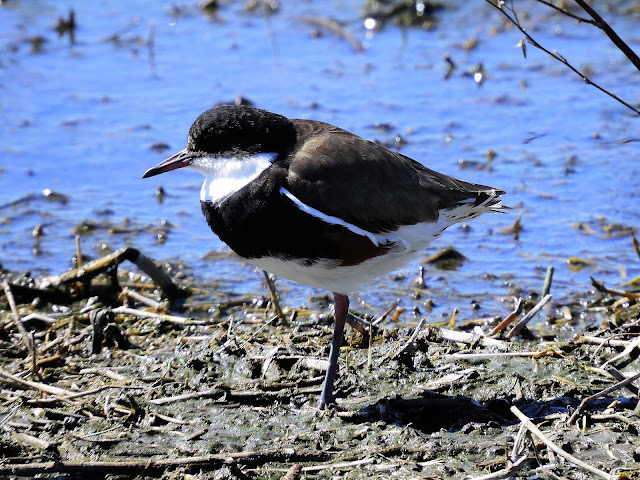 We only saw this species on one occasion, but it was a very cooperative bird and permitted us the time to study it well.
It is clearly impossible to select high points during a trip which contained nothing else, but this encounter for me had a distinct upper level of excitement to it. If COVID eases up on us all and permits travel to Australia next year, I will be looking for it again, of that you may be sure!
Red-necked Avocet (Recurvirostra novaehollandiae)
An avocet at any time is enigmatic, verging on exotic, so to encounter a new species is the stuff of high drama! 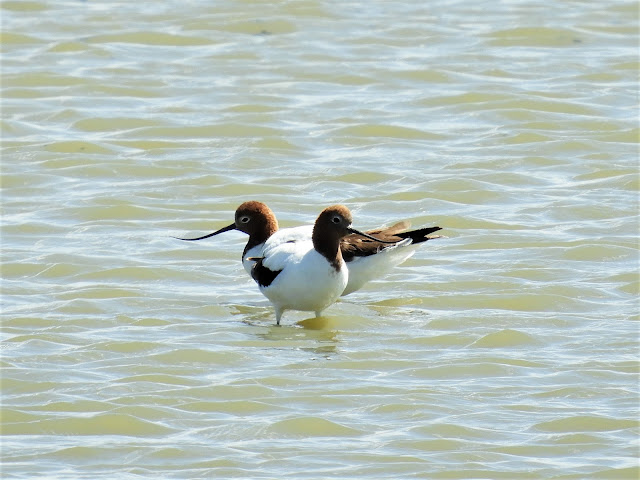 The curved, upsweeping bill gives an air of bravado and devil-may-care to an avocet, a definite hint of panache, combined with elegance I might add. 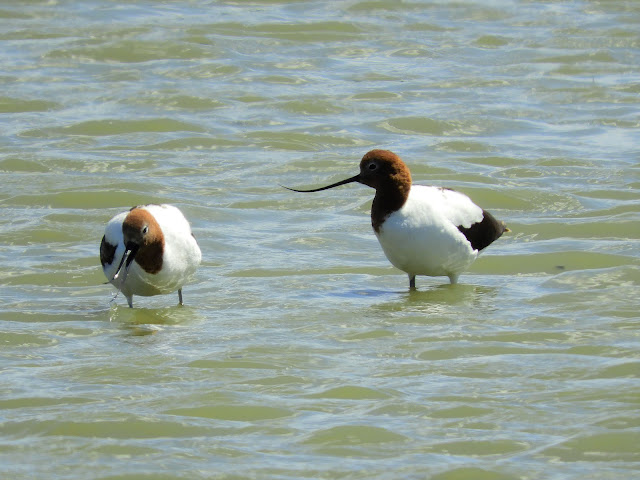 An avocet feeds by swinging its bill from side to side through the water, locating small shrimp, fish or insects by touch and clamping down on them on impact. 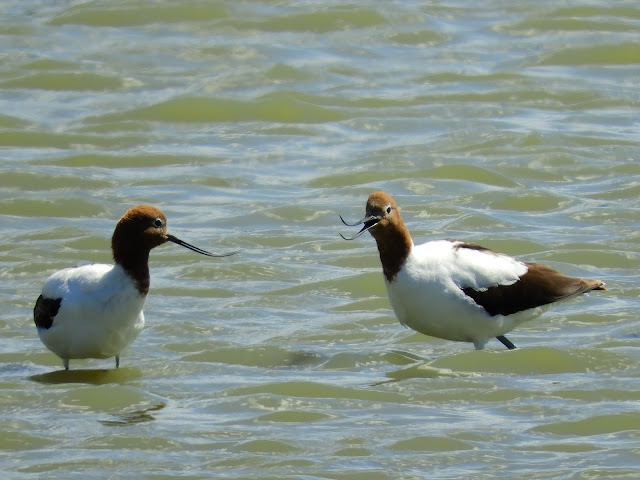 It is not hesitant to swim, resembling a small duck. 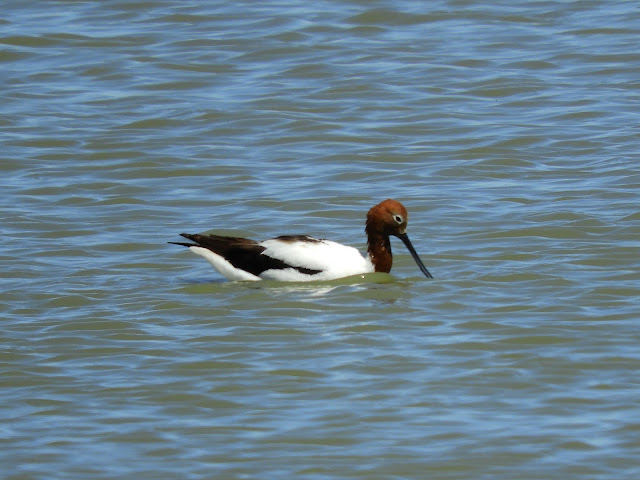 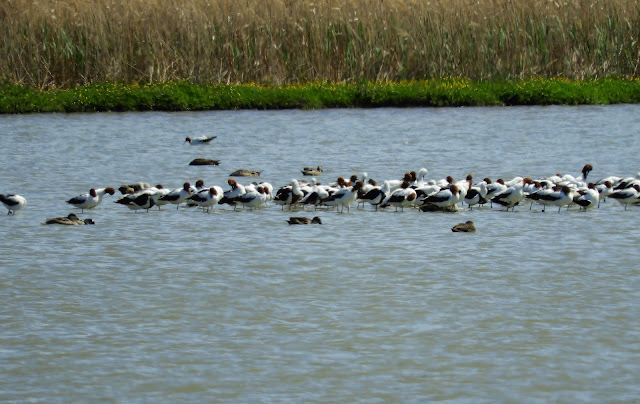 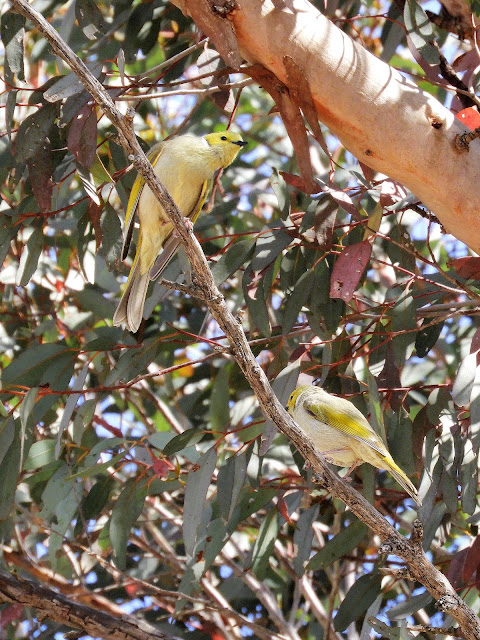 I would love to see a skilled wildlife artist produce a canvass of this delicate, appealing bird. 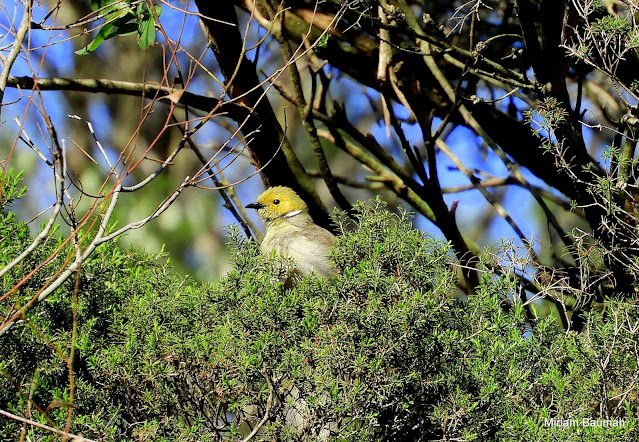 It is seldom found far from water in open forests and woodlands. River Red Gums (Eucalyptus camaldulensis) are its preferred tree, and its distinctive call enlivens the woodlands. 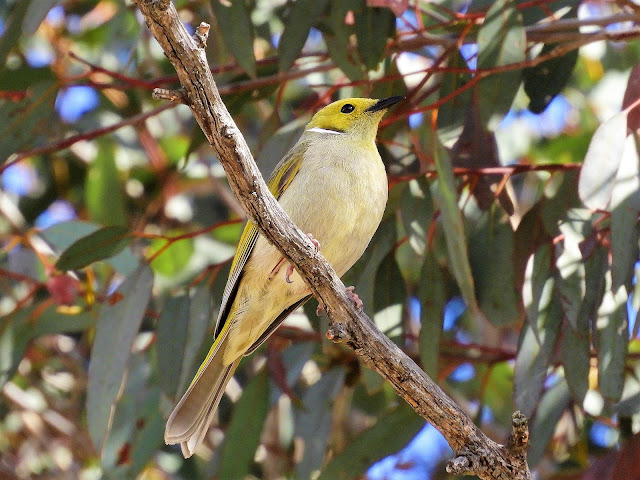 It is not a species that we saw often so there was an added sense of joy when we did.
Brown Falcon (Falco berigora)
We had only one sighting of this bird, but it was an extended look at it stationary and in flight, as it launched itself from a perch and returned to it. 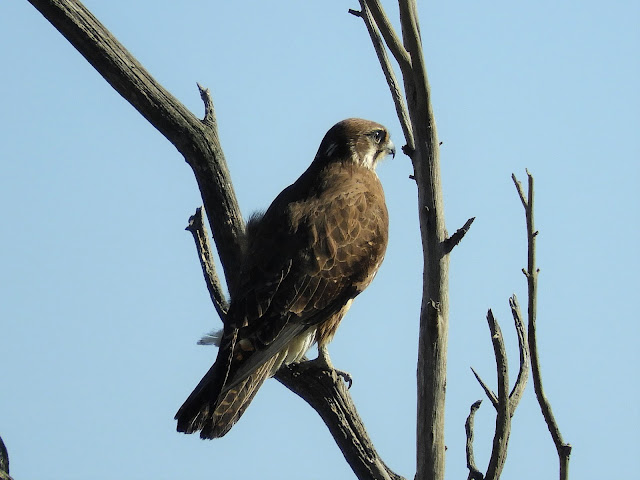 This species has a marked preference for perching on dead trees in an upright stance, which is exactly how we encountered it, proving as always that knowledge of habitat improves one's success at finding birds. 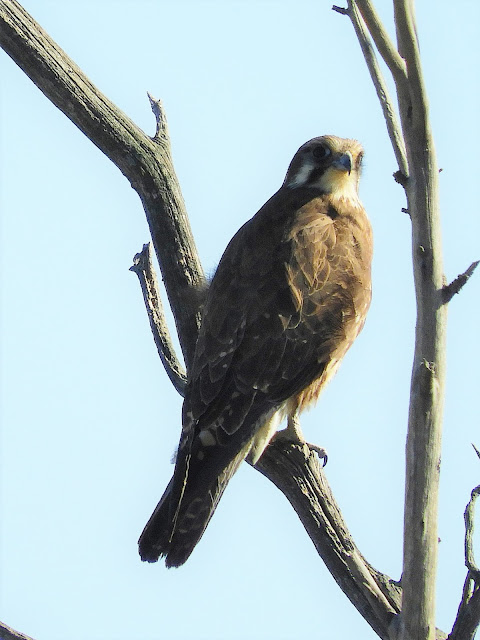 Brown Falcon has a catholic diet which includes small mammals, insects, reptiles including snakes, fish, frogs and crustaceans. It does not hesitate to take advantage of carrion and has been observed stealing food from other less agile raptors. 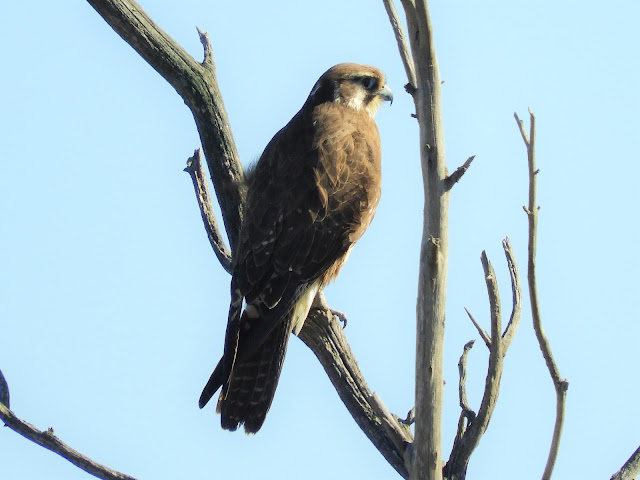 That's all for this time. I might have enough pictures to squeeze out one more post in this series of memories of Australia!
Posted by David M. Gascoigne, at 04:00