I hope you will enjoy getting to know a few more Australian birds; it has been fun for me looking through the pictures and selecting them. I think there might be one more episode (maybe two) but that's for later.
As before, the birds are not in taxonomic sequence; they are in fact in no order at all!
White-browed Scrubwren (Sericornis frontalis)
One might be forgiven for thinking that all of Australia's birds are brightly coloured and standouts in a crowd, but some are almost the equivalent of the little brown jobs of my part of the world. White-browed Scrubwren would fit into that category. 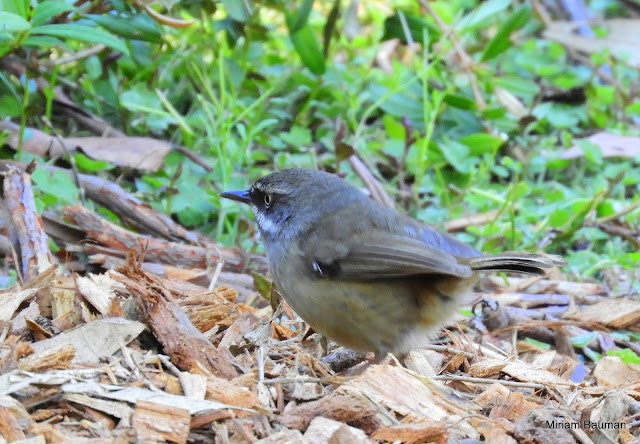 It was common in New South Wales and Victoria, and we delighted in its company, hopping along the ground, chattering noisily. 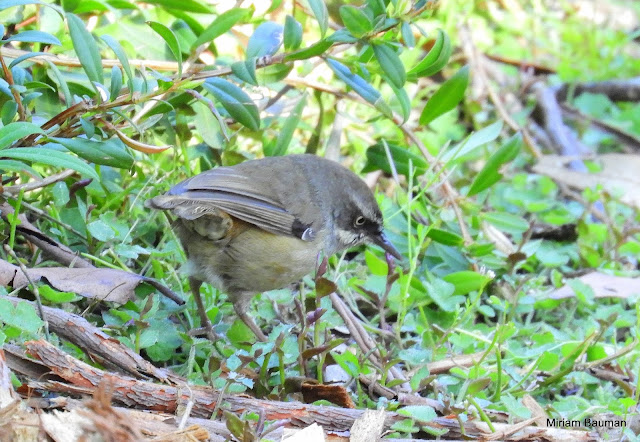 It is quick to scold intruders, including snakes, its size belying its feistiness. 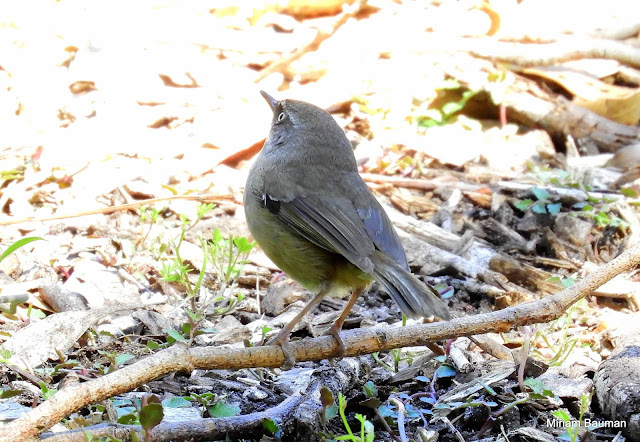 We encountered it in various habitats, including gardens, forest undergrowth and scrubby woodlands. 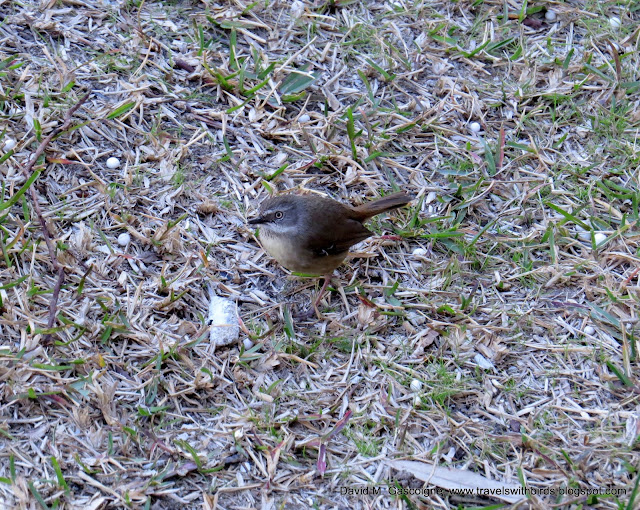 Based on our observation it seemed to have great success fossicking for insects on the ground.
Green Catbird (Ailuroedus crassirostris)
I have only one reasonable picture of this species, but it is such an interesting bird I was loath to omit it on that account. 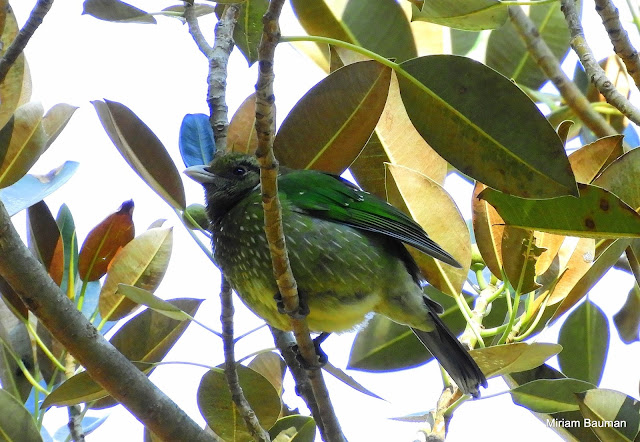 The only place we encountered it was in Royal National Park in Sydney, NSW in an area named Fig Tree Flats, very appropriate since this species is known to favour fruit, especially figs. The association with figs (Moraceae) dates back to the pioneering visit of John Gould (1840-8), and recent systematic studies have emphasized it.
It is a bowerbird that does not build a bower, and it is said that its catlike call cannot be mistaken for anything else. As far as I recall, we did not hear it!
During courtship the male is extremely attentive to the female and feeds her with impressive regularity. She begs constantly and this interaction seems to substitute for the bower of other species, such as Satin Bowerbird (Ptilonorhynchus violaceus) found in the same area. Figs are mainly fed but during pre-laying fruit is supplemented by insects and their larvae.
Suggestions that birds maintain courts decorated with leaves for courtship remain unconvincing, and is unsupported by solid evidence.
Fan-tailed Cuckoo (Cacomantis flabelliformis)
Fan-tailed Cuckoo is an obligate brood parasite that is a year-round resident in the areas where it occurs, enabling it to take advantage of various species with different egg dates. 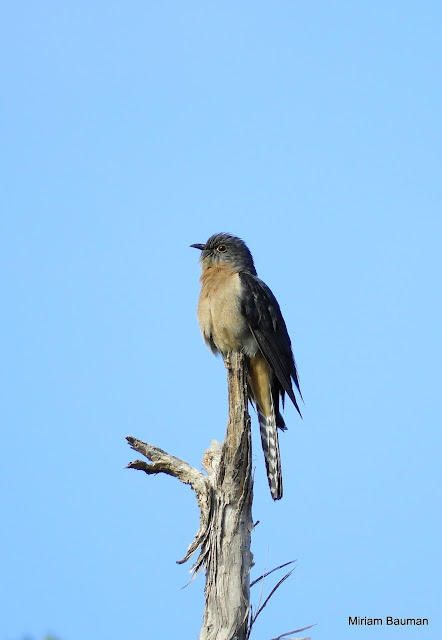 It typically favours host species such as thornbills, fairy-wrens and scrubwrens.
Food consists mainly of insects, especially hairy caterpillars as is common with other cuckoos, beetles, cockroaches, diptera larvae, flying moths, wasps, ants and spiders. It forages mainly in the foliage but when feeding on the ground will also take earthworms. 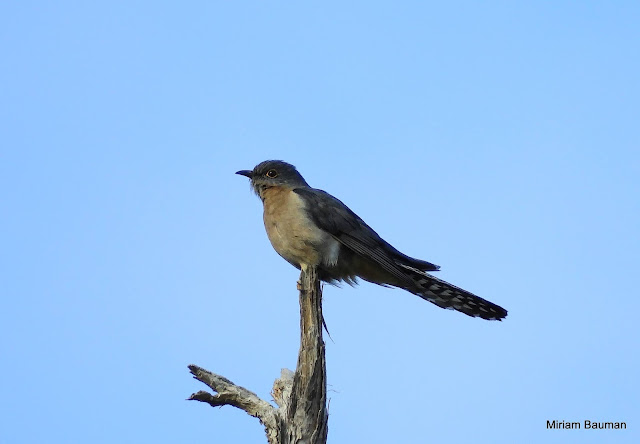 It is proficient at hawking flying insects. 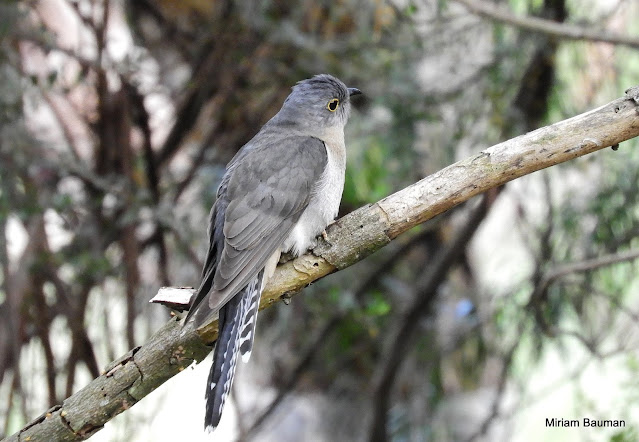 We were fortunate to see this species in both NSW and Victoria.
Australian Raven (Corvus coronoides)
It was hard to miss this bird. We saw it every day in New South Wales and Victoria. 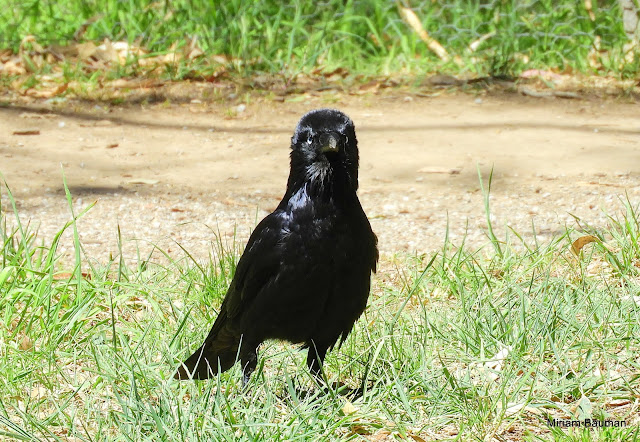 It is sleek, black, with prominent throat-hackle feathers, and like all corvids exceedingly intelligent. 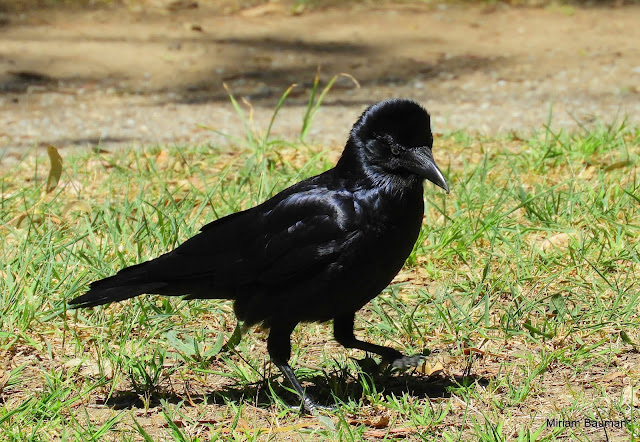 It is ubiquitous in almost any habitat and has exploited commensalism with humans to a fine degree. It is quick to take advantage of carrion and road kill is quickly cleaned up by ravens. 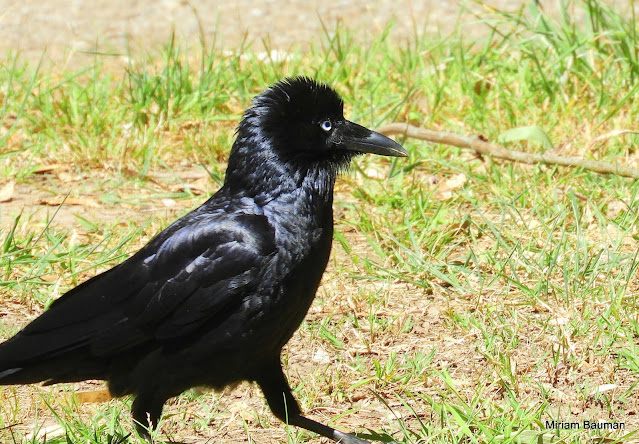 I do not recall it being especially vocal but its call is quite mournful and has been likened to a crying child.
It builds a substantial nest of sticks, lined with animal hair, fibrous bark and wool, placed either in a tall dead tree or on top of a pylon or similar structure. 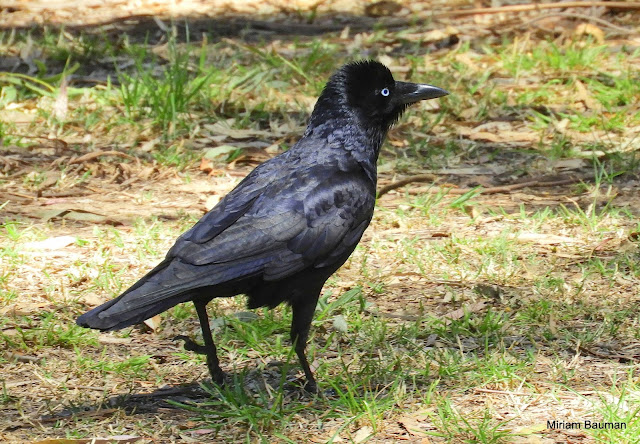 As you will see in the pictures above it has a prominent and noticeable white eye.
Pacific Black Duck (Anas superciliosa)
This species is very common and was seen in all three states we visited whenever we were in suitable habitat, which included ponds, dams, rivers, creeks and wetlands. 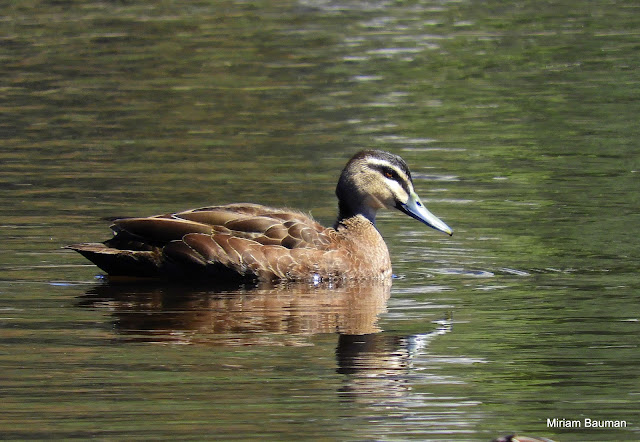 It feeds on aquatic vegetation, but in urban areas it becomes tame and people feed it bread. (Plea to people who love ducks, well-intentioned all - do not feed them bread. Cracked corn is inexpensive and far better for them). 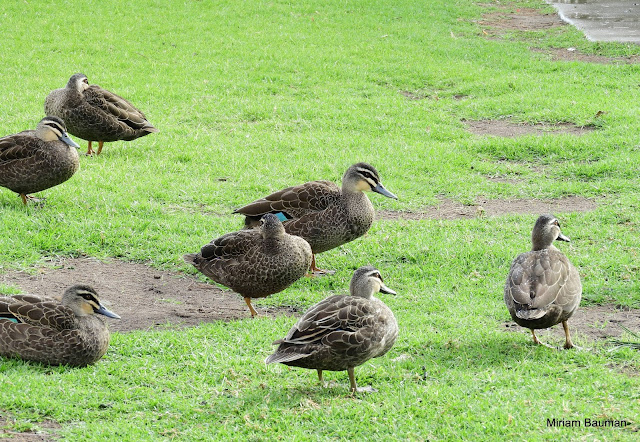 Groups gather in parks and other public places, knowing that a free meal is almost bound to follow. 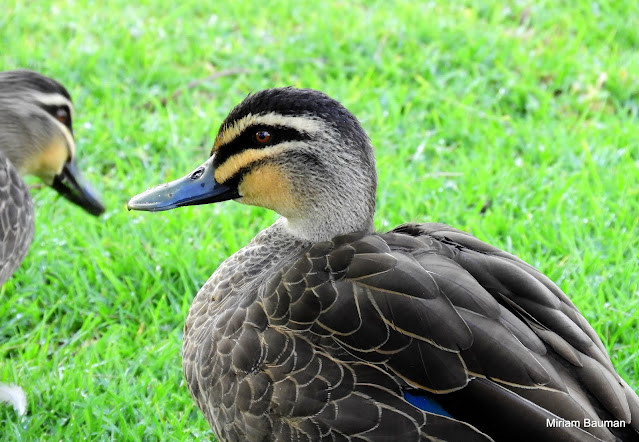 Pacific Blacks Ducks have a wonderfully iridescent speculum, which positively glows when struck by sunlight. 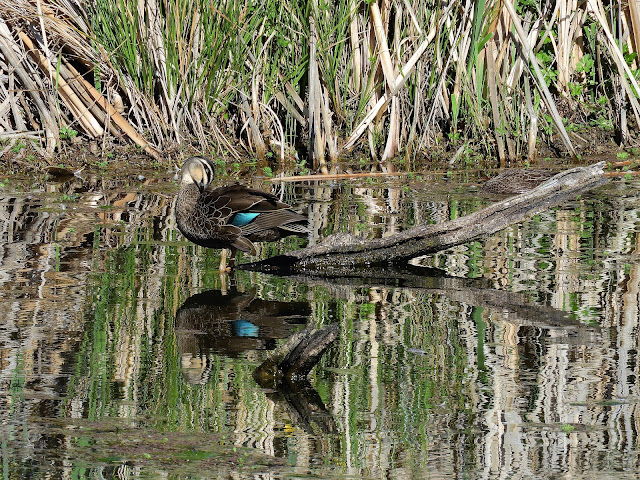 It commanded our admiration every time we saw it.
Hardhead (Aythya australis)
It is an odd name for a duck, but as far as I can determine the etymology is unclear. 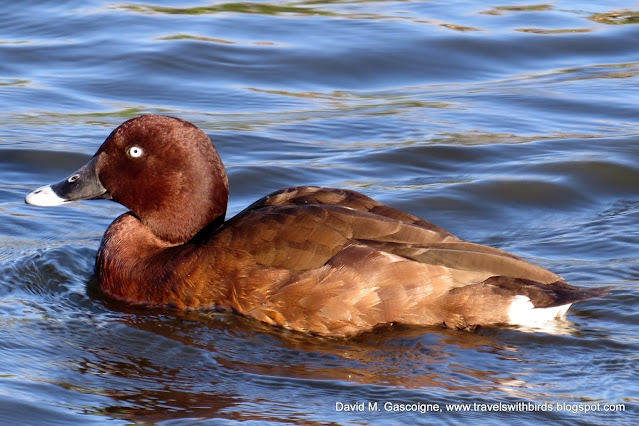 ♂
Hardhead was not nearly as common as Pacific Black Duck, and is the only duck found in the region in the genus Aytha, allying it with ducks familiar to us like Greater Scaup (Aythya marilis), Lesser Scaup (Aythya affinis), and so on. Not surprisingly then, given this affiliation, it generally frequents wetlands with deep water providing abundant bottom-dwelling food. At times huge rafts of a thousand or more congregate in suitable feeding areas. 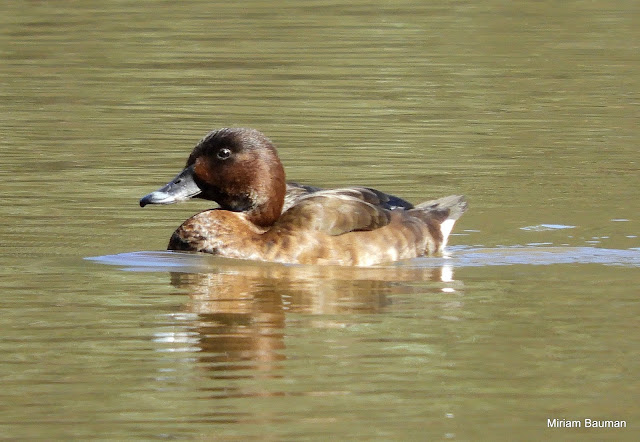 ♀
The male has a white eye, the female a brown eye. 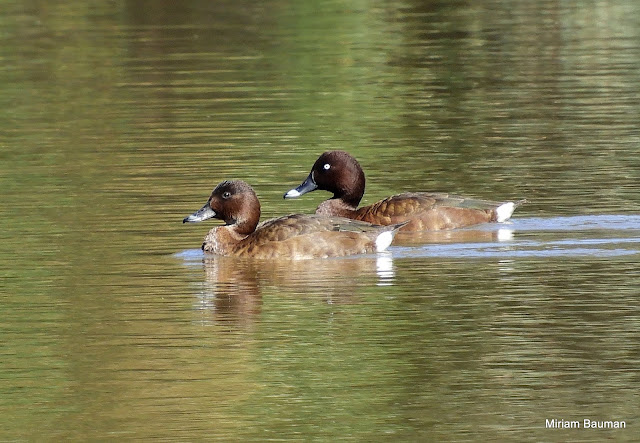 Pair
Surprisingly little is known of the life cycle of this species. Pairs seem to be solitary breeders, nesting in thick vegetation, mostly over water. 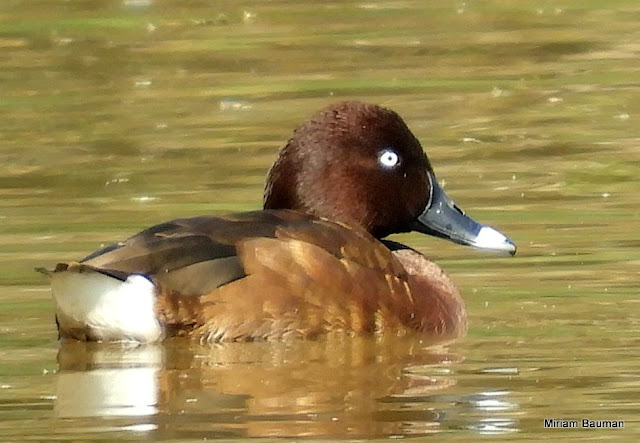 It is widespread throughout the continent, but rare in Tasmania. We saw this species on two occasions in NSW, only once in Victoria, and not at all in Tasmania.
If there is a benefit to having to endure COVID restrictions it surely must be that we have the time and the inclination to mine our photographic archives, and reliving some of my Australian experiences has given me a great deal of pleasure.
It is my hope that you have enjoyed them too.
Posted by David M. Gascoigne, at 18:53