Nature's repetitions are never boring.
Tim Dee
Of late we have been mainly confined to home by COVID lockdown, with only short excursions permitted, with a little birding here and there, so this blog entry is a combination of about a week and a half of odds and ends.
On the Post
Three Bridges Road in St. Jacobs has been a favourite birding spot for many years, and the number of species seen there is quite remarkable for a very ordinary country road.
One of the attractions is a post where people place bird seed and it has been a bit of a magnet for various species.
On 1 February we placed a little seed on the post ourselves and waited in the car for birds to take advantage of the handout. In mere minutes we were joined by a Black-capped Chickadee (Poecile atricapillus), always the most numerous species. 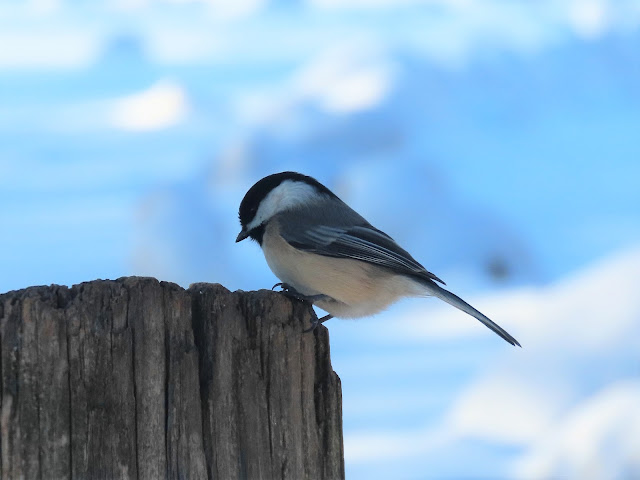 White-breasted Nuthatch (Sitta carolinensis) appears to travel with the chickadees, for as soon as one appears the other is not far behind. 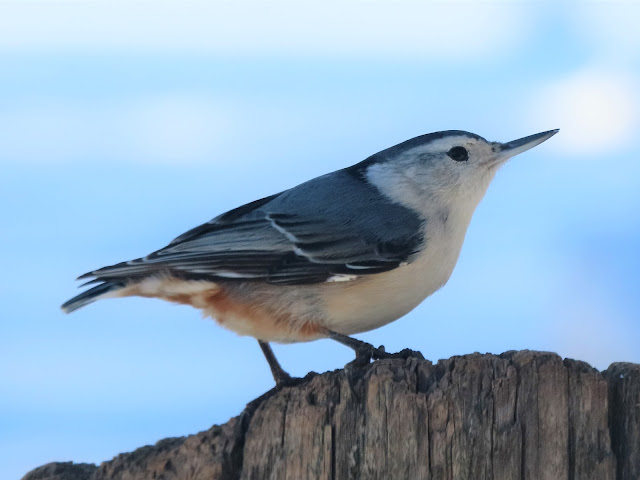 Northern Cardinal (Cardinalis cardinalis) is fairly predictable too, although not as reliable as the previous two species. 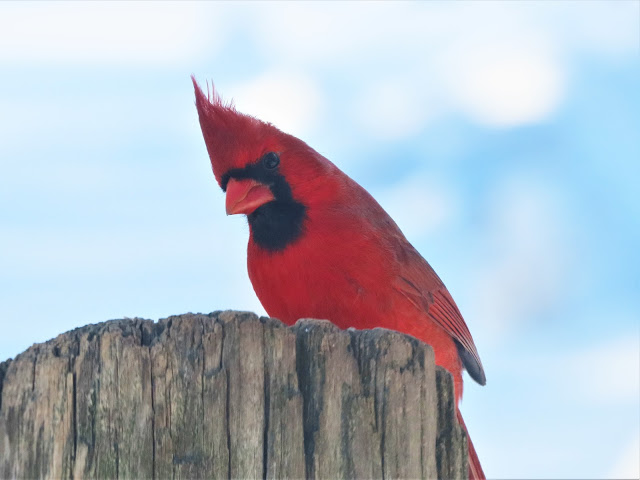 A gambling man would have a safe bet predicting that Downy Woodpecker (Dryobates pubescens) would show up nine times out of ten. 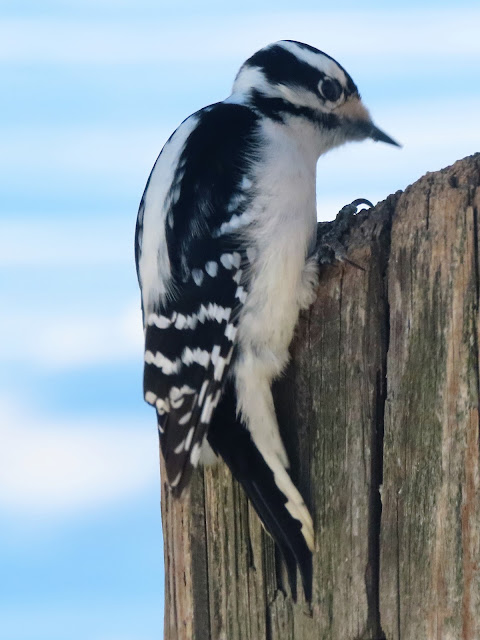 This female was collecting seeds from the top of the post and stashing them immediately below. 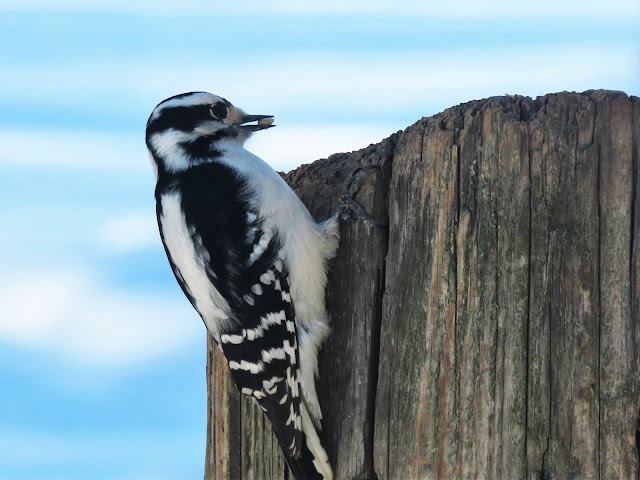 This seemed a little counter-productive to us for the chickadees and the nuthatches were there to witness it, and sometimes as many as three downies were present in the immediate vicinity, and I doubt it escaped their attention either. 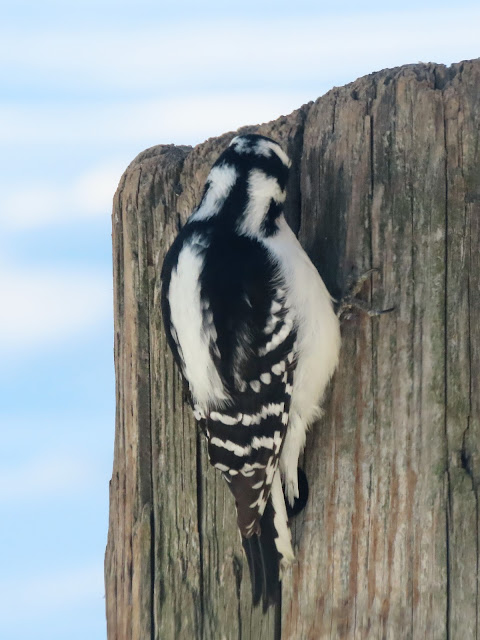 But what do we know of the ways of a woodpecker?
Several other species have used the post over the years and by digging into the archives I can show you some of them. 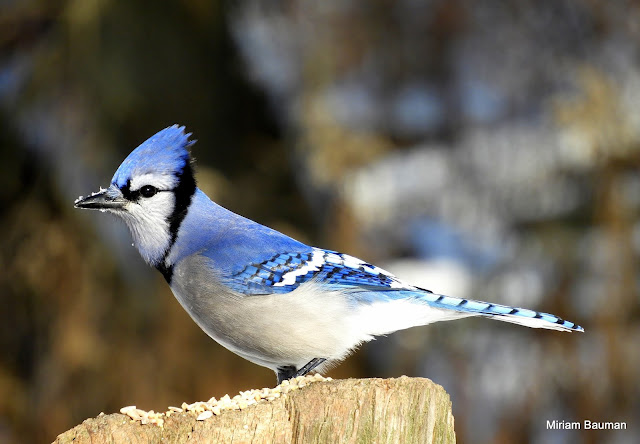 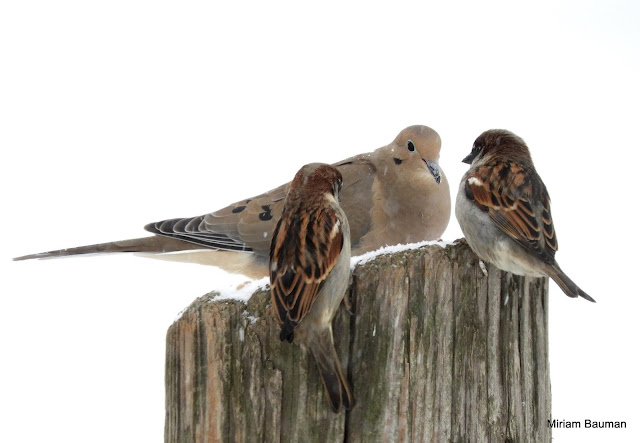 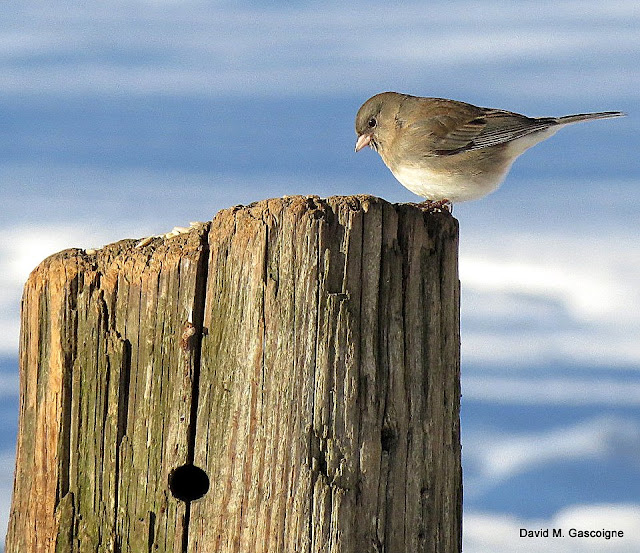 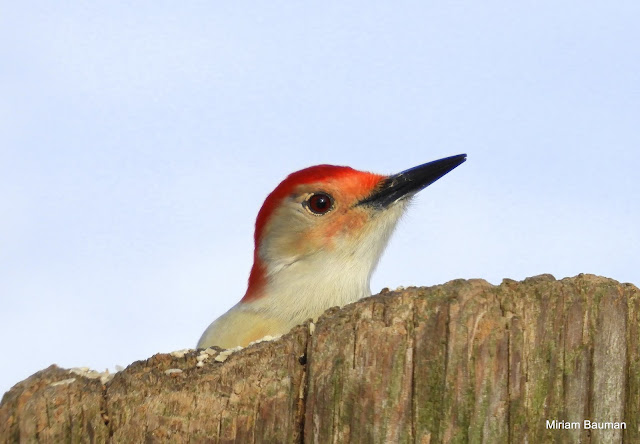 Red-bellied Woodpecker (Melanerpes caorlinus)
The post is located about a hundred metres from the Conestogo River where a group of Mallards (Anas platyrynchos) was busily feeding. 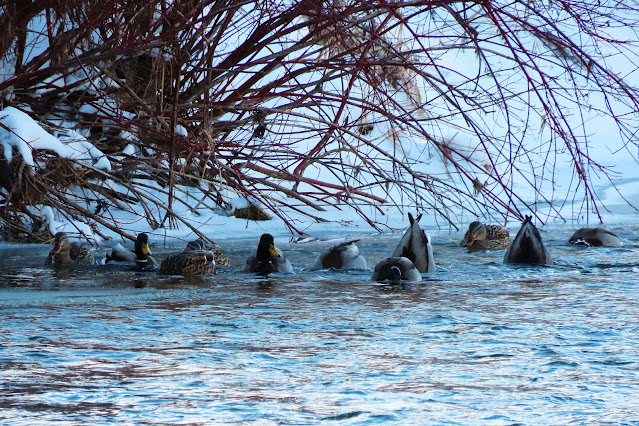 It was starting to get dark when we left and we experienced a beautiful sunset as the day came to a close. 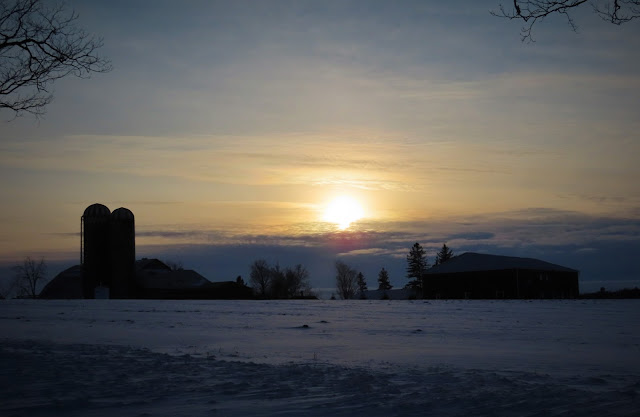 The Mill Race Trail
We have had our first cold snap of the winter recently, and even though it has not been unduly cold by normal late-January, early-February standards the temperature stayed low enough for a few days to freeze local ponds and streams.
Some enterprising skater had turned the Mill Race into a kilometre-long rink. Perhaps he (she?) had friends to help clear the snow to expose the ice. 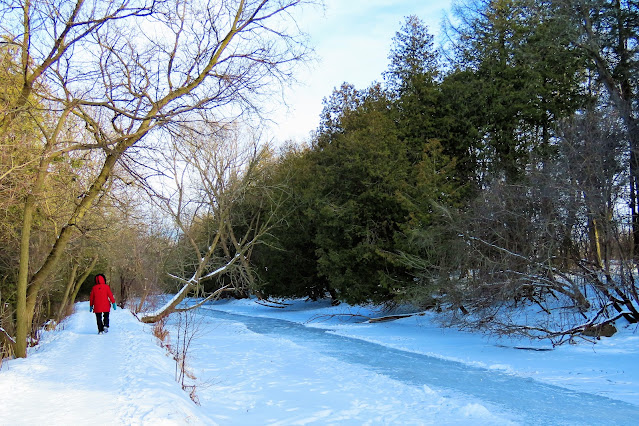 A Dark-eyed Junco paid little heed to it all. 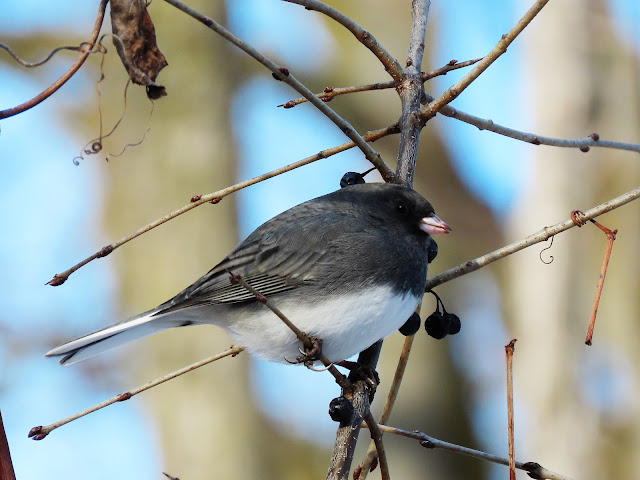 A Drive through the country
White-tailed Deer (Odocoileus virginianus) have no doubt benefitted from a mild winter with less than usual snowfall, and this individual looked sleek and healthy in a field of corn stubble.

It was far enough away that it did not take flight when we stopped the car and Miriam stepped outside to take a picture.
Winter snows lend a special charm to the landscape, and strangely, even though the farmhouse and outbuildings are there, a hint of desolation.

For the second time in the past couple of weeks we saw two Red-tailed Hawks (Buteo jamaicensis) side-by-side in a tree, uncharacteristically close at this time of the year it seems to me. 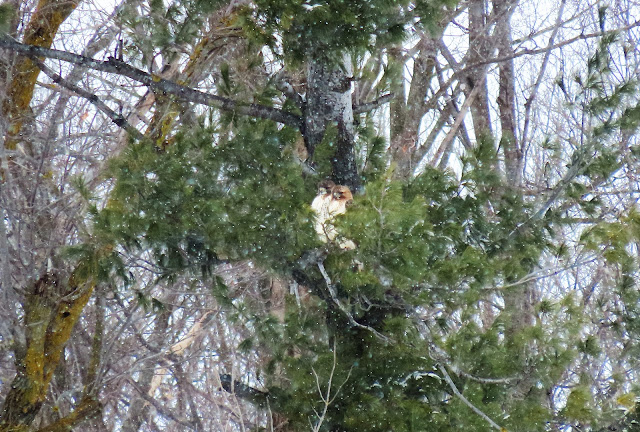 Snow Buntings (Plectrophenax nivalis) can appear like a swirling cloud in the snowy fields, and are constantly in motion, stopping to feed, but bursting into the air again at the slightest provocation, real or imagined. Despite our best entreaties this small flock was not inclined to approach us any closer. 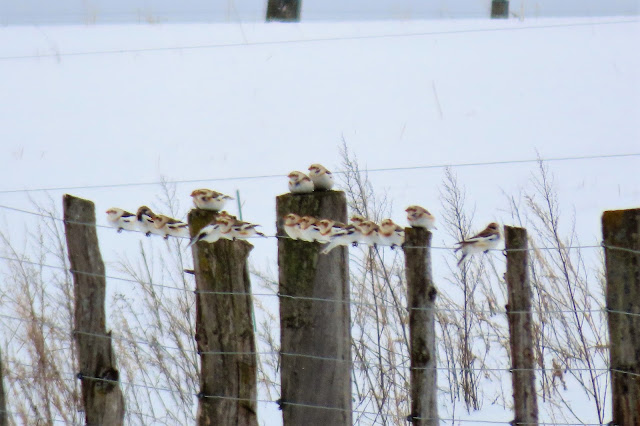 Perhaps we will see more on our next search for them and be able to share better images.
An American Kestrel (Falco sparverius), relatively rare in recent years, had succeeded in capturing dinner. 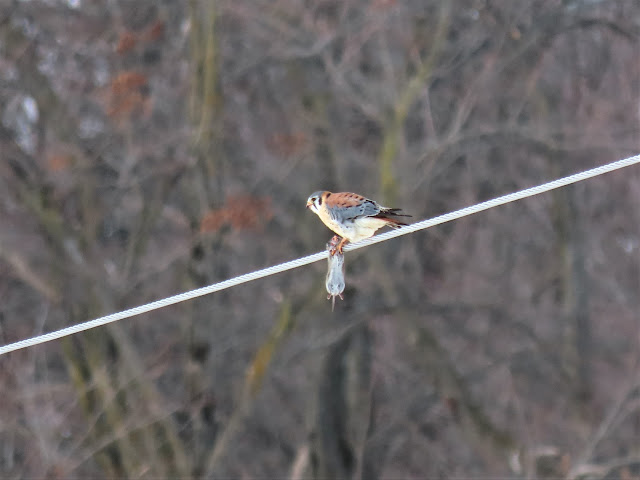 Our backyard
One might be forgiven for concluding that birds in the backyard have put on a special effort to keep us entertained during lockdown, for they have been numerous and, of course, are close at hand.
One of the most pleasing of recent events is the presence of a male Red-bellied Woodpecker as a regular visitor. 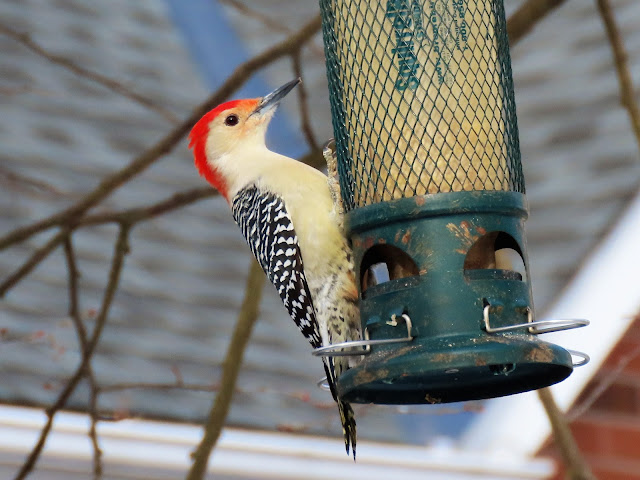 It is not the first time a red-belly has graced us with its presence, but this one seems to have found everything entirely to his liking and we see him quite often.
A couple of Hairy Woodpeckers (Dryobates villosus) have similarly found that the Gascoigne/Bauman Café is a fine place to dine. 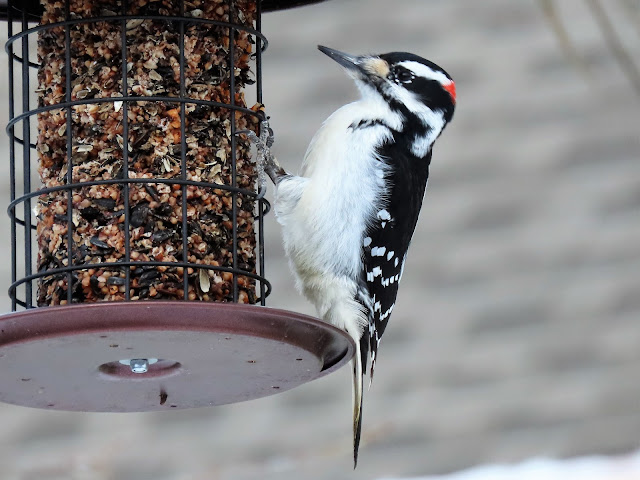 As many of you will know, Hairy Woodpecker bears a strong resemblance to Downy Woodpecker, but is larger, with a longer, more robust bill. Some find it hard to differentiate the two species without seeing them together, but in the case of the male, the back of the head is diagnostic. 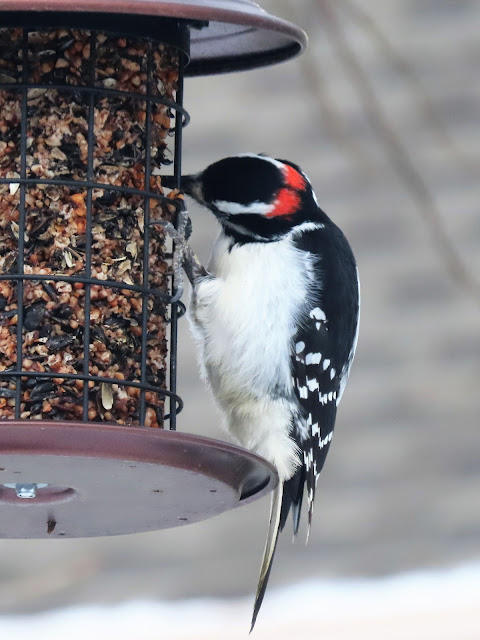 The red cap is broken on a Hairy Woodpecker, on a Downy Woodpecker it is continuous.
It is rare that we fail to see a Mourning Dove, almost from first light until the end of the day. Our highest count of late was twenty-one. 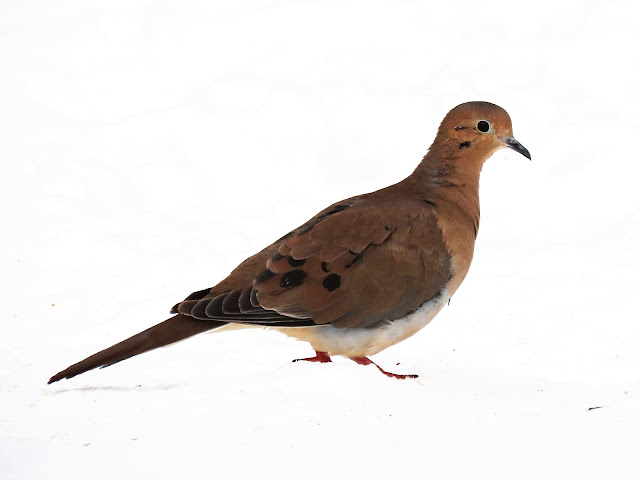 White-breasted Nuthatch is equally common although not in the same abundance as Mourning Doves. We routinely see two and from time to time have noted a third.

What would backyard bird feeding be without pesky squirrels to both distract and entertain, to give you fits, and moments of unalloyed delight? 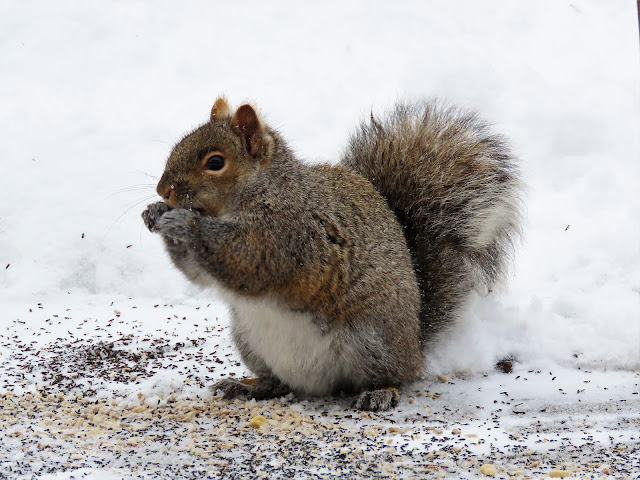 Let me leave you with a few more images of Red-bellied Woodpecker, a species named no doubt by a drunken taxonomist with a perverse sense of humour.
A red belly is hardly its most prominent feature! 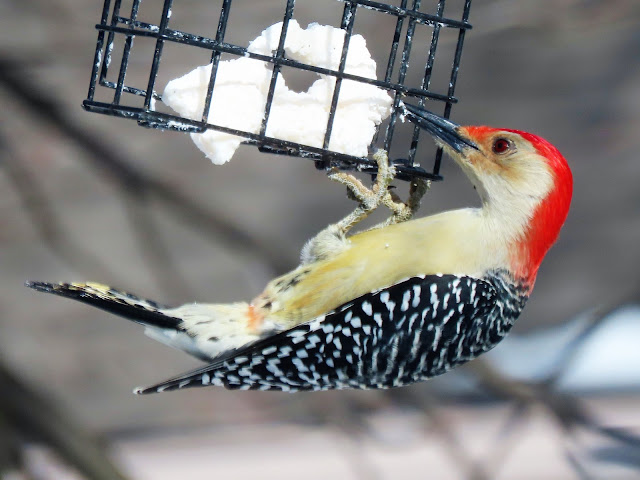 That little smudge you see is apparently what passes for a red belly.
Ah well, the suet tastes good.

And it helps a fellow get by on a cold winter's day.
We will have to see what other pictures and bon mots we can bring you next time. I am beginning to think another drive through the hinterland is called for.
So long for now.....
Posted by David M. Gascoigne, at 04:00