The lockdown in Ontario has just been extended so the opportunities to get out birding are significantly restricted. In addition, as I start to compose this post (26 January), we are experiencing our first major snowfall of the winter, and by the time it is all over I expect there will be lots to shovel! The conditions are certainly not conducive to drives through the countryside.
Being confined to the house has not been entirely disagreeable, and I have been quite happy reliving my Australian experiences and I am eager to share with you, again, some of that continent's superb species.
In no particular order, and without regard to taxonomic sequence, here are six remarkable Australian birds.
Cape Barren Goose (Cereopsis novaehollandiae)
You would be hard pressed to find a more handsome goose than Cape Barren Goose, but in many respects it flies in the face of all that we know about geese. It is of ancient origin and has only partially webbed feet; unique among waterfowl, copulation takes place entirely on land and there are no pre-copulatory displays involving water at all. In fact Cape Barren Goose seems to shun water most (if not all) of the time and we never saw a single bird enter the water. 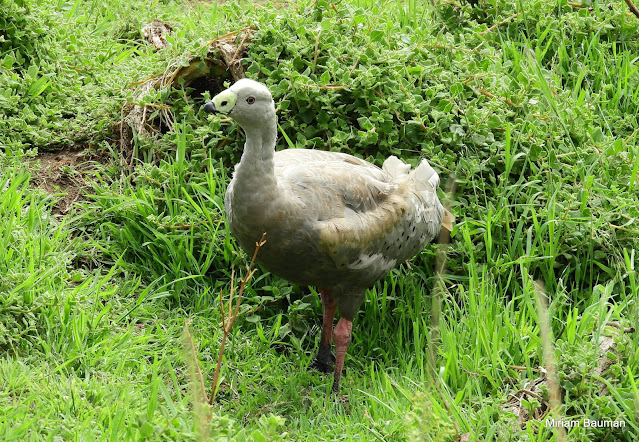 Both sexes utter a pig-like grunt and one of the vernacular names for this species is Pig Goose.
Cape Barren Goose was common on Philip Island, VIC, verging on abundant in some spots. Many adults were chaperoning recently arrived young, and it was charming to encounter them. 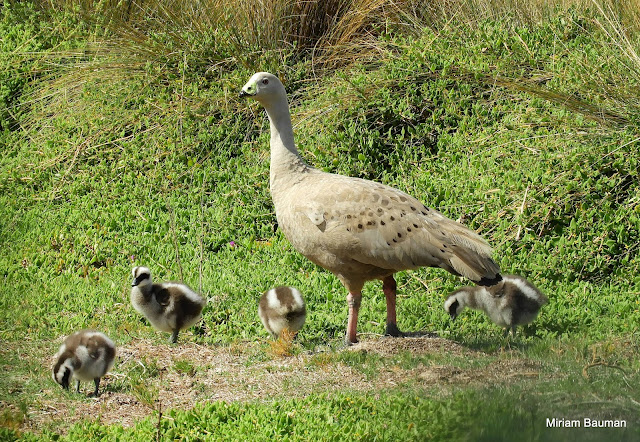 Ducklings and goslings of all species are at the top of the avian cuteness index, but one might be forgiven for concluding that Cape Barren goslings take first prize. 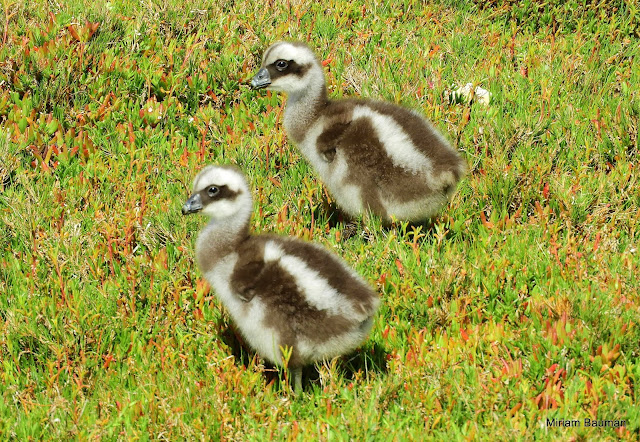 I owe a great debt of thanks to Stewart for taking us to see these treasures, and sharing with us his intimate knowledge of many great birding spots on Philip Island. 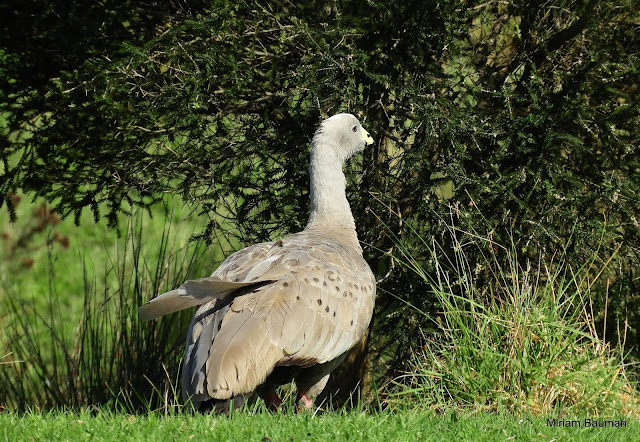 As I look across from my desk right now I can see a flight feather that I collected at the time. One feather doesn't make a goose, but it will have to suffice for now!
À la prochaine mes amis!
Channel-billed Cuckoo (Scythrops novaehollandiae)
This huge monotypic cuckoo is unlike any other cuckoo in Australia.
We were very fortunate to it see on our first day in Sydney when we visited the Royal Botanical Gardens. 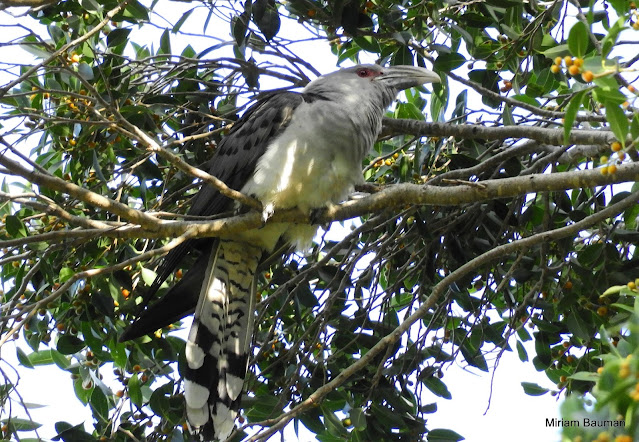 We were alerted to its presence by the noisy racket of agitated Pied Currawongs (Strepera graculina). This cuckoo, which will lay as many as five eggs in the nest of its host species, favours large songbirds roughly of its own size, currawongs and Australian Magpies (Gymnorhina tibicen) principally, as the host for its eggs and the future care of its young.
As if in confirmation of this fact, Australian Magpies thronged together with the currawongs to mob the Channel-billed Cuckoo, much in the manner of the cavalry bringing in reinforcements! 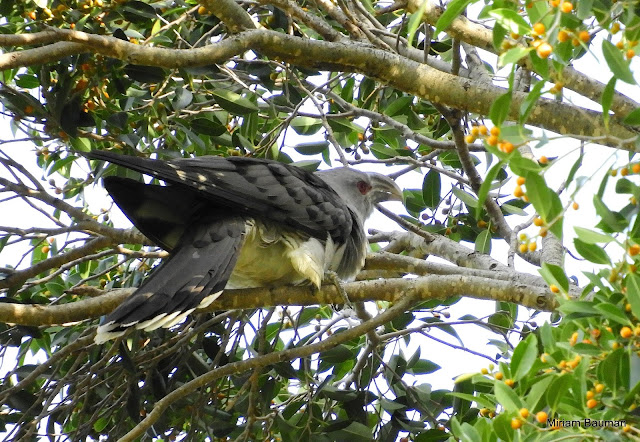 The combined assault of the currawongs and magpies succeeded in driving off the nest vandal, but it had been a wonderful experience for us to witness.       Drama of this nature plays out daily, but it frequently goes unnoticed. We were happy to have had a front row seat to the performance!
Pied Currawong (Strepera graculina)
Doubtless many of you are now saying, "What the heck does a Pied Currawong look like"? Well, let me show you. 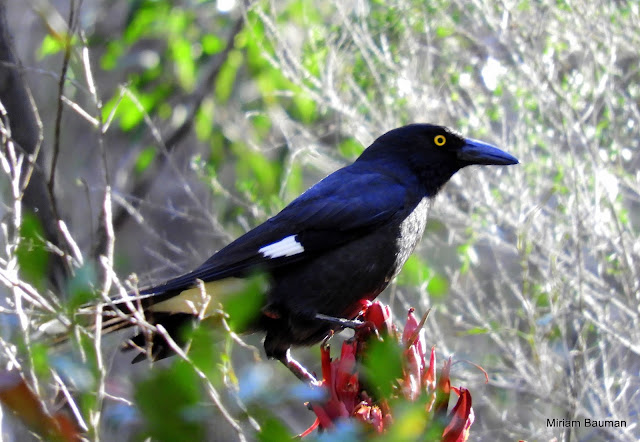 It is a large bird, about the same size as an American Crow (Corvus brachyrynchos) and is widespread throughout the eastern regions of Australia from the tip of Cape York to the westernmost part of the State of Victoria. 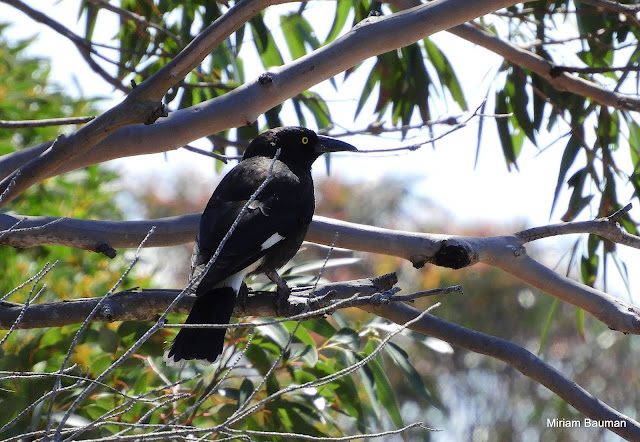 It is bold, and has habituated to a wide range of habitats, including cities and other zones of human habitation.
It flies with a deep, flapping wingbeat, and it did not take us long to recognize a bird in flight. Rarely did a day go by without the company of currawongs. 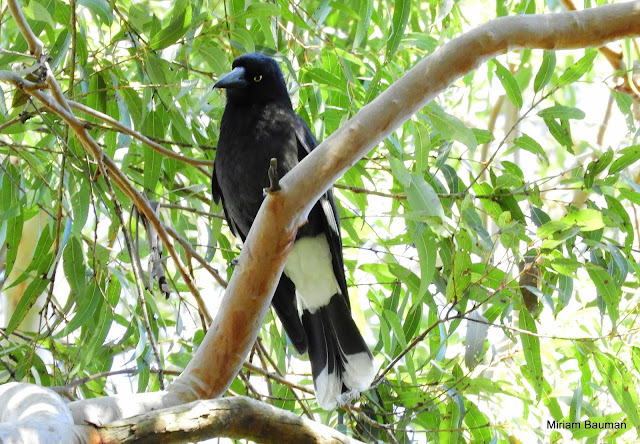 This common Australian bird contributed in no small measure to our enjoyment of the marvelous and unique avifauna of Australia. Every sighting was special for us.
New Holland Honeyeater (Phylidonyris novaehollandiae)
Few birds charmed us more than New Holland Honeyeater. It is impossible to overstate the joy we derived from this enchanting little bird. 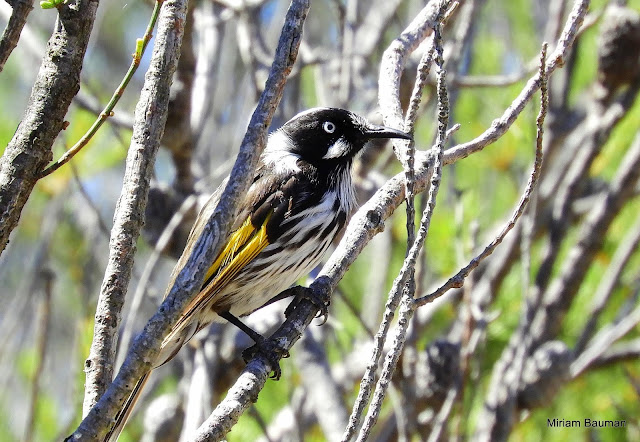 It was the most common honeyeater throughout our stay in Australia and we saw it most days throughout the three states we visited. 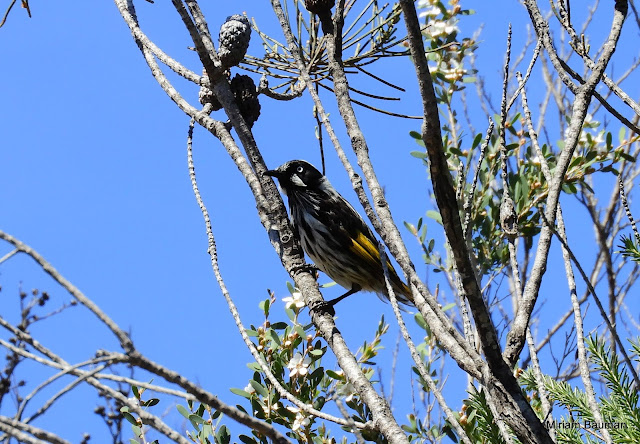 If there was one bird we came to take for granted, in the way that one might become blasé here about American Goldfinches (Spinus tristis), New Holland Honeyeater would have been it. 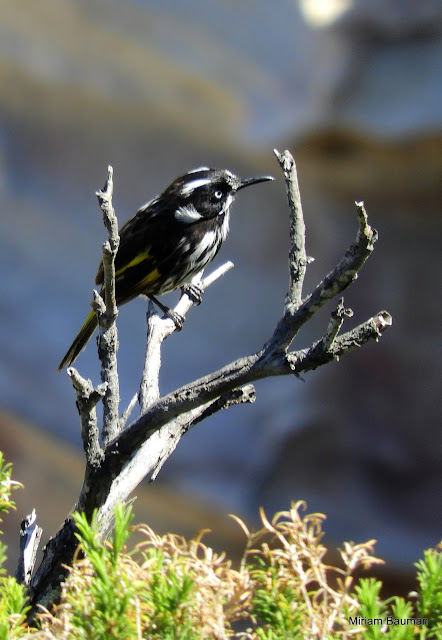 It's not that we ever failed to appreciate it, and it enlivened our days without exception. 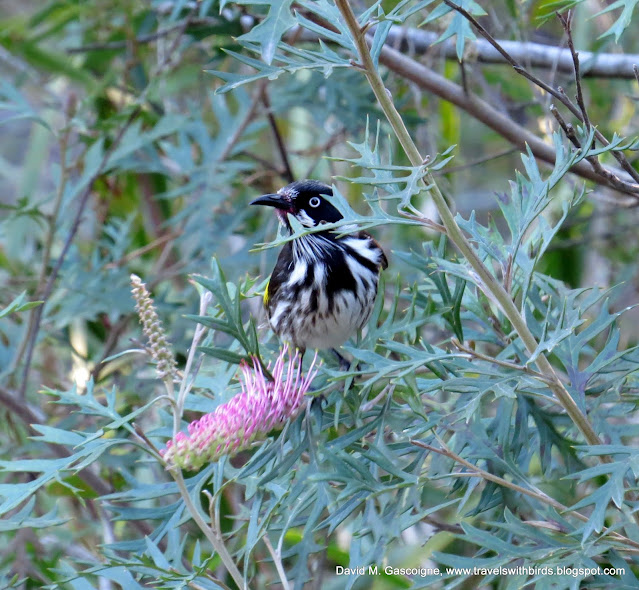 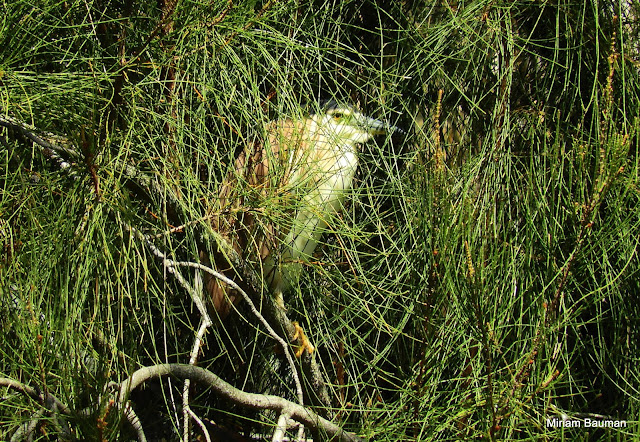 But several individuals were present and had no inclination to hide from view. 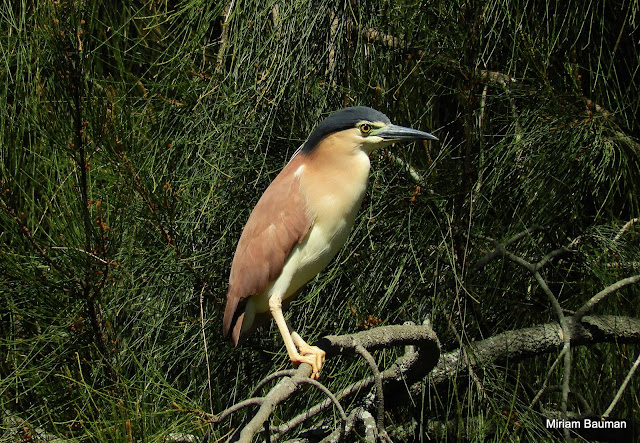 This bird was formerly know as Rufous Night Heron, and that name does seem to fit the bird well.
It is widespread through Australia, only being absent from arid areas, and its range extends to Indonesia, New Guinea, the Philippines and various Pacific islands and archipelagos.
We could not make up our minds whether this individual was agitated or seeking to impress the female of his choice. 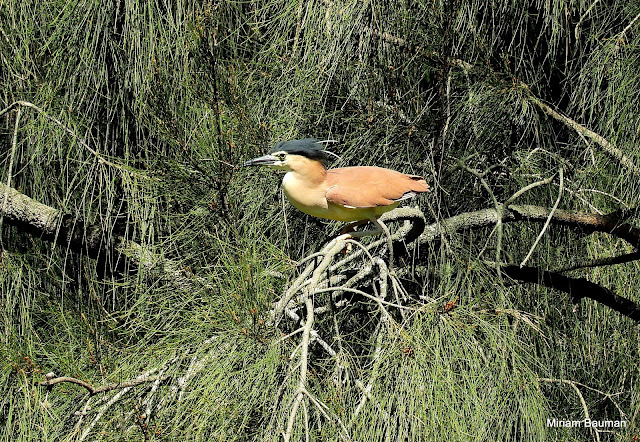 Miriam and I both agreed that it was a perfectly wonderful encounter and one that leaves us with warm memories; the photographs help to rekindle them.
Eastern Yellow Robin (Eopsaltria australis)
Australian Robins (Petroicidae) possess a charm that is hard to beat.
Eastern Yellow Robin was the species we saw more than any other, and this individual was spotted as we were standing looking at the Nankeen Night Herons. 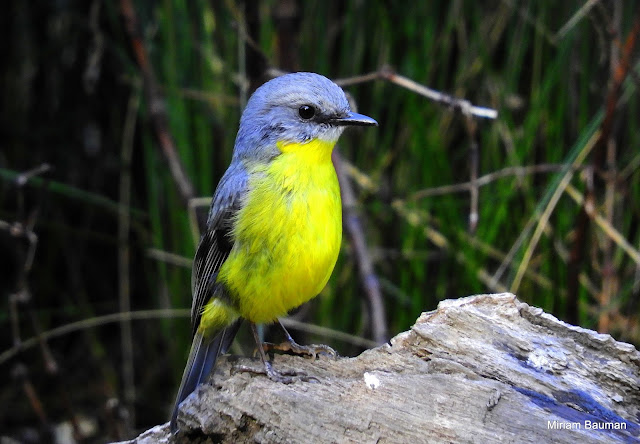 It did not stay for long, but during the time it was there it was very obliging in terms of photography. We saw this species on several other occasions but never as well positioned as this individual. 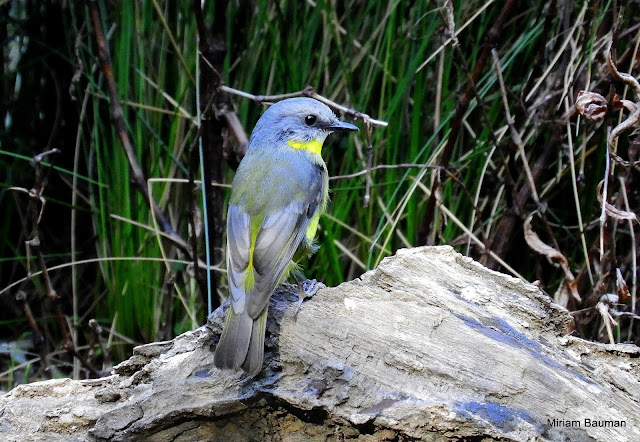 As you may see the greyish/blue back transitions to olive green and when the bird flicks its wings the effect is sensational.
Its range covers virtually the entire span of eastern Australia, where it may be found in habitats ranging from open forests and woodland to coastal and acacia scrub.
It was always a special moment for us to spend our time in the company of this uniquely Australian bird.
I initially turned to this retrospective of Australia as an antidote to the enforced confinement brought about by COVID, but I confess that it is giving me a great deal of pleasure to relive a fabulous journey to this land of discovery. I have no doubt that more episodes will follow.
Posted by David M. Gascoigne, at 16:00