Participants: Miriam Bauman, Shirley Bauman,  Robert Bezeau, Jim Bowman, Alice Buehrle, Roland Buehrle, Lynn Conway, Dan Daly, Justine Heinrichsberg, Peter Rasberry, Don Thomas, Henriette Thompson, Mary Ann Vanden Elzen, Mary Voisin
(There are several others whose names I did not record; some of them people I met for the first time. Please pass on this report if you know them and have them get in touch so their names can be added).

When we left the house it was minus 12.5°C, the sun was shining, and there was barely a breath of wind. What could be more perfect for a mid-January nature walk in southern Ontario?
We arrived at the trail head in good time and several eager naturalists were already waiting for the walk to begin. 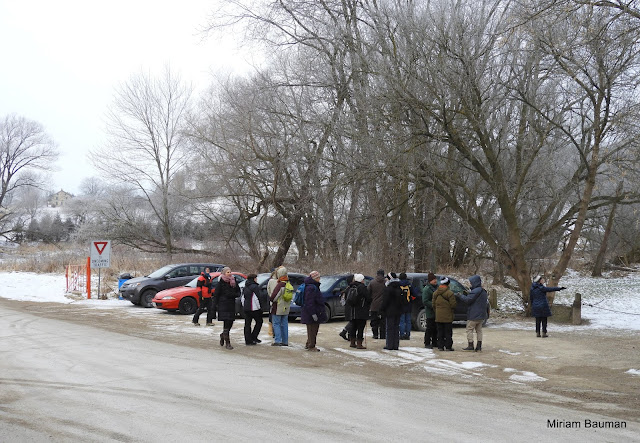 This is an area where it is easy to coax Black-capped Chickadees (Poecile atricapillus) to feed from your hand and as you can see Mary Voisin is already trying her luck.
While still waiting for the whole group to assemble, we were reminded that we are in Mennonite country. 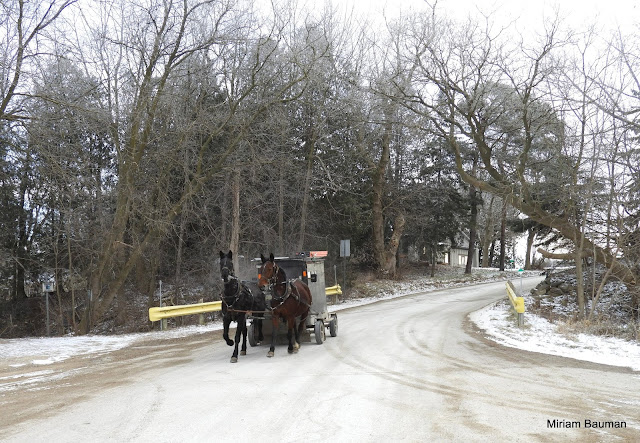 Upon entering the trail the scene that awaited us was suitably wintry. 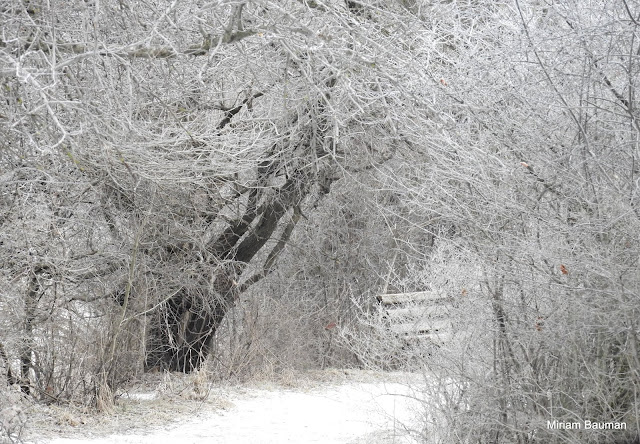 American Beavers (Castor canadensis) have been especially active this year and this lodge is coming right up onto the path. 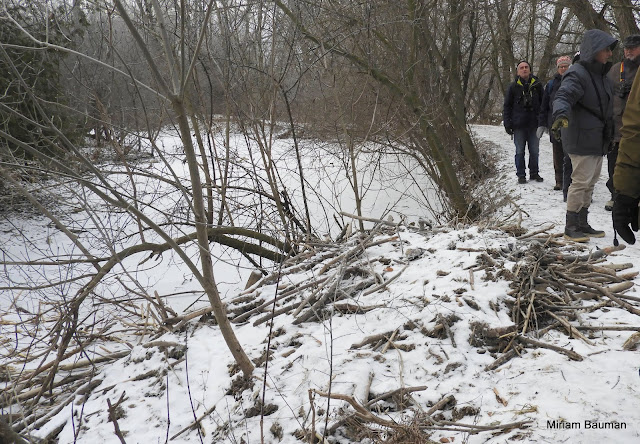 The bird life was pretty active and there was much to see. At times our group got strung out a little but I think that by regrouping as necessary most people got a chance to observe all the various species we encountered. Everyone was keenly interested and there was often a lively discussion. 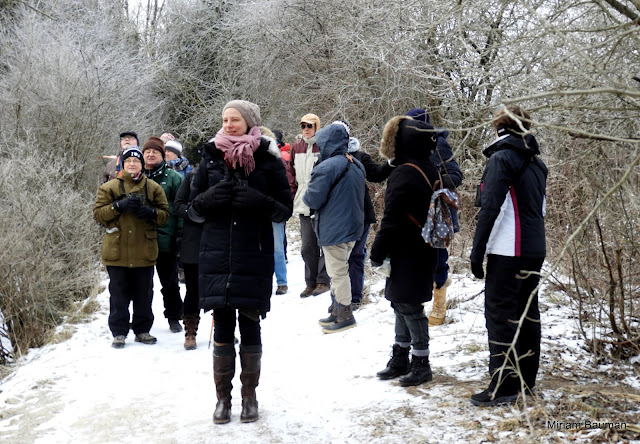 It appeared that someone had sat on this bench and strewed seed around it and beneath it, and a male and female Northern Cardinal (Cardinalis cardinalis), and a Black-capped Chickadee were feeding on the ground. 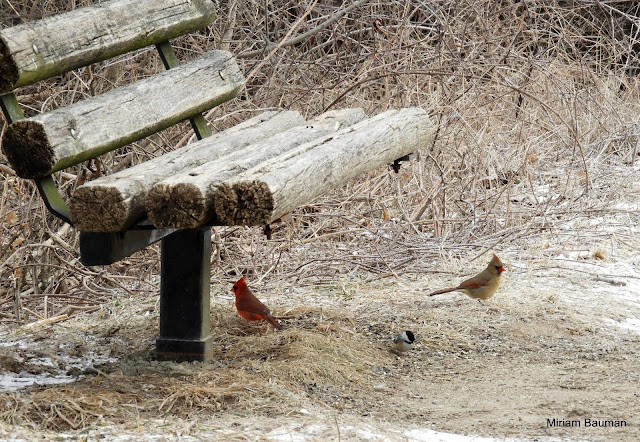 Shirley Bauman pointed out a couple of birds flitting around in some branches on the ice, and I saw a flash of yellow and called out "White-throated Sparrow." Jim Bowman said I should look again and that the birds were Golden-crowned Kinglets (Regulus satrapa). And he was right! You would think I would know by now not to make such hasty calls without fully seeing the bird. 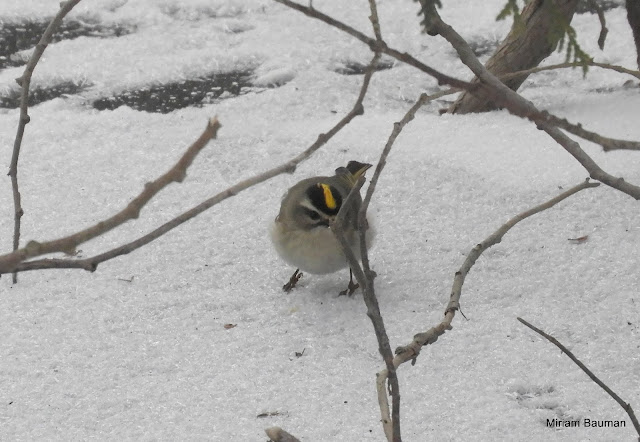 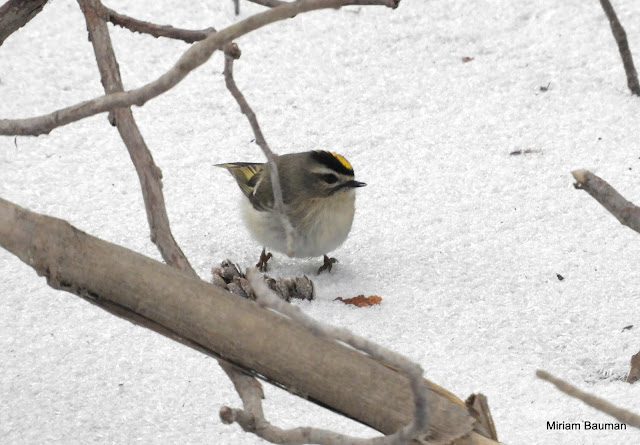 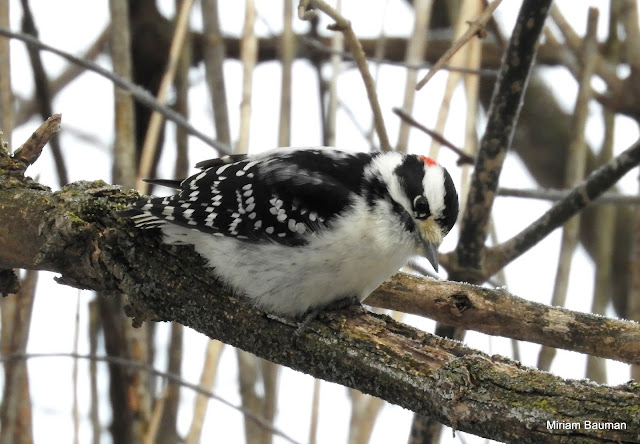 Without doubt Black-capped Chickadee was the most common species. 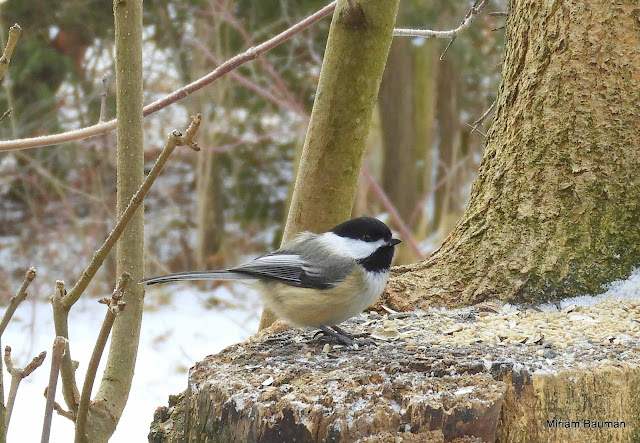 This species has certainly come to know that friendly humans bring food, and the birds start to appear all around you as soon as you begin your walk. Many people seem to leave seed for the birds and as you can see in the picture above, this stump was well provisioned.
Don Thomas kindly permitted me to use the following images portraying the joy of feeding a wild bird and having it alight on your hand, confident that it will come to no harm at the hands of this group of humans at least. 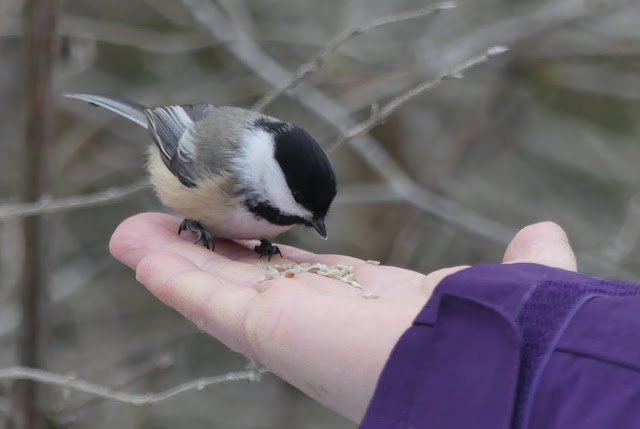 One of the attractions of a walk along the Mill Race is that the Eco Café is at the St. Jacobs end of the walk, and on a day like today, it is very pleasant to stop in for a coffee (and a muffin perhaps) and warm up and recharge before heading back along the trail to our vehicles. The chance for warm, clean, well-stocked washrooms is also a factor, especially for the ladies, for whom the need to go in the bush is decidedly unappealing at 12 degrees below zero! 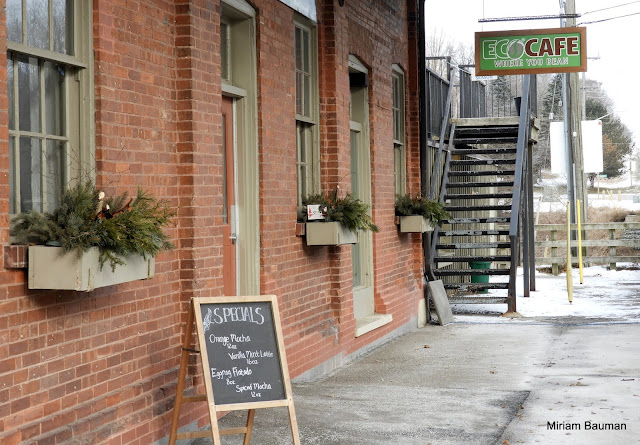 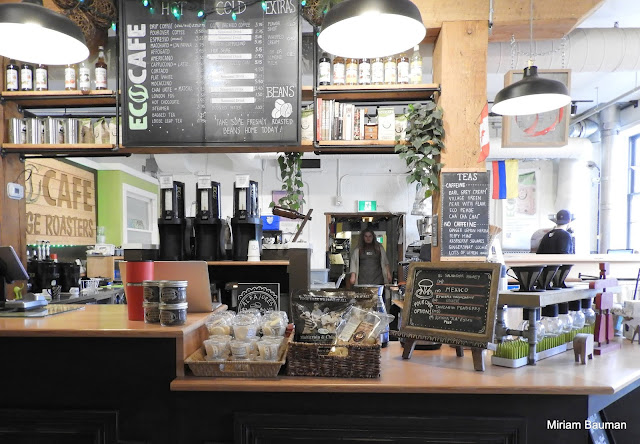 American Tree Sparrow (Spizelloides arborea) has been quite uncommon this winter so we were very happy to run into a couple of them on the way back from the café. 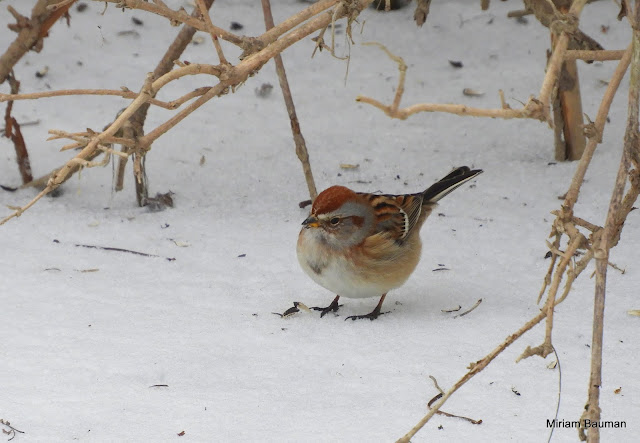 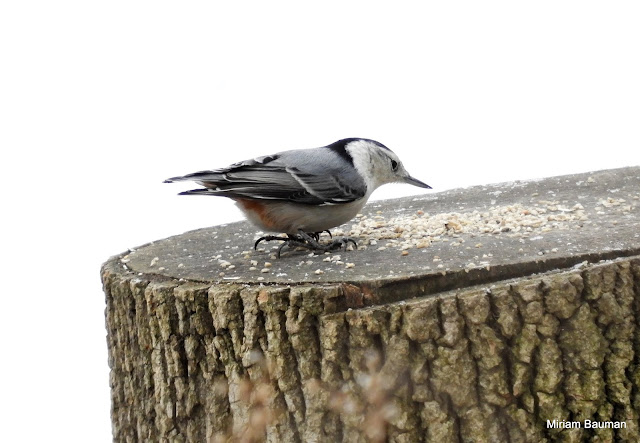 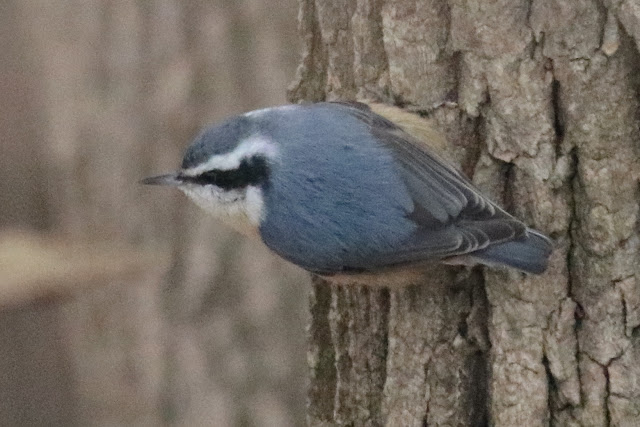 I am indebted to Jim Bowman for the shot of the Red-breasted Nuthatch. Jim also provided the following shot of a White-throated Sparrow. 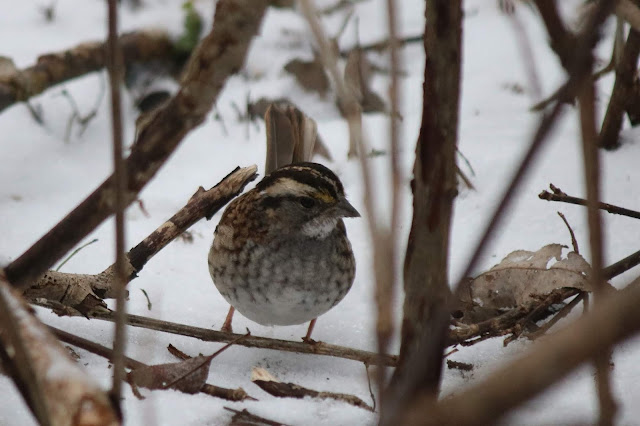 I doubt that you would get much argument from anyone, especially at this time of the year when many species are not present, that Red-bellied Woodpecker (Melanerpes carolinus) is the most handsome of the four woodpeckers you might encounter. 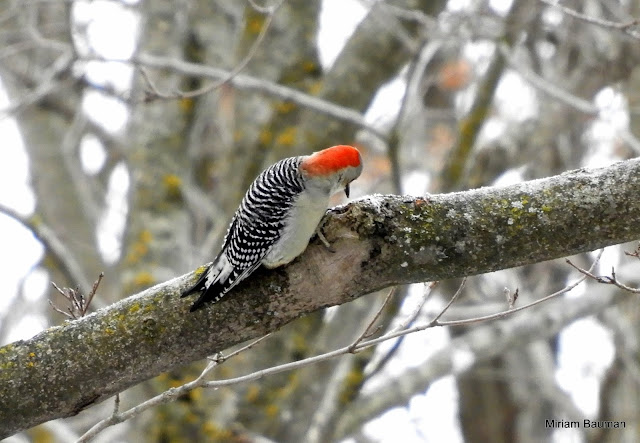 This male Downy Woodpecker is handsome too, but he does not quite match the brilliant elegance of the Red-bellied male shown above. 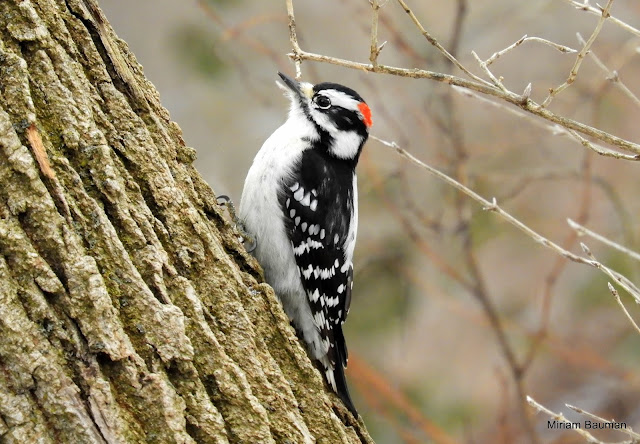 Grey Squirrels (Sciurus carolinensis) were active throughout the woods and were attrtacted to the trail by the copious quantities of bird seed there for the taking. 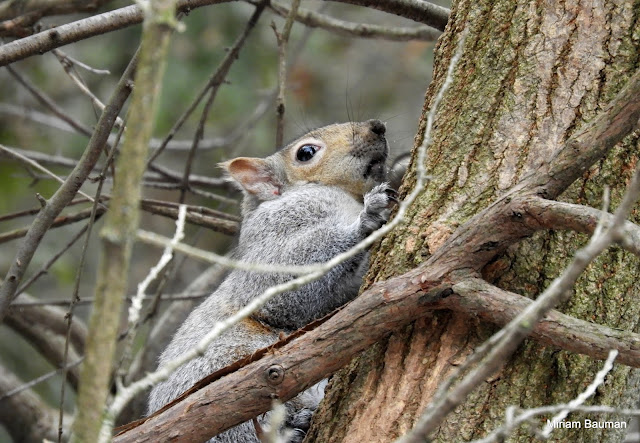 Several people had marched ahead and had left by the time we got back to the end of the trail, but this is a group shot of those who remained.