Horned Larks (Alouette hausse-col) in the snow, and in other stuff too.

Today was not the kind of day one looks forward to when going birding - but I went anyway! It was very cold and the winds were fierce, so the combination of weather and wind chill meant it was not a day for the faint of heart. In the rural areas the snow was being whipped into drifts so the driving was sometimes treacherous also.
My search was for the classic winter species in our area and I was not disappointed. Initially the area seemed barren of birds, but then I saw what I was pretty sure was a flock of Snow Buntings Plectrophenax nivalis on top of a barn roof. As I drove towards the farm where the barn was situated, more Snow Buntings started to lift off the road and the adjacent fields. In total I estimated there were about three hundred birds.
None of the pictures in this post are very good, but the conditions were simply appalling and this is the best I could do, shooting in poor light through driving snow. The barn was also seventy-five metres or so from the road.
As you can see in the images below, some of the Snow Buntings burrow right into the snow. 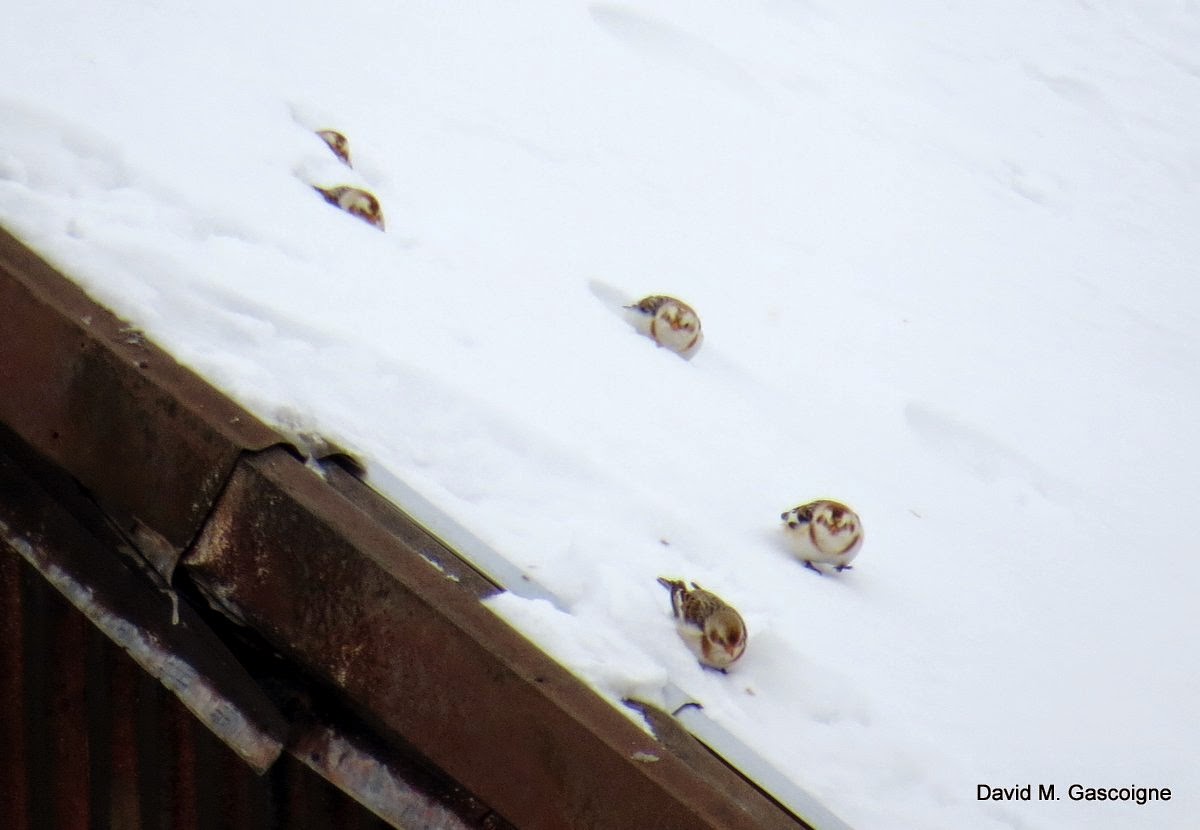 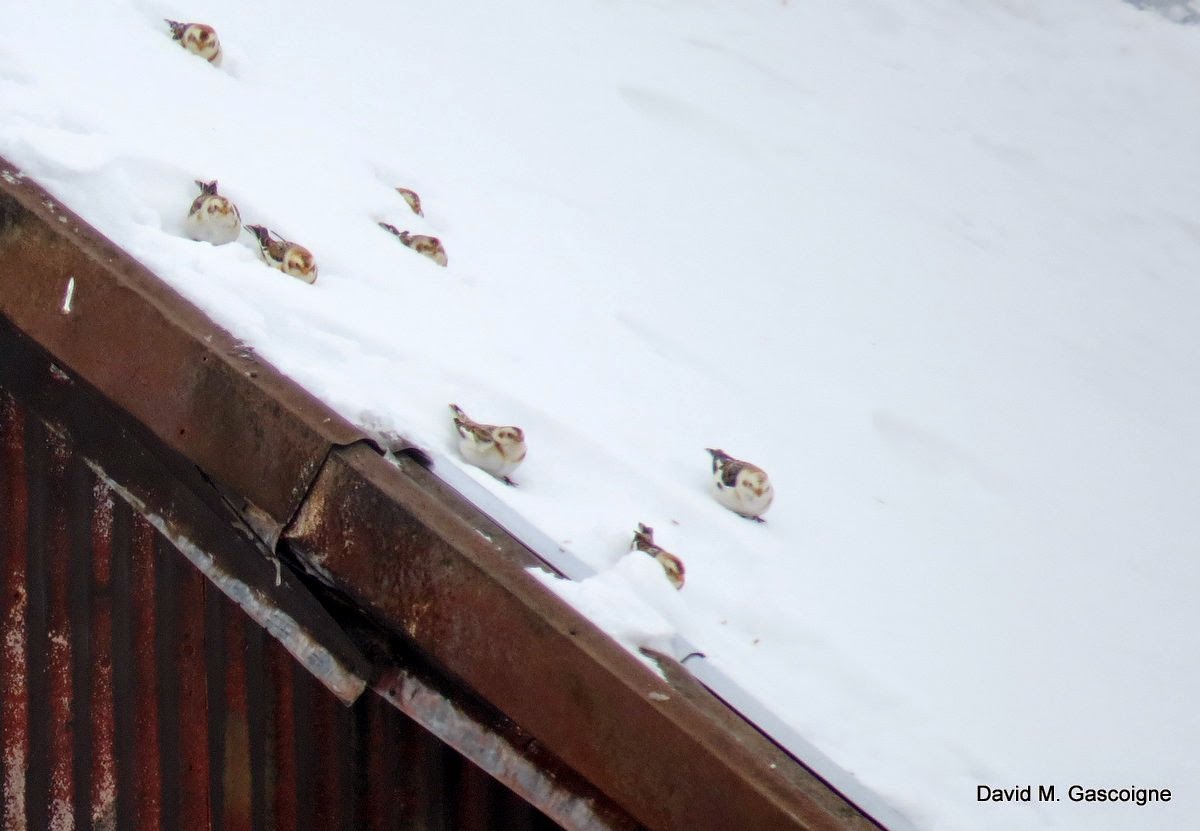 After spending about twenty minutes patiently searching through the flocks of Snow Buntings, searching without success for a Lapland Longspur Calcarius lapponicus, I drove a little farther along the perimeter of the farm fence.
Almost immediately I spotted a couple of Horned Larks Eremophila alpestris
hunkered down in the snow. 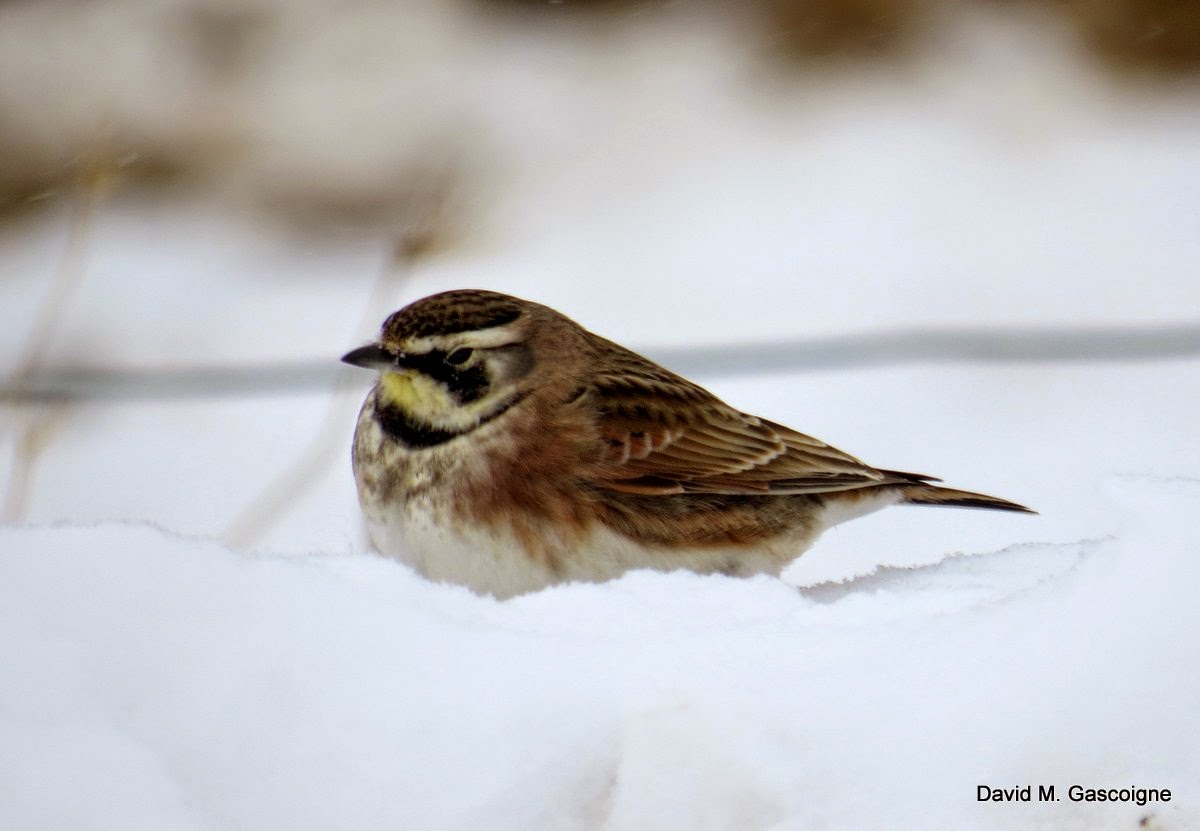 Then my attention was drawn to a good deal of activity taking place on a dung pile which was sheltered somewhat from the snow since it was located on the leeward side of a barn.
There about thirty Horned Larks were feeding continuously as were Snow Buntings, House Sparrows Passer domesticus and Rock Doves Columba livia.
These pictures, poor though they may be, give an idea of the concentration of larks on what was obviously a productive food source. 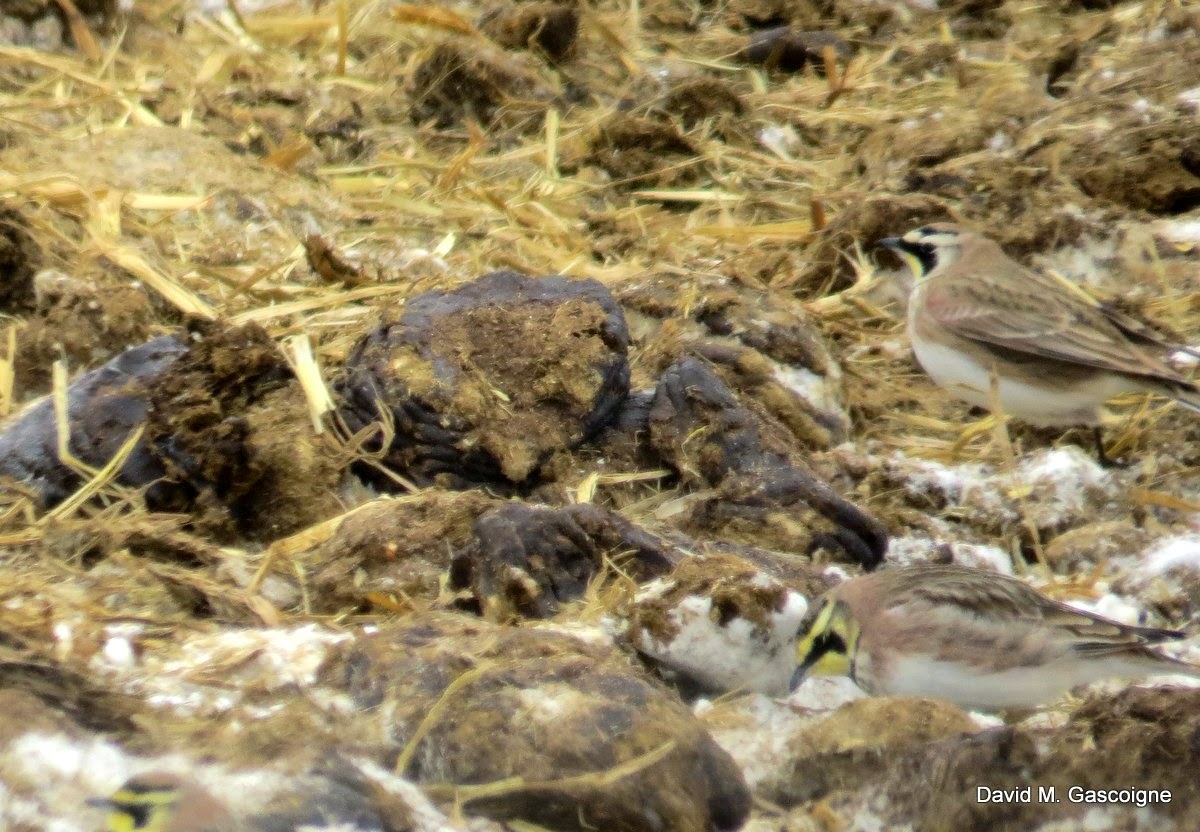 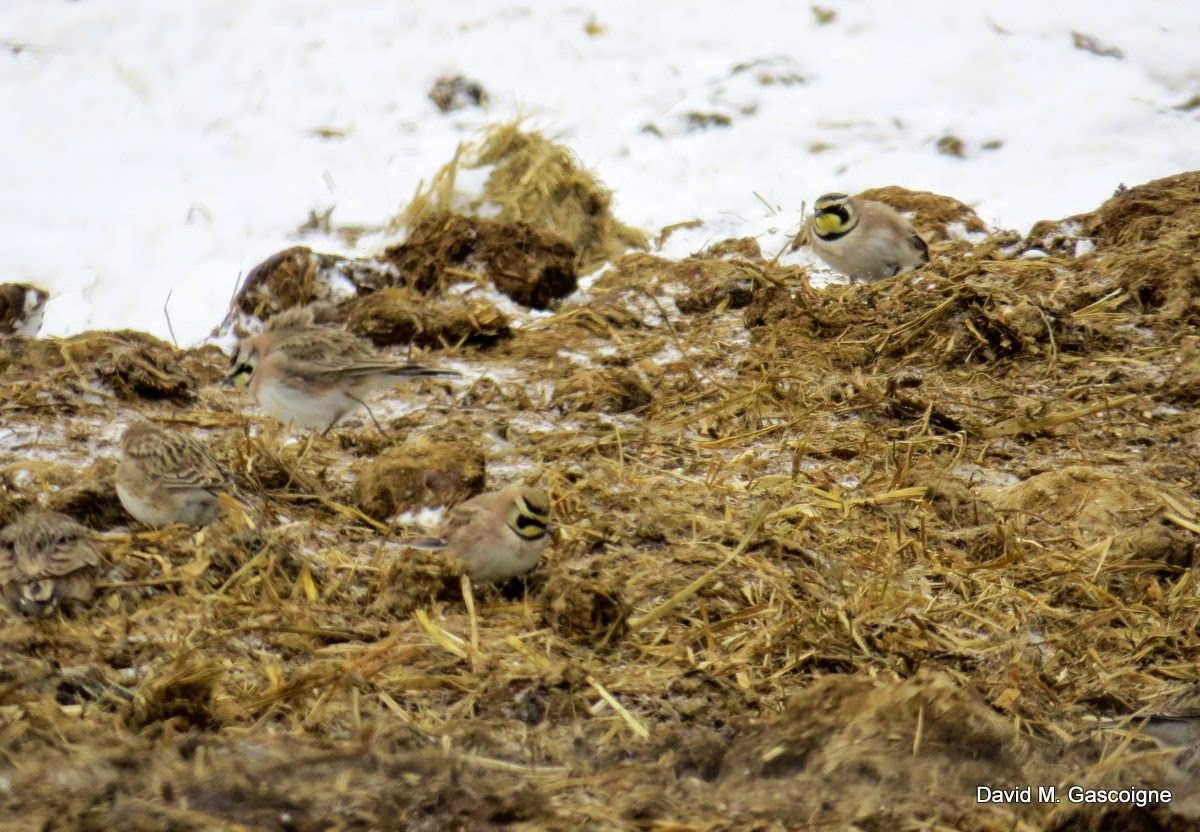 The following shot shows a Snow Bunting, and behind it a Rock Dove. 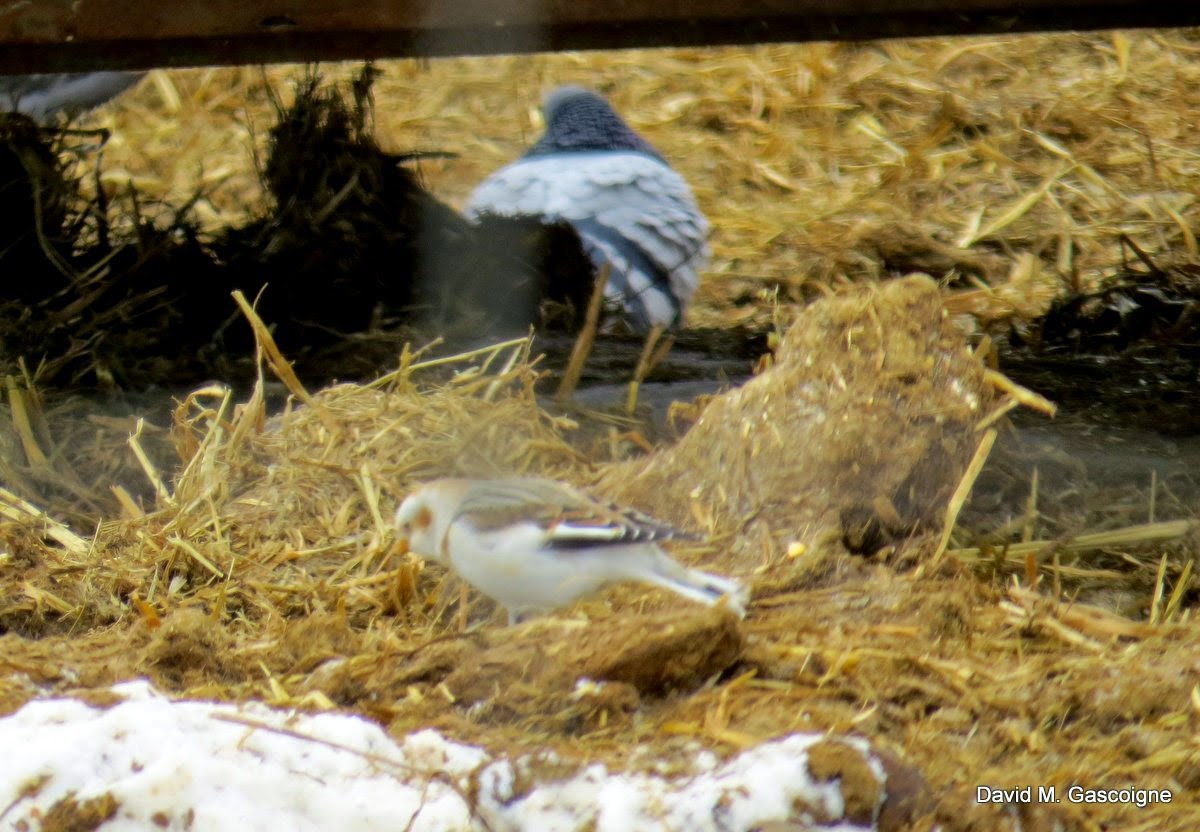 The predominant species, however, was Horned Lark and it was a bit of a mystery to me why the majority of the Snow Buntings were gleaning whatever morsels they could find in the windswept fields and were ignoring what was obviously more readily available food. 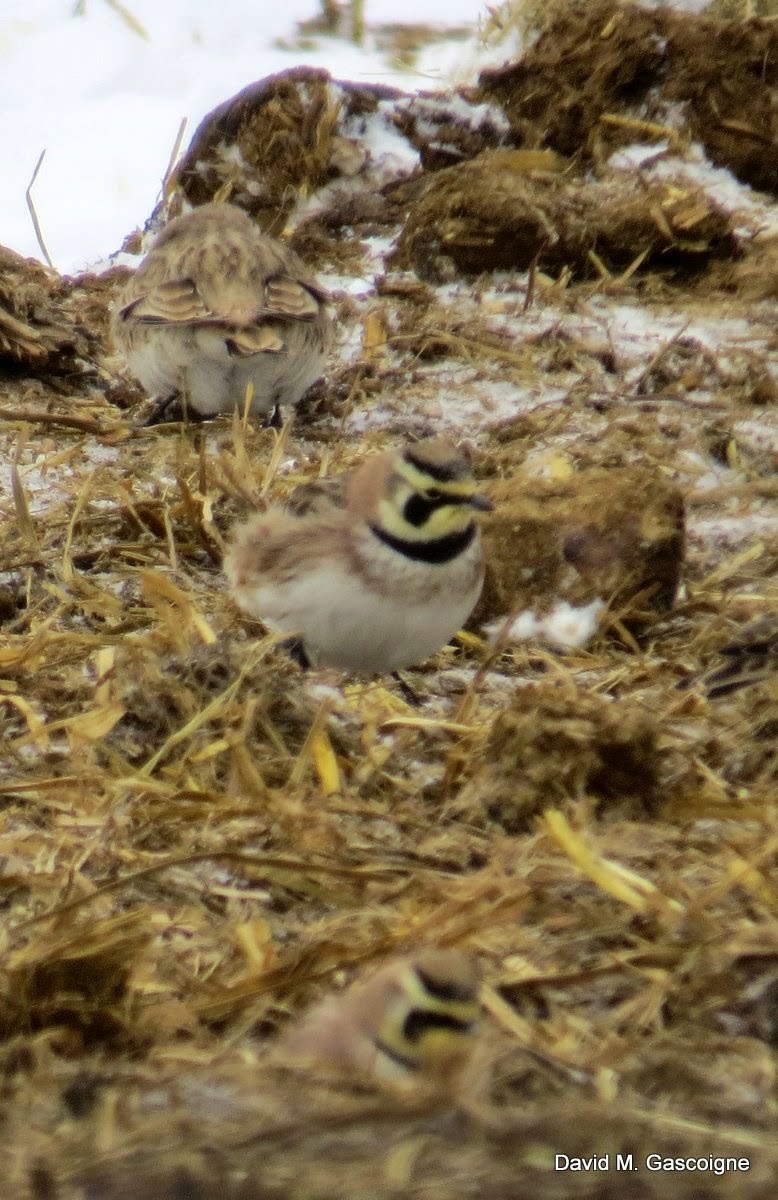 The weather was pretty awful, and the road conditions far from the best, but it perhaps added to the satisfaction of enjoying these winter warriors. It was an hour well spent.
Posted by David M. Gascoigne, at 19:08