While driving along Three Bridges Road in Wellesley Township my wife and I spotted the adult Red-tailed Hawk pictured here and remarked that it seemed reluctant to flush even when we stopped to take a photograph. Usually it seems to be an automatic corollary that the moment we stop the car, or even slow down, the bird flies away.
We quickly noticed the carcass of an animal in the field at the edge of the road, no more than a few metres from the road itself. We could not then, nor have we been able to since, identify the animal. At first glance it seemed like it might have been a rabbit or a hare but it was too big for either one. The hawk in the tree steadfastly maintained its position as we examined the body and took a couple of pictures. As we moved back to the car a second adult Red-tailed Hawk flushed from the ground almost directly below where the first hawk was perched. We went to see what might be on the ground and located the large carcass now stripped down to bone and residual flesh.
It seems very unlikely that either victim could have been taken down by a Red-tailed Hawk but we can only conjecture what may have caused these two deaths. The large animal might perhaps have been the prey of a coyote,  having been abandoned when the coyote was satiated. As for the second animal we are hard-pressed to come up with anything.
Red-tailed Hawks are generally solitary at this time of year and we assume that the presence of such a bounty of food would have led them to tolerate each other's presence in close quarters. 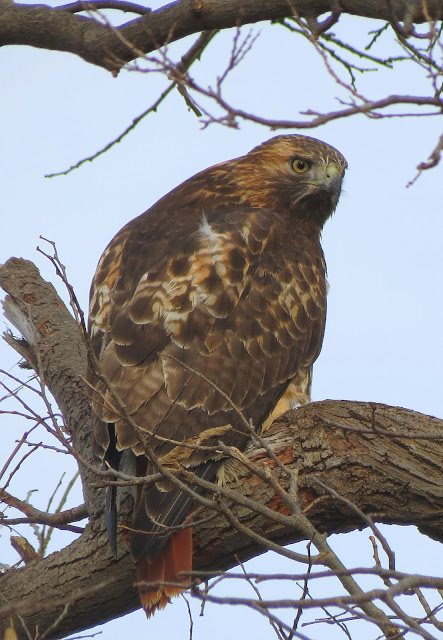 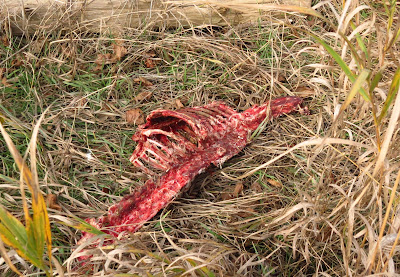 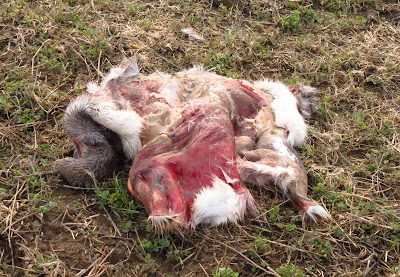 I have witnessed an adult Bald Eagle in this area also; no doubt it would not hesitate to scavenge on this feast.
If anyone reading this post has any ideas as to what the creatures might be or even how they might have met their demise I would be very interested in hearing from you.