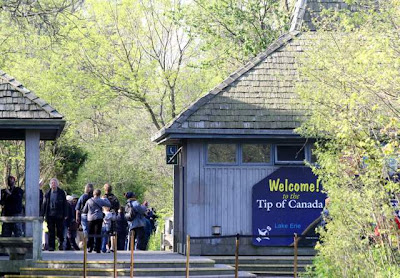 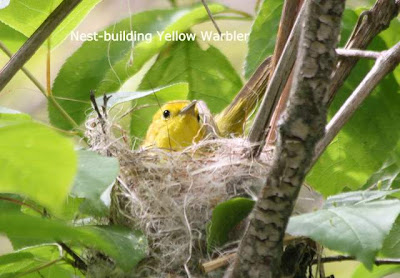 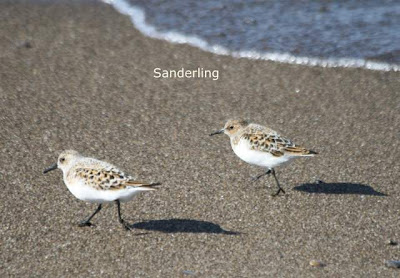 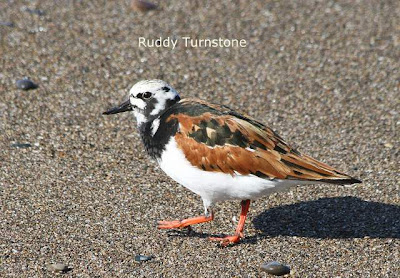 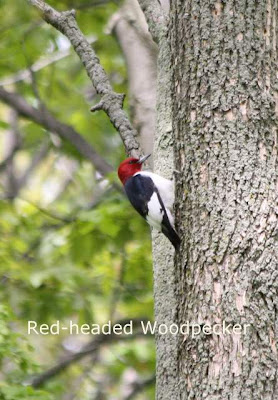 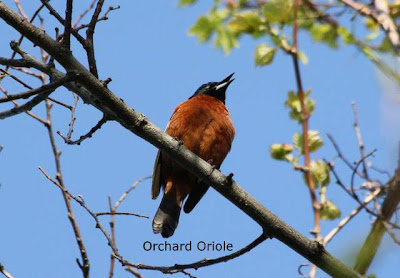 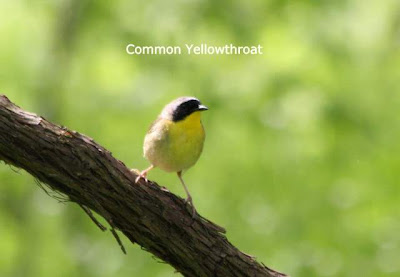 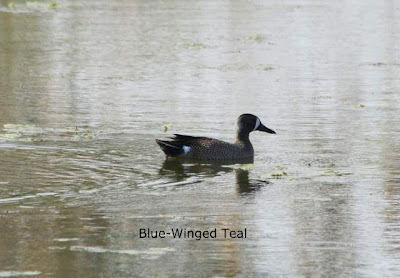 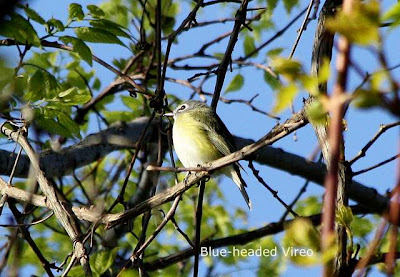 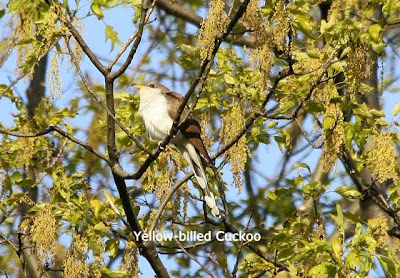 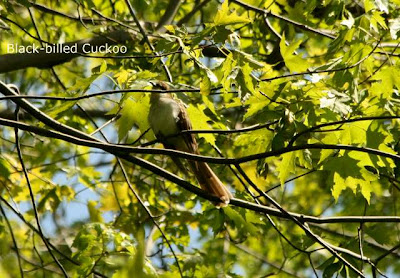 
We checked into the Comfort Inn ($121.43 per night plus taxes) and immediately headed out to Hillman Marsh.
Compared with previous years the birds there were quite sparse, especially as far as waterfowl and shorebirds were concerned.
However, we spent a pleasant couple of hours meandering around before going back to the Comfort Inn to enjoy the dinner we had brought with us.
We had a fine Quebec cheese, Le 1608, one of our favourites, with rice crackers, accompanied by a chickpea and feta cheese salad. Dessert comprised a variety of fruit. All was washed down with an Argentian Fuzion Shiraz.

Visitor Centre to the Tip

When we last stayed at the Comfort Inn two years ago, we requested a wake up call both nights, but on neither occasion did it materialize the following morning. We had a repeat of this experience this time. I have no idea why it is so difficult for the staff to organize a simple wake up call, but obviously it is an obstacle too difficult to surmount over a two year interval. I think that next time we’ll give the Day’s Inn a shot to see if they can do a little better.
After partaking of the continental breakfast we left for Point Pelee National Park, arriving at the entrance at around 06:15h. There were not many other vehicles going in and we drove down to the Visitor Centre and parked in the main lot.
We decided to walk down to the Tip and were glad that we did. It was still cool but the sun was starting to provide some warmth and birds were active. The north shore of Lake Erie is the area of the province where one can reliably expect to see Orchard Oriole and we were not disappointed. There were several individuals moving around in the trees, gleaning insects roused by the rising temperature. Competition was provided by more numerous Baltimore Orioles and numerous Eastern Kingbirds sallied forth from the treetops to snatch passing prey. A couple of Swainson’s Thrushes provided our first sightings of the year for this species.
A male and female Wild Turkey were on the road, with the male in full display. The female seemed quite indifferent to his charms, but we enjoyed the ritual. This represents the first sighting ever for us of Wild Turkey in Point Pelee National Park.
We saw a pair of Mourning Doves on a nest. One (we assume the male) was sitting on top of the other, but there was no evidence of copulatory activity and they seemed quite content to rest in this fashion. We saw three Blue-grey Gnatcatchers, two Chestnut-sided Warblers, three Magnolia Warblers, a Black-throated Green Warbler, a Nashville Warbler, a Yellow-rumped Warbler, a couple of Black-throated Blue Warblers, two Red-eyed Vireos and a Philadelphia Vireo.
When we arrived at the Tip there was not a great deal of activity. However there was a lone Horned Lark on the sand and a group of about twenty Sanderling in different degrees of plumage, together with a stunning Ruddy Turnstone.
On the way back to get the tram we had a great look at a Northern Parula.

Following a visit to the gift shop at the Visitor Centre to pick up a tee shirt for our friend Alejandro Solano in Ecuador (we had promised to get one for him to add to his extensive collection of birding garb) we decided to walk the Tilden Woods Trail.
By now it was getting warmer and the walk was quite delightful. The highlight was two clearly seen Black-billed Cuckoos, one either side of the trail; we added Black-and-White Warbler to our parulid list. We also had the unbridled delight of two male Scarlet Tanagers. It almost seems as if the first sighting of any year is the first ever and it never ceases to amaze.

Following the Tilden Woods Trail we went over to the Marsh Boardwalk, always reliable for species not found in other areas of the park.
We were rewarded with four Black Terns, three Swamp Sparrows and Miriam heard a Marsh Wren. A Northern Harrier was coursing over the marsh and no less than eight Common Yellowthroats perched for us in full view.
Following our walk we had lunch at the café run by the Friends of Point Pelee. A wrap called a Green Goddess was very tasty indeed.

We took the shuttle down to the far point of the Woodland Trail and walked its length back to the Visitor Centre.
This trail, in times past has been quite spectacular and today rendered the only individuals of Red-headed Woodpecker, Brown Thrasher and Northern Waterthrush.
We found a Yellow Warbler sitting on a nest and another busily involved in nest construction. This bird had chosen its nest site right at the edge of the path but it seemed totally unconcerned at the foot traffic passing by. We are always amazed at the process of nest construction and we stopped to watch for a while.

This marked the end of our birding for the day. We returned to the Comfort Inn and had a glass of wine (Pelee Island Merlot) before heading out for dinner at Paula’s Fish House. Last year we had eaten here and quite enjoyed it. This year, however, the food was poorly cooked and expensive for what we had. We returned to our room, read for a while and turned in after a fine day of birding.

Following the continental breakfast at the Comfort Inn we left to head for Point Pelee National Park again, arriving at around the same time as the previous day.
On the way up to the parking area at the Visitor Centre we saw three Wild Turkeys on the road, one of which was a huge male strutting his stuff. How the females could display such indifference confounds me!

We decided to ride the shuttle down to the Tip and bird the area from the shuttle stop to the water’s edge.
It was a productive couple of hours and we added Orange-crowned Warbler, an unexpected Blackpoll Warbler, Palm Warbler and Wilson’s Warbler. A couple of Yellow-billed Cuckoos was a significant sighting.
After about two of hours of birding we returned to the Visitor Centre where we bought coffees from the food concession run by the Friends of Point Pelee and a huge birdseed cookie which we split. It was so delicious we got the recipe and are determined to make some at home.

This area was populated by so many Yellow Warblers we lost count. Sometimes we had five or six of them in view at the same time. It was a very pleasant walk and we added Eastern Wood Pewee and Downy Woodpecker to our trip list.

All species at DeLaurier Homestead and Trail - Turkey Vulture, Mourning Dove, Red-bellied Woodpecker, Downy Woodpecker, Eastern Wood Pewee, Eastern Kingbird, Tree Swallow, Grey Catbird, Yellow Warbler, Magnolia Warbler, Yellow-rumped Warbler, American Redstart, Common Yellowthroat, Northern Cardinal, Rose-breasted Grosbeak, Red-winged Blackbird, Common Grackle.
We returned to the Visitor Centre and patronized the Friends of Point Pelee once again for lunch. We both had sausage on a bun which had nothing to set it apart, but was adequate, and we were certainly happy to spend our money with this very worthwhile organization.

Return to the Tip

Since it was getting close to the time when we would need to depart, we once again rode the shuttle to the Tip and birded there for another hour or so. Other than species we recorded earlier we added a flock of about forty Purple Martins perched in a tree adjacent to the beach.

We left the park at about 14:00h and had an uneventful drive home. As always after a visit to Point Pelee, we felt we had enjoyed a fine weekend of birding and we ran into a few old friends and got caught up with each other’s lives.
Our three target birds eluded us, Cape May Warbler and Blue-winged Warbler for Miriam, Louisiana Waterthrush for both of us. Ah well, there’s always next year!