21 February 2021
A good friend of ours invited us up to her farm to see the large flocks of Snow Buntings (Plectrophenax nivalis) that have been visiting her of late, and we were happy to accept.  A chance to see the birds and catch up with our friend was not to be missed.
Actually, several flocks seem to coalesce into one concentrated mass, the corn laid out for them doubtless a factor in this behaviour.
First let me give you an idea of the number of birds (and none of these pictures captures all of them). 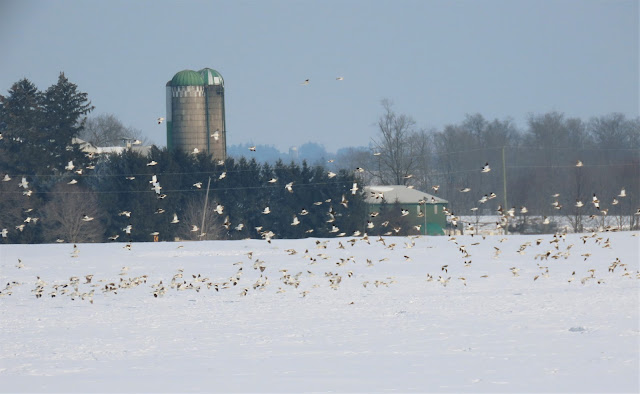 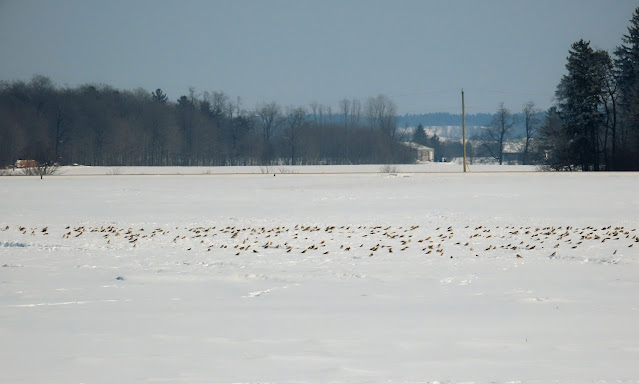 It is impossible to count them, but there are certainly several hundred. They are quite skittish and swirl into the air at the hint of any threat, real or imagined.
They are to say the least delightful little birds; on the snow..... 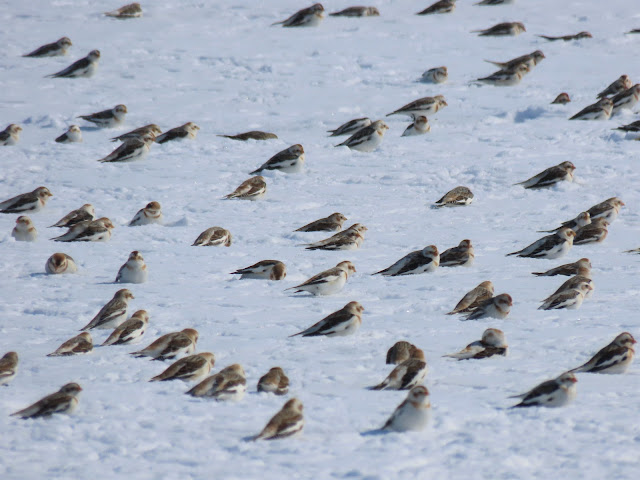 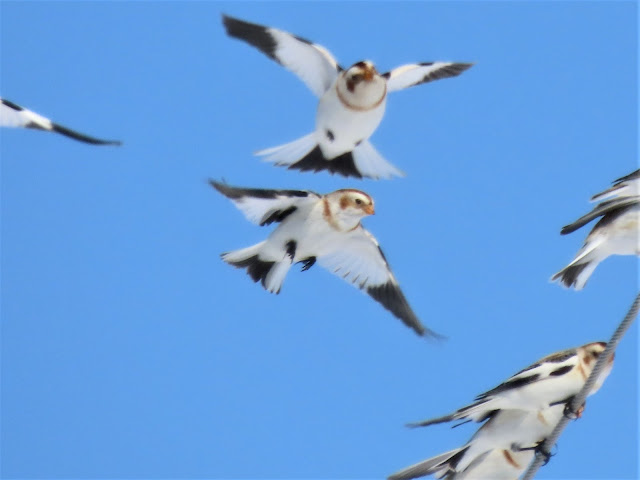 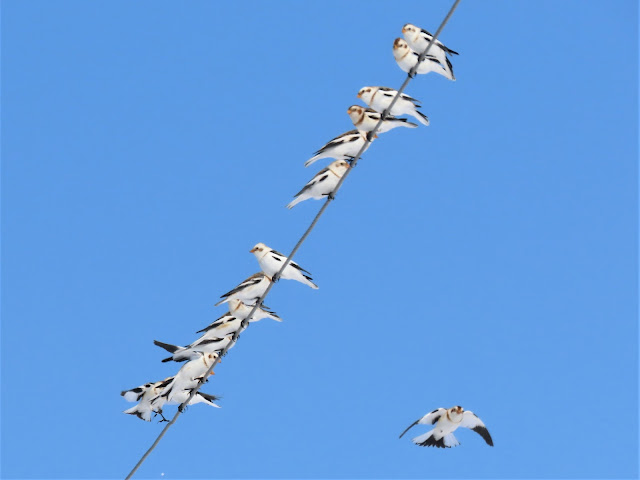 Common Redpolls (Acanthis flammea) too have invaded southern Ontario this winter, and they were not at all reluctant to approach us at close quarters. 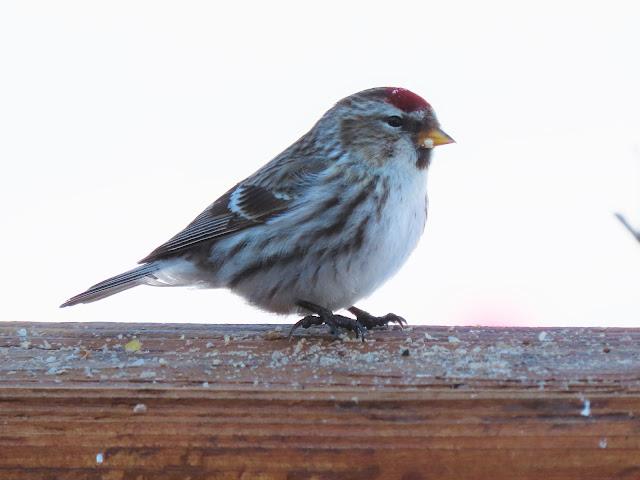 But for us, in a star-studded cast I might add, the Snow Buntings were the marquee attraction. 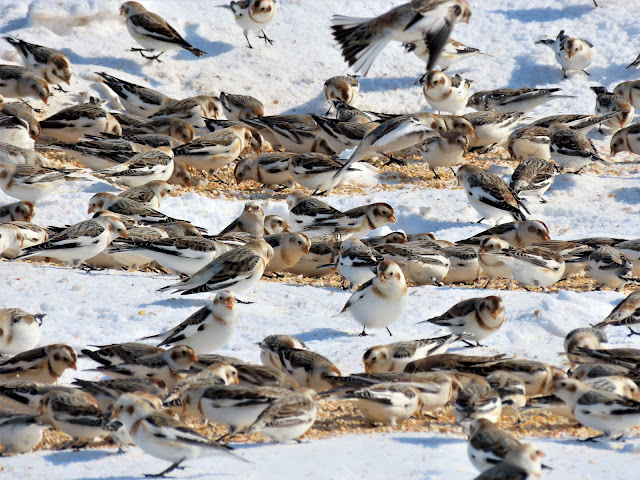 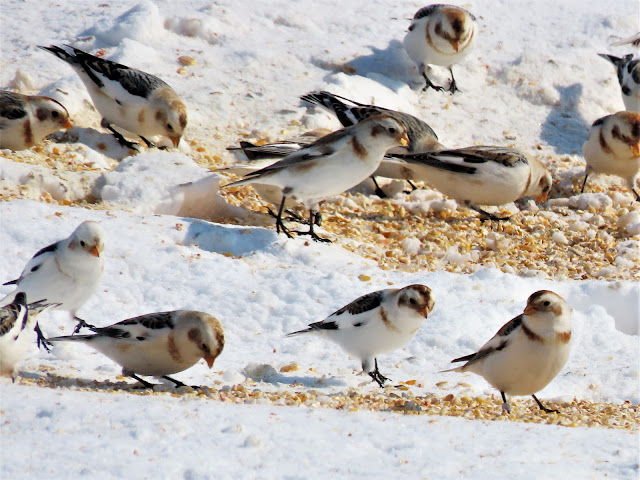 There was corn set out on a table too, and that attracted birds away from the main feeding frenzy taking place on the ground. 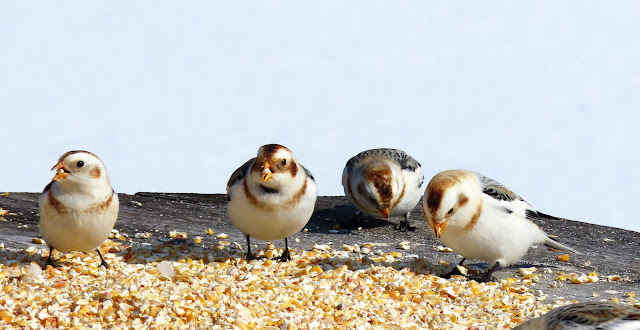 A few Horned Larks (Eremophila alpestris) joined up with the flocks of Snow Buntings, as they often do. I am sure you will have no difficulty picking them out in the next couple of shots. 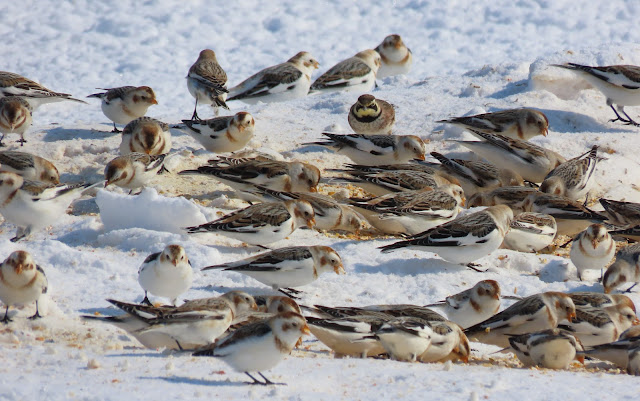 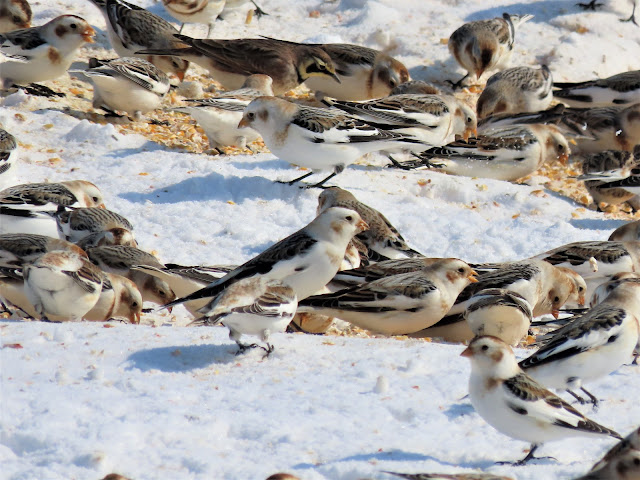 Lapland Longspur (Calcarius lapponicus) is quite rare in southern Ontario, and we were happy to spot a couple. 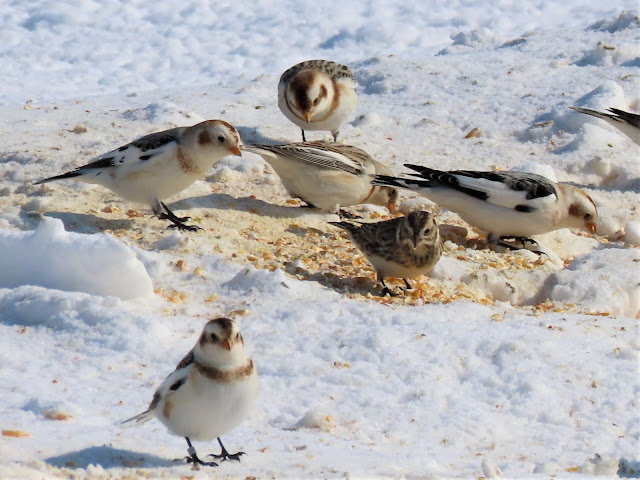 Sometimes, the birds on the wire seemed to chatter to each other and at other times they remained aloof. 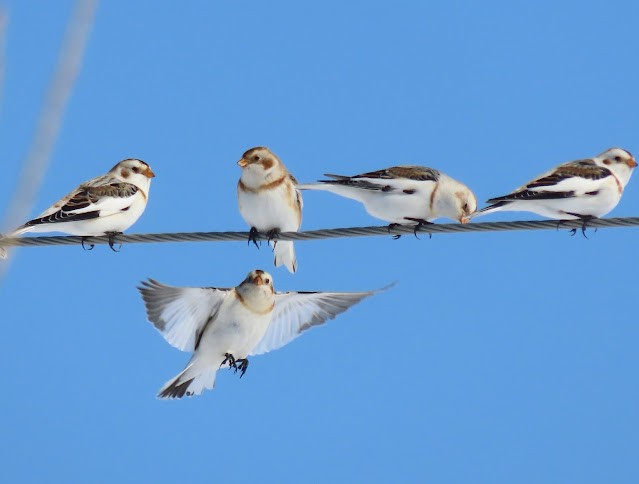 I can't resist one more picture. 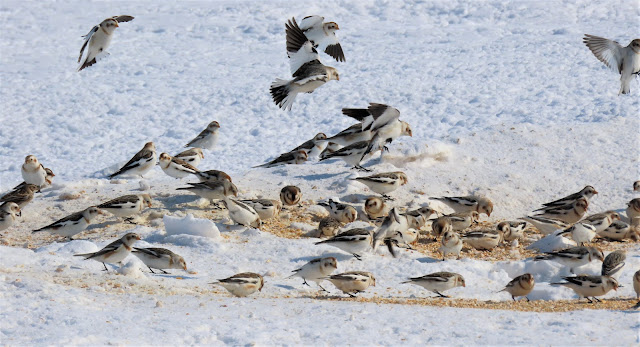 And as we left a Common Redpoll came to wish us safe journey, and we are confident that it echoed our friend's cheery "Come back soon". 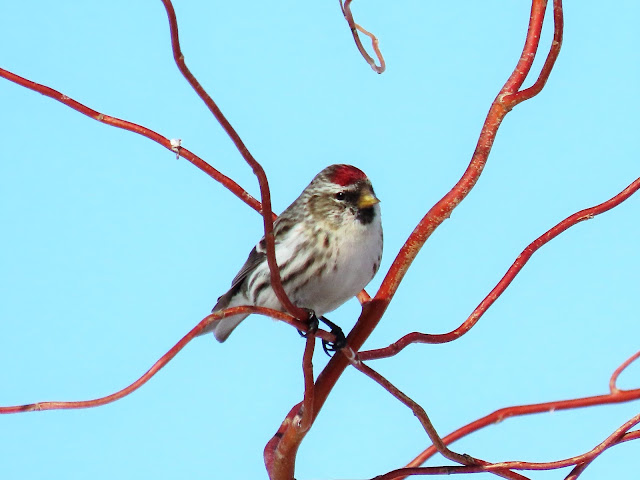 Rest assured that we will!
It was barely mid afternoon and there was glorious sunshine, so we decided to go on a quest for Snowy Owls (Bubo scandiacus). It should be noted that once the owls move south from the tundra, they tend to remain in a given area as long as there is abundant food. This does not always make it easy to find them, but it narrows down the search.
Knowing where to look proved invaluable and we soon found a majestic male. 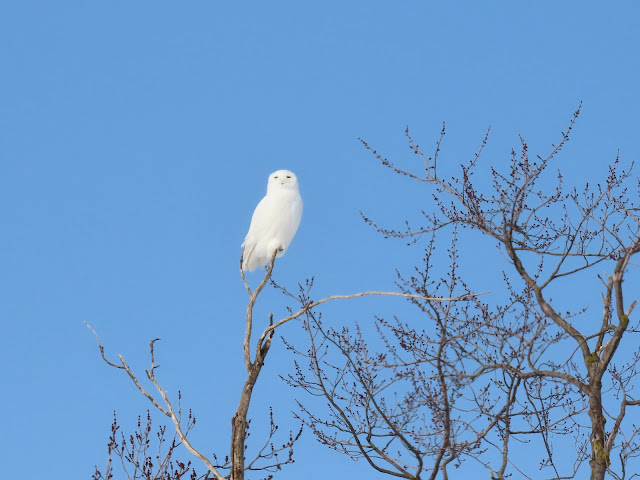 It matters not how often I see one of these birds, my heart still pounds at first sight. 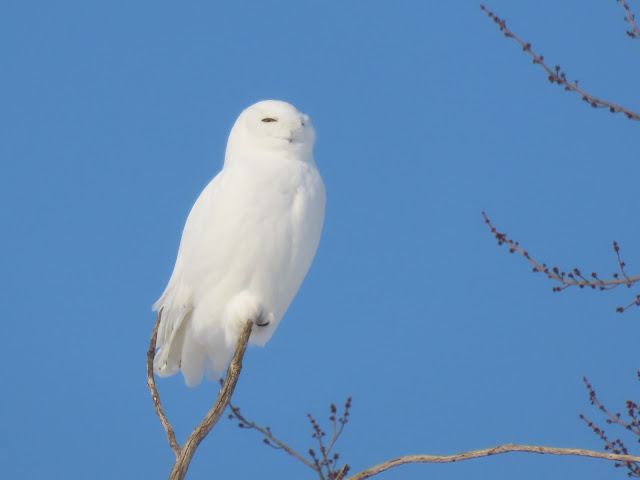 How could you ever become blasé about such a wondrous creature? 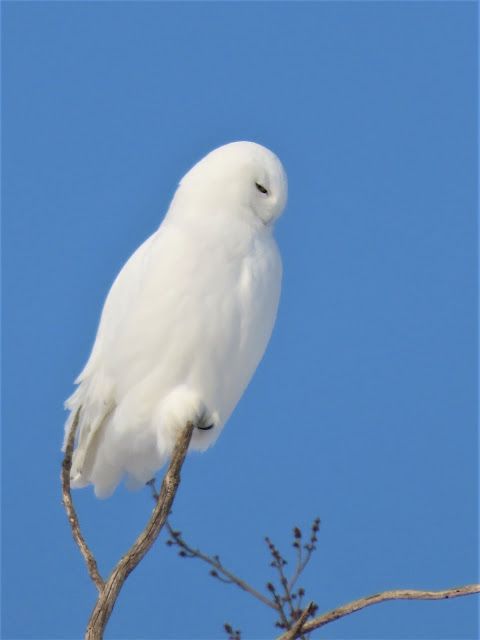 We are always very cognizant of the fact that the birds are resting, and everything should be done to avoid disturbance. So we were mildly perturbed when this bird suddenly took to the air.
And then we saw the reason. 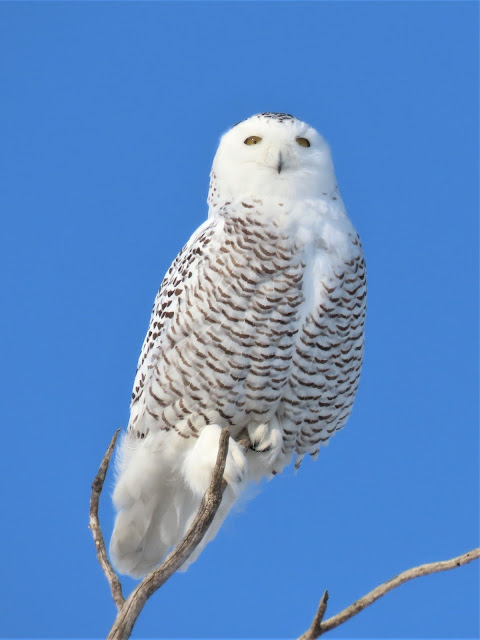 A large, immature female cruised in and claimed the perch. 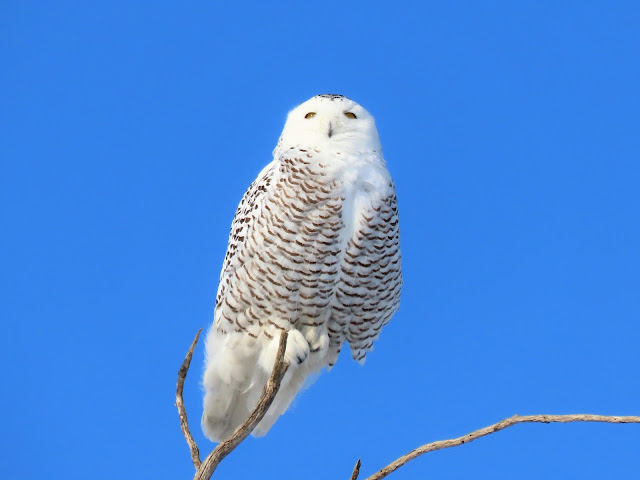 Both birds appeared to be the picture of good health, and we assume that the rodent biomass is more than adequate to ensure that they have no difficulty securing food. And of late we have been going through a prolonged cold snap so conditions have been ideal for a northern-adapted species. 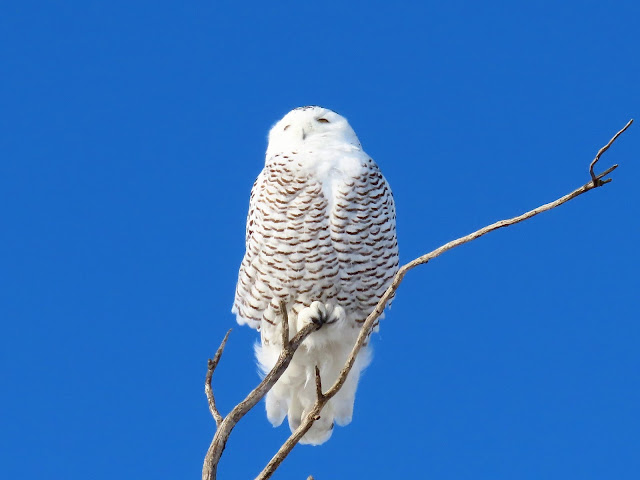 On their breeding grounds on the tundra the owls operate in a treeless environment, but their feet are well adapted to perching. 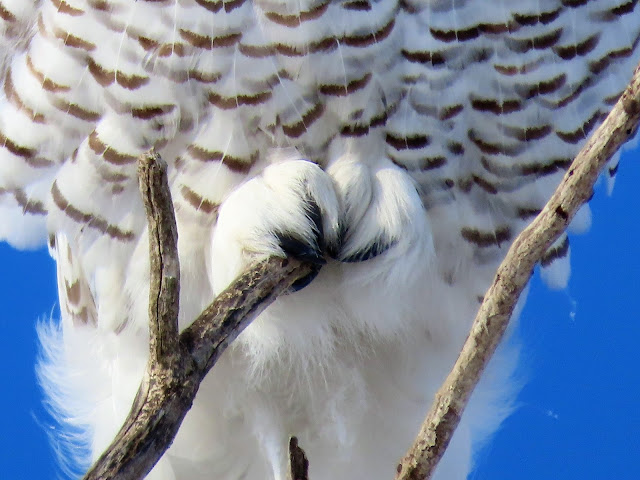 When we left the male was nowhere to be seen but the female was still firmly ensconced on her perch. 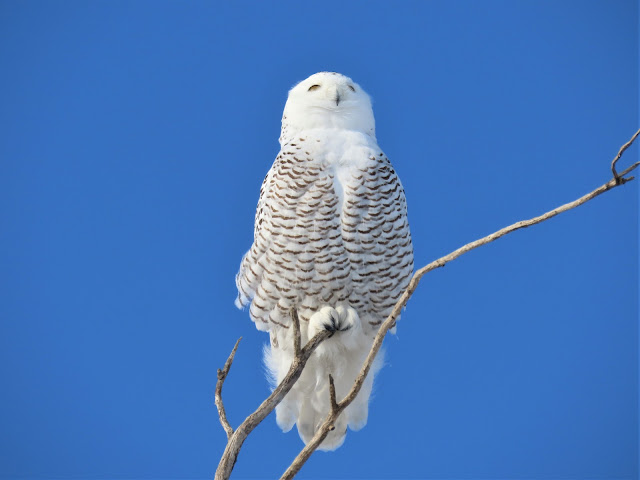 If you needed affirmation that it is great to live in a northern land, a day such as this would clinch it in an instant. We were a supremely happy couple driving home!