It seems to me that gulls in general get a bad rap, and are less appealing to some birders than other species. They also seem to engender feelings of indifference at best, hostility at worst, from the wider public. Small, cute and colourful always seems to outweigh other factors, but that is a pretty shallow judgement when you think about it.
Is this not a handsome bird? 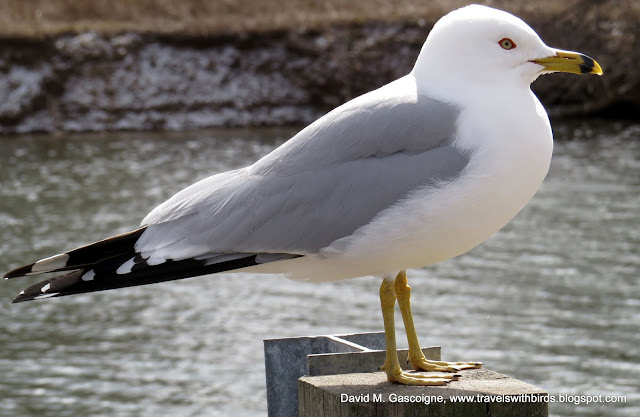 Ring-billed Gull (Larus delawarensis) is the most common gull in this area for most of the year at most locations. On a slow day of birding one can count on a few gulls to brighten up the day, wheeling overhead or following a farm tractor eagerly feeding on the exposed invertebrate prey, all the while filling the air with their cries.
To share your day with a gull is a fine thing.
These juveniles seem content to stay together while learning how to cope with life; discovering in fact what it means to be a gull. 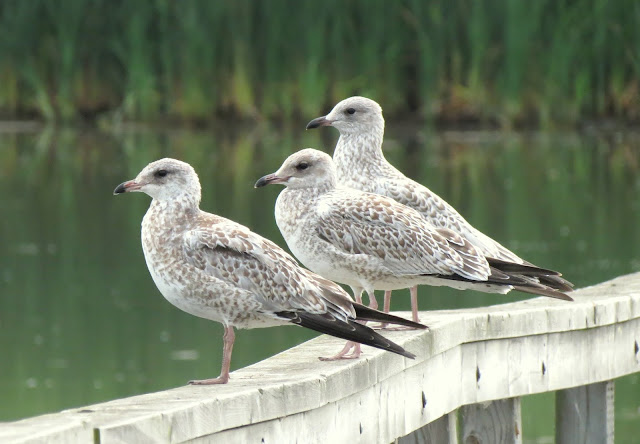 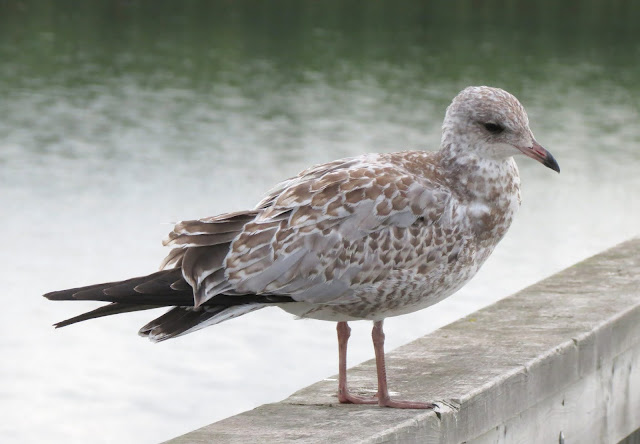 They have much to learn, and sadly, as is true for most species, many will not make it. Hazards are legion for these young birds from foxes on the ground, to falcons in the air, to witless humans with guns. 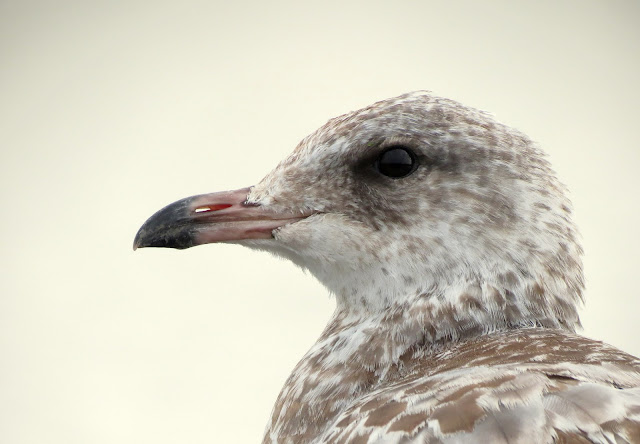 Those that survive the various perils they face will morph into handsome adults. 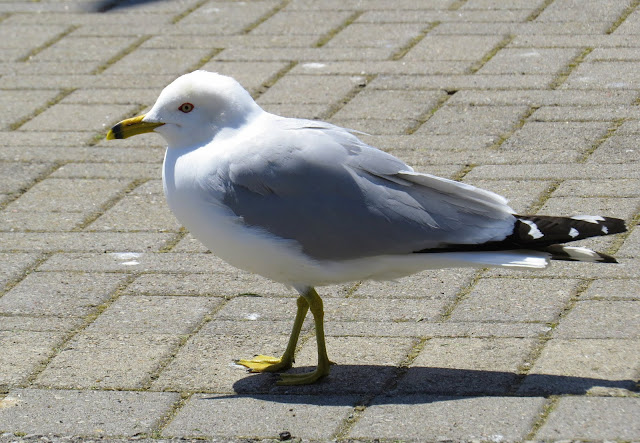 I hear the common pejorative terms for gulls more often than I care to, and it is time someone came up with something more creative than shithawk, sometimes drawn out to shitehawk, or aerial rat.
And this from the species that has polluted and despoiled the Earth and its oceans beyond recognition.
There is more than a little irony that we label gulls aerial rats when they are feeding on the very trash that we have dumped in every corner of the planet.
Yesterday, I parked my car on Beaver Creek Road to check out the birds on Laurel Creek reservoir, and the pull off at the side of the road was littered with fast food containers, both styrofoam and plastic, plastic drink cups, plastic straws and plastic bags. And we call gulls aerial rats? And then, by the way, tossed over the culvert into the water, our source of drinking water, was an area rug (I would estimate 9' x 12') and a scooter. Yup, we really have the right to criticize other species!
Interestingly, I recently read a study that indicated that while gulls may eat our discarded French fries and doughy white bread, they feed their offspring only nutritious food that the young need to develop correctly. Humans who eat junk food exercise no such discrimination and feed their growing children the same inadequate diet. The rise in obesity in North America is more than alarming, with grossly overweight people seriously lacking in basic nutrition.
This adult bird in winter plumage looks like it has eaten well. 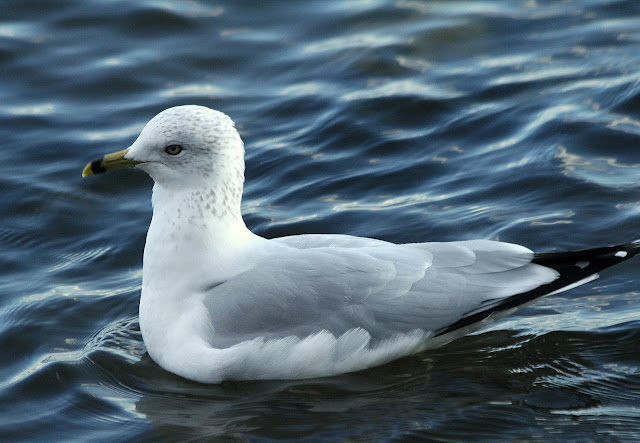 And this individual in first winter plumage has a healthy demeanour to it. 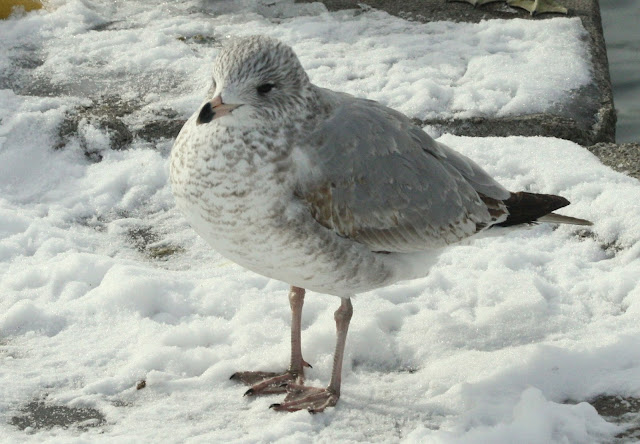 Even on the coldest winter's day, when we are shivering and pulling our toques down over our ears, and wishing we had worn an extra layer of clothing, the gulls are unfazed by it all, and brighten up the chilling bite of an Ontario winter. 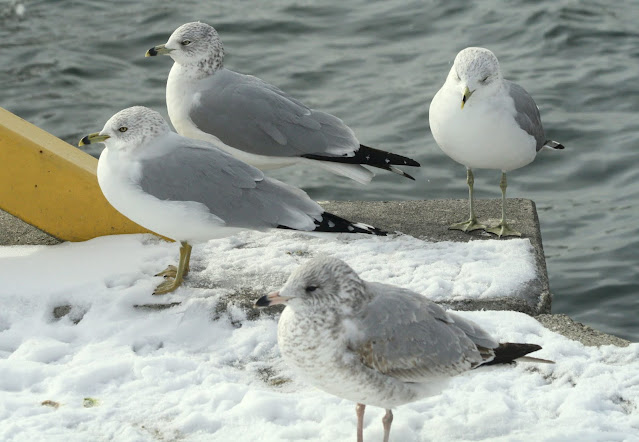 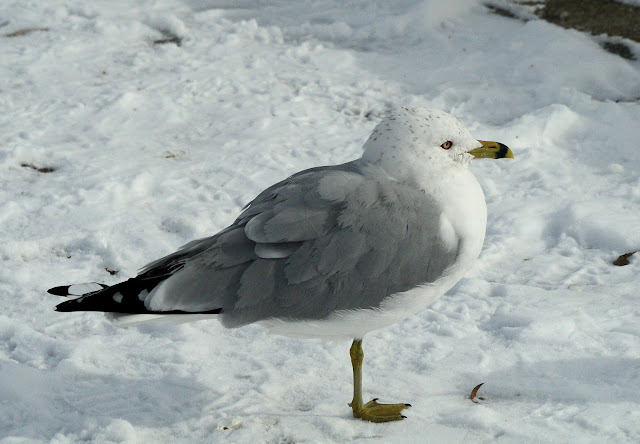 In every phase of its plumage a Ring-billed Gull is a handsome bird. 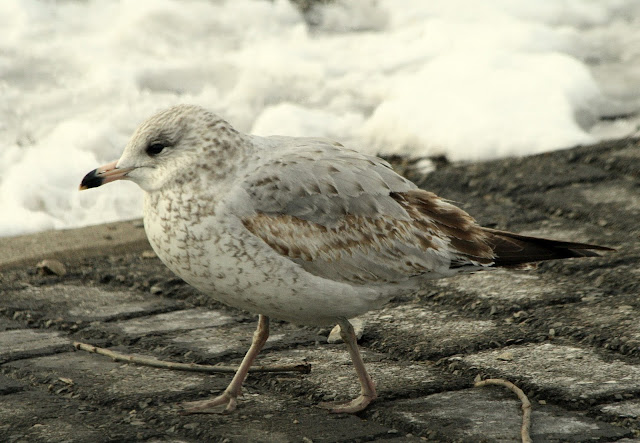 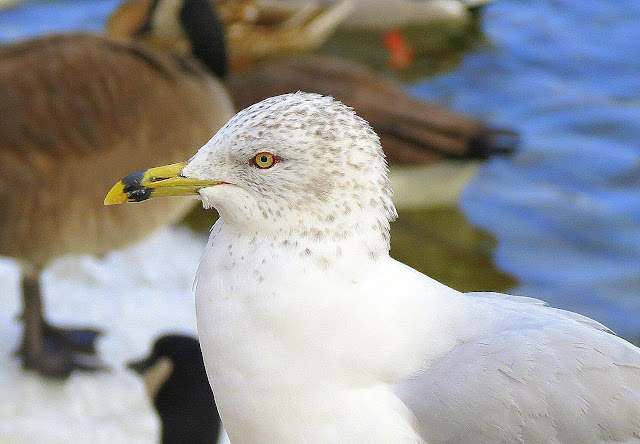 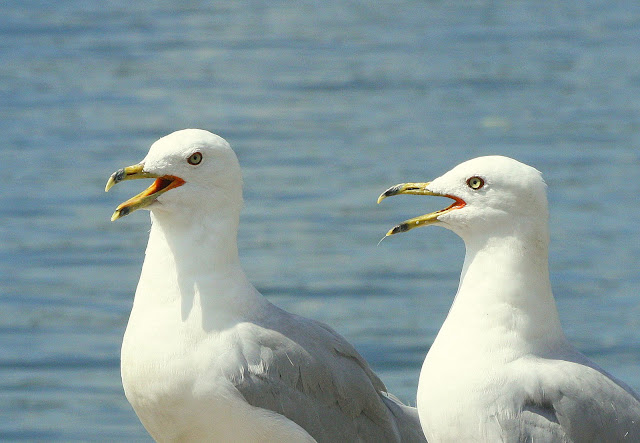 In fact to my eye, it is uncommonly beautiful and merits the close attention of everyone. Perhaps if you take the time to understand a little more of its lifestyle you may come to appreciate it - who knows even learn to love it as much as I do.
I am listing below the books on my shelves devoted exclusively to gulls (not including books on seabirds, field guides etc) in the hope that something might appeal to you and stimulate a desire to learn more about this wonderful bird we all share. It would be a great way to spend your Covid confinement!
Gulls Simplified, Pete Dunne and Kevin T. Karlson, Princeton University Press (2019)
Gulls, A Guide to Identification, P. J. Grant, Academic Press (1997)
Gulls of the Americas, Steve N. G. Howell, Jon Dunn, Houghton Mifflin Company (2007)
Gulls of the World, Klaus Malling Olsen, Princeton University Press (2018)
Gulls of Europe, Asia and North America, Klaus Malling Olsen and Hans Larssson, Christopher Helm London (2003)
Posted by David M. Gascoigne, at 11:10