Hillside Park is close to home, it is a great place to walk, harbours an abundance of birds, and is a favourite place for Miriam and me. Over the past few days we have been there twice, once just the two of us, and on Friday last we were joined by Heather and Lily.
The fall of 2020 seems to be exceptional for mushrooms and for a dedicated mycologist there must be much of interest, and more than a few good meals for one who is certain of the edible varieties.
I believe this is Pleurotus dryinus which I know to be edible, but I have never had the pleasure of tasting it. 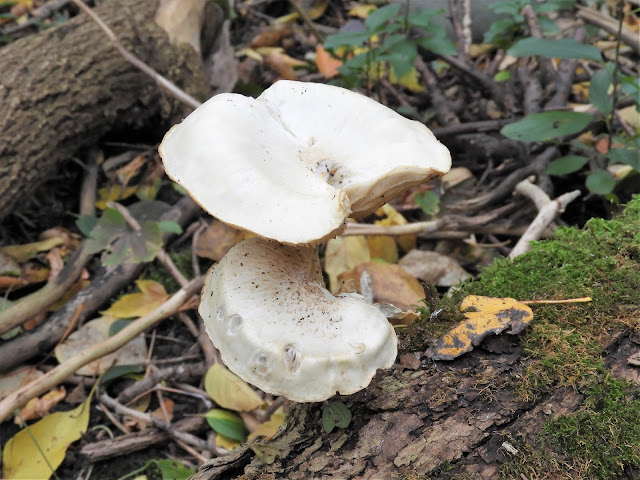 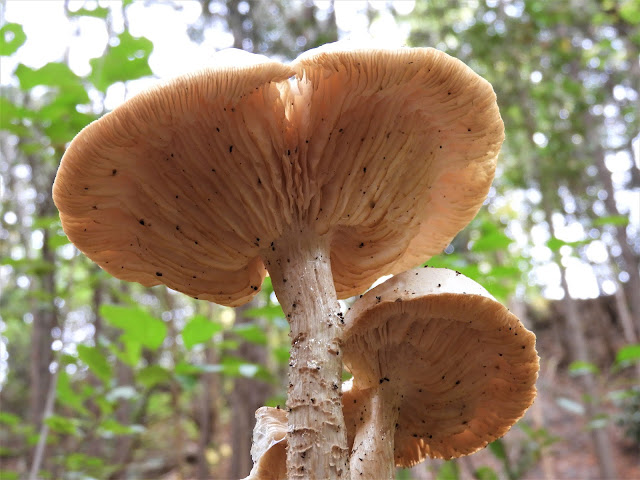 We saw several small gatherings of Common Starling (Sturnus vulgaris) and I am reminded that this species, not being native to North America, is generally not highly regarded by birders. 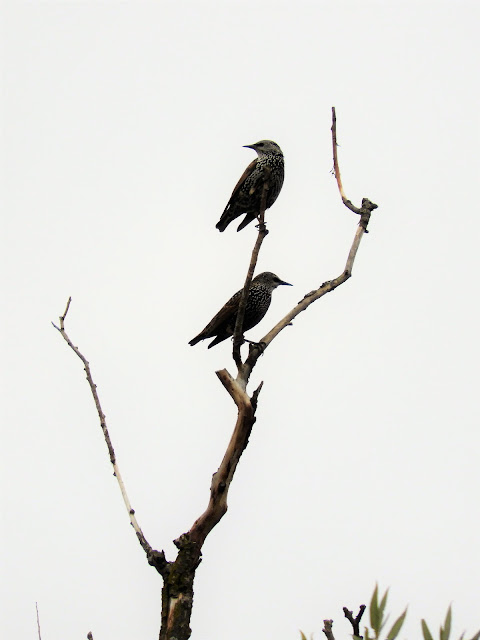 It is a little perplexing really to reflect that we introduced this species deliberately into North America and immediately set about disliking it, even embarking on futile attempts at eradication.
Miriam recently found a delightful book for me in the local Value Village store, Birds in my Indian Garden, by Malcom MacDonald, a volume that I have thoroughly enjoyed, a work that has much to commend it.
The Common Mynah (Sturnus tristis) is a kissing cousin to our familiar starling, and these words about the mynah, changed for context naturally, might well be equally attributed to our familiar starling: "One of the Common Mynah's virtues is courage. It sometimes displays daredevil recklessness. I have seen it giving chase to monsters much bigger than itself, like kites; repeatedly dive-bombing a mongoose who ventured too near its nest; disputing violently with a pair of Spotted Owlets about a building site; and in the vanguard of a troupe of birds mobbing an eagle. The species certainly has the bravado of its impertinence."
American Robin (Turdus migratorius) arouses no animosity in anyone; it is a perennial favourite, and in spring eager observers vie for bragging rights for the report of the first bird to return from its winter quarters to the south. 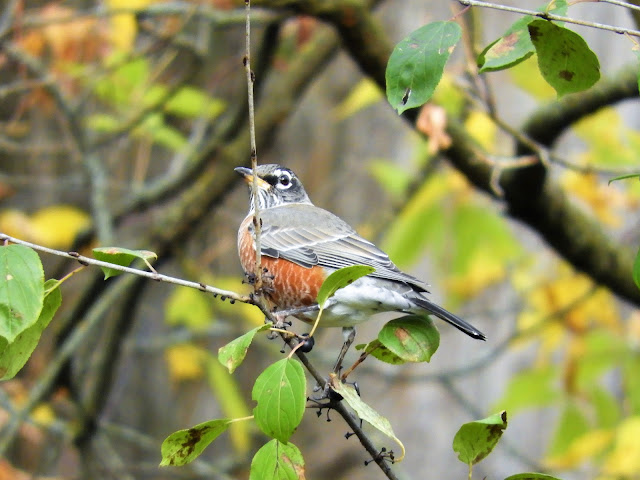 A Downy Woodpecker (Dryobates pubescens) is no less appealing and can at times be very confiding and entirely approachable. 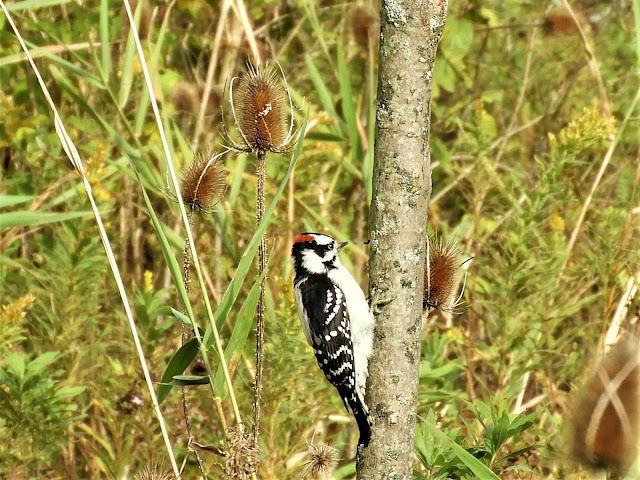 Homelessness is a scourge in many modern societies and Canada is not immune from this pressing social issue. The distant reaches of a public park are often the havens of poor souls without other shelter, and this appears to be such an encampment we stumbled upon. 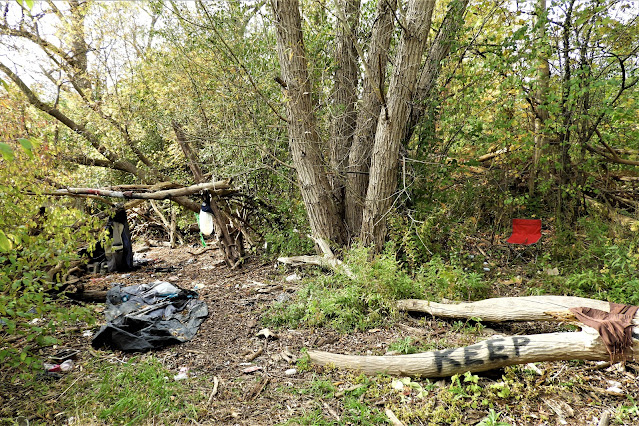 It was a happy time all round when we met Heather and Lily for our Friday walk. Lily's early days are being saturated with exposure to the natural world in all its glory, and we are happy to be the agents of her early immersion into the wonders of nature. 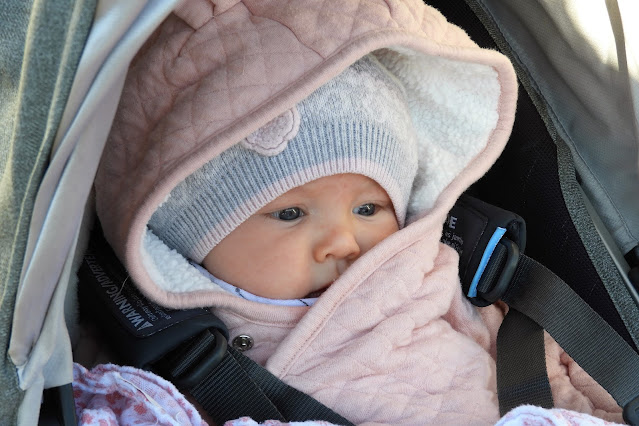 Perhaps this Hermit Thrush (Catharus guttatus) lingered into October to have one last look at Lily before heading to the southern United States and Northern Central America to spend the winter months. 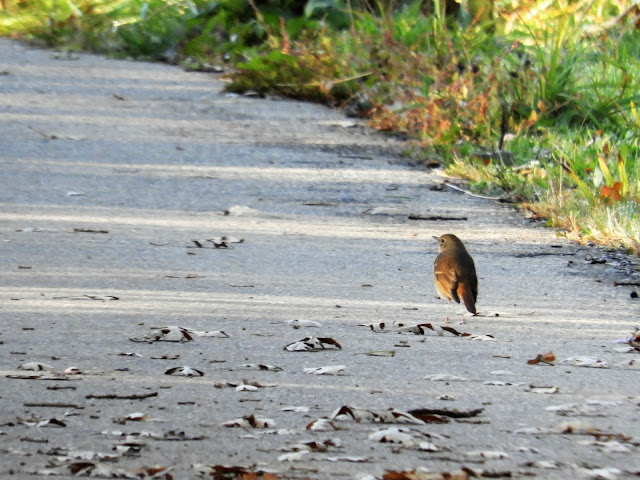 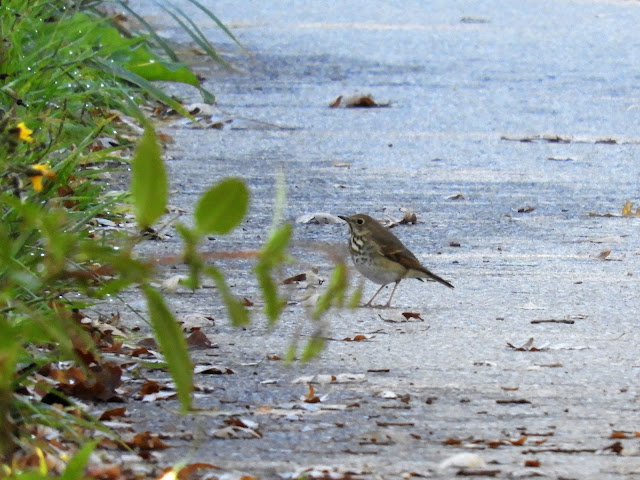 White-throated Sparrows (Zonotrichia albicollis) are also passing through this area on their way south. 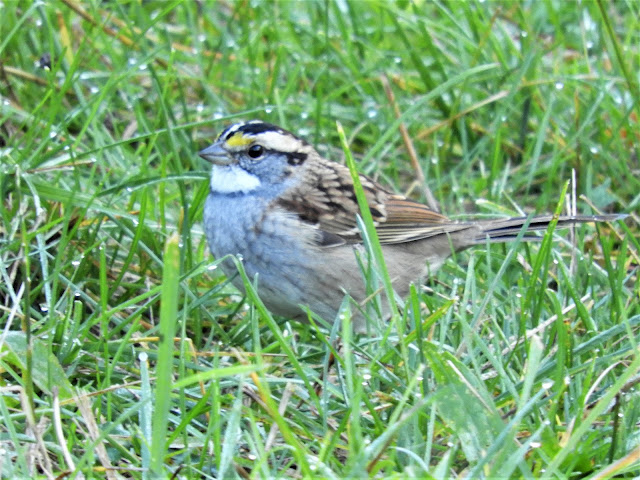 I doubt that they spend any time admiring the beauty of a southern Ontario fall. 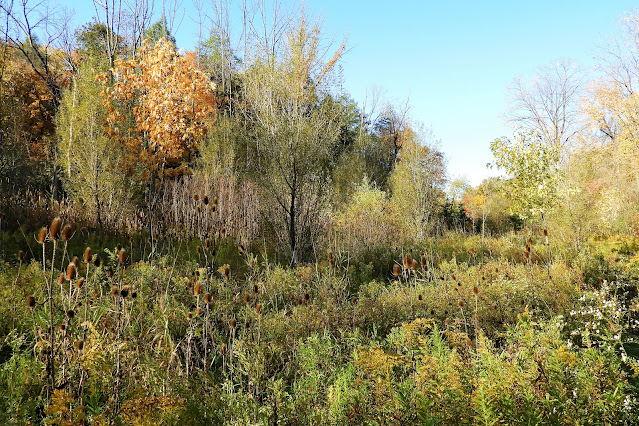 It is certainly a cause for reflection among appreciative humans, however. 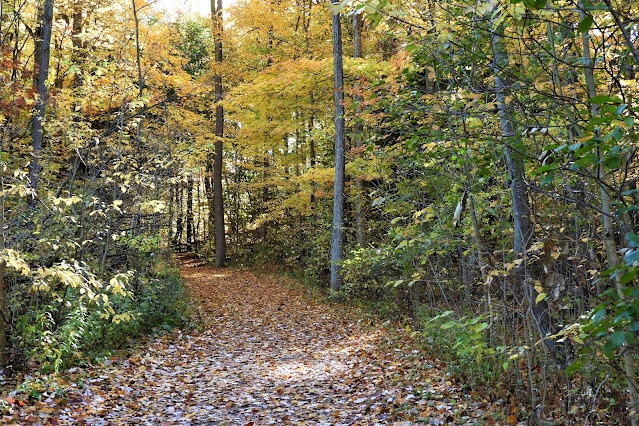 We saw several White-breasted Nuthatches (Sitta carolinensis) all busily engaged in securing food, both for instant consumption and as a choice item to be stored for winter rations. 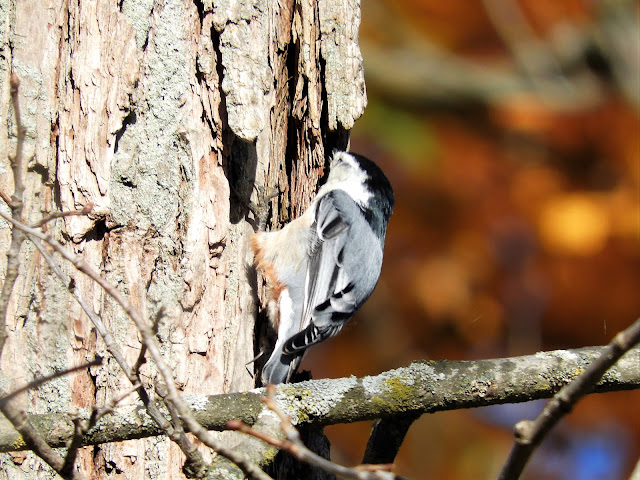 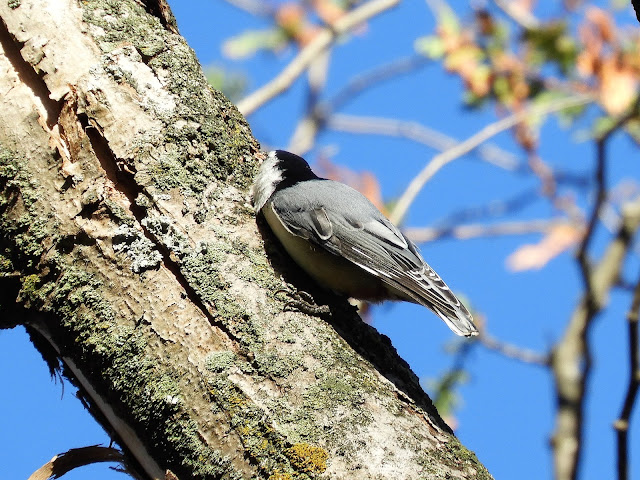 A juicy insect appears to be the prize following suitable excavation of loose bark. 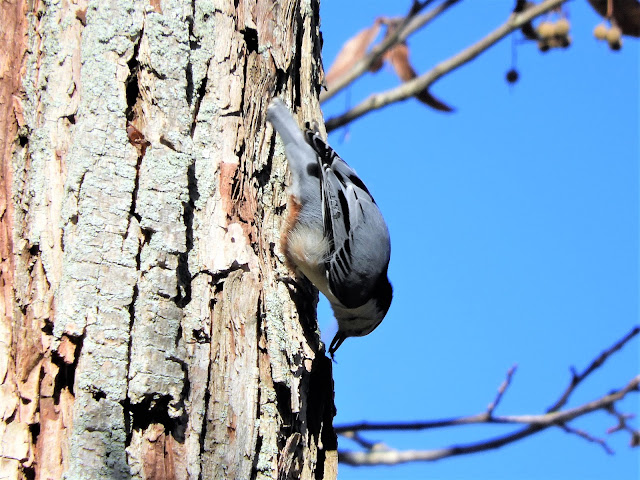 Eastern Phoebe (Sayornis phoebe) is the hardiest of our migrant flycatchers, being the earliest to arrive in spring and the last to depart in fall. 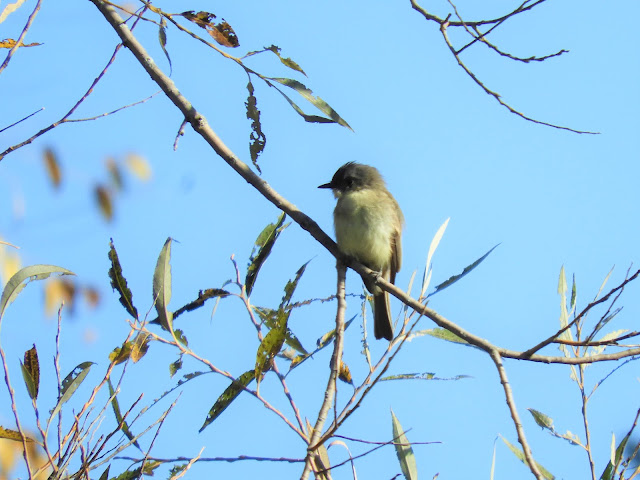 Every berry-bearing bush was loaded with fruit - rich pickings for American Robins, and for Cedar Waxwings (Bombycilla cedrorum) who were active, but declined to pose for a photograph, unfortunately. 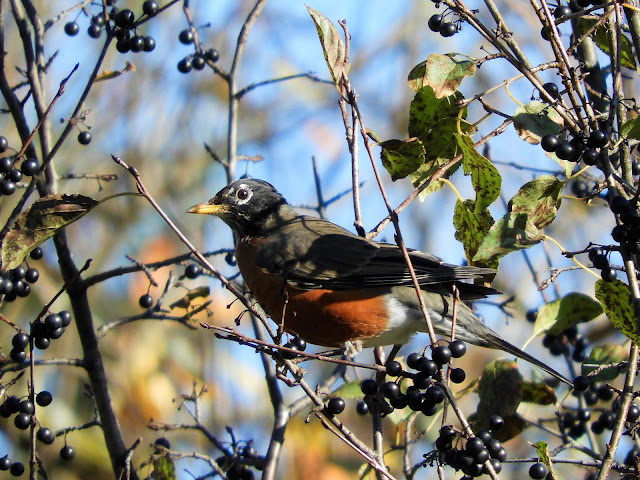 One does not tire of gazing at the splendour of fall in eastern North America. 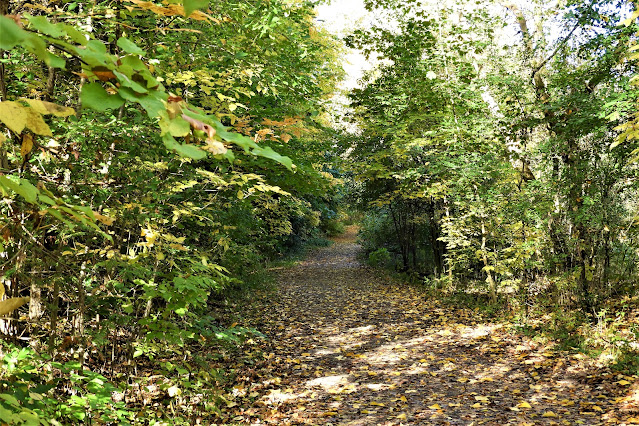 Fallen leaves carpet the trails and pathways in ribbons of intricate beauty. 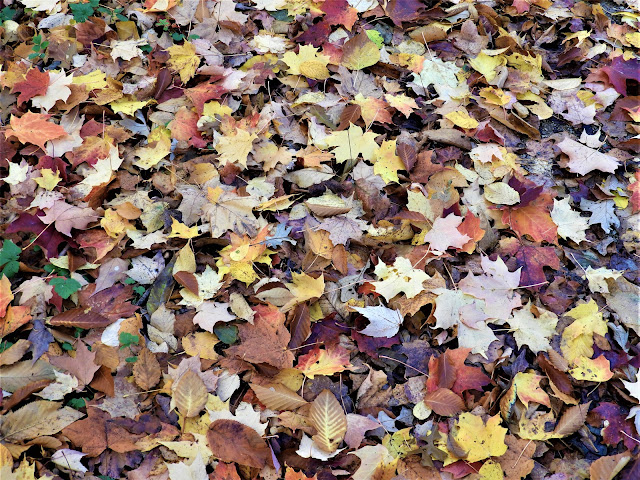 Can you even imagine making a jig saw puzzle from the leaves on the ground!
Laurel Creek meandered peacefully through the park. 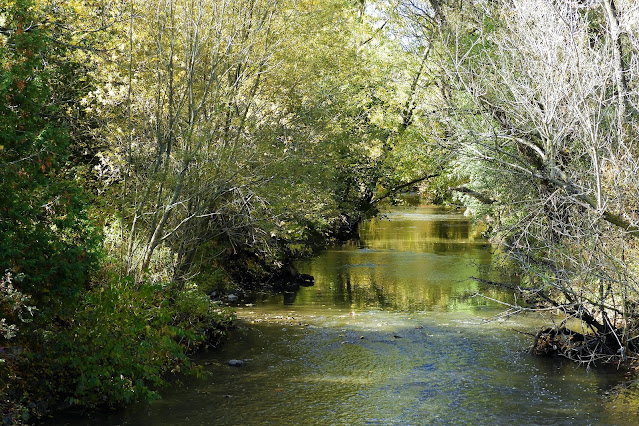 The stems of Himalayan Balsam (Impatiens glandulifera) are very visible now that the plant has shed most of its leaves, and are a deep reddish colour, hardly noticed when the plant is covered with leaves and flowers, and abuzz with the sound of bees and other nectar seekers. 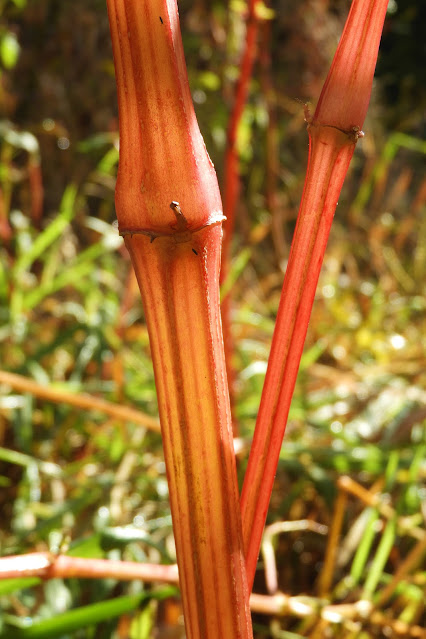 All too soon it was time to say goodbye to Heather and Lily for another week. 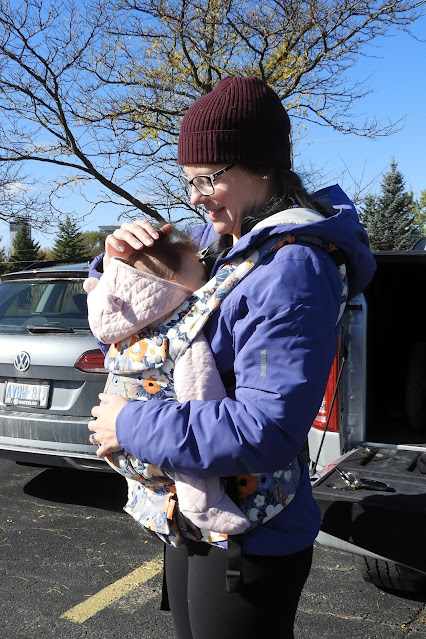 All that strenuous nature gazing makes a girl tired you know. 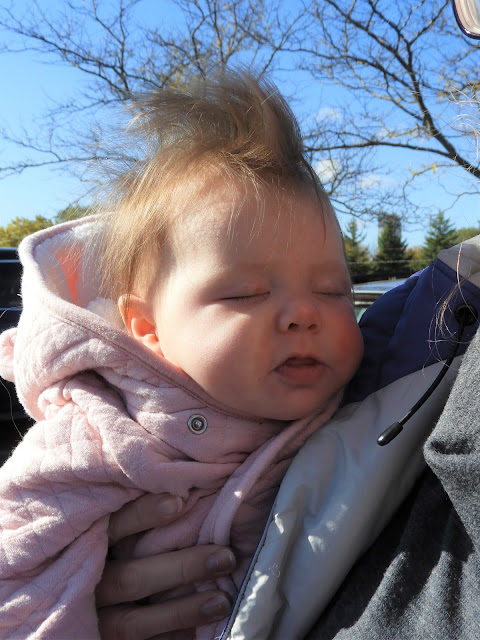 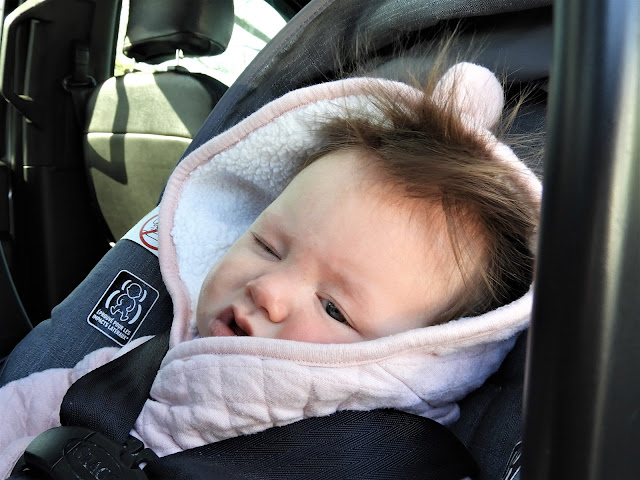 When Lily's hair finally settles into some semblance of orderliness we are all going to be mightily disappointed!
We always extol the virtues of Lily in these posts and dwell on the sheer joy of watching this little girl change as she grows up, and that is all understandable of course.
But it is perhaps time to give a shout out to Heather, who I first met as a dedicated young biologist, not yet married, hard at work helping us every weekend at our bird banding station. She always arrived dark and early along with the rest of us, never shirking for a moment the responsibilities she had taken on. 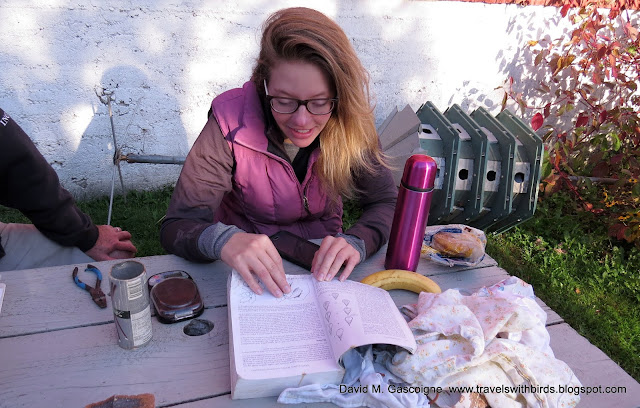 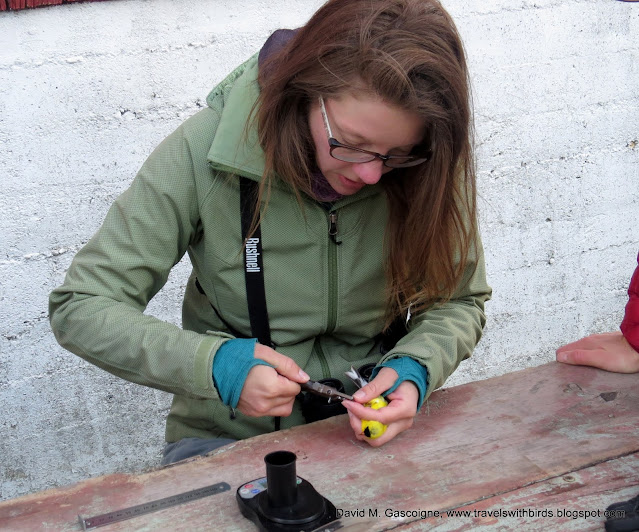 From the very moment I met this young woman I was happy to be around her, delighted to know her, thrilled to be cooperating with her in the furtherance of our knowledge of birds, in a never-ending quest to try to improve their lot in a tragically impoverished world.
Those of us who know Heather, never doubted for a moment that she would accept the mantle of motherhood easily and our faith has been validated a thousand times over as we see her interactions with Lily.
Many children visited our mist nets and seeing Heather's involvement with them left no doubt that she was "made for the job". I met Heather's mother only once when she visited us at SpruceHaven, but I can say without hesitation that she is no doubt well pleased with the terrific daughter she raised. 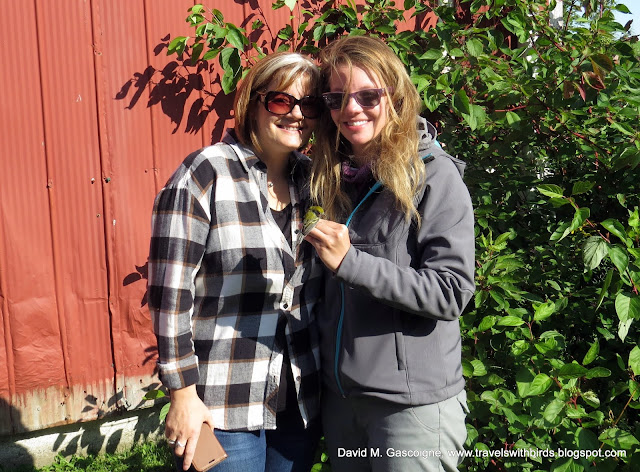 I am glad that she is willing to share her with us.
Posted by David M. Gascoigne, at 12:00