Few birds are more common throughout than this gentle and harmless little bunting. It inhabits the towns, villages, orchards, gardens, borders of fields, and prairie grounds. It is almost as abundant as the Domestic Sparrow in Europe, and is nearly as familiar, though otherwise different in its habits.
John James Audubon

Most non birders, if pressed to describe a sparrow, will call to mind the familiar House Sparrow (Passer domesticus), and will in most cases assume that a sparrow is a sparrow is a sparrow. House Sparrow is not in fact native to North America and is considered by some to be unwelcome. It certainly mounts a disturbing level of competition for many of our native species and is aggressive in its quest to thwart others for nesting sites.

Depending on the current state of taxonomy there are about 130 or so species of New World Sparrows, found only in the Americas and on some Caribbean islands. It is one of the great challenges for a novice birder to learn to identify many of the similar species, often known as LBJs (little brown jobs).
I have a great deal of fondness for this family, and they engender feelings of delight each time I see or hear them.
A few days ago I spotted our first Chipping Sparrow (Spizella passerina) of the spring in our backyard, and each day since there have been two individuals; today they were joined by a third. 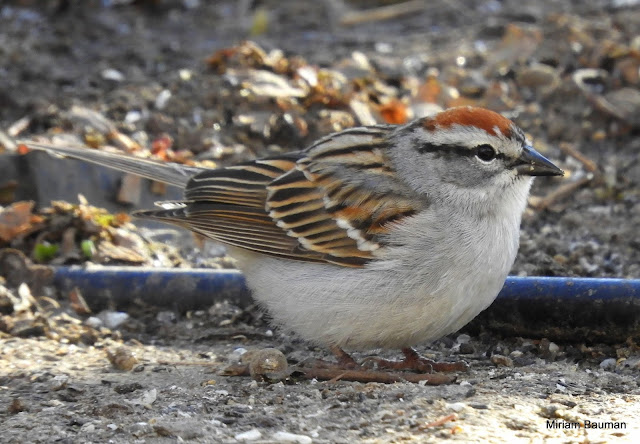 This tiny little sparrow (a mere 12 -14 cm from the tip of its bill to the end of its tail) is an unqualified favourite among our backyard patrons, and we were elated to see it return to spend another season with us. 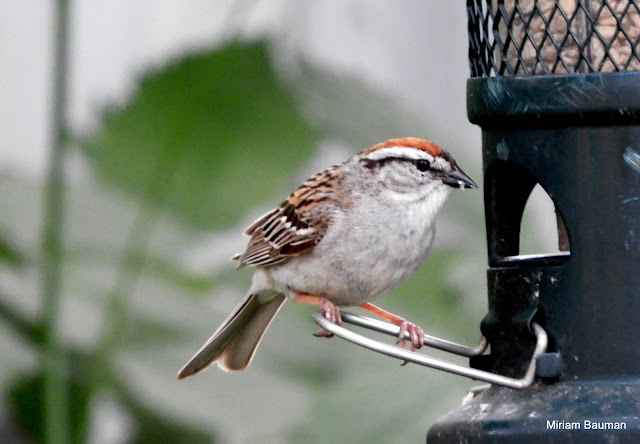 I was surprised to see that it appears to have a marked fondness for cracked corn. I have been putting out a dish of this feed each day for the Mourning Doves (Zenaida macroura) and as a means of distracting the squirrels away from the bird feeders. The Chipping Sparrows have returned to feed on it time and again. 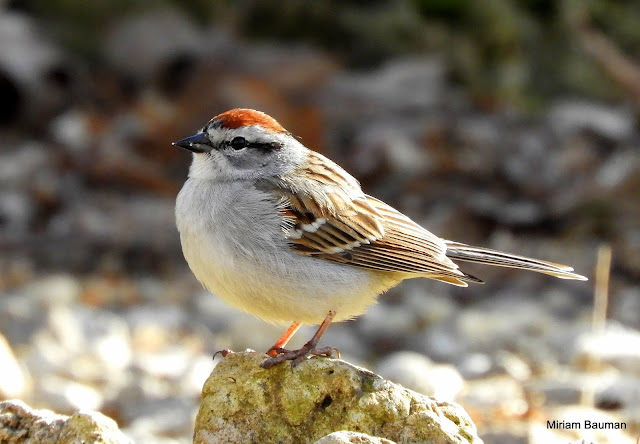 Chippping Sparrows prefer to nest in conifers from a metre to about 15 metres above the ground, and a pair nested one year in an ornamental cedar at the front of our house. This nest was parasitized by a Brown-headed Cowbird (Molothrus ater) and the eggs of the host species were ejected from the nest. 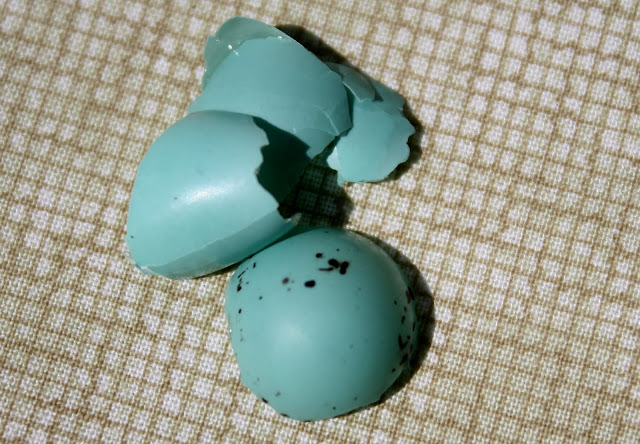 Here you see the eggs of the Brown-headed Cowbird in the Chipping Sparrow nest. 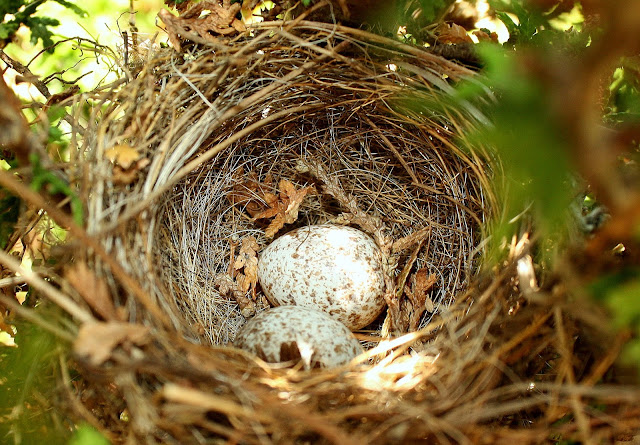 A word or two about Brown-headed Cowbird, the most common obligate brood parasite in our area.

This species was originally a bird of the western plains, and followed the great herds of American Bison (Bison bison), feeding on the insects kicked up by the hooves of the wandering animals. In fact, the cowbird was colloquially known as Buffalo Bird.
Upon extermination of the bison (one of the less enlightened actions of white settlers) the bird moved eastwards to where forests were being cleared and domestic cattle introduced to the land, thereby replicating the conditions found on the prairies. Having been part of the western landscape for millennia, bird species parasitized by the Brown-headed Cowbird had evolved various defence strategies to mitigate its impact, and the overall effect on host species populations was negligible in most cases. Eastern species, Chipping Sparrow among them, had no experience with brood parasitism and the cowbird success rate is much higher, causing serious impacts to many local populations, and in the case of Kirtland's Warbler (Setophaga kirtlandii) threatening the very future of the species.
Purely as a point of interest, I am showing the egg of a Brown-headed Cowbird laid in the bag used to transport birds caught in a mist net. It is the only time this has happened in my experience. 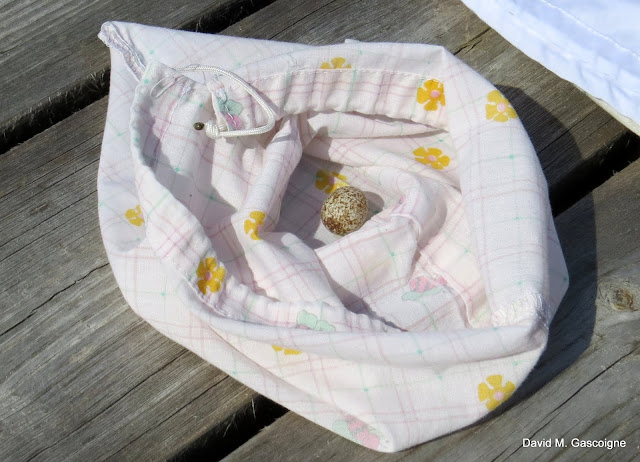 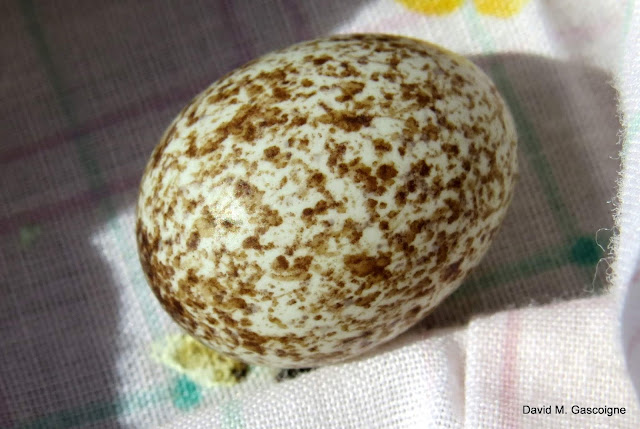 When the cowbird is successful in introducing its egg(s) into the host species' nest, its young are raised by surrogate parents, often at the expense of the young of the victimized species.
It is natural, I suppose, to have pity for the host species, and no doubt I have shared this emotion from time to time. In fact, perhaps we should be rejoicing in the degree of sophistication and success achieved by the obligate brood parasite who does not exercise choice in this matter, and is simply following its genetic code to reproduce in the way it is "programmed" to do.
For four years in a row, Chipping Sparrows have fed Brown-headed Cowbird young in our backyard. 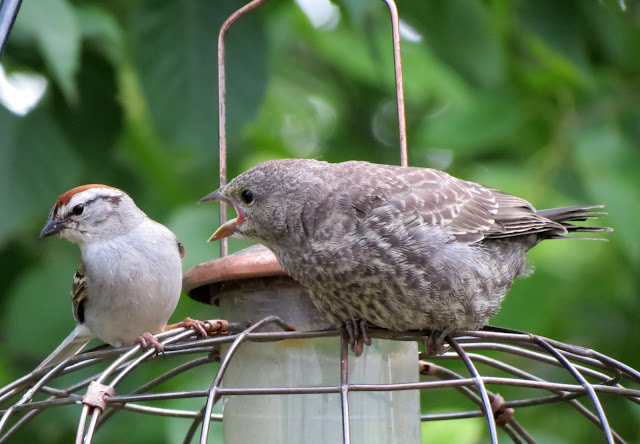 The size disparity is apparent at a glance and the Chipping Sparrow above looks weary of feeding this gargantuan offspring!
We have also had other species, Song Sparrow (Melospiza melodia) for instance, with cowbird offspring in our backyard, and they seem to be unable to resit any large youngster gaping and posturing at them, for they will deposit food into the nearest mouth. 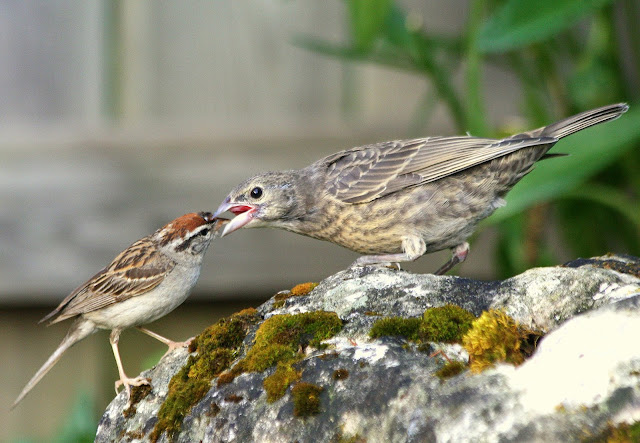 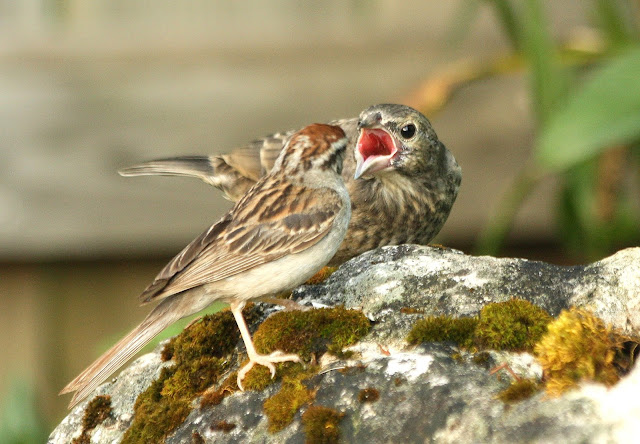 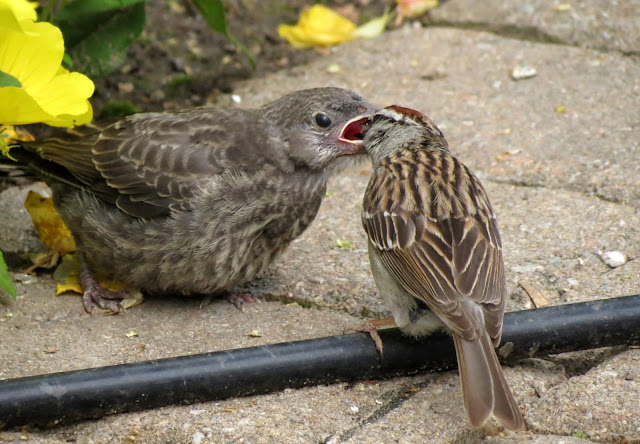 All is not once-sided, however, Chipping Sparrows have also brought their own offspring to visit. 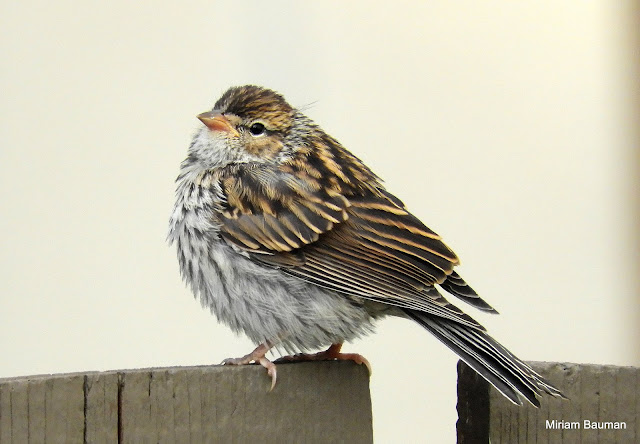 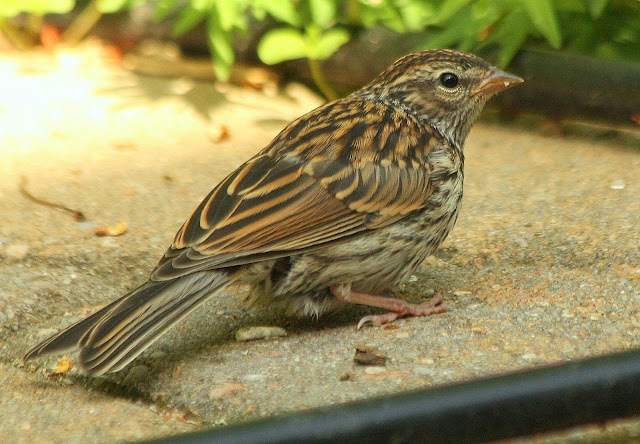 This bird has captured a large prey item and is posturing at us. 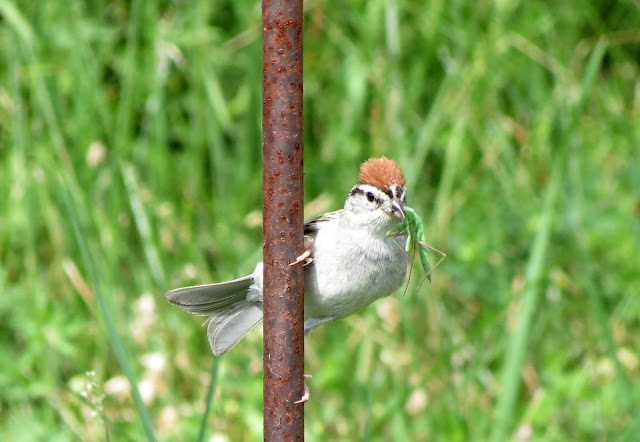 I wonder whether this choice bundle of protein and fat is destined for young Chipping Sparrows or whether another Brown-headed Cowbird has succeeded in taking over the nest? In either case, we wish them well.
Nature is eternally fascinating!