December is turning out to be a very good month for owls for us, as we spotted the third species of the month, an Eastern Screech Owl (Megascops asio). What made this sighting even more agreeable than any routine view of an owl was the fact that it was a red morph bird, considerably in the minority here. 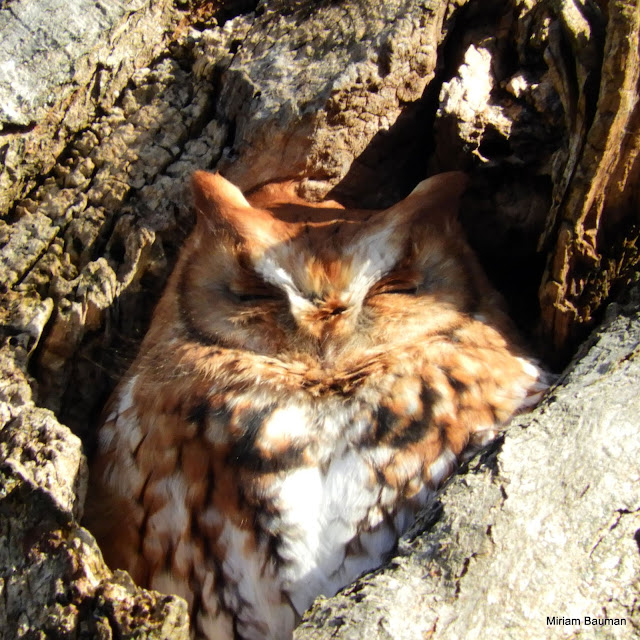 Eastern Screech Owl is found in two principal colour morphs, grey and red, with grey more common in the northern part of its range and red predominant in the south. There is actually a third variant, a brown morph, but this is extremely uncommon and a phase I have never seen. Most of the birds discovered in southern Ontario are grey morph birds.
The call of the Eastern Screech Owl has always carried a tinge of the melancholy. Thoreau called it "a most solemn graveyard ditty, the mutual consolation of suicide lovers!" That seems a touch extreme to me, but the call is nevertheless somewhat spooky to my ears, especially when heard walking home on a dark, rainy night.
Visually, this little owl is the epitome of cuteness. 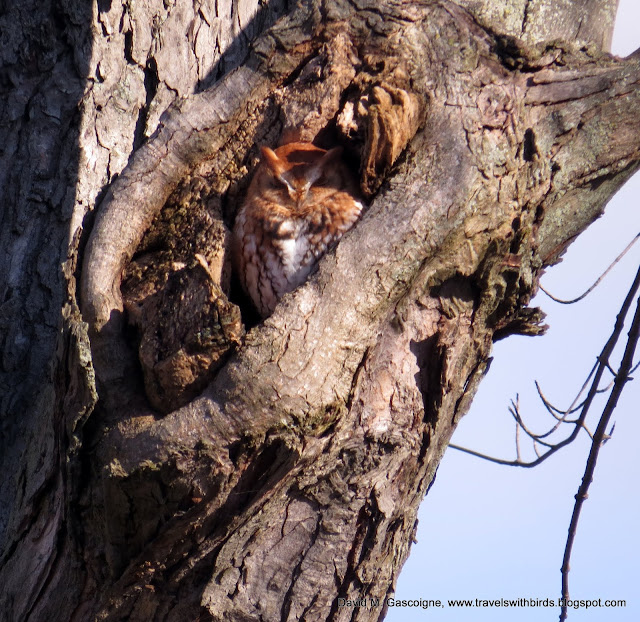 Eastern Screech Owls roost in cavities (natural holes or nest boxes) during the day and are therefore seldom seen. On a bright, sunny day, however, such as was the case today, they will often sit at the lip of their hole basking in the sun. 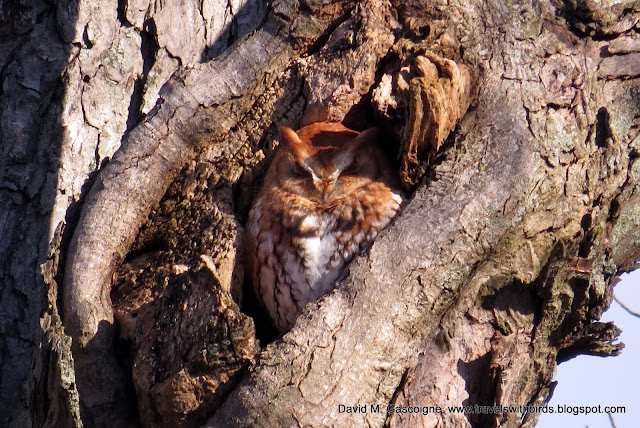 Eastern Screech Owls favour hardwood or mixed forests, but have learned to adapt to parks, cemeteries and gardens and will even breed in residential neighbourhoods, where they are subject to intense predation by domestic cats unfortunately.
"The screech owl enjoys a varied bill of fare including almost every class of animal life," wrote Arthur Cleveland Bent in 1938, which no doubt accounts for its relative abundance. Insects, rodents, small birds, and even small fish and crayfish form a regular part of the screech owl diet, depending on the season. 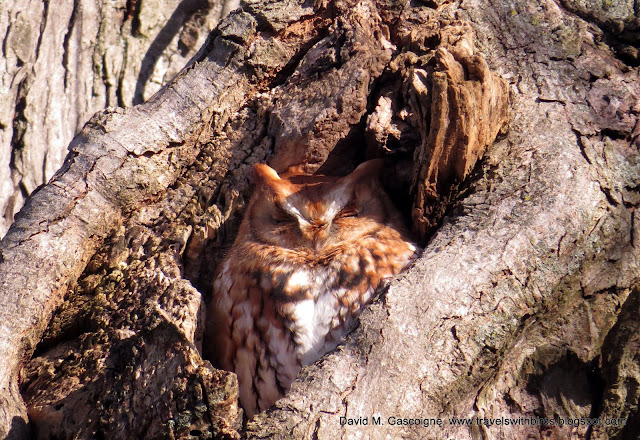 A typical clutch for Eastern Screech Owl is four eggs, and all four young are often raised to fledging. Because the chicks all regurgitate pellets and defecate in the nest, the smell, accentuated by prey remains can be atrocious. The olfactory lobe in a screech owl is not well developed!
On a crisp, clear winter's day, with the temperature around minus two, odour was not a concern!
Recently our naturalists club, Waterloo Region Nature, had winter toques with the club logo made, and today all four of us (Franc, Jim, Miriam and me) all wore our new gear. Anyone seeing us might be forgiven for assuming that we were on a club outing!