All of the clubs, associations and individuals who donated part of the money needed to acquire this tract of land by The Bruce Trail Conservancy were invited to take part in a tour of the property. The Kitchener-Waterloo Field Naturalists participated in this event and were well represented by several of its members, including Miriam and me.
This acquisition was deemed to be especially significant as it provides a connecting corridor of rich habitat between the existing reserves known as the Fairmount Wetland and Webwood Falls. Now that there is a direct route between the two, several kilometres of road travel have been eliminated.
Our two staff ecologists for the day were Brian Popelier and Adam Brylowski and they did a fine job of interpreting the natural riches of the area.

Before embarking on our walk we took a small detour to look at one of the falls from which Webwood Falls takes its name. It was quite beautiful, although the mosquitoes in that area were fierce. We were well prepared with repellent, however, so it didn't bother us too much. 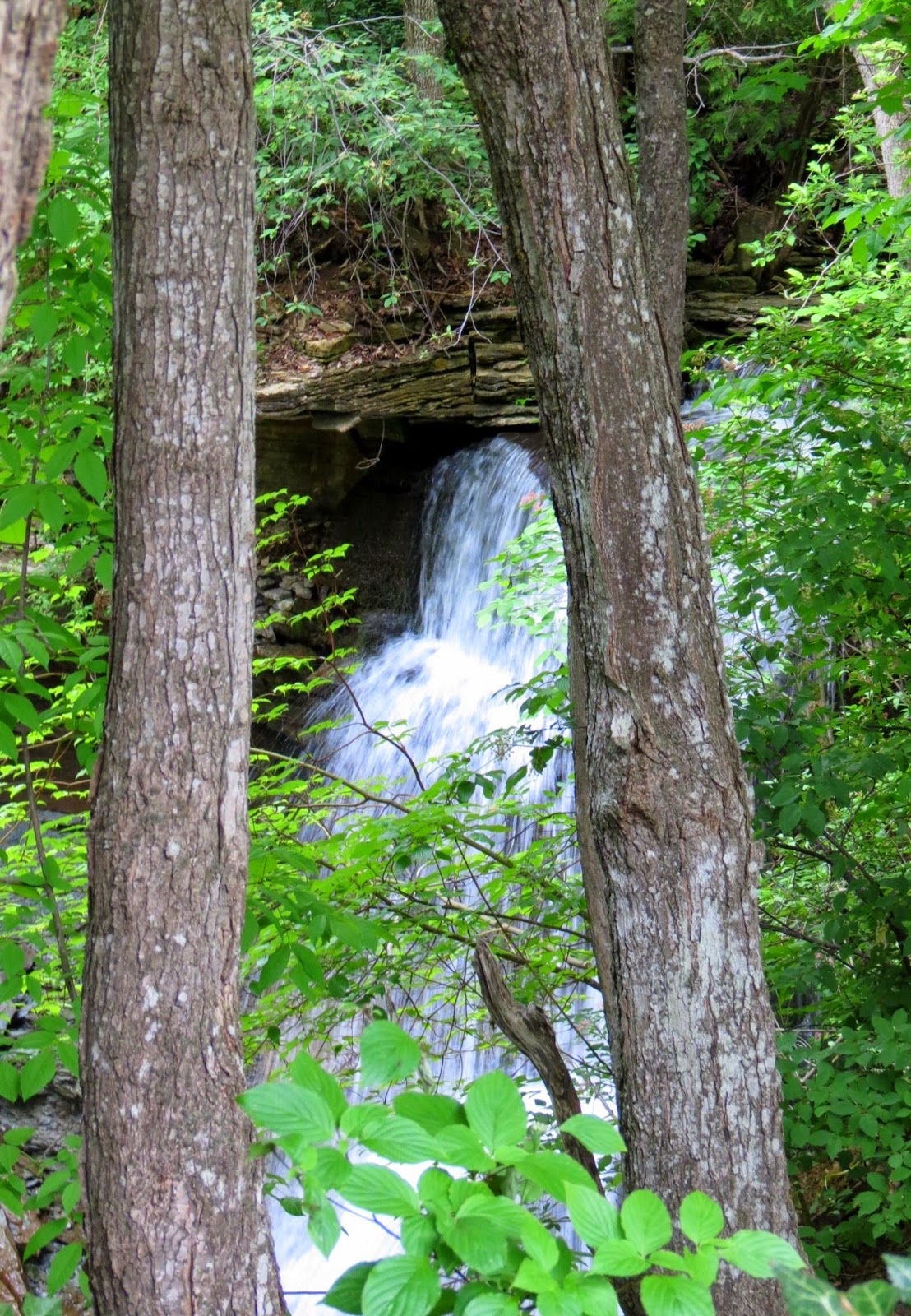 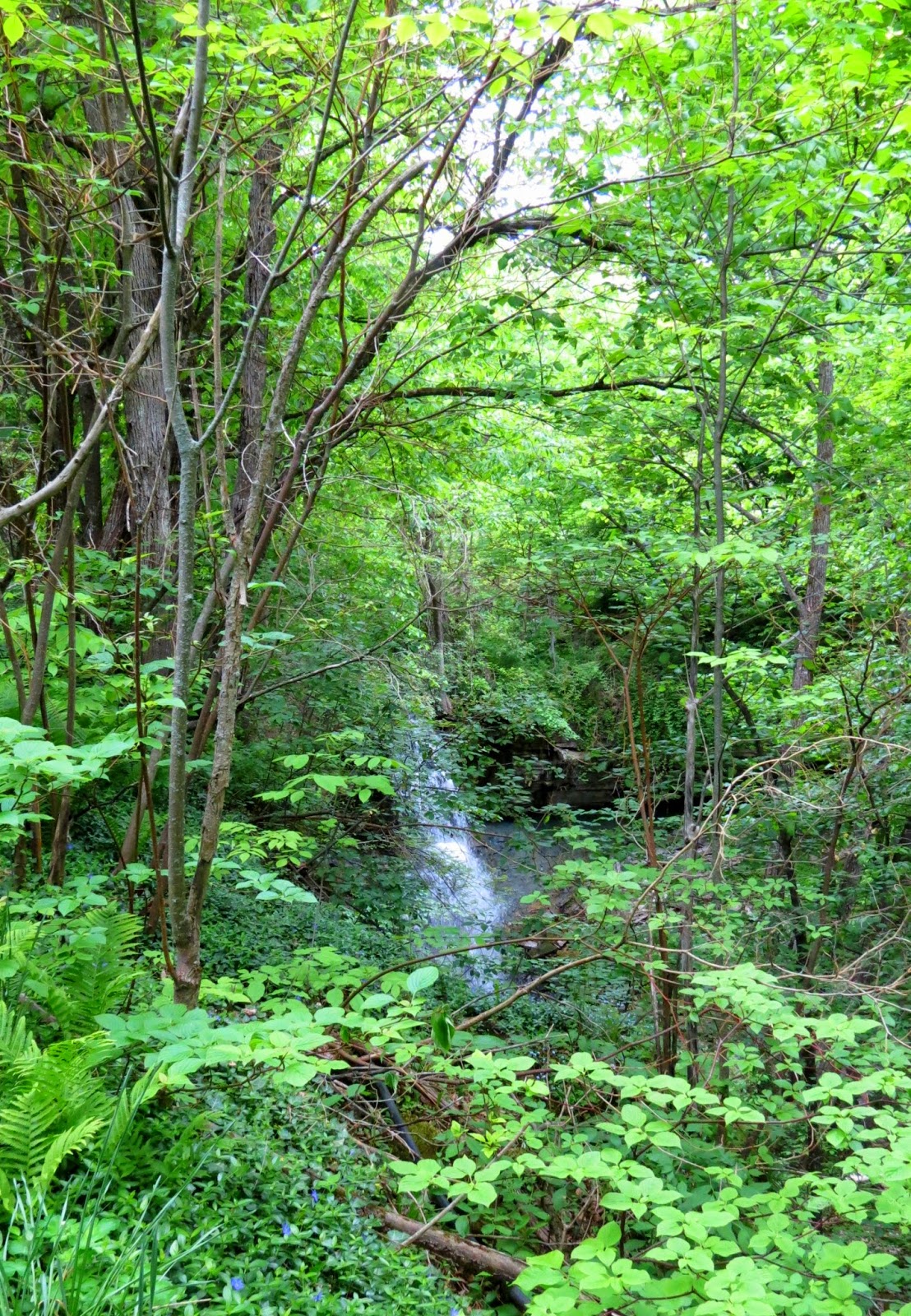 There were many attractive features of the property which contains a variety of habitat, not the least of which was this swamp, so typical of the area. 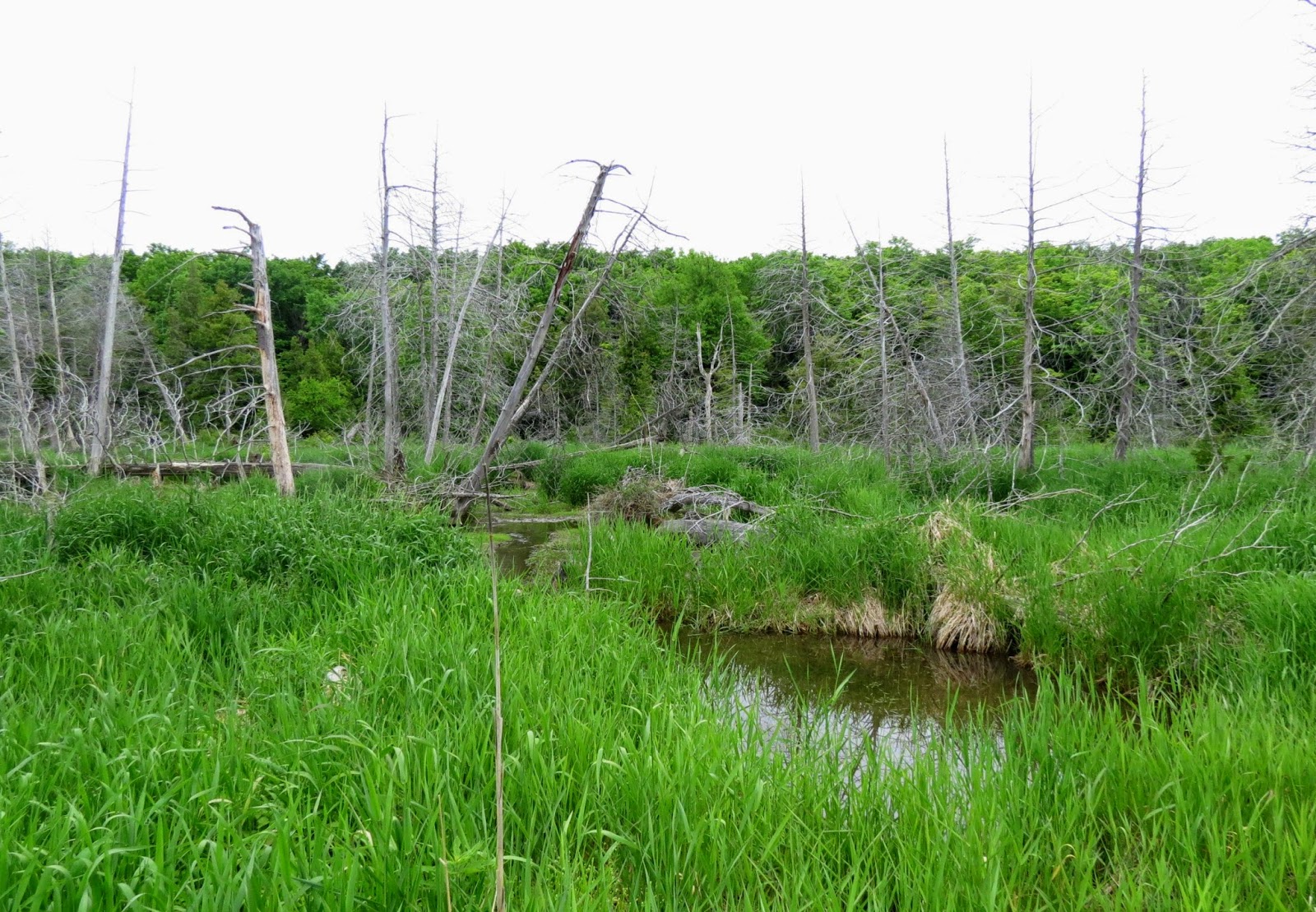 Several species of damselflies and dragonflies were observed, not easy to photograph, however, since we were engaged in an exploratory walk and not able to tarry at length. Nevertheless we were able to get a fairly decent shot of this male Ebony Jewelwing Caloptyeryx maculata. 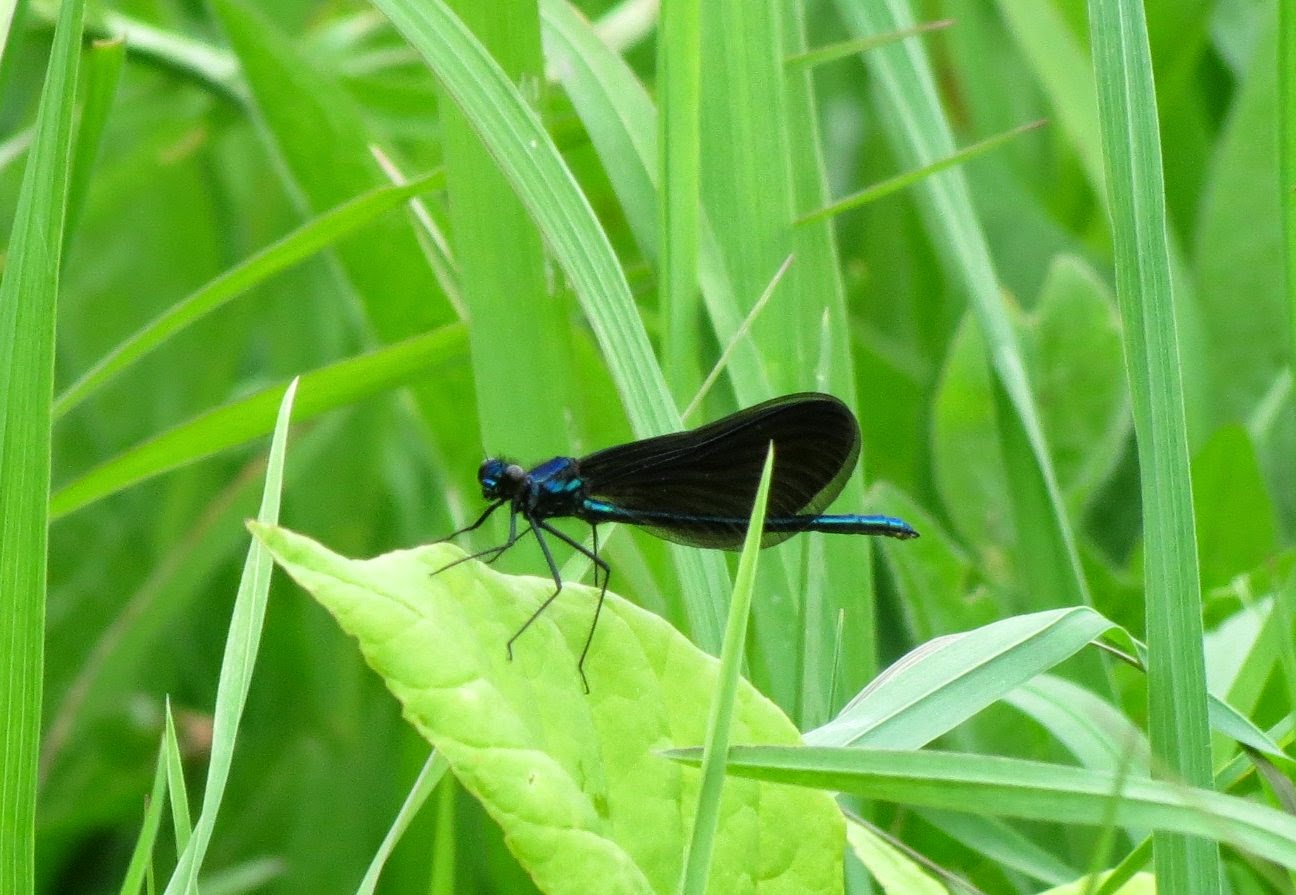 Miriam reacts badly to insect bites and she was well buttoned up for protection. This, combined with a liberal application of bug spray on every square centimetre of exposed flesh, served her well for she was not bitten even once. There were many beautiful plants and trees including extensive patches of  Tall Buttercup Ranunculus acris. 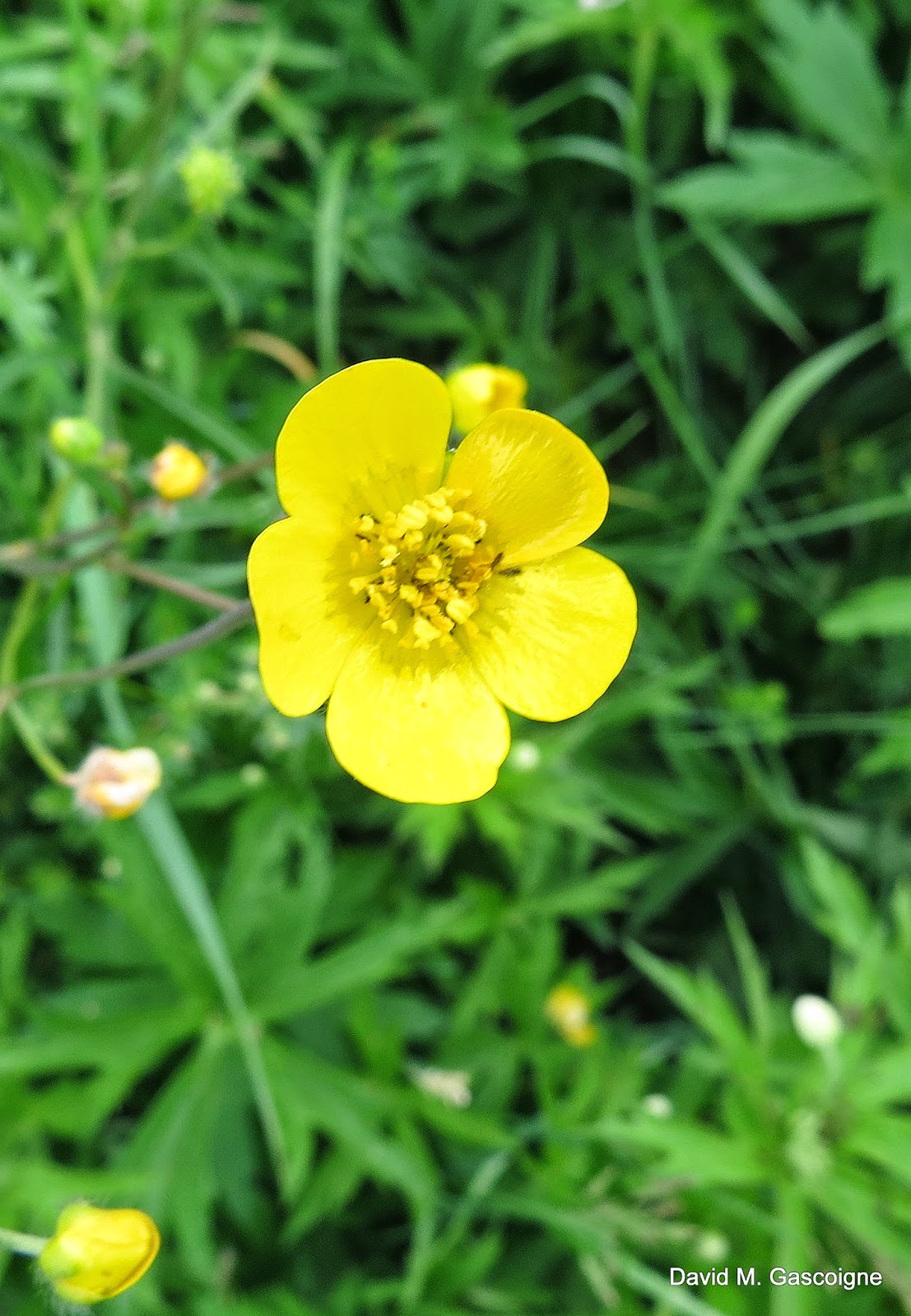 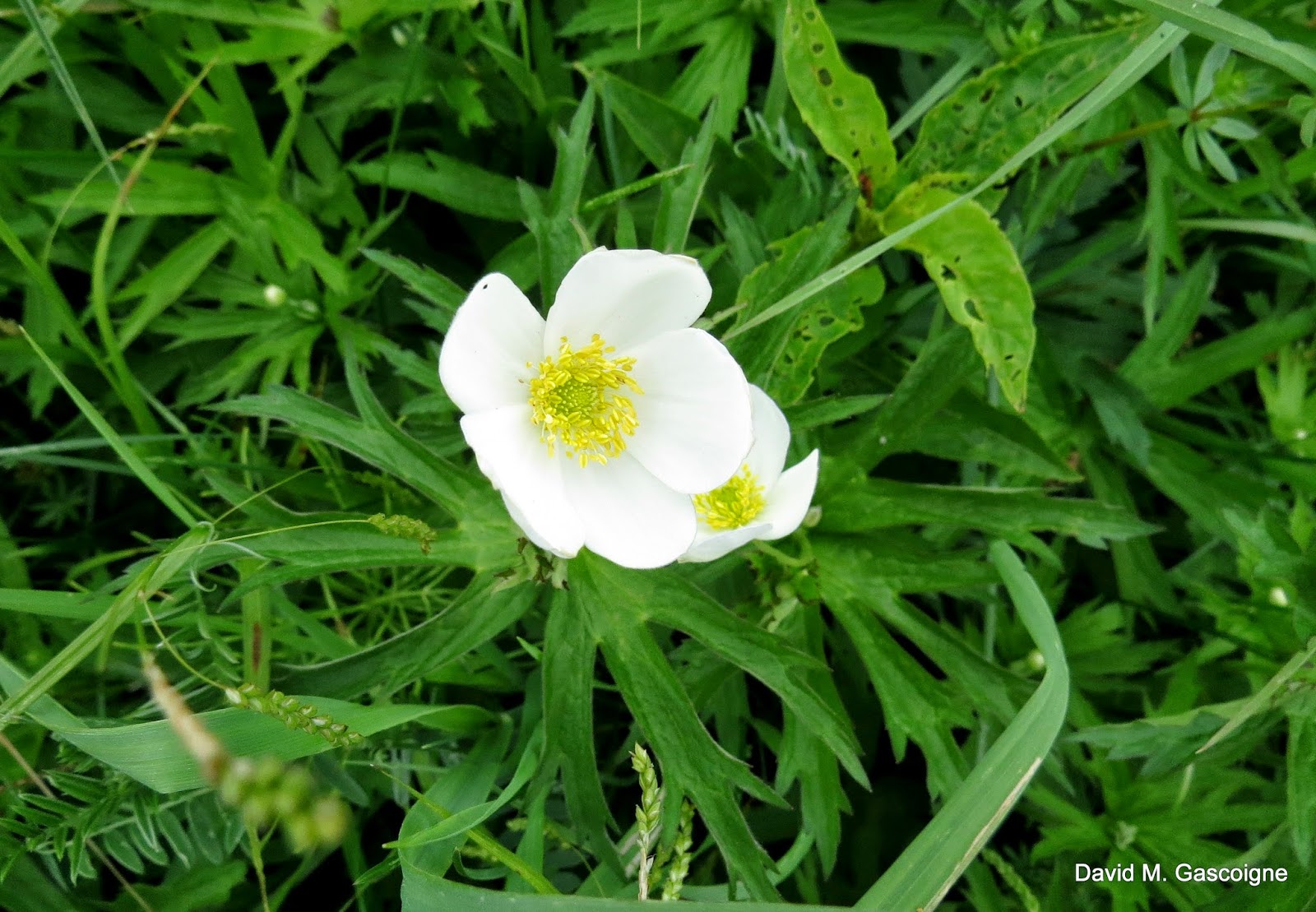 The curiously named Ostrich Fern Matteuccia struthiopteris is a native species and was quite prolific in some areas. It was quite wonderful to see it swaying in the gentle breeze, seeming at times to resemble a wave. 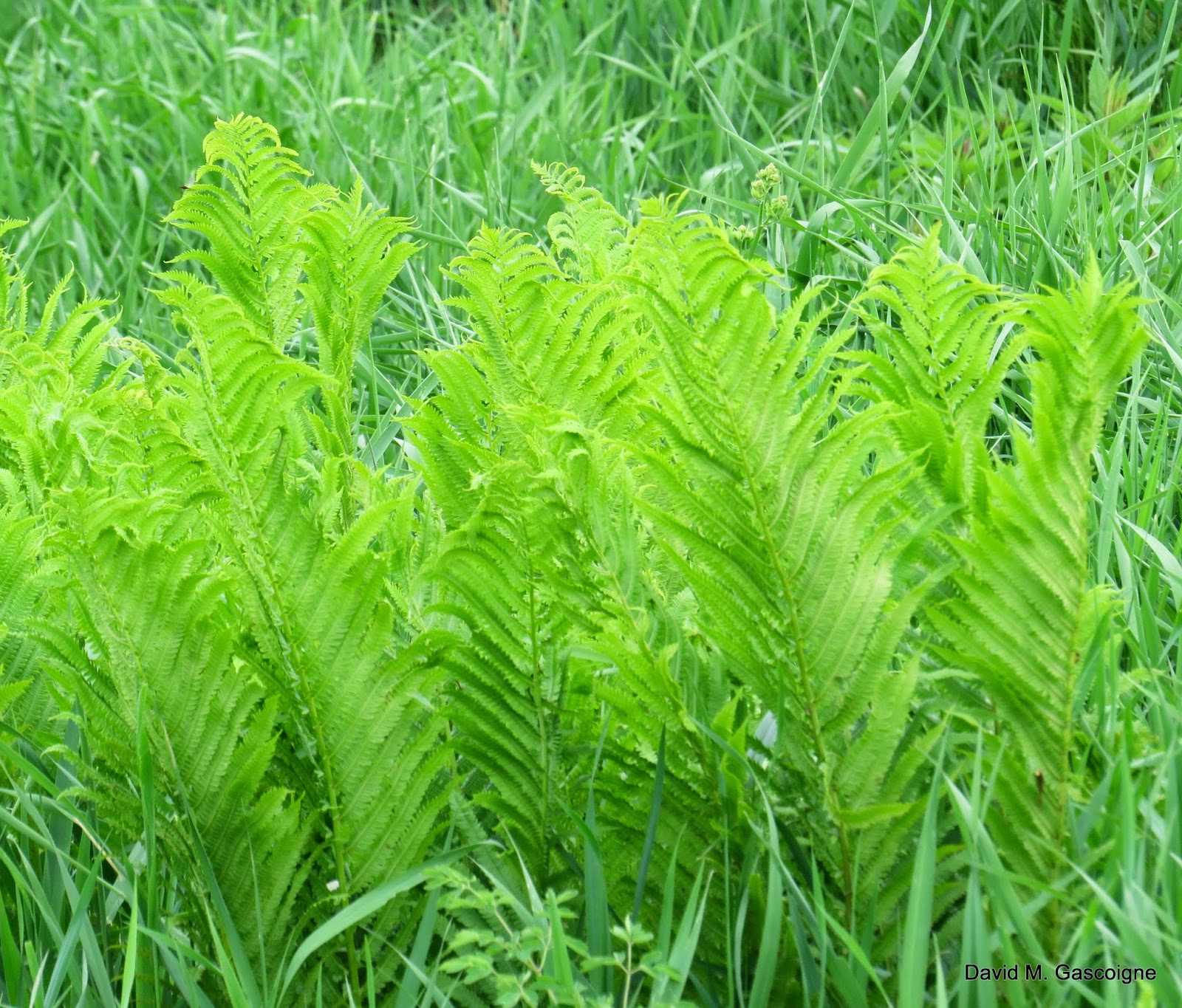 Common Milkweed Asclepias incarnata is critical to the survival of the Monarch Butterfly Danaus plexippus and it was encouraging for all of us to see a few plants in the meadows. Brian recounted that "blowing parties" have been organized when the seed pods are about to burst. Volunteers literally blow the seeds from the pods to disperse them as widely as possible to stimulate farther and more widespread densities of the plant. It bears repeating that this is the only plant on which a Monarch lays its eggs and it depends on the toxins provided by milkweed to bolster its defences. 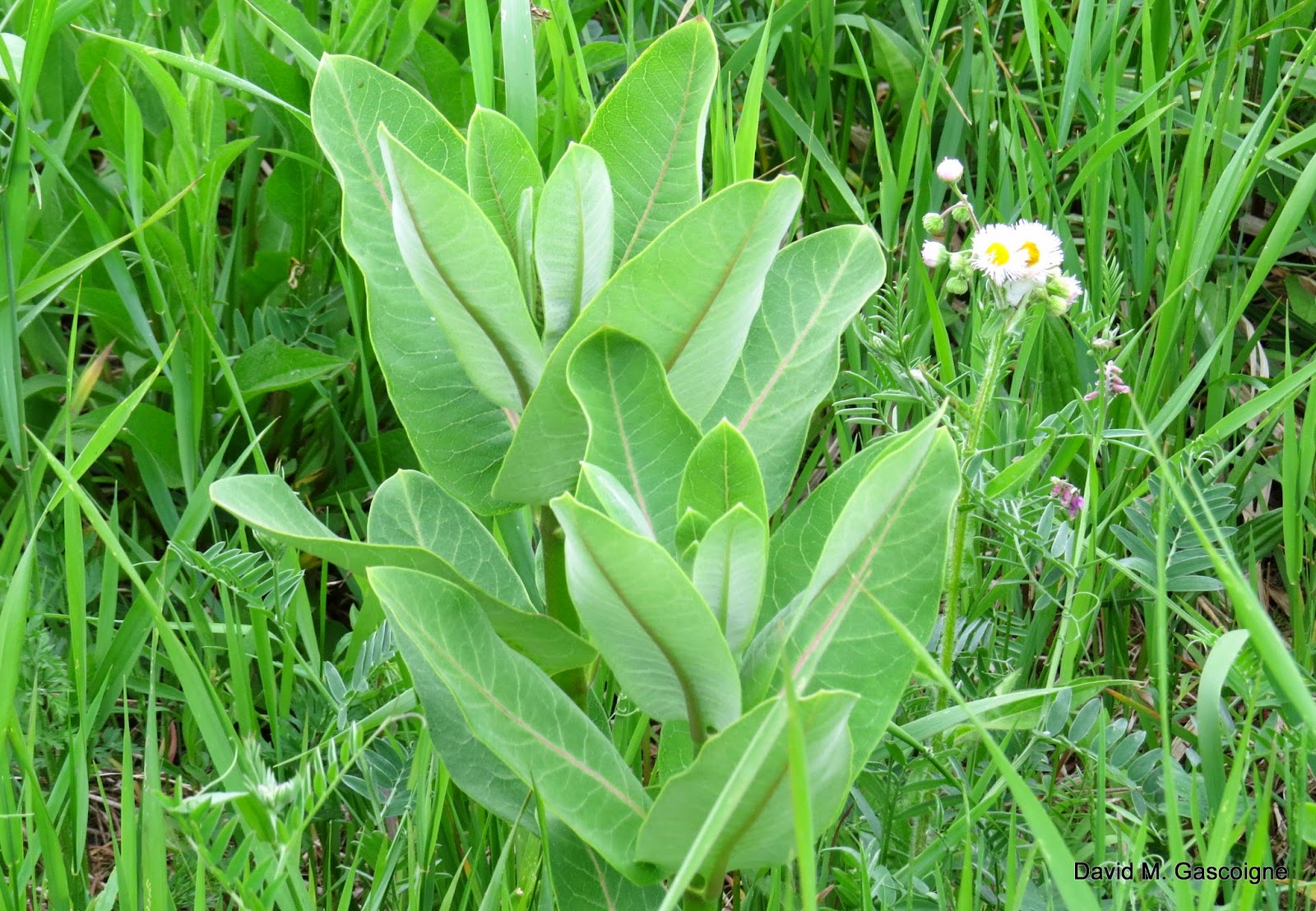 The whole area was filled with a wide variety of birds, but it would require more time and some dedicated effort to photograph them. This is not a very good picture of Cedar Waxwings Bombycilla cedrorum but it certainly was great to see them flycatching from the snags in the swamp. 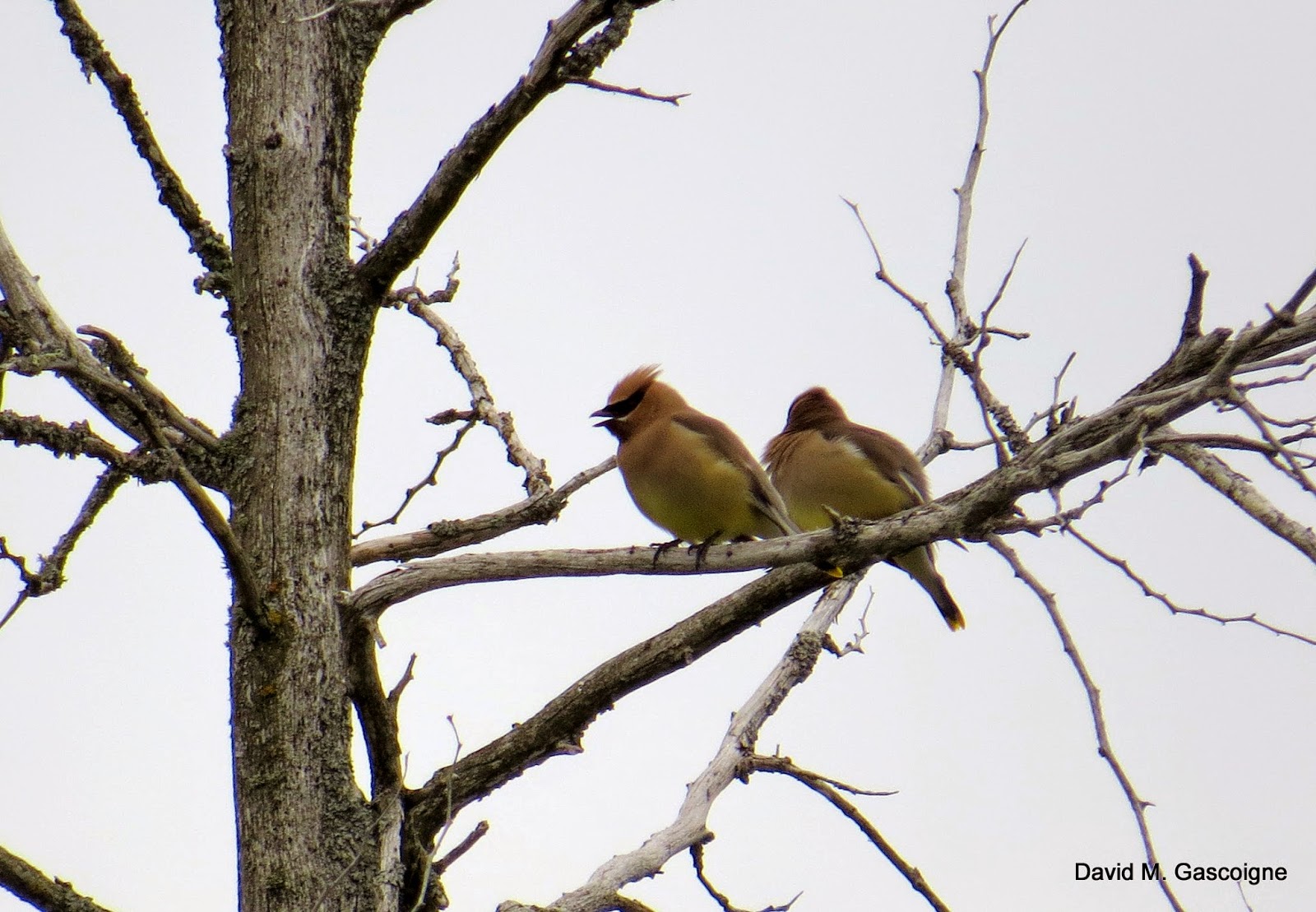 Part of this land is restored pasture and one of the meadows formerly contained a good deal of invasive Common Buckthorn Rhamnus cathartica. Once it takes hold this is a difficult shrub to remove and it was through the concerted efforts of about thirty volunteers over a two-day period that it was eliminated. It is very pleasing to see the amount of regeneration of native trees taking place, based on entirely natural seed dispersal. In twenty or thirty years this meadow will revert to the kind of forest that existed before European settlement in the area. 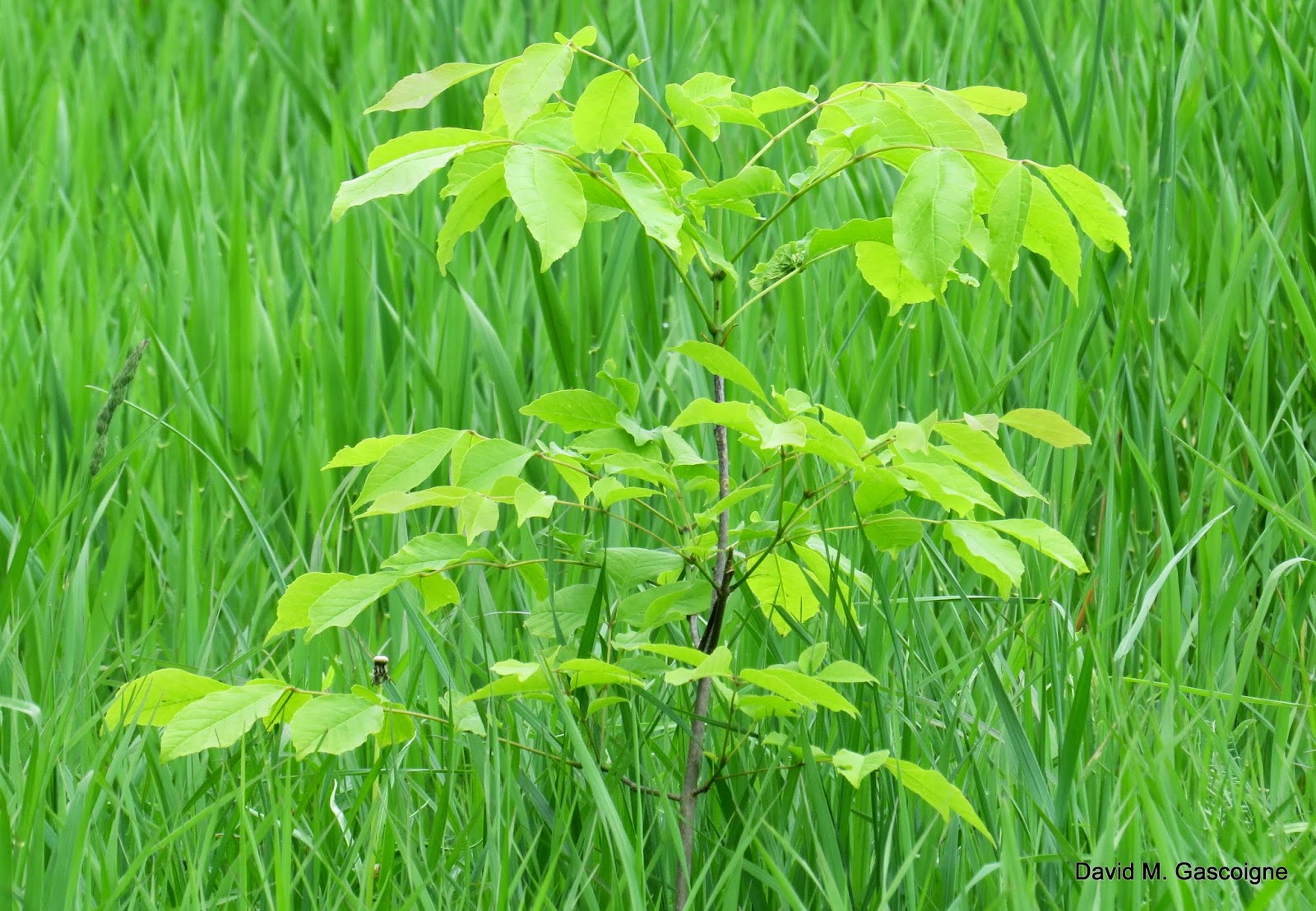 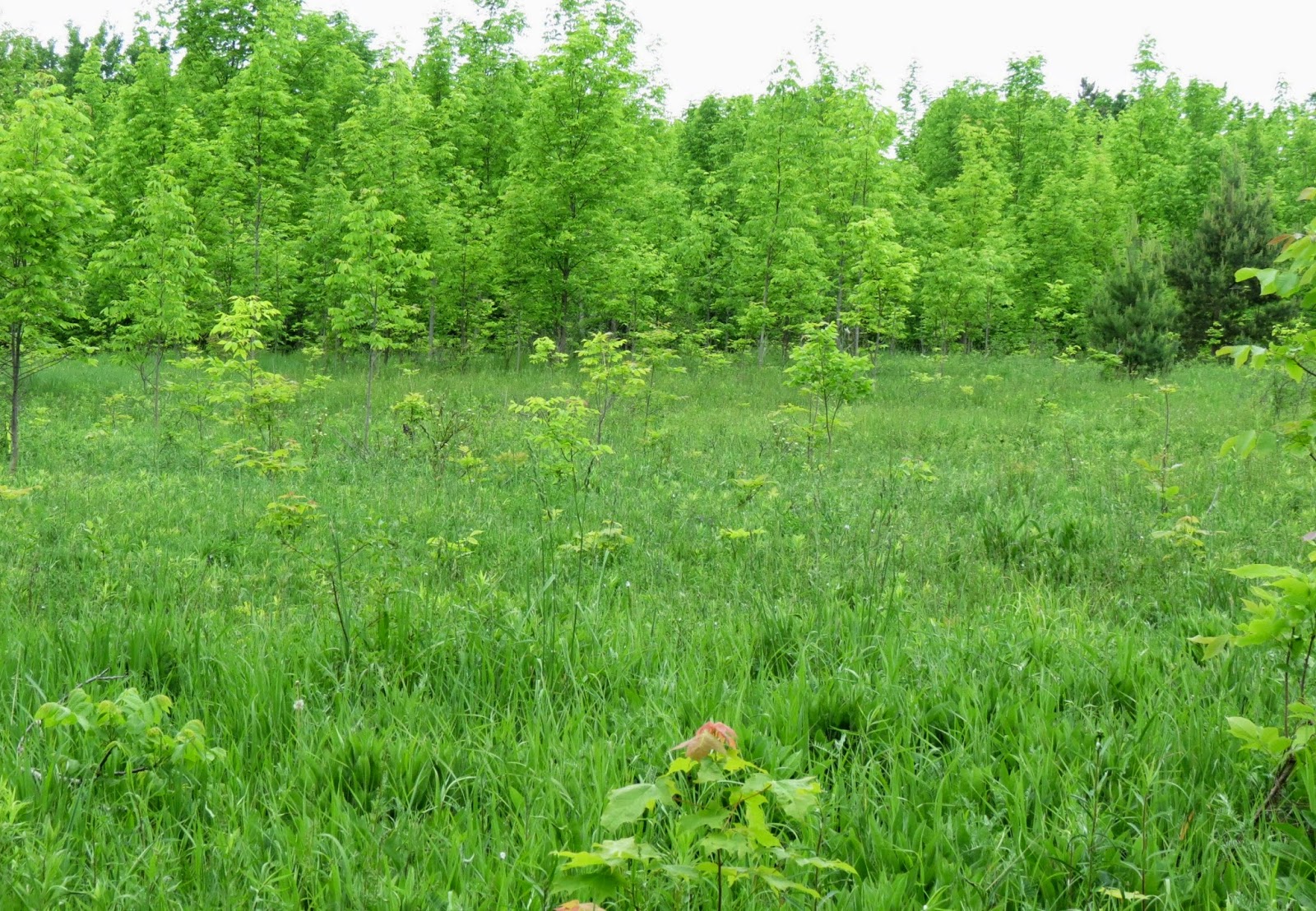 At the end of the walk it was time for Miriam to share the friendship of other members of KWFN who had made the journey north to take part in the celebration of this new reserve. Here she is with the ever irrepressible Marg Macdonald. 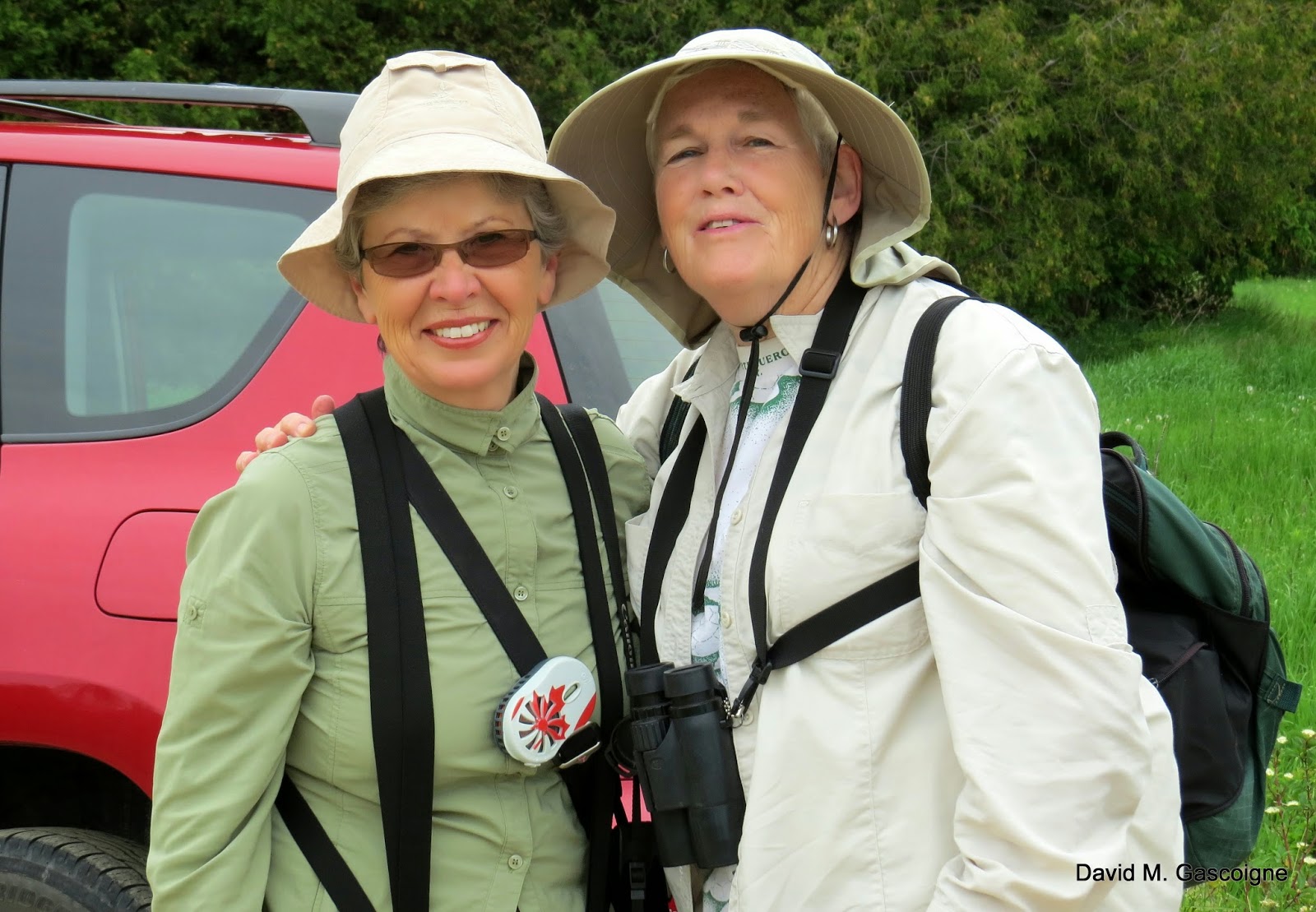 And with Mary Ann Vanden Elzen, one of the true stalwarts of the club. 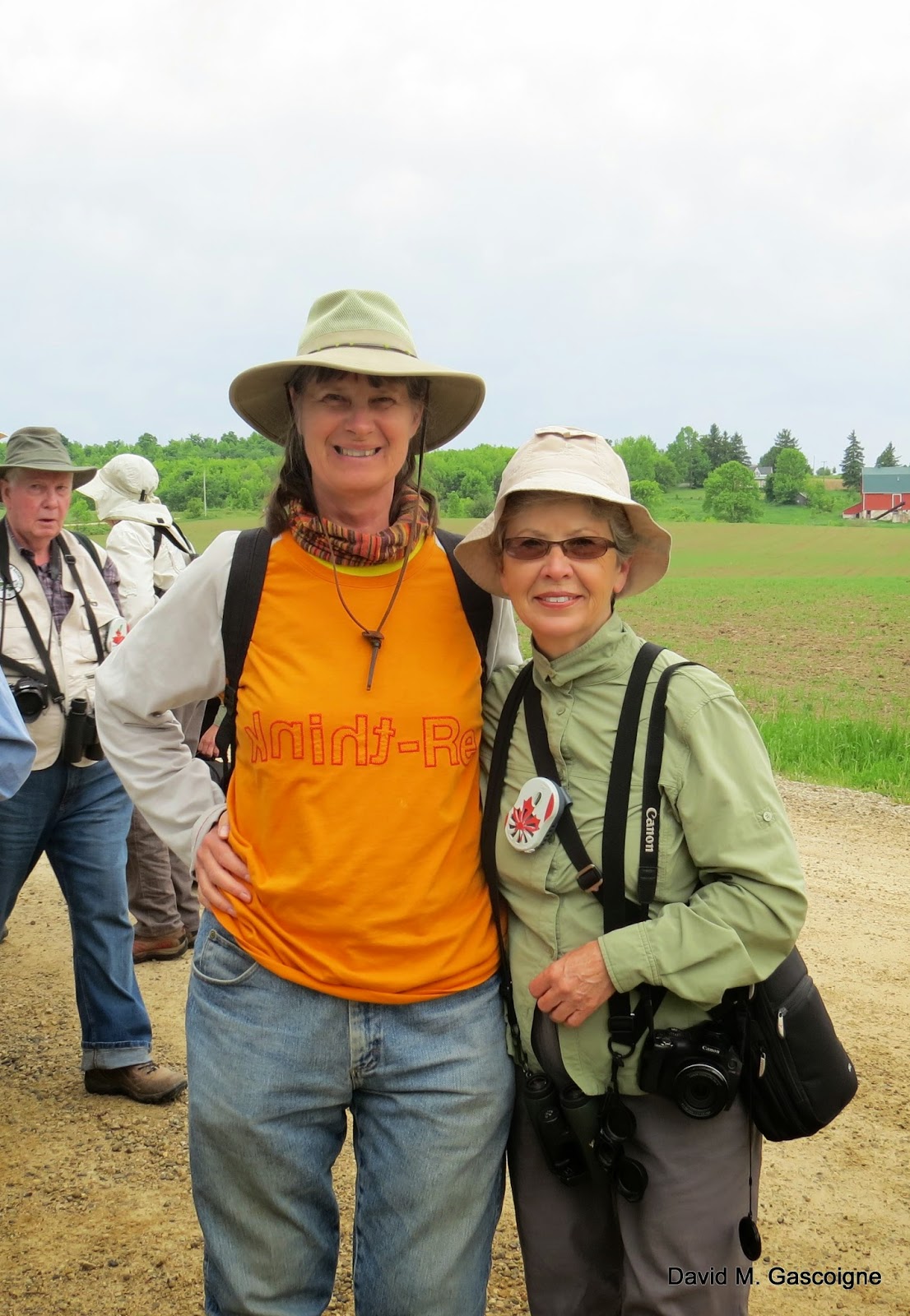 Delicious baked goodies were provided and a glass of sparkling apple juice to toast the new reserve and all the donors who made it possible. 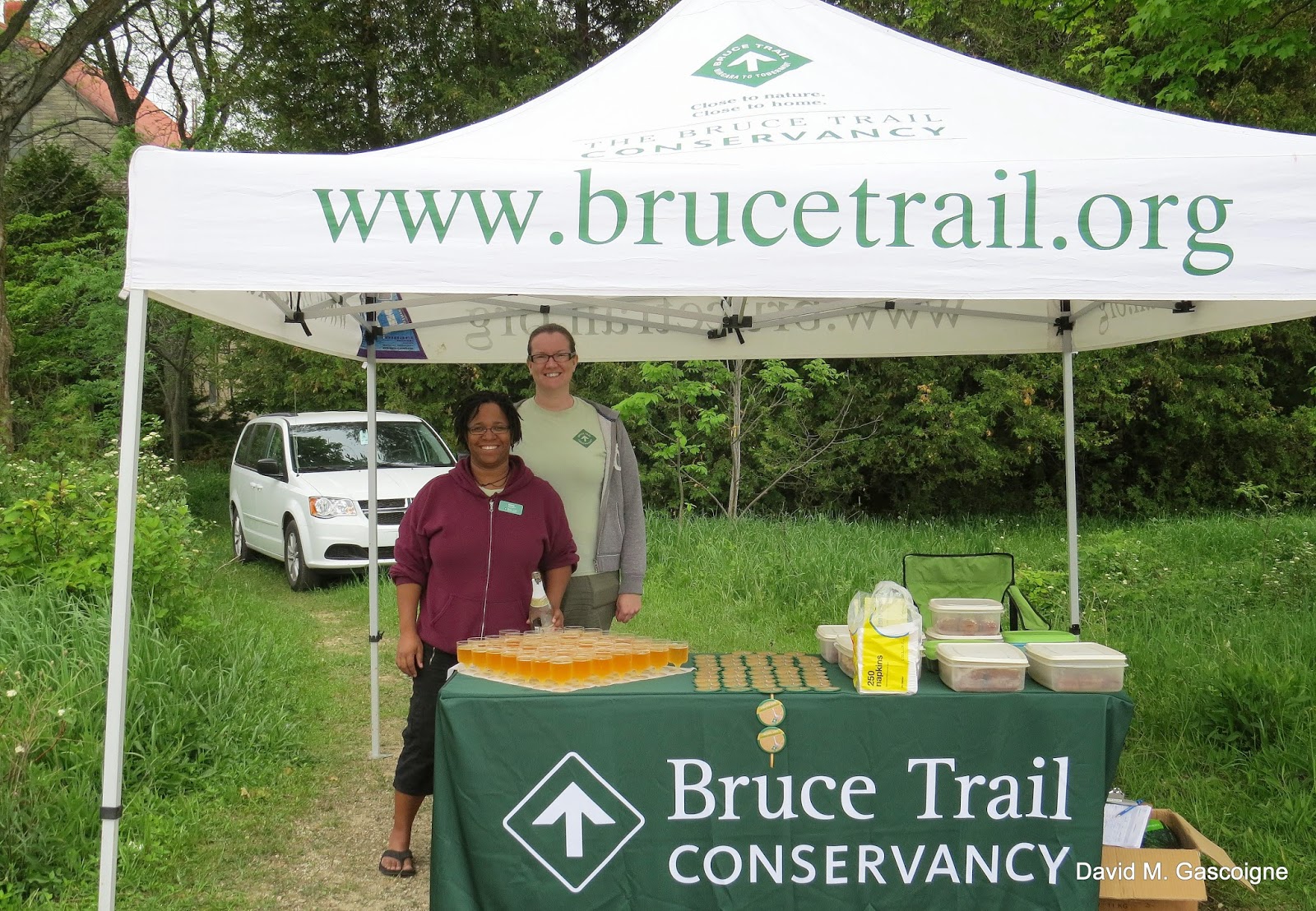 I confess to feeling a great sense of pride and satisfaction that our club, now in its 81st year, was able to contribute to making this day happen.
Posted by David M. Gascoigne, at 21:15